Corvids have been familiar to mankind for a long time. And their intelligence amazed our ancestors – it’s not for nothing that these birds are present in many myths and legends. Usually, crows symbolized wisdom, cunning, memory, they were the creators of the world and its destroyers. For their habits and culinary preferences, crows were often associated with death, they were credited with the ability to escort souls to the afterlife, bring misfortune and death. How justified is such an attitude towards crows? Here are some interesting facts about their abilities, and perhaps your attitude towards these birds will change a lot. 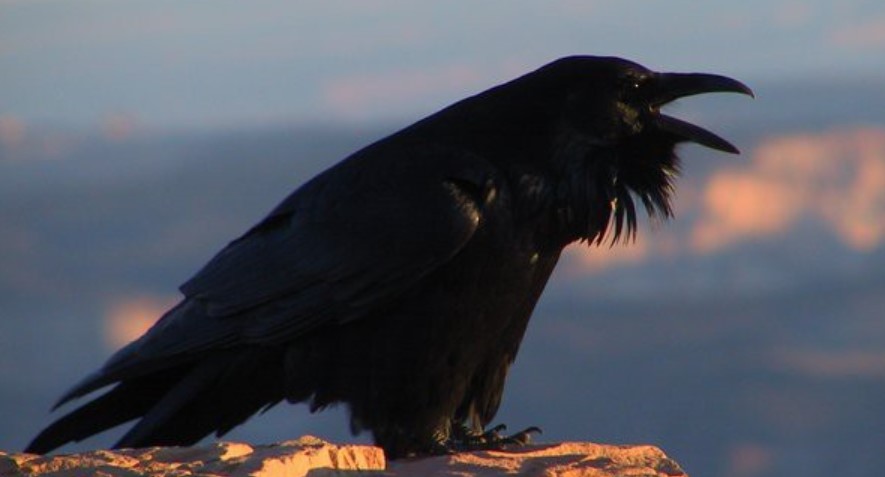 In Seattle, on college grounds, scientists conducted an interesting experiment. They caught seven crows and just tagged them. The birds were not harmed in any way, they just experienced some inconvenience and stress. After marking the birds were released. Yes, a small detail – the scientists who took part in the experiment were wearing ugly leather masks.
The idea was to test whether the birds are able to remember and then distinguish the faces of the people who attacked them. After all, an unprepared person will not be able to isolate one particular crow in a flock. The crows coped with the task.
The crows remember the face masks perfectly. They actively resented and attacked masked people. Moreover, after a while, the whole flock in full force dived at the “villains”. An interesting fact, the birds attacked not just people in masks, but people in those masks. That is, they distinguish between our faces, they can isolate the right person in the crowd and can attract their colleagues to the persecution.
By the way, without masks, scientists were of no interest to birds. It remains now to check, but do birds remember good deeds just as well? Well, at least it is safe to say that the memory and observation skills of crows are excellently developed.

Pass on the Covenant to Descendants

Returning to the previous experiment, it is worth once again emphasizing that the crows were able to somehow convey to their relatives a description of their offenders. No, here we can assume that the herd instinct worked – if one screams about danger and attacks, the others will do the same. But still, scientists have established that there are dialects in the crow’s caw. The “conversations” of ravens in different regions will be different. But whether they have a language is still difficult to say for sure….
By the way, it seems that certain information is transmitted from adult crows to their young children.

One of Odin’s ravens was called Munin (remembering). And it was not even in vain, the crows had an excellent memory. In the Canadian town of Chatham, there was a stopover for crows on their migration route. Hundreds of thousands of birds have occupied the city and the surrounding area. But this was an agricultural area and the surrounding farms suffered enormous damage – the crows greatly spoiled the young crops.
People were not going to endure and started a war. As a result, there was a victim, exactly one, only one bird for half a million alive. After this incident, the Chatham birds flew around. Naturally, there were no other victims in the city and the surrounding area.
There were many such cases. The birds remember very well the places and situations that ended in casualties on their part. They avoid these places, even change their migration routes.

Use of Scrap Materials

We are great at surviving in a comfortable environment. But what about those who find themselves in extreme circumstances? Then life depends on the ability to find a suitable tool, figure out how to use it to save the life of a loved one. But the crows have to solve such problems constantly.

The fact that animals often use various tools is not only known to scientists. The examples of chimpanzees will not surprise anyone. But many birds use sticks to extract from under the bark of insects, sea otters use stones to break mollusks, even dolphins use tools. Crows are no exception. Scientists installed cameras on them and watched how they deftly took out worms with sticks. What’s more, crows used hard leaves and grasses as tools to create other more complex tools!

Scientists to study the abilities of animals conducted many experiments, forcing them to solve situational problems. For example, a group of crows was placed in a cage with a piece of meat. At the same time, the meat was hung on a rope, which was fixed at the end of a stick. So the crows easily figured out to pull up the rope one by one, until they got to the longed-for piece.

There is a famous Aesop’s fable about how a crow threw stones into a jug to get to the water. It is unlikely that Aesop just came up with this situation. The scientists thought the same and decided to reproduce the events of the fable. And they did it with different crows four times and got the same results. A crow, a deep container of water, in which delicious worms floated, and a pile of pebbles were placed in the cage. The crows just couldn’t get the worms. The results are amazing – 2 crows managed to find a solution on the second try, the rest figured it out on the first try! At the same time, they did not begin to throw any pebbles but chose the largest ones. And they threw it exactly until the moment when there was an opportunity to pull the worms out of the rising water.

The next experiment involved, in addition to the crows, a small basket hidden in a larger vessel and a couple of wires. At the same time, 2 wires were prepared for Adele and Betty, one of which was with a hook, and the second was even. Abel immediately chose a bent one from 2 pieces of wire. Betty contemplated her straight line and neatly folded it over, too, and pulled out her basket. It is worth noting the interesting fact that the crows saw the wire for the first time.

The Art of Planning

And it’s not about flying. Ravens are able to calculate in advance the actions of others and adjust their own accordingly. The habit of crows to stockpile is well known to many. This, of course, can be done by many other animals. But the Ravens have gone much further in the art of measures and countermeasures. If one crow tries to hide something, there are several interested observers right there. Then the first, hiding, pretends to have just buried something, and at that moment she hides her good in her chest between the feathers. And quickly flies to another place. Observers quickly see through such tricks, they instantly lose interest in the place of “burial” and follow the real “treasure”. These races, competitions in a conspiracy can go on for a very long time and reach unprecedented proportions.

They Can Easily Adapt

Crows have learned to use the built environment for their own purposes. They know that the best way to break nuts is by tossing them onto hard asphalt. Moreover, they throw nuts not just on the ground, but also under the wheels of cars. Moreover, the speed of the vehicle is calculated. And then they know that it is possible to pick up a broken nut only when the traffic light is red, that cars are dangerous and in combination with certain external phenomena.

Crows also clearly know that you can get food from garbage cans. But usually, the tanks are tightly closed, but their contents become available after the arrival of workers and transfer to the garbage truck. So crows perfectly remember the schedules and routes of such equipment and use this knowledge.