Although the official time of the beginning of the breeding of the Karelian bear dog is called the 19th century, Finland, its ancestors, hunting huskies, lived in these parts long before not only Finland itself appeared, but the first map was drawn up. After all, just such dogs with erect ears and curled tails lived side by side with humans even during the Ice Age. We can say that this is the oldest form of domestic dogs. They hunted with them, they guarded human dwellings and grazed cattle. But, of course, no specific requirements were imposed on the appearance of the four-legged partners, their working qualities were much more important, therefore the exterior of the breed was formed spontaneously, fixing the most useful signs in itself.

Officially, black and white Karelian (and in fact Finnish) huskies were recognized in 1936, at the same time they were given the name “Karelian bear dog” since their main specialization was hunting for large forest animals: wild boar, elk and, most importantly, bear …

The Finnish War inflicted great damage on the breed, but 60 individuals were taken to the Soviet Union to restore their population. So today the Karelian bear dog (or as it is abbreviated as KMS) cannot be called very rare. There are especially many of them in Finland, but in Russia, hunters are happy to work with this strong and courageous husky. 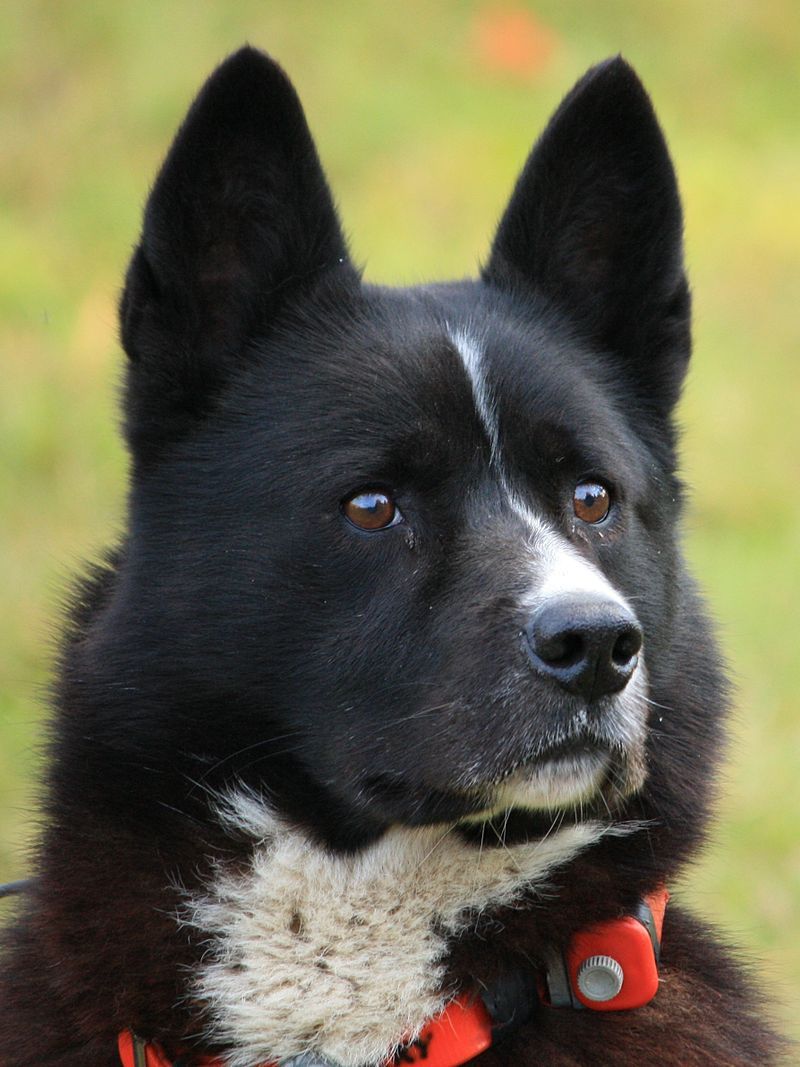 A medium-sized dog, heavier in structure than the Russian-European Laika, which at first glance looks very similar. The muzzle is wedge-shaped, moderately long and, like all huskies and Spitz, resembles the muzzle of a wolf. The eyes are medium in size, the gaze is intelligent and attentive. The ears are erect. The back is straight, the height at the withers is slightly less than the length of the body, which makes the format look a little stretched. The tail is set high, curled into a ring, and thrown over the back. The paws are strong. In general, despite its small size, it gives the impression of a strong dog that can really hunt a bear.
The coat is of medium length, dense, with a thick undercoat that perfectly protects against frost. The color is black and white, more precisely, black with white markings on the muzzle, chest, lower body, legs, and the tip of the tail. 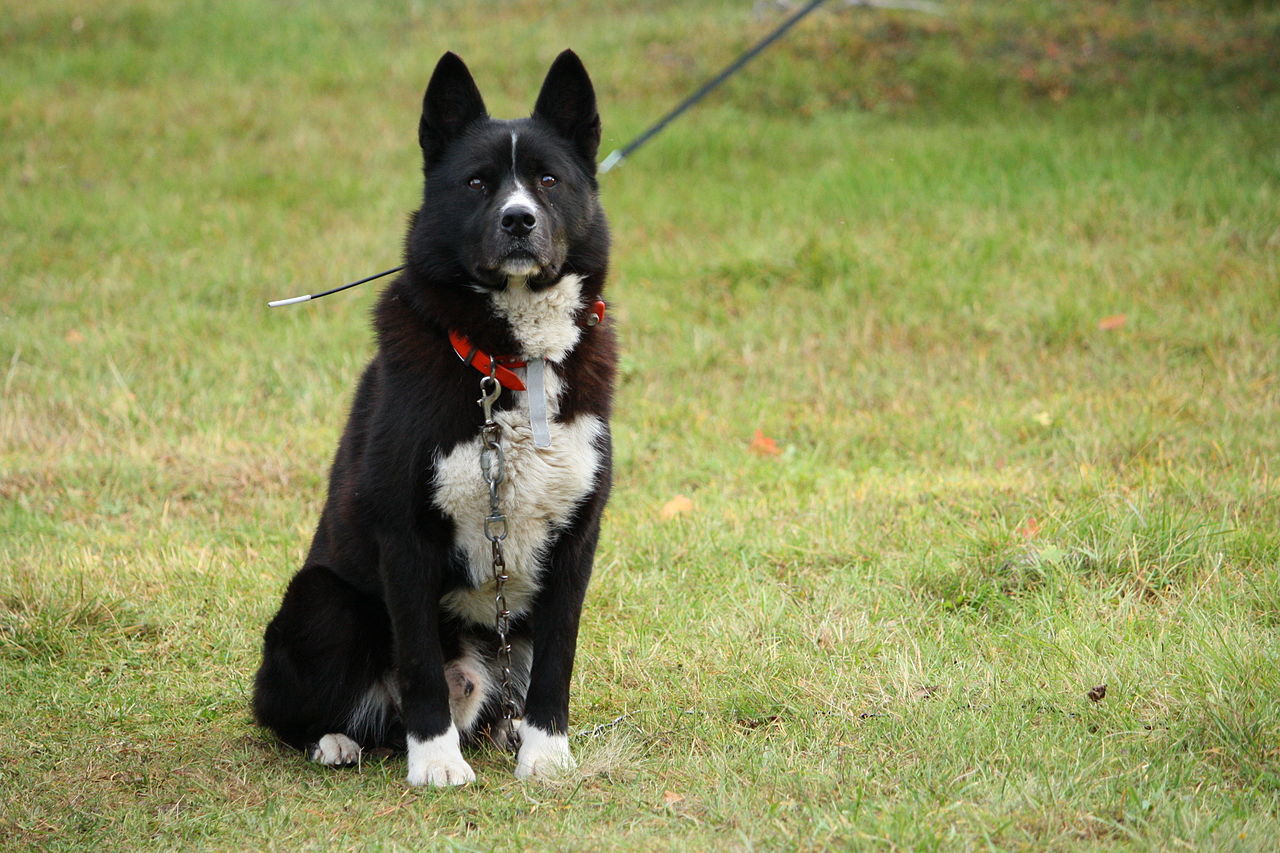 The Karelian Bear Dog, like its wolf ancestor, recognizes the leadership of one person. No, she will love her whole family, play with children and protect them from any dangers, but she will completely and completely give her devotion to the one and only master, one whose character is stronger than her own. At the same time, the CCM is a very friendly breed to people, therefore, as a watchman, it is not very suitable, unless it can warn the owners about uninvited guests by loud barking.

The hunting instincts of these huskies are very developed, so you should not start this breed if you already have any animals – a black and white hunter can see the game in them. At the same time, Karelian bear dogs are absolutely fearless, and it is this courage that helps them fight the most dangerous predator of northern Eurasia, the bear, many times larger than the dog in both size and weight, and emerge victorious from this fight. Possessing an independent character and an outstanding mind, on the hunt, the CCM cooperates with a person rather than serves him.

It is difficult to think of a more unpretentious breed than the Karelian bear dogs. They are absolutely not afraid of the cold, so they can live in the open air all year round (best of all, of course, in an aviary, but not on a chain), but they will also feel good in a warm apartment. Moreover, they do not need a soft mattress or a cozy nest – a rug on the floor will be enough.

Karelians are very hardy dogs that need great physical exertion, so you need to walk with them as much as possible, allowing the dogs to run freely without a leash. And, of course, they will be completely happy, working “in their specialty”, that is, having the opportunity to hunt.

Their thick coat needs to be combed out since dogs shed quite actively, but some of them do not need to be washed at all. 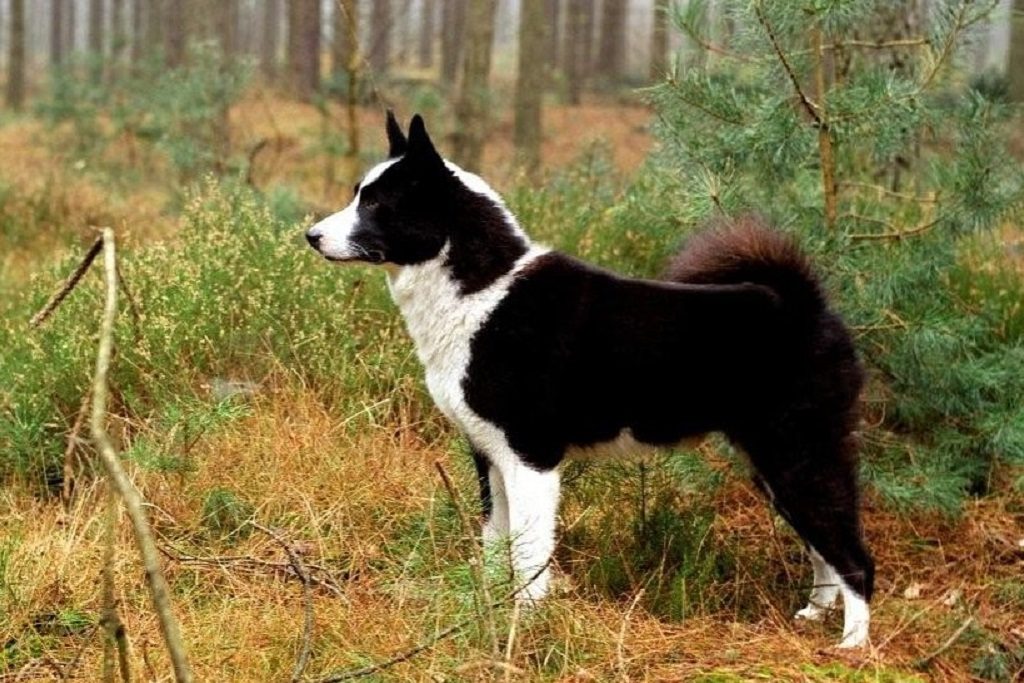 The Karelian bear dog is an independent and sometimes even stubborn person. She is firmly convinced that she herself knows how to act in any situation, and the owner should not tell her. Of course, if the situation is not changed in childhood, cooperation will not work. But for this, in no case should you use rudeness and physical strength – so you will definitely not achieve respect, but you will definitely bring up aggression towards people, implicated in insecurity and fear.

From early childhood, teach your dog to approach at the first call – this skill is necessary for hunting, and also start socializing the puppy from the first walks on the street. Let him understand that cats and other dogs cannot be regarded as a game, and strangers are not dangerous.

Karelian bear dogs have excellent health, so they rarely get sick, especially if all vaccinations are done on time. Particular attention should be paid to treating the dog from ticks because in the northern forests this is a real disaster. It is also worth deworming regularly, since these huskies, like all hunting dogs, tend to pick edible pieces on the street.

Dysplasia of the joints and gastrointestinal problems are worth mentioning from the diseases that can still happen in the CCM. But they rarely suffer from allergies.