The Komodo dragon is a champion among lizards in size and disgusting eating habits. We present to your attention interesting facts about the largest modern representative of the squamous order on Earth.

Today, the Komodo dragon lives only within the Malay archipelago, on the islands of Rincha, Padar, Flores, Gili Motang, Gili Dasami, and Komodo, which are part of the Lesser Sunda Islands group. These pieces of land are united in the Komodo National Park with a total area of ​​about 603 km2. The natives of the islands call the lizard “Ora” or “Boyya Darat”, which translates as “land crocodile” – and this name fully reflects the essence of the giant monitor lizard. The Komodo dragon is a large flat-headed lizard with a strong, muscular body, a long tail, and powerful clawed paws. 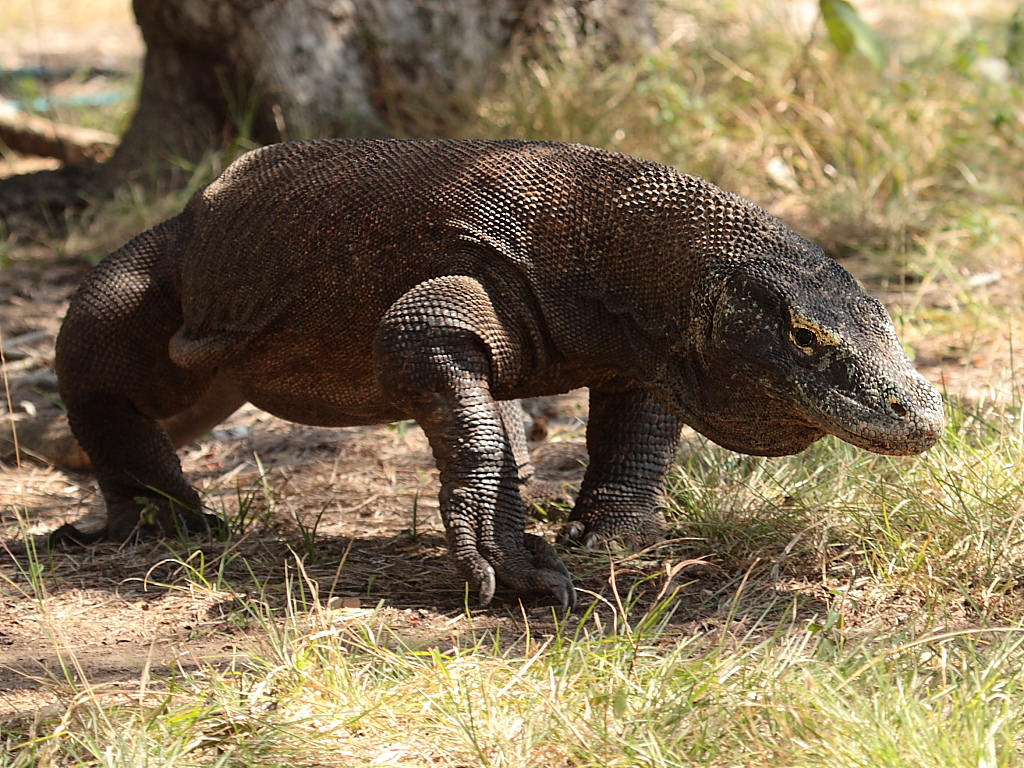 The body length of males varies from 2.25 to 3 meters and weighs from 70 to 90 kg, however, there are also champions. The largest known specimen of the Komodo dragon was registered at the St. Louis Zoo: with a weight of 166 kg, its body length from the tip of the nose to the tip of the tail was 3.13 meters. As a rule, males look noticeably larger and more muscular than females: females weigh about 70 kg and reach 2.3 meters in length. Previously, it was believed that the Komodo dragon is an example of the phenomenon of island gigantism. However, during the study of the evolution of lizards, this point of view was rejected: it turned out that giant monitor lizards originated on the mainland and only then migrated to the islands. In addition, the study of the fossils showed that the Komodo dragon quietly coexisted with other large predators, without experiencing a shortage of resources, which is contrary to the nature of island gigantism.

By the way, the difference in size is almost the only manifestation of [email protected] dimorphism, so even specialists sometimes find it difficult to determine the [email protected] of a giant monitor lizard. The coloration of adults is rather the same type – the skin reinforced with osteoderms usually has a dark brown color with small yellowish blotches. A more varied color can be observed in young monitor lizards: their bodies are covered with much more pronounced and bright red-orange and yellow spots. 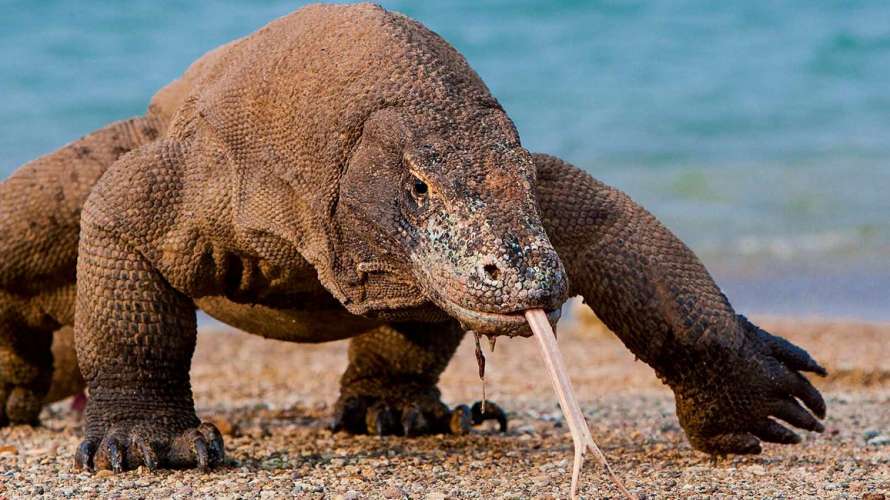 In its range, the Komodo dragon is a tertiary consumer – a predator at the top of the local food chain. From a young age, giant monitor lizards hunt insects, small rodents, reptiles, and birds. Upon reaching the age of five, these lizards switch to more impressive prey: large rodents and reptiles, monkeys, goats, wild boars, deer, and even their relatives. Although the Komodo dragon is capable of speeds up to 20 km / h, the basis of its hunting technique is waiting in ambush and powerful attack. The monitor lizard can spend several hours at the animal path, waiting for its prey before attacking it, knocking it down with a directed blow from its fleshy tail. Often, crippled prey manages to avoid death at the time of the attack, however, if it gets at least a few bites, death is inevitable. When bitten, dozens of species of bacteria enter the victim’s wounds with saliva, as well as a special poison that acts as an anticoagulant and does not allow bleeding to stop naturally.

Until the wounded animal dies, the Komodo dragon will pursue it with its extremely sensitive sense of smell. Located in a long, mobile, forked tongue, olfactory receptors allow monitor lizards to locate a victim with a bleeding wound from a distance of more than 5 kilometers. The special structure of the olfactory system of monitor lizards allows them to analyze the composition of the air for the corresponding odor molecules for various animals. Moreover, the difference in the concentration of molecules associated with a particular prey on the two tips of the tongue allows the lizards to determine the direction of the location of potential prey. If the recipes on the left tip have captured more molecules of the desired scent, then the prey is on the left side. The Komodo dragon also has quite good eyesight: the lizards can see objects located at a distance of up to 300 meters. The retinas of monitor lizards are dominated by cones, which allow them not only to distinguish colors but also to perceive rapid movements.

At the end of the hunt, as a rule, the Komodo dragon shares a meal with several fellows. Giant monitor lizards do not hesitate to eat the skin, internal organs, bones, and even hooves, leaving no more than 12% of the victim’s body. In addition, they often do not mind eating rotten meat. The peculiar structure of the musculoskeletal system of the jaws and neck allows the monitor lizards to absorb large fragments of prey at an incredible speed. As a rule, prey is eaten about 10-25 times faster than in the case of other predators of similar size. At the same time, lizards are able to absorb up to 80% of their own body weight in one meal. In case of danger, the animal can regurgitate the contents of its stomach so that excess weight does not interfere with its escape. After a meal, the Komodo dragon always licks its lips thoroughly and cleans its muzzle on the ground.

The social structure of Komodo dragon populations is based on a visual hierarchy: the largest individuals are the first to gain access to food, often attacking their own younger relatives. Outside of the breeding season, which occurs between May and August, giant monitors prefer a solitary lifestyle. Due to the quantitative predominance of males, the fight for females takes place in the form of severe ritual battles. After mating, females set up natural incubators for 20-30 eggs, from which cubs hatch after 8-8.5 months. The Komodo dragon is also able to reproduce by parthenogenesis: due to the higher viability of Z-chromosomes (male sex chromosomes), exclusively male offspring can appear from unfertilized eggs. Presumably, this breeding method is due to the island habitat of monitor lizards. In particular, if, as a result of a storm, the females find themselves thrown out to one of the islands of the archipelago, they will be able to establish a new colony without the participation of males.

When hatching, the Komodo dragon cubs weigh less than 100 grams with a body length of about 40 cm. Young monitor lizards spend the first years of their life in tree crowns: there they avoid encounters with older brothers and other predators. By the age of five, the lizards grow up to 2 meters and weigh about 25 kilograms: at this age, they become strong enough to hunt for larger prey and resist adults. Komodo dragons continue to grow little by little throughout their life, which lasts about 30 years in the wild.