Lhasa Apso is a dog breed bred in Tibet. The monks considered the Apso a talisman that could warn of impending danger. Lhasa is the capital of Tibet, and “Apso” is a word that is translated from Tibetan as “bearded.” Accordingly, the direct meaning of the breed’s name is “a bearded dog from Tibet”. There is also a version that the words “Lhasa Apso” mean “like a goat”, and it may be that this breed first found its calling as a shepherd of domestic goats in Tibet. 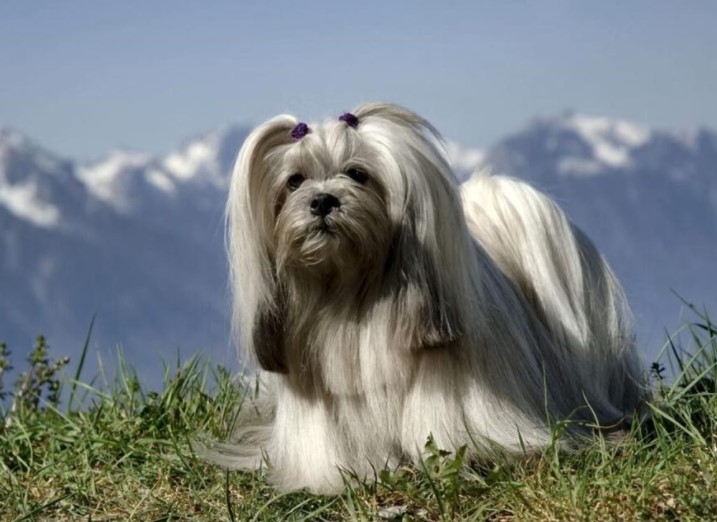 Lhasa Apso was bred by Tibetan monks many centuries ago. They were used as companions and sentries in temples and were highly valued and protected. For a long time, the Apso was isolated from the outside world, and only a few left the monastery as an expensive gift to dignitaries.

Some experts believe that small Tibetan Terrier puppies, which were unsuitable for herders’ efficient work, became the foundation for the breed. Genetic studies have suggested the presence of family ties of Lhasa with another ancient Chinese breed of Shih Tzu. In any case, they appeared by natural selection in the harsh climate of the highlands.

For a long time, no one guessed about Tibetan bearded dogs’ existence; for an attempt to export valuable animals from the country, the death penalty was punishable. In England, breeding outside of Tibet began at the turn of the 20th century, when British explorers and interventionists, returning from Asia, brought the original trophies.

The first description of dogs from Tibet under the name “Bhutan Terrier” in 1901 was made by Ser Lionel Jacobs. The unusual name reflected the fact that small working dogs were brought in from the Bhutan area. The First World War interrupted the development of dog breeding. In 1935, Colonel Bailey, a member of the political mission in Tibet, again took up the Lhasa breeding and developed a standard. The Dalai Lama personally presented to the military two males and a female, who became the first British lines’ founders.

It is Bailey who is the author of the new name for the breed – Lhasa Apso. It was chosen to preserve the history and geography of its origin. Lhasa first appeared at an exhibition in London in 1929. Bailey’s friend, American, received a similar gift from Lama, only his dogs went overseas and gave rise to the American Hamilton line. AKC officially registered the breed in 1935. The FCI adopted the breed in 1954. The dogs from Tibet gained particular popularity in 1984 when they became the best at the Crufts show. 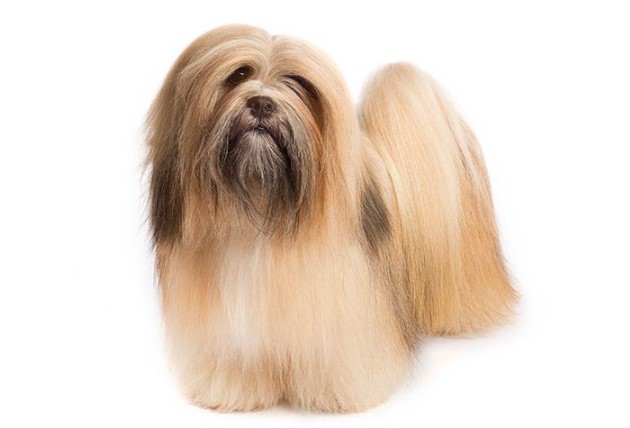 The Lhasa Apso is a small, well-balanced dog with a strong build. The Lhasa Apso is very luxuriously dressed with an abundance of all kinds of colors. Height 25-28 cm, weight 4-8 kg. Males are noticeably larger and more powerful than females.

The physique is elongated, well-balanced, and compact. The back is straight. The chest is broad, the ribs are well sprung and directed backward. The limbs are well-muscled. The forelegs are straight, the shoulder blades are set obliquely. Hind legs well angulated, hocks parallel when viewed from behind. Feet with firm pads, rounded. Movements are free and light. The tail is set high and thrown back.

The coat is very dense and double, consisting of a moderately dense soft undercoat and dense, straight, coarse hair (neither silky nor fluffy). The color can be almost any, but preference is given to golden, its shades, and combinations. 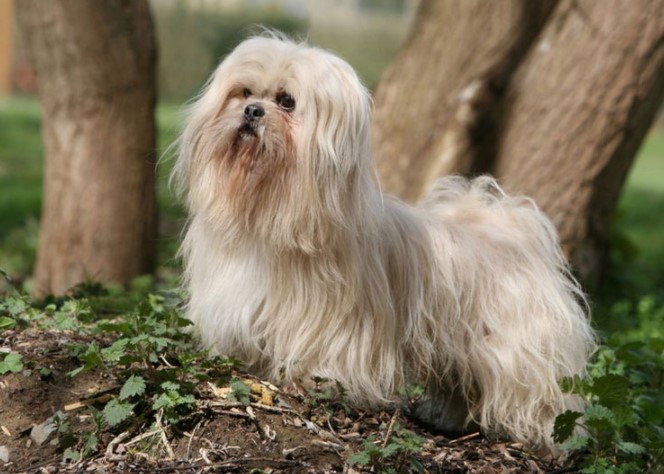 In vain, many are misled by the toy dimensions of these four-legged pets, Apso does not consider himself small and others should not perceive them as exclusively decorative pets. Lhasa is suspicious and cautious, insightful and empathetic, sociable and communicative, feels the mood of the owners, and adjusts to the pace of family life. They are quite resistant to stress, easily tolerate travel, transportation, and change of scenery, quickly adapt to new conditions. At the same time, some are touchy, stubborn, and even jealous. By nature, they are independent and try to be leaders; they often put their desires above the goal of bringing joy to the owner. They endure short loneliness well. They treat everyone in the family with respect.

This breed is characterized by the qualities of both decorative and guard dogs. Cheerful, friendly, and non-conflicting, they are wary of strangers, always notify with a sonorous bark of any changes, and are brave enough to rush to defense if necessary. They often unmistakably recognize a person’s biofield and his intentions. Young children are rarely tolerated. They do not like rudeness and when they are teased. They may snarl or even bite if the child is too persistent. Therefore, if you are looking for a breed that is 100% suitable as a toy and nanny for a toddler, Lhasa may not be the best choice. 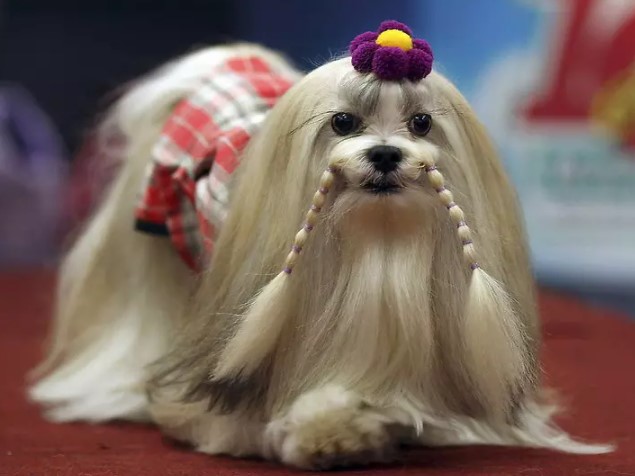 Long coarse coats are prone to tangling. You need to comb your pet daily. The Apso is bathed about once a month. It is recommended to use professional shampoos for this type of coat or breed. After bathing, balms and conditioners are applied, and the coat is dried well with a hairdryer. Regular grooming will greatly facilitate taking care of your pet. The eyes, ears, claws, and mouth also require care. The eyes are examined daily, wiped if necessary. Make sure that the hair does not fall on the cornea. Drop ears should always be dry and clean. Brush your teeth at least once a week. The claws (if they are not ground down on their own) are cut, maintaining the optimal length. 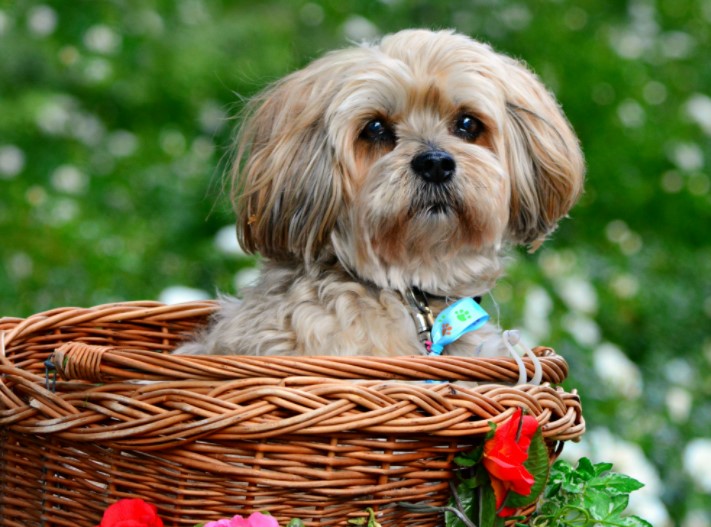 Lhasa Apsos have excellent health and a strong immune system, and thanks to a high-quality fur coat, they are not afraid of cold or drafts. In comparison with other decorative dogs, they are very strong, but they also need timely vaccination, deworming, and treatment against external parasites. The average life expectancy is 12-15 years.

Nevertheless, several characteristic hereditary diseases and a predisposition to certain diseases are distinguished in the breed: