In addition to peaceful shrimps, in aquariums, you can often find species that are quite aggressive towards their neighbors. Among them, the most popular shrimp from the genus Macrobrachium. In our article, you will learn how to properly keep these funny crustaceans, and why they are called “big-armed”.

Macrobrachium  Is a genus of shrimp from the order of Decapod crayfish? The name of the group is translated as “big-armed” and reflects their main feature – strongly developed pincers on the first pair of legs, which serve the shrimp to grab food or hold a sexual partner.

The genus is unusually wide and includes more than 200 species, differing in size and body color. Some representatives (for example, Macrobrachium Rosenberg) are valuable commercial species. Dishes made from their meat are served in many Asian restaurants as a delicacy. The size of such shrimps can reach 15-20 cm. 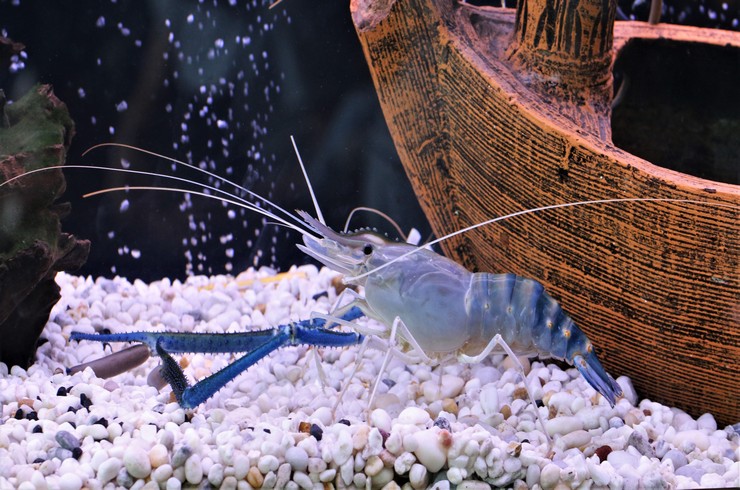 Some of the smaller species are great for keeping in aquariums and are generally straightforward. Although some behavioral features must be taken into account.

Macrobrachiums are territorial shrimps. If a group of shrimps is kept, then there will necessarily be a dominant male who will regularly defend his “title” by engaging in fights with other males. Therefore, a group of weaker individuals without one or even both claws in aquariums with macrobrachia is not at all uncommon. Shrimp are especially vulnerable during molting when the new shell has not yet matured. A large aquarium volume and adequate shelter can help reduce the likelihood of conflicts.

Macrobrachium shrimps belong to the order Decapod crayfish and have a body structure typical of crustaceans. It consists of two sections: the cephalothorax and abdomen. The first is covered with a dense shell, walking legs are also located here, as well as elongated claws that grab prey and deliver it to the mouth opening, where it is crushed by powerful jaws. The claws can be either the same size or differ from one another.

Swimming legs, or pleopods, are located on the abdominal segments. They serve as an organ of movement, and in females, an additional place for attaching eggs. The abdominal region ends with a wide fan-shaped caudal fin. 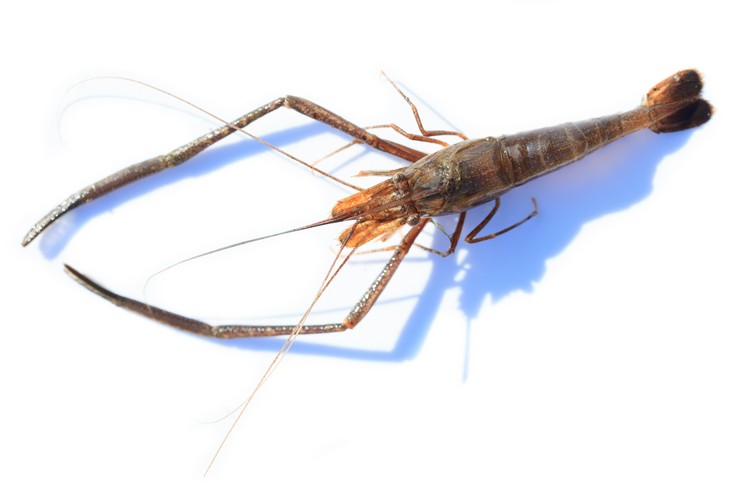 The sense organs are represented by the eyes (shrimp’s vision is rather weak) and antennae, with which the shrimps “feel” the world around them.

Body length can reach 25 cm, but most aquarium species rarely grow more than 10 cm. The colors are unusually varied, but blue, black and yellow are predominant.

Crustaceans have a dense outer skeleton of chitin. To grow, they need regular molting – shedding the old skin, under which is a new soft, soon hardening. Young individuals molt frequently, every 2-3 days. Adult shrimps are much less common: females – once a month, males – once every six months.

Shrimps from the genus Macrobrachium have a very wide habitat since they are found not only in freshwater bodies but also in the seas and oceans. You can find them off the coast of Australia, America, India, the countries of Southeast Asia, Japan.

Macrobrachium shrimps are most often used as aquarium shrimps, the size of which does not exceed 10 cm. The aquarium for keeping these crustaceans should have a volume of at least 15-20 liters per individual. It is worth remembering that shrimp are territorial, so the larger the bottom area, the better.

Natural pebbles are usually used as soil. It is very important that there are many different hiding places at the bottom. In them, macrobrachiums will be able to calmly sit out the molt. 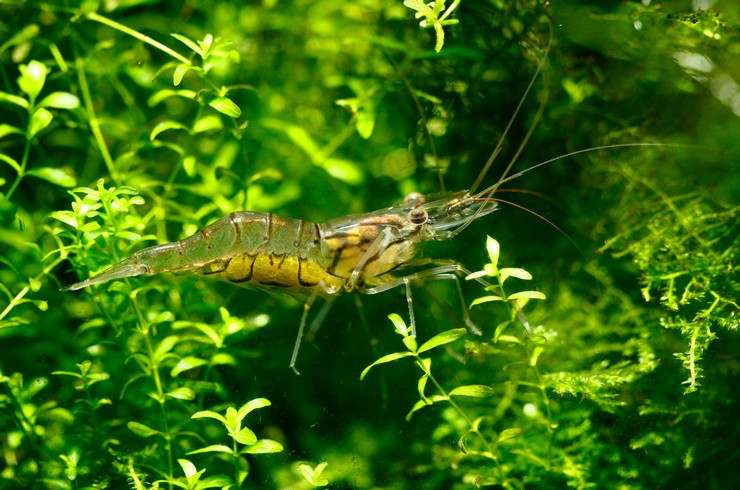 These freshwater crustaceans are very fond of clean oxygen-rich water. It is imperative to install a suitable filter with an aeration system or a separate compressor in the aquarium. Change up to 20% of the tank volume once a week.

The lighting should not be very bright, partial shade is best. To observe the nightlife of macrobrachium shrimps, it is advisable to set up an aquarium with a lamp with a special night mode.

As for the parameters of the water, it is recommended to pay attention to the acidity (it is most optimal if the water is neutral because in such conditions molting is best) and the temperature – tropical crustaceans prefer water 23-27 ° С. The total hardness should be between 6-15 DH.

Macrobrachiums are territorial shrimps and do not differ in particular habitability. With enough aquarium space, they can be kept in a group, but there will be a rigid hierarchy in it. One male will be dominant, usually the largest. Constant clashes over territory and position in the group are quite common for these crustaceans.

Compatibility with other types of shrimp is mixed. Basically, it is not recommended to add macrobrachiums to smaller relatives, because the latter can become a victim of large neighbors. Although there are also cases when macrobrachiums completely do not pay attention to the “trifle” under their feet. Most often, hungry macrobrachiums show aggression, so it is important to feed these voracious crustaceans enough. 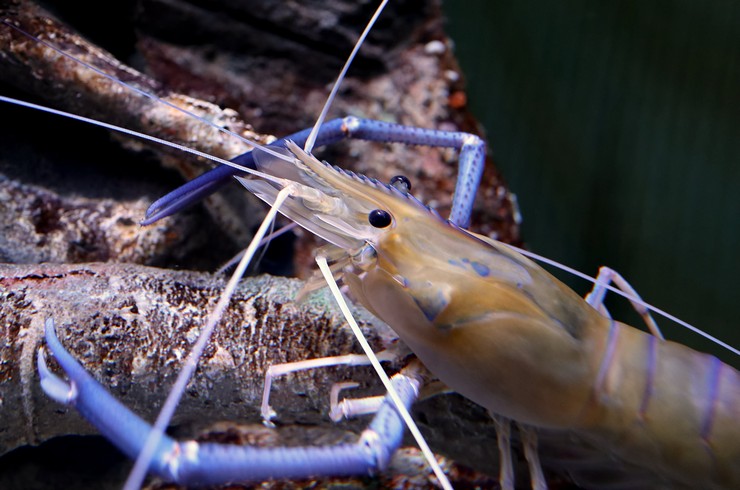 As for the fish, most of them will be too tough for “long-armed” shrimp, although clumsy attempts to catch neighbors will definitely be present. It is best to focus on active species that occupy the upper and middle parts of the aquarium, for example, zebrafish, mollies, iris, barbs. Veil fish should be excluded, their long fins will be mercilessly plucked by shrimps. Caviar, fry, and small snails are also at risk.

Macrobrachiums are omnivorous shrimps with an excellent appetite. It is recommended to feed them 3-4 times a day, as hungry shrimp will take an unhealthy interest in the neighbors in the aquarium.

The Tetra Crusta specialized shrimp food is the best choice for full growth and development. Their main feature is quality components and balance. It is known that feeding exclusively with animal food leads to an intensification of growth, shrimps have to shed more often, which does not have a very good effect on their health. High-quality dry food contains both animal and vegetable products, as well as a complex of vitamins for good health and longevity of crustaceans.

It is worth noting that macrobrachium shrimp are capable of eating up some types of algae, for example, filamentous. In this case, living plants are usually not damaged. 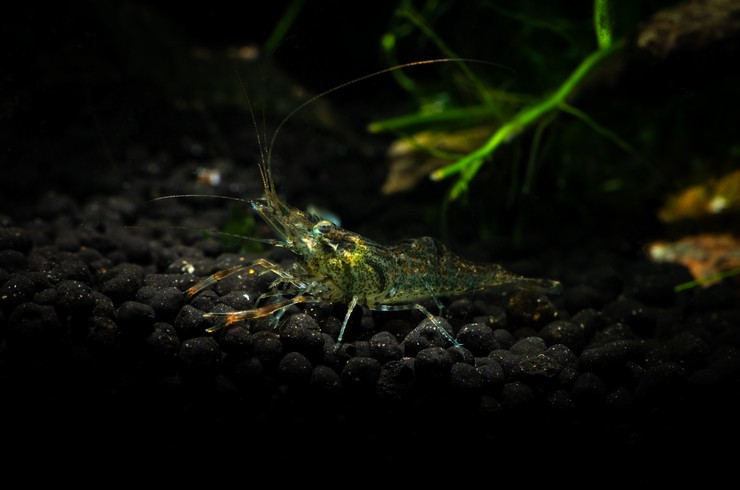 It is quite possible to get offspring from macrobrachium shrimp at home. Difficulties arise only with species whose larvae develop in saltwater. Shrimp become sexually mature at the age of about six months. Only the strongest male has the ability to mate with a female, therefore, during the breeding season, especially fierce fights are observed between them, in which, as usual, there are combat losses of limbs and claws.

The male, who won the fight, finds the female following a special trail of pheromones and mates with her, holding her with the help of the same long claws. After a week, the female lays large, rounded eggs up to 1.5 mm in diameter in a secluded place. Then it attaches them to its abdominal legs (pleopods), where they remain until the young shrimp hatch. This allows for better preservation of the offspring, and the constant movements of the legs create a constant stream of water around the eggs.

After about a month, young shrimps are born, which immediately go in search of food. At first, it is pasture but has already reached a size of half a centimeter, young shrimps begin to hunt. At this time, they have increased growth, in a month a shrimp can grow by one centimeter.

Adult macrobrachiums can easily feast on their offspring, so if possible, it is recommended to transfer juveniles to a separate aquarium, where the shrimp grow up without danger of being eaten.