The Maine Coon is a large and interesting cat breed with origins covered in many myths and legends.

These pets are loved by many for the following reasons: they are characterized by amazing strength, and, in turn, gentle character and grace. Maine Coon cats have an unusual color, fluffy coat, and wonderful tassels on the tips of the ears. 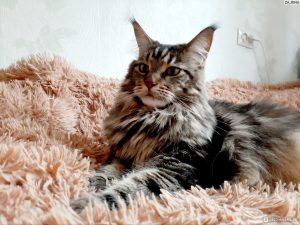 One of the myths says that the Maine Coon cat is a fruit from the crossing of a female raccoon and a cat. In support of this legend, they say, in particular, the external features – the color and the long bushy tail very much resemble the appearance inherent in the raccoon. No wonder the name of the breed is literally translated as “Manx raccoon”.

According to another legend, Maine Coon kittens appeared as a result of crossing the North American lynx with a farm rat cat. Tassels on the ears, which have become one of the distinctive features of this breed, support this theory. It is believed that the Maine Coon kittens inherited these tassels from their lynx mother.

The theory associated with natural evolution seems more realistic. The climatic conditions of the region where the animals come from are rather harsh, especially in winter. Indeed, in such conditions, only large and hardy cats and cats with long fluffy hair could survive. In especially cold periods at night, animals wrapped themselves in their voluminous fluffy tails. 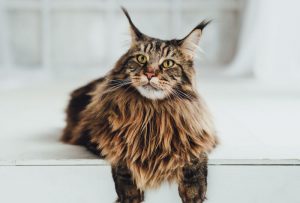 The Maine Coon breed began to form about 200 years ago, and the first show Maine Coons were introduced in New York and Boston in 1861.

For a long time, Maine Coons were ahead of such breeds like Siamese, Persian, Oriental in popularity. The large North American cats looked a little rustic and bore similarities to the Siberian and Norwegian forest cousins. Over time, interest in the breed diminished for a while, but the farmers managed to maintain the phenotype of the animals.

Soon Maine Coons began to enjoy success again, they began to be exported to different countries and actively exhibited. In the second half of the twentieth century, a real boom of Kuno began. Maine Coon cats and cats began to take root in Europe.

Maine Coon is a large, muscular pet with a powerful physique and a kind obedient character.

The headline is square, with large ears set almost vertically. They have a long, muscular, rectangular body.

The average weight of Maine Coon cats is 8-10 kg. In appearance, they resemble a “wild beast”, but in nature, they are kind and affectionate. Moreover, Maine Coon cats, when properly kept, practically do not mark their territory.

If you want to know how many years these pets grow, then the information is as follows: animals do not develop quickly and are finally formed by 3-4 years, and the life expectancy of giants is 15 to 20 years. 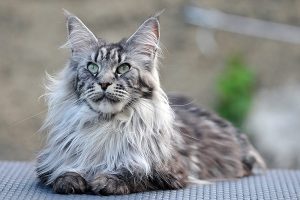 What is the difference between “American” and “European” Maine Coon?

Currently, two types of Maine Coons are conventionally distinguished – the classic American and the extreme European. Both directions adhere to the preservation of the basic characteristics of the breed but slightly differ in details, which is enshrined in the standards of different systems.

In the American direction, it is possible to renew blood by participating in the breeding of aboriginal cats, which makes it possible to avoid hereditary diseases that accumulate over time in the genotypes of pedigree animals. The modern American Mainecoon is the unchanging heir to its northern hunting ancestors.

These animals retain the status of the “national breed” assigned to the Maine Coon. Therefore, many breeders are jealous of the preservation of true “raccoon” traits in future generations.

Here are some of the differences between the American style of Maine Coons: 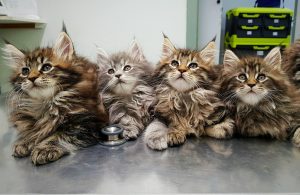 The external signs of these cats clearly distinguish them from others, which is the fundamental argument in favor of purchasing a kitten of this particular breed.

And the reviews of the owners of Maine Coons reinforce the desire to make such a wonderful friend in the house. How else to surprise a big Maine Coon cat and his girlfriend – a cute big cat.

The outdoor games of these large pets will not disregard any owner, because due to their large weight, their pranks look quite humorous.

To say that these animals are always ready to help, no matter what you do. Curious and cute, they don’t live up to their large size at all.

Many people think that Maine Coons can offend, but this is not so. These cats never release their claws unnecessarily, they are friendly, affectionate, and very gentle.

Active and very playful Maine Cookies will never let you get bored and lend themselves well to education.

These cats love spaciousness at a height, so try to provide them with this comfort in an apartment (house) by buying a semblance of a tree (by making it with your own hands). When buying (producing) such a tree, do not forget to take into account the weight of the animal; the structure must be stable and functional (a place to rest, climb and sharpen claws).

Adult cats of this breed are quite lazy, they are observers, whose curiosity has no limits. Sometimes it seems that they know much more about everything that is “going on” in the house than you do.

These cats are well-mannered and have a sense of their own dignity. They will never encroach on someone else’s bowl and will not steal food from the table, they will not ask for alms.

Another interesting feature of this cat is its extraordinary “talkativeness”. Yes, you heard right, these cats do not meow, they make sounds similar to human ones. There are many expressive intonations in their “speeches”. 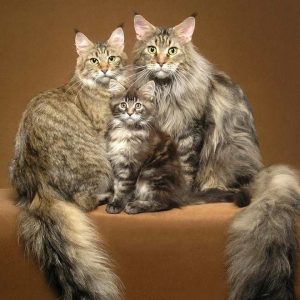 Keeping these cats at home is not very difficult, as even their thick coat does not require careful grooming. Care and maintenance of these “raccoon lynx” are very simple.

The silky coat (undercoat) of the Mainecoon does not fall off, so combing the cat is not difficult. Performing this procedure is impassable once a week (this is usually enough). A beautiful fluffy tail requires special attention.

Carefully monitor your friend, not forgetting about the ears and claws, bathe and comb on time, then you will live a long and happy life with him.