The Maltese Lapdog or Maltese is one of the first decorative dogs known in the world. The main pride of the breed is its snow-white, long hair. But this is not the end of her merits. These are very intelligent dogs with an attentive look and a sense of their own dignity, who know how to sincerely love their owner. 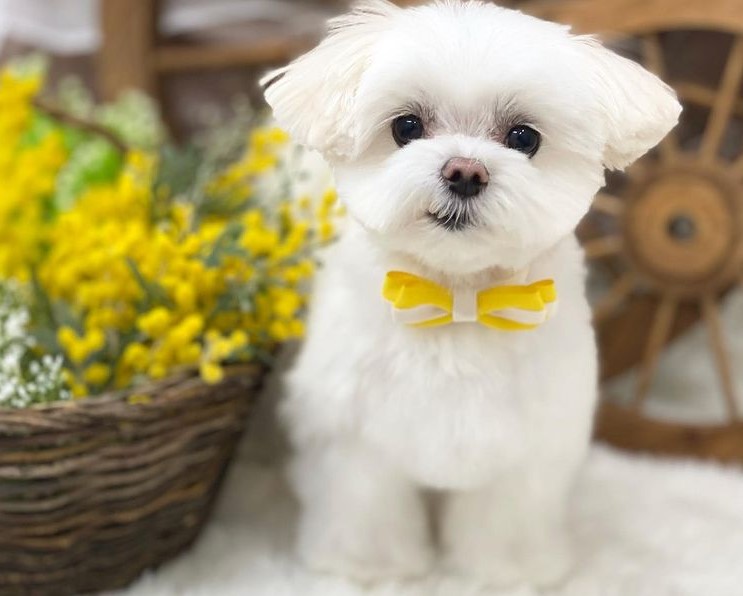 The fact that the history of the origin of Maltese is rooted in the distant past is beyond doubt. But where exactly these dogs first appeared, one can only guess. Graphic images of dogs similar to a Lapdog have been found in the tombs of the Egyptian pharaohs. It is known that the Maltese were the favorites of the Greek nobility and respected animals in China. Another version says about their Tibetan origin, and according to another – and their homeland is the island of Malta.

The modern history of the breed began in the 19th century when the dog with an unusual appearance presented at the exhibition made a splash. For some time the breed was called “Maltese Terrier” because they saw in these dogs hunters for rodents, but when in 1904 the breed was officially recognized, it was decided that it would not be attributed to either Terriers or Spaniels. 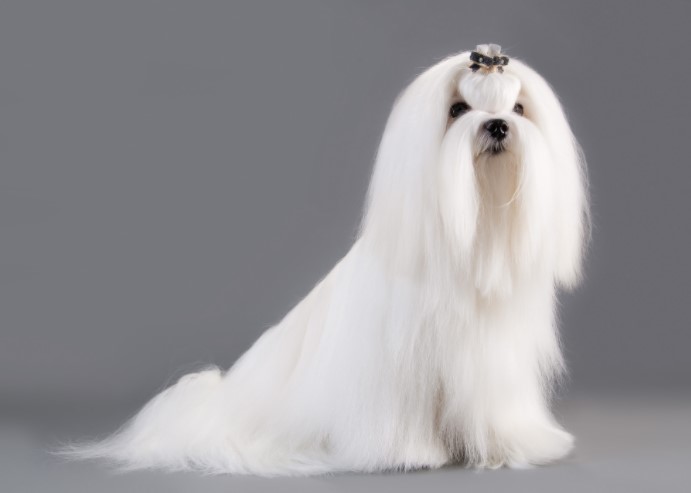 The appearance of the Maltese is very typical – these are small decorative dogs with an elongated body and white long hair. Maltese growth – up to 25 cm, weight – up to 4 kg. The muzzle is straight with a well-defined forehead protrusion. The ears are set high, triangular in shape, hanging down. The eyes are round, slightly protruding, set straight. The color of the eyes is always dark, like the lobes of the nose. Scissor bite. The teeth are well developed and white.

Body length is one-third longer than height. The chest is voluminous. The croup is wide. The back is straight. The fore and hind limbs are set parallel, the musculature on them is poorly outlined. The tail is set high, tapering towards the tip. A curved tail in a dog is not considered a defect.

The coat is silky, long and dense, flowing, does not split into strands, and does not form curls or waves. Dogs have no undercoat. Color – snow-white, allow a pale shade of ivory. Maltese dog. 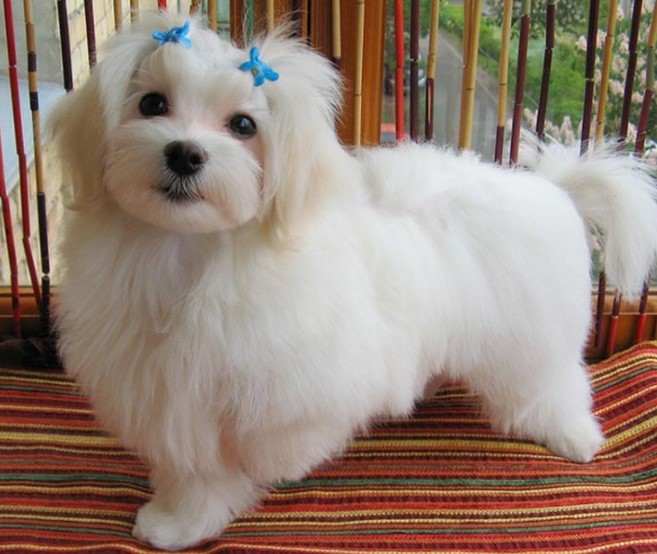 The character of the Maltese is affectionate, cheerful, and playful. These dogs are always full of enthusiasm and energy with sudden bursts of activity. But most of all, they love attention and try to always be close to the owner, whom they sincerely love. Maltese cannot stand loneliness and cold attitude at all. If necessary, they will defend the family.

Maltese dogs are sociable, friendly, and accommodating. For the caress and attention of the owner, they will respond in kind. Many dogs are very difficult to endure even a short parting with the owner, but if you properly teach the baby to stay alone from childhood, in the future there will be no problems with barking or whining. Lapdogs require a lot of attention, regardless of what the owner is doing, the dog will always be there, play, sit, in general, spinning at his feet. They are rarely overly intrusive or capricious. Strangers are treated with apprehension, which is expressed by a sonorous bark, and sometimes by a desire to bite. The psychological portrait of the Maltese, as a breed, may not fully correspond to the temperament of an individual dog. 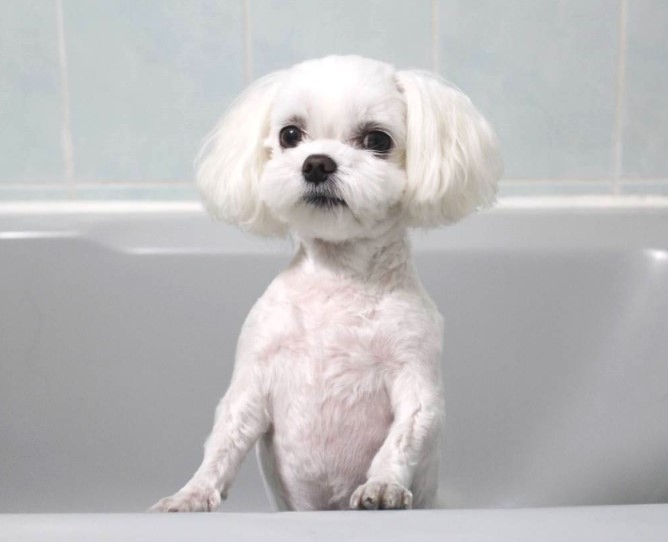 The Lapdog is an exceptionally decorative dog, but at the same time, the representatives of the breed are not as delicate and fragile as they might seem. These dogs are agile, hardy, and adapted to various climatic conditions. Malteses are very clean and easily trained to go to the toilet in one place.

It is in the care that the main difficulty of keeping this dog with long, flowing hair lies. The Lapdog is combed daily or twice a day. The main task of the owner is to prevent the hair from rolling into tangles. Often, the knocked down wool can no longer be combed and it is necessary to cut it, which affects the appearance. You often have to bathe the Lapdog, this is the only way to preserve its attractive whiteness. After water procedures, the pet needs to be dried well, first with a towel, then with a hairdryer.

Special conditioners and haircuts will significantly facilitate combing. If you do not spare money for expensive, good cosmetics, care will be much better and easier. Once a week, the dog’s ears are cleaned, the hair is cut in the ear canal and between the pads of the paws. Caring for your Maltese also includes washing your eyes daily and dusting your tear lines. Every day, and sometimes several times a day, the dog will have to do his hair, respectively, you will need various hairpins and rubber bands. 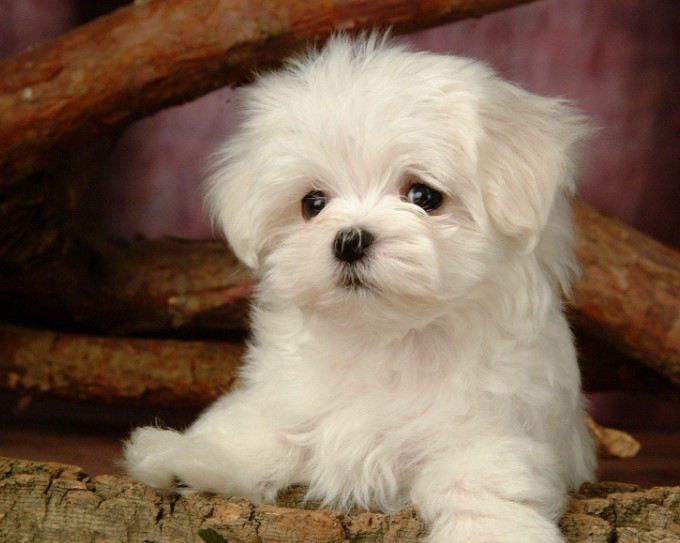 With all the vaccinations, proper nutrition and maintenance, the absence of helminths, fleas, and ticks, you can not be afraid of the health of the Lapdog. Life expectancy is 13-15 years. On rare occasions, dogs suffer from infectious or other diseases. After 8-9 years, age-related diseases often begin to appear, but, unfortunately, there is no escape from this. Also, the breed has a genetic predisposition to a number of diseases: