Manx are unusual cats with the appearance of a rabbit and a rounded fluffy tailbone. Charming, good-natured, and calm creatures, they are distinguished by complaisance in dealing with people and pets. These pets easily become attached to the owner and feel the need to communicate with him. 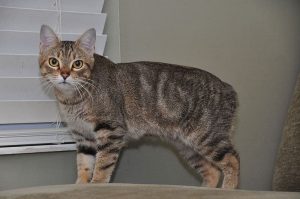 Despite their unusual appearance, Menks are excellent hunters, dexterous and nimble. One of the most important conditions for admitting this breed to exhibitions in the presence of a clearly perceptible depression at the beginning of the tail in cats.

The Manx cat breed originated on the Isle of Man. A feature of the Manx cats is the absence of a tail, although, in reality, not all representatives of this breed are tailless.

In tailed Manx cats, tail length can range from a short “stump” to a tail of almost normal length. The absence of a tail is the result of natural mutation.

Felinologists have developed a clear gradation of the expression of the tail in the Manx.
Rumpies are cats that are completely devoid of a tail, a riser is a rudimentary tail in the form of a tubercle, a stumpy is a short but visible tail, a stubby is a tail that is shorter than the usual length for cats, and long is a tail of a standard length. It is forbidden to breed rampikes with ramping – their offspring do not survive. 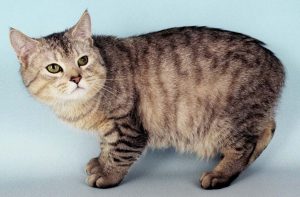 The Isle of Man has a population of tailless cats for over a century. So, references to these animals were found in local historical chronicles of the 18th century.

The inhabitants of the island came up with many legends explaining how the charming creatures lost their tail, however, the real reason for such a mutation, most likely, was closely related to crossbreeding, because the island population of these pets was practically not replenished from the outside.

The Manks have received state recognition – the figure of a tailless cat was captured in 1970 on the reverse of a one-crown coin.

Manx cats are clean and do not require special care. The short, but the dense coat of the Manx is advised to comb out regularly two to three times a month. During the shedding period, she needs additional care, namely, stroking with wet palms to remove shedding hair.

Since the absence of a tail is the result of a genetic mutation, kittens of this breed can develop serious spinal diseases in the early stages of development.

A tailless cat can bring both tailed and tailless kittens in the litter. Crossbreeding of two-tailed cats. And only tailless individuals are allowed to participate in exhibitions, tailed cats of the same breed are used inbreeding. Recently, crossing the Manx with the representation of other breeds has been practiced.

The work of breeders is carried out in two directions: preserving the preserved taillessness and eliminating genetic abnormalities that negatively affect the health of the pet.

Purposeful breeding work is underway with the Manx to improve their variety – the long-haired Manx cats called the Kimrick.