The Mekong Bobtail is a native cat breed from Southeast Asia. The pet has a calm, affectionate disposition and loyal.

The Mekong Bobtail is a shorthaired and short-tailed cat. An elegant strong animal with a friendly character. An inquisitive pet becomes attached to all family members, gets along well with children, taking on the duties of a “housekeeper”. Despite its exotic appearance, the Mekong Bobtail does not require complicated care and is very healthy.

The breed has a number of “canine” habits, which attracts many buyers.

The cat becomes attached to the owners, loves communication and tactile contact.

The Mekong Bobtail feels great as a sole pet, at the same time it gets along well with cats and dogs. By virtue of instincts, a bobtail will definitely open up a hunt for a rodent, bird, or fish.

Representatives of the breed get along well with babies and do not show aggression, therefore they are suitable for families with children.

Mekong Bobtails are long-lived. With proper care, cats are able to delight you with their company for a quarter of a century or more, while they retain the ability to reproduce almost until the end of their lives.

Southeast Asia became the birthplace of the Mekong bobtails. The breed was named after the Mekong River flowing in Thailand, Myanmar, Cambodia, Laos, Vietnam. The word “bobtail” means having a short tail. Initially, cats were called Siamese, then Thai, and only in 2003 they were named the Mekong, so as not to be confused with other breeds. One of the earliest descriptions of these cats belonged to Charles Darwin, who mentioned them in 1883 in his work “Changing Domestic Animals and Agricultural Plants.”

At home, the breed was considered royal. Thai bobtails lived on the grounds of temples and palaces. For a long time, protecting the breed, the Thais prohibited the export of cats. Mekong bobtails left the country very rarely and only as especially valuable gifts. Recipients included Nicholas II, British Ambassador Owen Gould, and Anna Crawford, the governess of the Siamese king’s children. The breed came to Europe in 1884, to America in the 1890s.

There was a legend that Thai bobtails accompanied their noble owners even in baths – princesses left rings and bracelets on the twisted tails of cats during bath procedures. According to other legends, these pets in the temples were ordered to guard sacred vases. With the effort, the bobtail’s tails swirled, and the eyes became slightly slanted.

For a long time, the breed remained unnoticed, being considered a species of the Siamese cat. For this reason, for a long time, reproduction was carried out along the path of culling individuals with shortly curled tails. This feature is not lost only thanks to individual lovers of Thai bobtail. Later, professional felinologists noted a significant difference in the physique, the location of the ears, not to mention the naturally short tails.

The systematic selection of breeders began only in the twentieth century. Russian breeders made a special contribution to the development of the breed. The first standard at the WCF meeting in 1994 in St. Petersburg was proposed by Olga Sergeevna Mironova. In 1998, the requirements were adjusted at the ICEV meeting. In Russia, the final recognition of the breed took place in 2003 with the participation of the WCF commission. In 2004, the name was internationally approved and the Mekong Bobtail was indexed by the MBT. Crossbreeding with other breeds is considered unacceptable, therefore, individuals exported from Asia are actively used for breeding.

Mekong Bobtails are medium-sized, short-haired animals with color points. Males are much larger than females, their weight is 3.5-4 kg and 2.5-3 kg, respectively. A distinctive feature of the bobtail is a short tail in the form of a tassel or pompom. Sexual maturity occurs by 5-6 months. 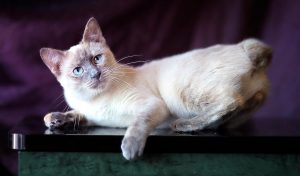 Mekong Bobtail cats are very curious, so get ready for the fact that the pet will follow you everywhere, accompany you in all household chores, and sleep in the bed. Sociable animals make many amazing purring and cooing sounds, commenting on their own actions and responding to the owner’s cues. At the same time, they are quite restrained, do not allow themselves a violent manifestation of feelings. Representatives of this breed love when they communicate with him, often pronouncing his name.

They have “doggy” habits: they like to wear things in their teeth, they are happy to carry out the command “Aport!” In the case of forced self-defense, they bite more often than use their claws. But due to its peaceful nature, it is not so easy to force a pet to defend itself. The Mekong Bobtail is patient with small children. They are loyal beings who become attached to all family members and feel well the mood of the owner.

The breed gets along easily with other pets if they are also friendly. But before starting fish, birds, or rodents at the same time, you should think carefully, because cats have an incredibly strong hunting instinct. Mekong bobtails tolerate travel in cars well, but each animal can have its own “speed limit” if exceeded, the cat begins to meow loudly, informing the driver about the discomfort. If you often travel in a car, it is worth teaching your pet about this method of transportation as early as possible.

If you buy two opposite-sex animals, the cat will take over the pair. She will closely monitor that the cat fulfills parental duties: she accustomed the offspring to complementary foods, a scratching post, a tray, and licked them. In such a situation, the owner practically does not have to deal with these issues.

Do not lock your pet in a separate room. The Mekong Bobtail is perfect for keeping in any family, it can be safely called a fluffy companion. The pet does not tolerate long-term loneliness, which must be taken into account when deciding to have a cat.