African Lake Malawi is famous for its huge variety of fish from the Tsikhlov family. Many species have become permanent inhabitants of home aquariums. And this is not surprising, because life in the rather harsh conditions of the tectonic lake “hardened” these fish, making them hardy. Add to that the stunning bright colors of the cichlids, interesting territorial behavior, and ease of breeding, and you can see why the interest in keeping these fish is only growing. In our article, we will talk about the popular Malawian cichlids – nimble and aggressive melanochromis.

Melanochromis (Melanochromis sp.) Is a genus of freshwater ray-finned fish from the Tsikhlov family. They are endemic to the southern part of Lake Malawi, Africa.

Melanochromises belong to the Mbuna group. Translated from the Aboriginal language, this means “fish living in stones.” The name of the group reflects the ecological characteristics of these cichlids: the fish prefer to live along the rocky shores, from which they scrape off algae – the main component of the diet. The oral apparatus of fish with special pharyngeal teeth is also adapted to this method of feeding.

Among the general features of melanochromises, their territoriality should be distinguished. Having occupied their territory, the males will ruthlessly attack anyone who approaches the border of this area.

An interesting feature of melanochromis is their pronounced sexual dimorphism: adult females and males can be completely different colors (for example, yellow and blue). Surprisingly, subdominant males also often take on the color characteristic of females, but as soon as they stand at the top of the hierarchical ladder, the bright color returns.

Melanochromis have a body shape typical of most Mbuna. It is elongated and slightly compressed from the sides. The head is large, with slight rounding on the muzzle and thick lips.

The dorsal fin is long, stretches across the entire back, and ends with a thickening near the caudal peduncle. The caudal fin is single-lobed. The size of adult males does not exceed 11 cm, females are a couple of centimeters smaller. 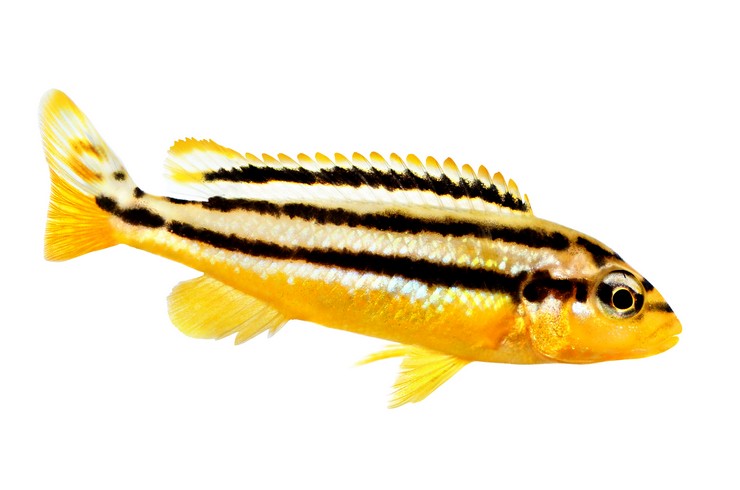 Melanochromises are endemic to Lake Malawi (Africa). At its core, the lake is a body of water, formed as a result of the divergence of tectonic plates, filled with water. Its rocky shores are not distinguished by a serious variety of food, so melanochromis have adapted to scrape off algae. The bottom is sandy.

In nature, the fish live in small harems of a male and several females and zealously guard their territory. Males who do not have their own “living space” usually huddle in flocks of 8-10 individuals.

A properly selected volume of the aquarium plays a huge role in the comfortable existence of melanochromis. It should be at least 200 liters of water. Do not forget about the tight lid, because at one moment the fish can jump out of the aquarium. Melanochromis males are extremely intolerant of each other, therefore, it is better to keep cichlids with a harem: one male and several females.

The fish look most colorful in natural aquariums designed in the style of “Lake Malawi”, that is, when they use quartz sand as a substrate, and stones that form a large number of shelters serve as decorations. Melanochromis easily dig up plants, so it is not always advisable to plant them in an aquarium. But if you want to dilute the design with greens, then it is better to stop the choice of hard-leaved species, such as anubias or cryptocorynes. It is better to plant them in pots. 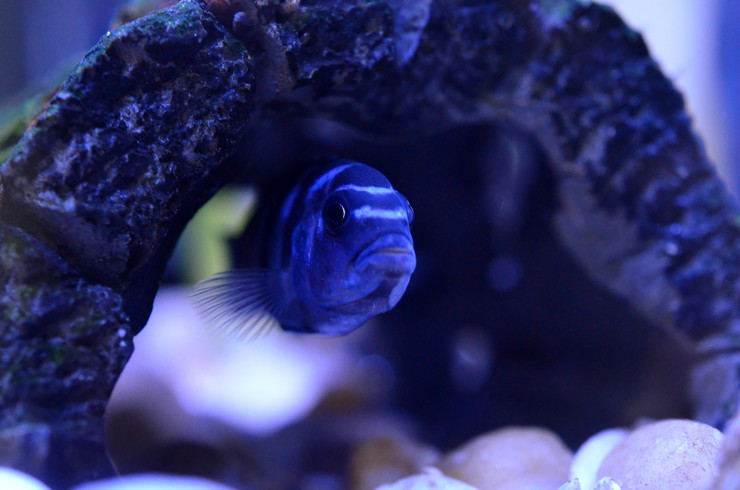 When keeping melanochromises, it is important to maintain high water quality. A suitable external filter and compressor will help with this. Do not forget to make changes of up to 20% of the volume of the aquarium once a week with a high-quality soil siphon. Melanochromis are heat-loving cichlids, be sure to control the temperature in the aquarium and, if necessary, use a thermostat to raise it.

The water of Lake Malawi contains a large number of minerals and is therefore quite hard. This must be taken into account when keeping fish and selecting neighbors.

Melanochromis are territorial fish, this feature must be taken into account when choosing neighbors. It is best to stop at a species aquarium, in which one male and 2-4 females will live. Attempts to add another male usually end in failure: the stronger cichlid either clogs the weaker one or keeps it in a state of constant stress with its attacks, which negatively affects health. 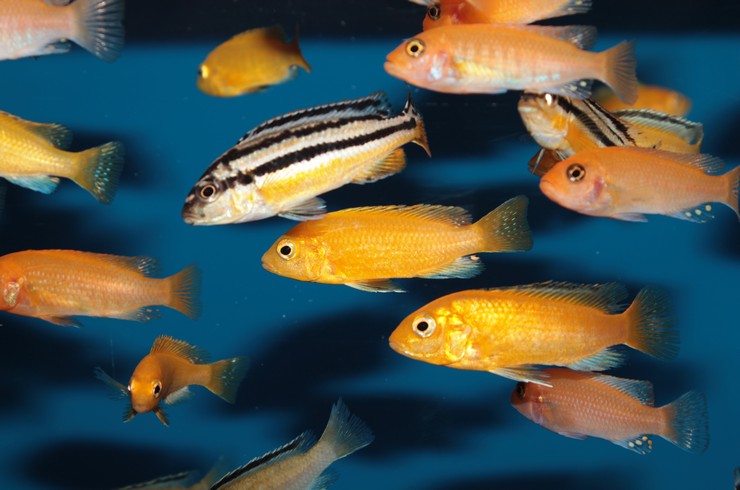 If melanochromis live in a common aquarium, then they need to pick up large, mobile fish as neighbors. Other cichlids of the Mbuna group will work well, but it is important that they differ from melanochromis in body shape and color, because aggressive males will try to attack any fish that reminds them of a competitor. Species of this group can be kept together with blue dolphins, labeotrophies, hummingbird cichlids, etc.

Melanochromises are well combined with Sumatran and shark barbs, as well as with irises.

An improperly formulated diet is perhaps the most common mistake aquarists make when feeding melanochromis. In nature, algal fouling forms the basis of nutrition for these cichlids. They also do not disdain protein food, but it should not prevail. For example, constant feeding with high-protein live or frozen food (bloodworms, tubules, etc.) can lead to problems with the gastrointestinal tract and even the death of fish. In addition, such food can become a source of infection.

Therefore, the best choice for feeding melanochromis will be high-quality dry food with a high content of vegetation:

Melanochromis are prone to overeating, so they should be fed less, but more often (3-4 times a day).

Breeding melanochromis is not at all difficult under suitable conditions. They breed easily both in common aquariums and in spawning ones. The stimulus is usually a rise in temperature. 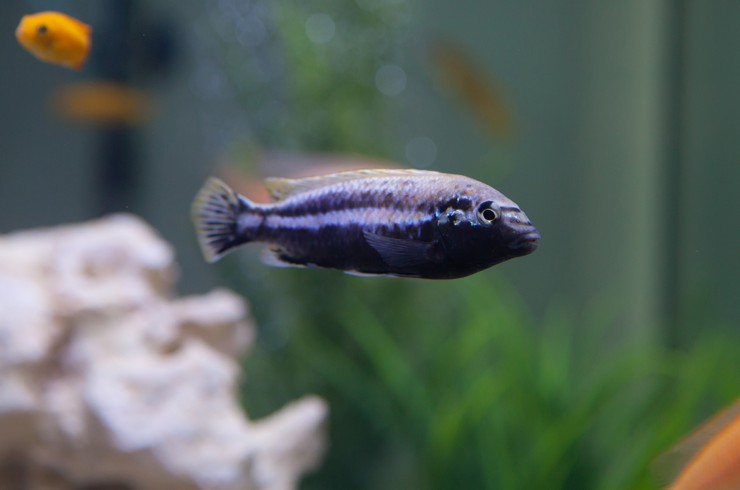 The female, ready for spawning, swims into the male’s territory, where she lays several dozen eggs, which the male fertilizes. After that, the eggs are collected in the mouth, where further incubation takes place. Even after hatching, young fish remain near their mother for another 2-3 months, receiving the necessary protection. Such adaptation increases the chance of survival of the maximum number of offspring.