Micro-collecting galaxy (Danio margaritatus) is a fish that has recently appeared in amateur aquariums. The first copies came to Europe only in 2006 and were assigned to the new genus Celestichthys. However, a year later, a complete scientific description of the species was created, and the fish took its place of honor in the genus Danio (although the first name stuck and is used everywhere).

The specific epithet margaritatus can be translated as “decorated with pearls”, which hints at the characteristic bright spots on the body of the fish. It is worth noting that many experts when they first saw the photo of the galaxy micro-assemblies, took them for a fake, made using “Photoshop”.

A micro-collection galaxy is a miniature fish, the length in an aquarium rarely reaches 3 cm. In females, the main body tone is gray-black, yellowish on the abdomen, in males, a gray-blue body with a bright red belly. White spots resembling pearls are scattered throughout the body. The fins of fish have red and black stripes, while they are transparent along the edges. Females are usually larger than males and have a more rounded body shape. During the spawning season, the colors become even more intense. 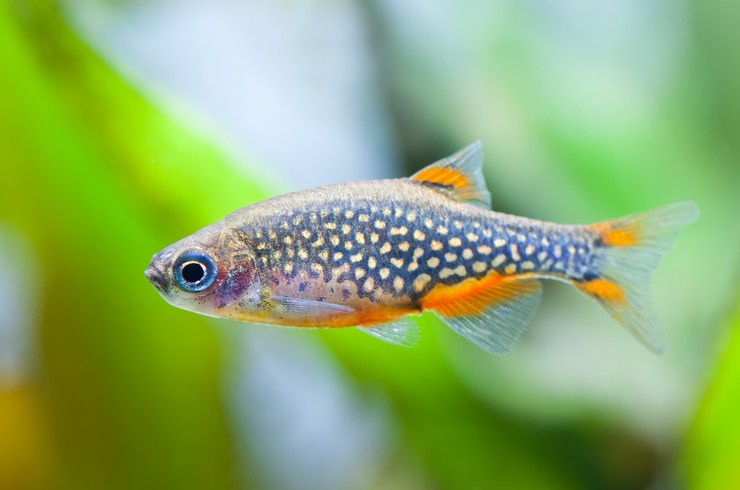 The homeland of the micro-collecting galaxy is the high-altitude (about 1000 meters above sea level) water bodies of Myanmar (Burma). They prefer to live in shallow, up to 30-40 cm, densely overgrown lakes with clear water, which are fed by spring floods. The lakes are located between two tributaries of the Salween River – Nam Lang and Nam Paun.

Before the discovery by the Europeans, this fish was not at all interested in local residents, since it had no commercial value. Sometimes the aborigines caught it, left it to dry in the sun, and then used it as “seeds”.

But after the zebrafish galaxy made a splash in the aquarium market, an active catch of these babies began from their natural habitats. Trapping was carried out by both visiting amateurs and local residents, who sold them to Europeans for a ridiculous price. Unfortunately, this soon put the existence of the species under threat, so the country’s leadership took measures to protect the fish from uncontrolled fishing.

At present, the reproduction of micro-assemblies of the galaxy no longer causes difficulties, and fish in natural biotopes do not experience such serious pressure.

The zebrafish galaxy, due to its tiny size, makes an excellent choice for nano aquariums and shrimp. The minimum volume for keeping is 30 liters. You should not start fish in very large aquariums, in a large volume of micro-assemblies, the galaxy will simply get lost.

It is best to keep fish in flocks of 10-20 pieces, which will allow you to observe interesting social behavior in the flock. In the aquarium, shelters must be present so that non-dominant male can hide at any time. Usually, micro-assemblies galaxies prefer to be in the middle and bottom of the aquarium.

In their natural habitat, micro-collectors of the galaxy prefer clean and transparent water, so effective aeration and filtration system must be set up in the aquarium. But it is worth remembering that the pressure from the filter should not be very powerful, it is difficult for fish of this size to resist a strong current.

Considering that natural biotopes are characterized by dense vegetation, the light for micro-collection of the galaxy should be scattered, although they can easily tolerate bright lighting. In aquariums without plants, the fish become very shy and turn pale. 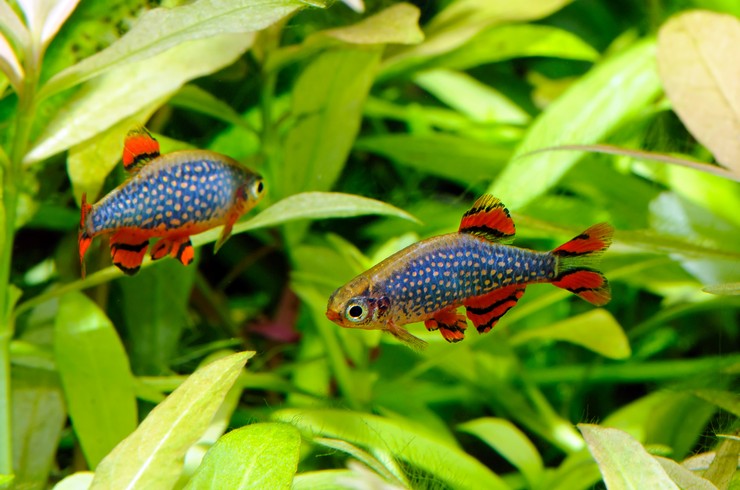 In their natural habitat, the temperature regime is atypical for the tropics. It varies greatly throughout the year, depending on the season. In summer the weather is mild and comfortable, while in the rainy season it is wet and cold. Therefore, fish do well in a wide temperature range. But the most optimal is 22-24 ° C. The water should be soft or medium hard (GH = 5-15), almost neutral (pH = 6.5-7.5). In general, the fish will adapt very well to the various conditions in the aquarium. Zebrafish galaxies are very sensitive to nitrogenous compounds in the water, so water changes should be made regularly in the aquarium.

A Micro-collection galaxy is a fish that seems to be specially created for nano-aquariums, in which it will be problematic for other fish to find a place. But this does not mean at all that the species aquarium is the only way to keep micro-samples.

In an aquarium of a suitable size, a zebrafish galaxy gets along well with peaceful small fish: zebrafish rerio, cuneiform, Endler’s guppy, cherry barbs, blue neons, and others.

It is important to say a few words about the content of micro-assembling the galaxy with each other. Despite the fact that the fish swim in groups, they are by no means schooling. Males spend most of their time grooming females and engaging in skirmishes with their rivals. Such fights usually do not lead to serious injuries and more resemble ritual dances, while the fish move in a circle. However, dominant males can be very aggressive, and if the enemy has nowhere to hide, then the small teeth of galaxies can do him significant harm. It is not uncommon for a dominant male to kill all rivals in very small aquariums until he was alone. The strongest male is usually very easy to identify by the integrity of the fins: they are cut off in all but one single individual.

If further breeding of the galaxy micro-assemblies is planned, then it is not recommended to plant any neighbors (fish, shrimps, snails) with it. This will allow you to organize spawning without settling, right in the aquarium.

The zebrafish galaxy, like other species of zebrafish itself, is omnivorous fish. The natural diet includes small insects, algae, and zooplankton. When kept in an aquarium, fish perfectly eat any type of food, but high-quality dry food is the most suitable. It is important to consider that fish have a miniature mouth and therefore the size of the food should be appropriate.

Especially for lovers of nano-fish, Tetra has launched the Tetra Micro Food line of food for very small ornamental fish. Each food is made from high-quality raw materials and fully meets the needs of micro-fish for nutrients and vitamins. Red particles contain carotenoids for intense coloring, green particles contain plant-based ingredients for health and vitality. Micro Food is easy to eat and absorb, which reduces water pollution. The food is available in four forms: chips, sticks (sticks), pellets, and granules. 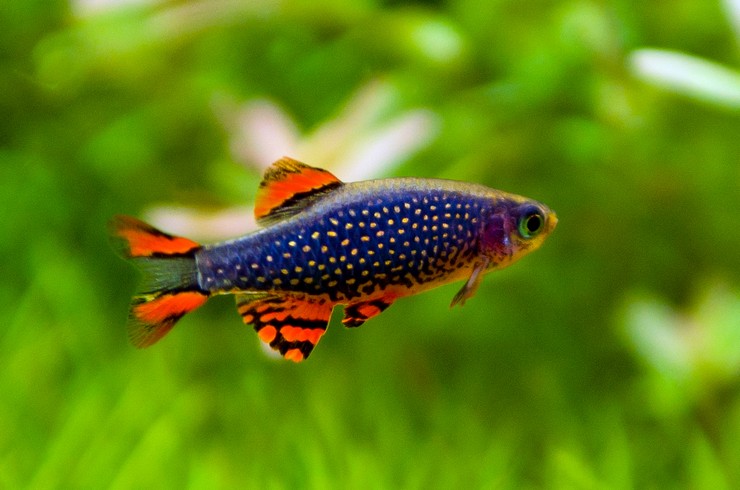 It is usually not difficult to get offspring from micro-assemblies of the galaxy. Often, under suitable conditions, spawning occurs spontaneously, without additional stimulation. But if you want to get the maximum number of fry, you should take care of a separate spawning aquarium in advance.

Distinguishing between male and female micro-assemblies of the galaxy is quite simple. The body color of males is more saturated, bluish, fins are bright. The spots on the body are cream or pearl white. Females are greenish-blue in color, spots on fins are pale, orange. Females are larger than males and have a more rounded abdomen.

The volume of the spawning aquarium should be 10-15 liters. Water must be taken from the general aquarium. The fish do not surround their offspring with parental care at all. Therefore, in order to preserve the eggs, it is necessary to put a protective net on the bottom or place small-leaved plants, for example, Javanese moss. Neither lighting nor filtration is necessary, only weak aeration is needed.

For breeding, it is best to take a pair of fish or a male with several females. Spawning itself usually goes without problems. The female lays sticky eggs (about 10-30), which sink to the bottom. The diameter of the eggs is 0.7-0.9 mm. Micro races are not inherent in caring for the offspring, therefore, immediately after spawning, the parents must be planted in order to protect the eggs from being eaten. Plus, females need periodic rest. Reproduction can take place throughout the year.

The development of eggs depends on the temperature of the water. If it is 20 ° C, then the process will drag on for five days, if it is 25 ° C, then it will take only three days. The hatched larva is dark-colored and leads a sedentary lifestyle for 2-7 days: during the day it prefers to be near the surface of the water, and at night it is attached to the leaves of plants or the walls of the aquarium, where it practically does not move. Inexperienced breeders may even mistake such fry for dead. During this period, they must be fed with small feed. Soon the fry begins to swim, loses its dark color, and becomes silvery. A month and a half after the spawning of micro-gathering, the galaxy reaches a size of 1-1.5 cm. The fry begins to acquire color in 2-2.5 months. Sexual maturity occurs around the age of one year.