Over the centuries of the breed’s existence, Miniature Pinschers have managed to prove themselves in almost all areas of activity. They were used as guard dogs on the farm, where they were appreciated not only for their loud barking but also for their ability to catch rats properly. Often they accompanied carriages and stagecoaches, both ordinary people and noble persons. 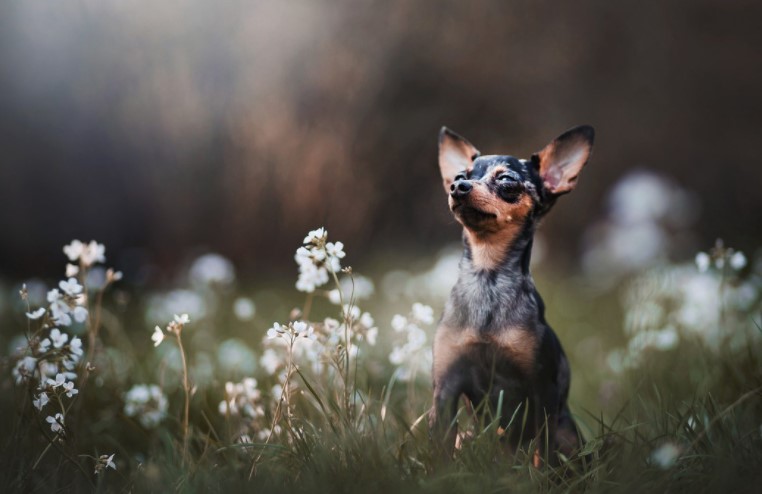 Contrary to popular belief, the Miniature Pinscher dog breed is not a relative of the Doberman and has nothing in common except color, homeland, and guardian instinct with them. The country of origin of the breed is considered to be Germany, but it is very difficult to say for sure where, when, and how they began to be bred. The history of the origin of the Miniature Pinscher begins with the first mention of similar dogs that are found in writing and artworks of the 15th century while breeding work on the Doberman breed, then he was still a Thuringian Pinscher, began only in the 19th century. But back to the Miniature Pinschers.

There is an opinion that the Pinschers came to Germany from Scandinavia, and they are very fond of practical Germans for quite understandable reasons: they eat little, work a lot, and take up almost no space. Back in the Middle Ages, these amazing miniature dogs were recognized as the best coachman’s assistant. They lived in a stable, where they carried out their security service. But besides that, they caught rats and did many other small errands, which they did well.

In 1836, the breed was first mentioned as the Miniature Pinscher. Its large-scale selection began in the second half of the 19th century, and after a few years it was first exhibited and the first standard was developed. The Pinschers would have continued to do well, but people invented the car, which means that the dog, the coachman’s assistant, became unnecessary in times of technological progress. This wonderful breed would have disappeared if not for the work of enthusiasts who tried and were able to make an excellent companion out of the Pinscher with protective instincts, incredible activity, and imperial manners to the territory. Later they were even taken to hunt. And the fact that these dogs are excellent companions is beyond doubt. If we talk about the purpose, it is impossible to single out one main quality, these are undoubtedly universal animals that, despite their miniature size, will fulfill any task assigned to them. 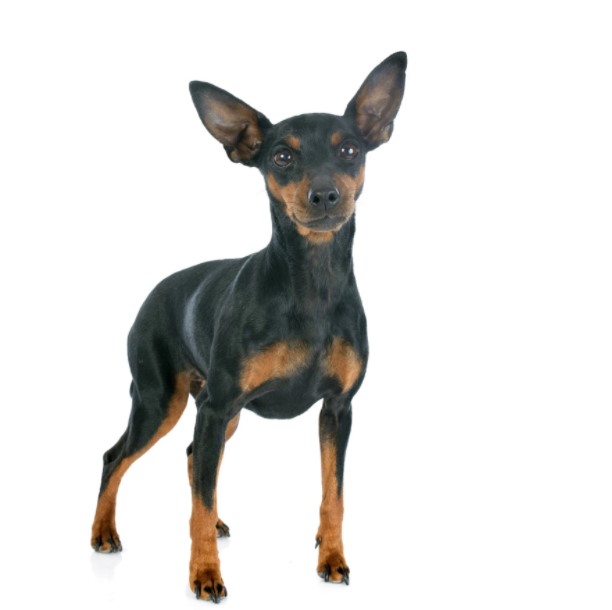 Undoubtedly, the appearance of the Miniature Pinscher is remarkable. They are energetic, slender, and fragile-looking dogs. It is also impossible not to note their unusual dancing gait. A Miniature Pinscher puppy is very different from an adult dog in softer outlines.

The head is small, the forehead is parallel to the bridge of the nose. The nose is always black. Scissor bite. The eyes are oval, dark. The ears are set high, drooping or erect, triangular in shape. The neck is slightly arched and dry. The back slopes slightly from the withers to the tail. The croup is rounded. The chest is moderately broad. The belly is tucked up. Forelegs and hindquarters straight, set parallel. The movements are harmonious, strong, while the back remains stable. The skin fits snugly all over the body. The coat is thick, short, shiny. The color can be black and tan or solid deer. The Miniature Pinscher is very miniature, the size of an adult dog: height at the withers – up to 30 cm, weight – up to 6 kg. 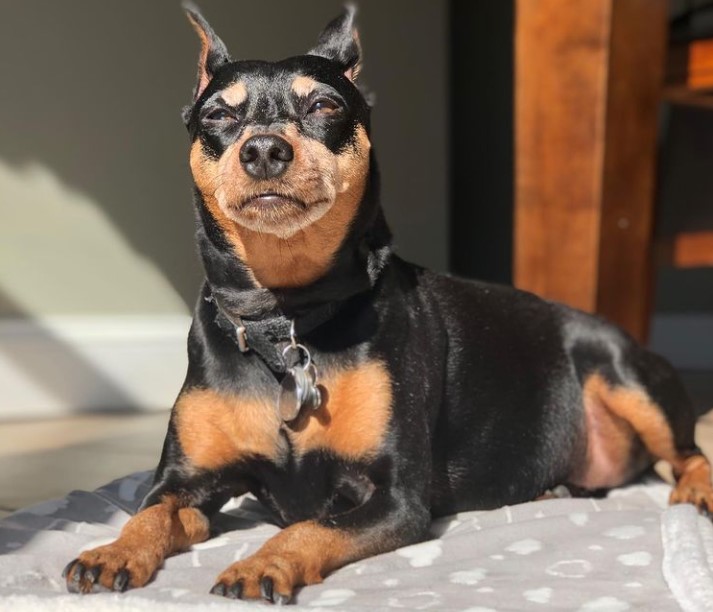 These dogs have an active and inquisitive disposition. They should always be in the spotlight, be aware of everything and participate in everything. The character of the Miniature Pinscher is strong and independent, but at the same time, they are very attached to the owner.

If you do not give your pet enough time, he will definitely find something to do, but before that he will be upset and draw conclusions. These dogs have an energetic, lively, balanced, and slightly self-confident temperament. In general terms, the psychological portrait of the Miniature Pinscher can be described as choleric. Pinschers are easily aroused and also calm down quickly. They are strong and independent. They are also somewhat suspicious and prone to excessive barking. Only the right upbringing can teach them hospitality. They will not be sad or bored for a long time and will quickly find themselves a fun activity. 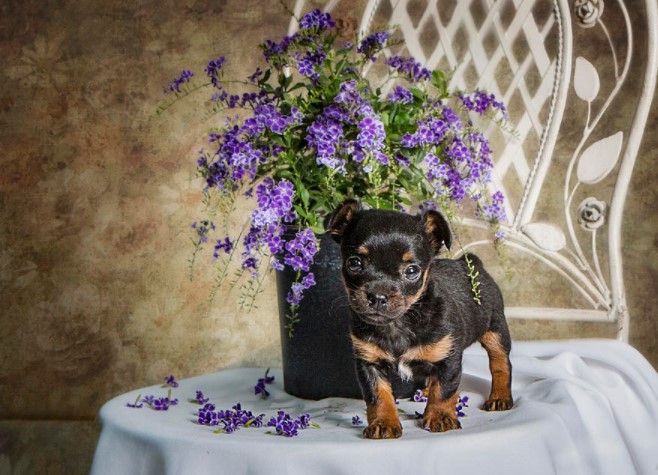 A Miniature Pinscher is perfect for maintaining an apartment, it is great if he lives in a house where he will have his own yard. It is very important to provide the Pinscher with his own place to rest and sleep, which must be hidden from prying eyes.

Caring for a Miniature Pinscher is simple. Brush the dog with a special thick brush for short-haired dogs a couple of times a week. After combing, you can remove any remaining dead hairs with a damp cloth. They are rarely bathed, and after water procedures, it is important that the animals dry well indoors without drafts. From time to time it is necessary to trim the claws, due to the small weight of the dog, they do not always grind off on their own. If you regularly devote a little time to the appearance of the Miniature Pinscher, it will always look like in the photo from the dog show. 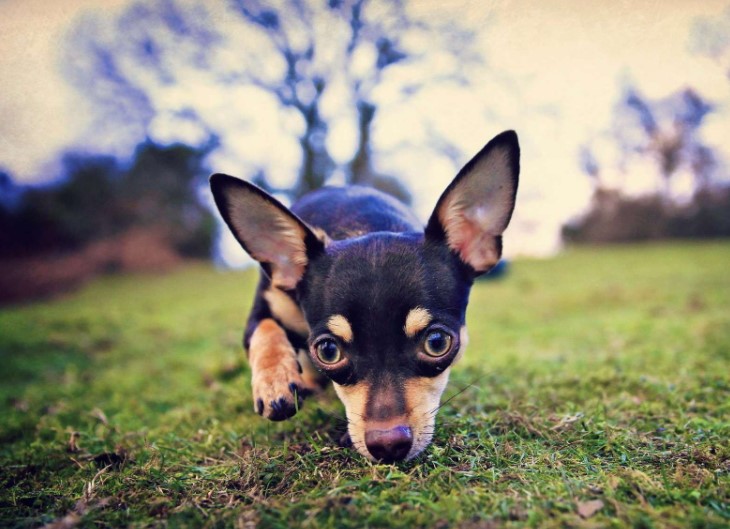 Miniature Pinschers are considered healthy dog ​​breeds. The health of the Pinschers is generally good, but a number of diseases that are most common can be distinguished: eye disease (cataract, glaucoma), diabetes, urolithiasis, dislocation of the shoulder joint. Often, representatives of the breed suffer from allergies. If there are more than two puppies in a litter, the mother may need help feeding. Life expectancy is 13-15 years.