Chillingham Park, located in Northumberland on the border between England and Scotland, is home to a small herd of white cows and bulls. Every year, visitors from all over the world come here to see them. Why? Because these animals are unusual. It is believed that wild white cows have been in Chillingham since at least the 13th century. Actually, then, around the territory of 600 hectares, a park wall was erected to keep herds of wild animals there, which were then killed for meat, and now the park’s territory is only 140 hectares. 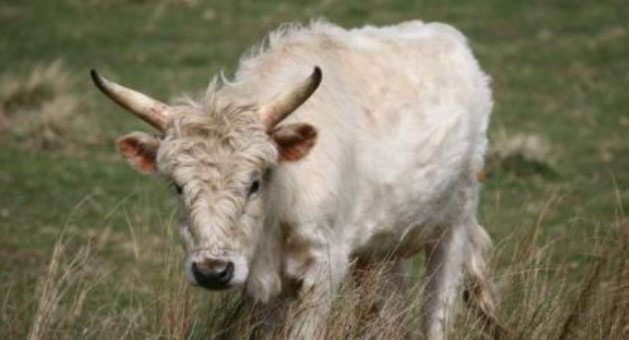 These unusual white cows and bulls have red ears, black legs, and spotted muzzles. The spots appear at the age of two and later spread to the neck, shoulders, and chest. No one remembers that even a partially colored calf was born in a herd. There is an opinion that these animals were not crossed with any breed of domestic cows. Other breeds of Chillingham cows – there are about a thousand of them here – can now be seen in many parts of the UK and North America. But these white cows are not. Tests have shown that they have a unique blood group among all their relatives in Western Europe.

In bulls, the horns grow forward and to the sides, while in cows they are bent backward. The shape of the skull and the way the horns grow is similar to that of the tur, an extinct wild bull, whose image can be seen in Europe among cave paintings. Some believe that the members of Chillingham’s unique herd are the direct descendants of the cows and bulls that once roamed the British Isles. Although where they came from is still unknown.

During the day, the herd prefers to spend time hiding from the sun in the shade of trees. The animals look at the tourists watching them with their inherent curiosity. Some may even walk up to cars and rub their big horns against them.

The leader of the herd, or, as he is also called, the king of the herd, rules. This is the largest and strongest bull. During his “reign”, which lasts about three years, cows give birth to calves only from him. Thanks to this, only the best blood is passed from generation to generation. Later, this bull is not allowed to mate with its offspring, and no son can become a sire after the father.

Once the main enemies of these animals werewolves, which mainly hunted weak members of the herd. And although wolves in Great Britain disappeared back in the 16th century, if the herd is scared, animals shrouded in fear sometimes begin to flee. And when the herd finally stops, the bulls instinctively become a ring around the cows and calves, trying to protect them from a possible predator.

These animals are really wild, so modern agricultural methods do not help at all in caring for them. Even in winter, when there is very little grass, they eat only hay and straw, refusing grain and other feed for livestock. Calves are born with very low birth weight, so there are rarely problems during childbirth. But if they do, the veterinarian still cannot help the cow. They say that when a person touches an animal, other members of the herd can stab their relative to death.

The cow gives birth to a calf away from the herd and hides it from her relatives for about a week. Then the mother with the child approaches the herd, the bull-leader comes out to meet them and leads them into the herd. Then other cows, before accepting the calf, examine and sniff it. When a newcomer is recognized as one of their own, no one pays special attention to him.

In 1967, 4 kilometers from Chillingham Park, there was a major outbreak of foot and mouth disease. The park was immediately closed, and thanks to this, an unusual herd was saved. After that, they decided to breed a small herd of these unique animals in Scotland to prevent their extinction.