More than a century ago, a nationwide story was often told in America. The hero of the story was an American priest who taught a rattlesnake, before the prayer began, to rattle its tail, thus giving a signal. Also, another legend about the gold miner Olin Yang was not a little known, who, having caught a rattlesnake, took it to himself as a watchman, while carefully training it. It was rumored that when someone approached the house, the snake began to rattle its tails, making unpleasant sounds, thereby, frightening off the stranger. When the owner of the house returned, the snake was silent. 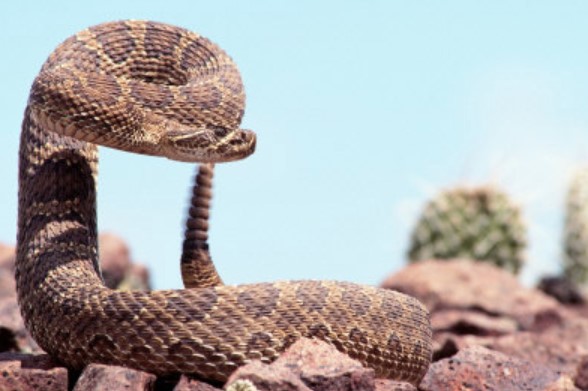 Science has proven that snakes are quite smart and have a meek character. They never attack unless touched. Just like wasps, bees, and other animals. But, to be more precise, rattlesnakes never bite at all. When the snake attacks, it does not bite the victim, but for a split second plunges two razor-sharp teeth into the victim’s body, leaving two bright dots on the surface of the skin. If this animal leads an underground lifestyle, then the snake will pierce the soil until it reaches its victim dead.

As eyewitnesses who encountered the snake said: “The rattlesnake is a rather lazy animal.” Yes, this is true. As already mentioned, if you do not touch the snake, then it will not touch either. Moreover, if the snake is nearby, then it can be easily recognized by the sound of its “tail rattle”. But, if someone does not recognize the snake in time or in some way makes it angry, then it will be very bad. Snake bites are extremely dangerous. Her teeth pierce through and through a thick stick, not to mention the skin of an animal or human. Then, with the speed of lightning, a potent poison is injected, which kills in a matter of minutes. “But there are animals that are not at all afraid of these snakes. For example, pigs, – wrote Alfred Brehm.

The main feature of the rattlesnake is the “rattle” at the end of its tail, which begins to rattle desperately as soon as the snake senses danger. By the way, the snake received such an adaptation from nature, not by accident. The first rattlesnakes appeared in nature during the Tertiary era. At the end of the era, there was a mass extinction of these animals, and those with the most dangerous poison and a loud-sounding rattle survived.

When a baby rattlesnake is born, a rattle embryo forms at the end of its future tail. When the snake begins to change its skin, the rudiment falls off and the first segment of the “rattle” is formed. The finished rattle consists of several empty cone-shaped capsules tightly adjacent to each other.

As the snake grows, a new segment is added to the tail exactly every four months. In total, in an adult snake, the rattle has up to fifteen full segments.