The Norwegian Forest Cat is the embodiment of power and beauty. Her appearance is something between a lynx and a wild cat. This is a calm, calm and affectionate cat, distinguished by impeccable manners and restraint. She bravely explores new places and surroundings, hunts excellently, is active, but at the same time does not impose her society on anyone. 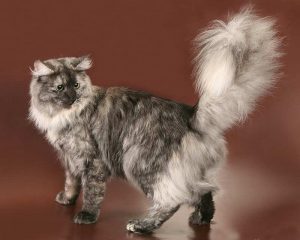 “Norwegians” are strong, large animals with long limbs. They have tenacious powerful claws, and therefore cats easily climb tall trees and boulders. The nose is straight, the ears are tufted, the eyes are almond-shaped, the muzzle is triangular. The main and topcoats are water-repellent, glossy, greasy to the touch. “Frill” in adult cats resembles a thick beard. In summer, the undercoat is much shorter than in winter. In the spring and summer, the molt is a “waterfall”.

The Norwegian forest breed is a strong, beautiful animal with a fairly independent character. At the same time, they are couch potatoes and keepers of the hearth. They love to be in company with people, get along well with children, find a common language with other pets.

Pets of the Norwegian forest breed are beautiful not only physically, but also spiritually. He is an excellent companion who is always there but does not impose his society, although he will be happy to keep you company in doing some household chores or walking in the fresh air, of course, if he lives outside the city and this is his usual habitat, in differences from a city apartment. 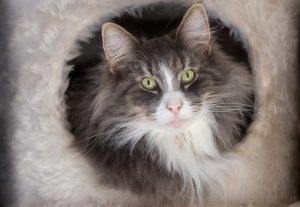 The Norwegian gets along well with other pets and children. If he doesn’t like something, then he would rather leave than achieve his goal, get angry, be petty, and even more so to take revenge. This is beyond his aristocratic dignity.

If you have not yet decided on the choice, but want the cat to be your companion and friend, if you love long-haired cats, but do not want to waste time on grooming, if you want to participate in exhibitions and amaze others with a rare breed – the Norwegian Forest Cat is also created For you.

Norwegian forestry is now recognized by almost all international felinological organizations. The abbreviated name “Wedgie” is adopted by felinologists and cat breeders in the United States as a derivative of the word “Norwegian.” An animal of medium to large size, in appearance it resembles a lynx.

He also looks like a Siberian cat, a Turkish Van, and a Maine Coon.

Norwegian Forest Cats are the only cats that can climb a tree trunk upside down in a spiral path.

The Norwegian cat is an excellent hunter who loves freedom, outdoor life, or free-range. But, despite this, he easily adapts to life in the house. 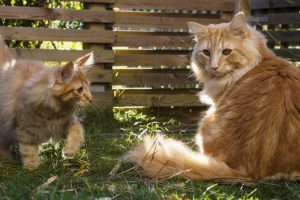 It is believed that the Norwegians are an unpretentious breed. However, it should be remembered that these are semi-long-haired cats and need to be brushed regularly. You also need to purchase a scratching post. This is a healthy breed, but there is a genetically determined predisposition to glycogenosis (a defect in enzymes responsible for the metabolism of glycogen and causing cirrhosis of the liver).

The standard allows any color of animals, except for points. Disadvantages of the breed are considered to be the dry tousled coat, round head, short tail, or too graceful build.

The Norwegian woodland cats reach maturity late – by four to five years, and only from this age is it ready for reproduction.

The Norwegian forest color is striking in its rich variety. Representatives can have color:

It is very important that the color of a monochromatic coat is uniform from the very root to the tip of each hair, and if it is two-colored or spotted, then there should be a clear line between several shades.

According to Norwegian legends, the color of a Norwegian depends on the place where he lived. So, for example, marble or striped is typical for the eastern part of Scandinavia and the central regions. The red or tortoiseshell color of the coat is defined for the southern region of the peninsula. Rocky coastal areas were inhabited by monochromatic (white and black) and two-colored cats.

Their color acted as a kind of disguise in the conditions where they lived.

Cats with Siamese, chocolate, lilac color, as well as cinnamon, and fawn are discarded.

Today, the Norwegian Forest Cat, which can be bought in various nurseries, is a welcome pet for many families.