The Portuguese Water Dog has been an indispensable companion for fishermen for centuries. Today it has established itself well as a companion. Smart, obedient, clean, eager to please, and has a hypoallergenic coat that does not shed, but requires maintenance. 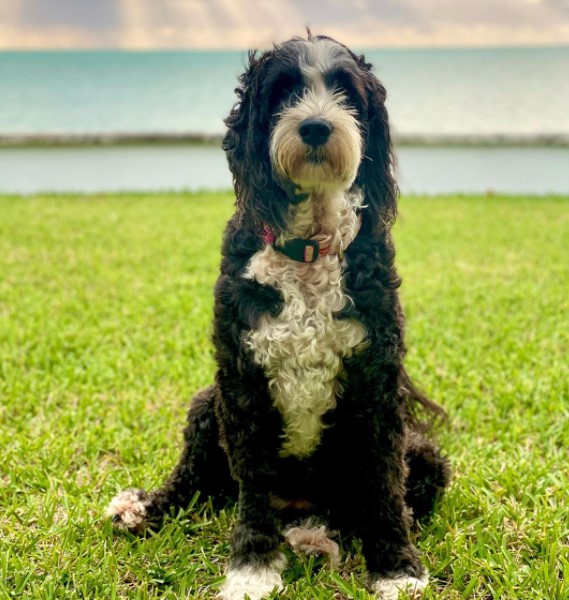 The Portuguese Water Dog is an ancient breed of dog that was on the verge of extinction in the 20th century but has been restored thanks to the work of Portuguese and American breeders. The oldest known mention of the breed dates back to 1828. This is an engraving showing a very similar dog swimming towards the boat. But it is believed that they appeared much earlier, approximately between the 5th and 7th centuries. The historian Manuel Fernandes, in his book Water Dog (1938), says that it was known to the ancient Romans, who called it “lion” because of its characteristic haircut.

Portuguese Water Dogs were the main fishing assistants. They were famous as excellent swimmers and divers, could catch fish that had just got off the hook and get tackle out of the water, passed notes between boats on the sea and helped keep in touch with the shore, were responsible for the safety of the vessel and tackle. Sometimes the owners rented their dogs on long-distance boats to generate additional income.

The Water Dog was an indispensable attribute of fishing boats until the industrial revolution came to Portugal. Over time, the breed, which was widespread throughout the coast, survived only in the Algarve, where the old fishing traditions were honored. In the 1930s, the breed was revived by Bakko Bensaude, owner of the fishing fleet and founder of the National Club of Portuguese Water Dogs. He gathered representatives of the breed from all over the country and developed a breeding program. By the 60s of the 20th century, the number of purebred Portuguese Water Dogs did not exceed 100 individuals. In 1966, the standard was written. In 1981, the Portuguese Water Dog (port. Cão de agua português) was recognized by the American Kennel Club and in the same year, the Guinness Book of Records named it the rarest breed in the world. 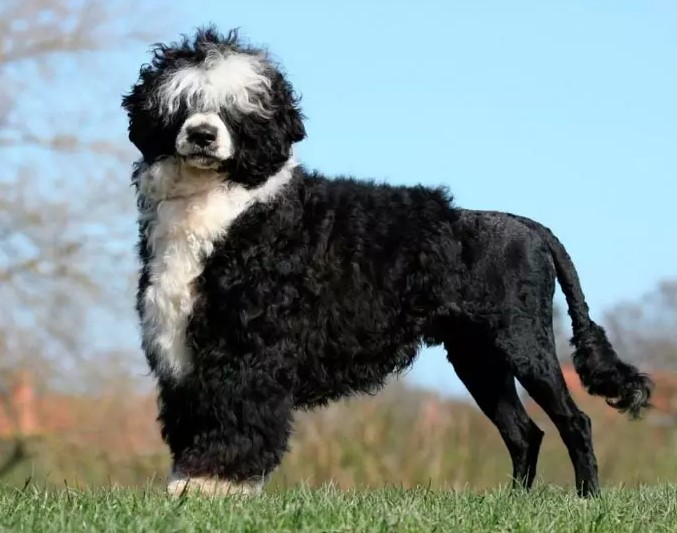 The Portuguese Water Dog must be agile, agile, and resilient. The dog is of medium size, balanced, well proportioned, and well-muscled. Has some external resemblance to Spanish Water Dogs and French Barbets. Height at withers in males – 54 cm, weight – 16-23 kg; females height – 46 cm, weight – 19-27 kg.

The skull is slightly longer than the muzzle, the forehead is broad with a central groove, the occiput is well defined, the stop is clear. The muzzle tapers markedly towards the nose. The nose is wide with well-open nostrils, black or brown depending on the color. The lips are thick, well pigmented, and match the color of the nose. Scissor bite. The eyes are medium in size, set slightly oblique, rounded, dark brown in color. The eyelids are well pigmented. The ears are set above the line of the eyes, thin, shaped like a heart, well pressed to the head, except for a small area at the back at the base.

The membranes between the toes help the Portuguese to swim perfectly, and the ability to hold their breath before diving helps to dive.

The neck is short, high, round, without dewlap. Slightly stretched body. The chest is deep and broad, reaching down to the elbows. The ribs are long, rounded. The belly is well tucked up, the loin is broad and muscular. The croup is short, slightly sloping. The tail is thick at the base, tapering towards the tip, set just below the line of the back, carried slightly curved. Legs are strong, straight with good angles, rather dry. Feet are rounded, rather flat. The nails are slightly raised and can be of any color. The central cushion is very dense, the others are of moderate thickness.

The coat is very thick, evenly covering the whole body, except for the groin area, where it is thinner and less frequent. No undercoat. According to the type of coat in the breed, there are two types:

The color is black, white, and various shades of brown, as well as any combination of black or brown with white. White is not a sign of albinism, provided the nose, eyelids, and lips are black. The skin has a bluish tint. 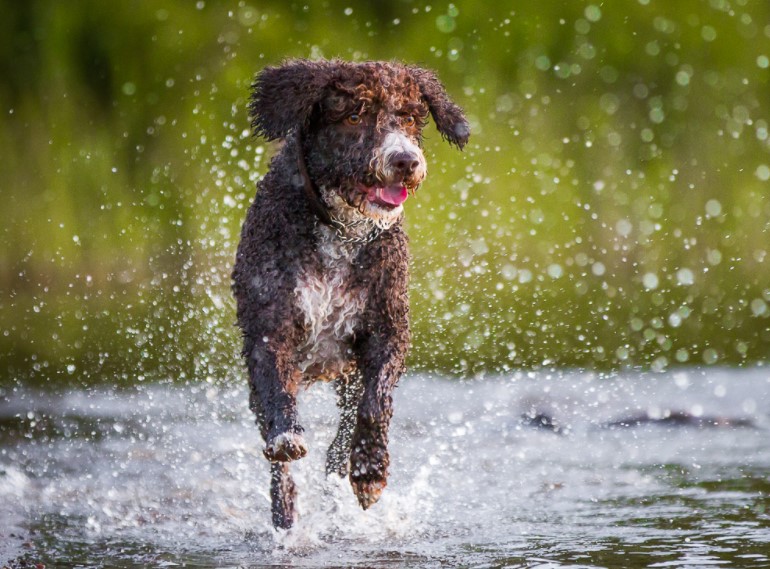 The Portuguese Water Dog is energetic, friendly, curious, and attentive. The dog loves to work and to be in the spotlight, is always happy to swim and is resistant to fatigue, cannot stand loneliness, obedient and responsive. Lack of attention for an extended period of time contributes to the development of destructive behaviors.

The Portuguese Water Dog is very strongly attached to the owner, becoming his unobtrusive shadow. He treats other family members with care and love. Gets along well with children of all ages, but is best for families with older children who can become companions in games. The sociability of the Portuguese Water Dog extends to other animals: dogs, cats, small rodents, and birds, but provided that it was well socialized or raised with them. At a young age, especially with a lack of physical and mental stress, the Portuguese are prone to spoilage of things.

It should be borne in mind that the character of the Portuguese Dog has courage and a strong spirit. In general, she is very sweet and non-conflicting, but she is suspicious of strangers, is a good watchman and, if there is a suspicious noise or approaching the house, she will bark. Guarding abilities are less developed and are not manifested in everyone. 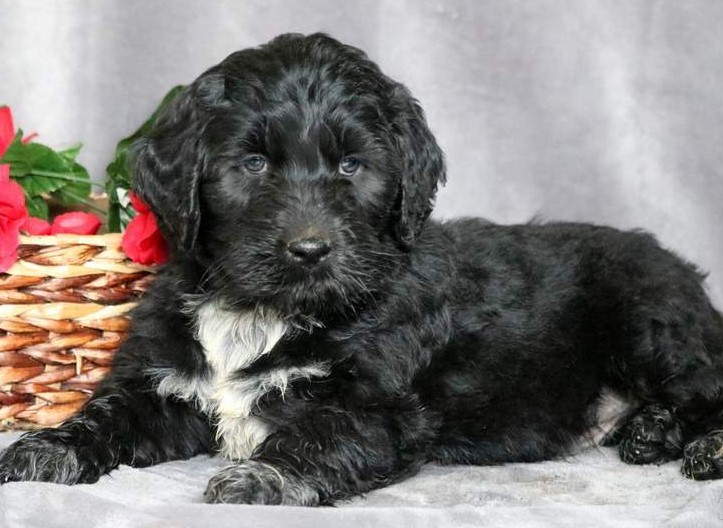 The coat of the Portuguese Water Dog grows slowly and evenly throughout the body, seasonal molting is not pronounced, so it must be regularly brushed with a natural bristle brush, removing overripe hairs from the coat. The ears are cleaned about once a week. The accumulated sulfur is removed from the ear canal and the wool is plucked out. After swimming, it is recommended to dry the ears. Bathing is shown every 7-10 days. When bathing your dog, use shampoos and conditioners that make the coat silky and soft to the touch. Brushing your teeth weekly can help prevent extremely unpleasant dental diseases. Many owners cut their Portuguese Dogs for ease of grooming and just for a change. Haircuts can be any for pets. 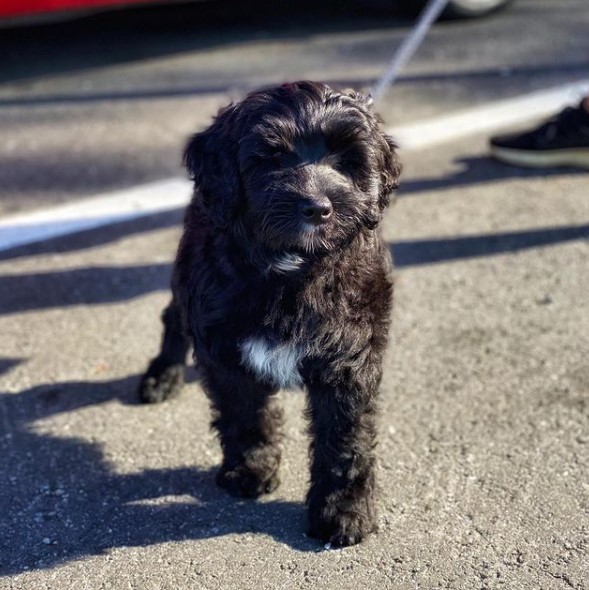 The Portuguese have good health, stamina, and good immunity. They are devoid of a number of hereditary diseases that are common in other breeds, but have a predisposition to ear infections, dental diseases, and gastrointestinal problems, if not properly cared for and maintained. For dogs inbreeding, the breed club recommends taking tests for hereditary ophthalmic diseases and hip dysplasia.

To maintain the health of the Portuguese Dog, it is important to treat it from parasites in a timely manner and get vaccinated against major infectious diseases. Life expectancy is usually 11-13 years.