Not all natural forms of aquarium fish are brightly colored. In the natural environment, this can interfere with the survival of individuals. For example, scalars living in nature are painted nondescript – a grayish body with dark stripes, which allows them to effectively hide in thickets of plants. However, many aquarists want to see bright, attention-grabbing inhabitants in their aquariums, and here breeders come to their aid, who carry out difficult and painstaking work on breeding new breeds. One of the colored variations of the scalar will be discussed in our article.

The koi scalar (Pterophyllum scalare) is a breeding form of the common scalar, a distinctive feature of which is the three-color body-color (white, black, and red-orange). It is one of the most beautiful and sought-after variations.

Among the peculiarities of the breed’s maintenance, it is necessary to highlight the mandatory need to feed fish with feeds with a high content of natural carotenoids in order to maintain the brightness of the red-orange spots, which are especially appreciated. 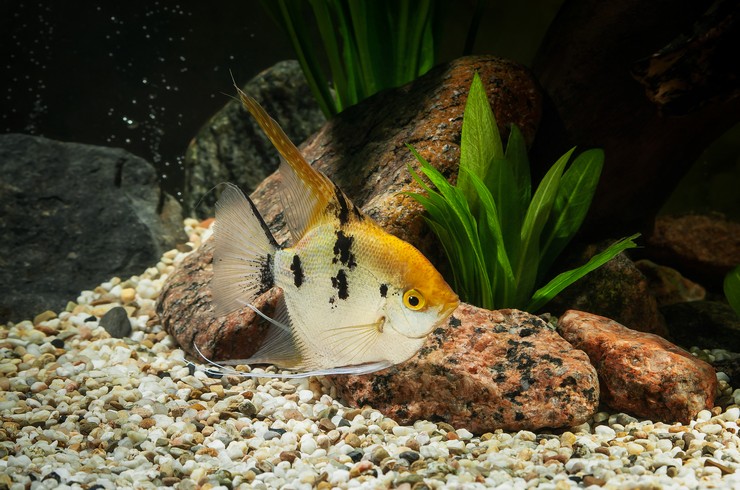 Scalarians have a flattened body with highly elongated fins. In appearance, the fish resemble a crescent or triangle. This body shape allows natural individuals to perfectly camouflage themselves among the thickets of aquatic vegetation. The pelvic fins are filiform. The body of an adult koi scalar can reach 15 cm and with fins up to 20 cm. Sexual dimorphism is not pronounced; in adult males, a more convex forehead can be observed.

The body color is presented in three colors: red-orange, black and white. This is very reminiscent of the popular coloring of Chinese koi carps, for which the breed got its name. 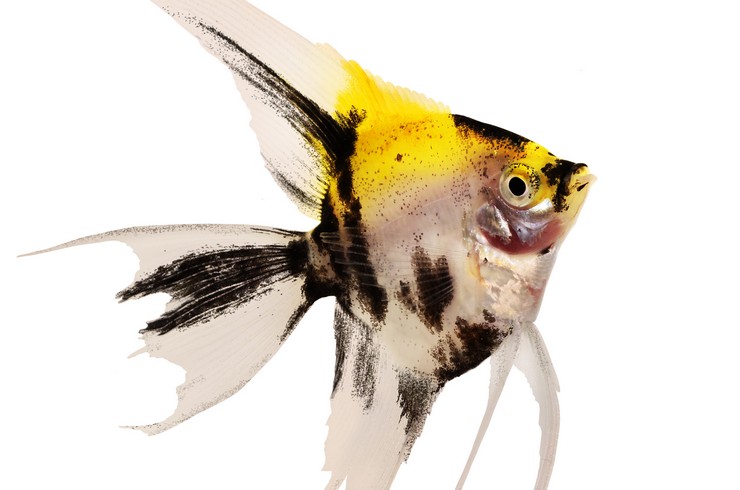 It is worth noting that this breed is highly variable. The spots on the body can cover different areas. It is still unknown which genes are responsible for the predominance of pigments, so it is not yet possible to obtain a persistent orange color. The color of fish is seriously influenced by the conditions of keeping and feeding.

When living in comfortable conditions, the color of the koi scalar becomes even more intense with age.

The koi scalar is a breeding form and is found only in hobbyist aquariums. Natural forms of scalar live in the rivers of South America, in particular, the Amazon and its tributaries. Fish prefer slow-flowing bodies of water. They live in small groups of up to 10 individuals. In their natural environment, scalars prefer warm, soft, and slightly acidic water. It is recommended to create the same conditions when keeping thoroughbred koi scalars. 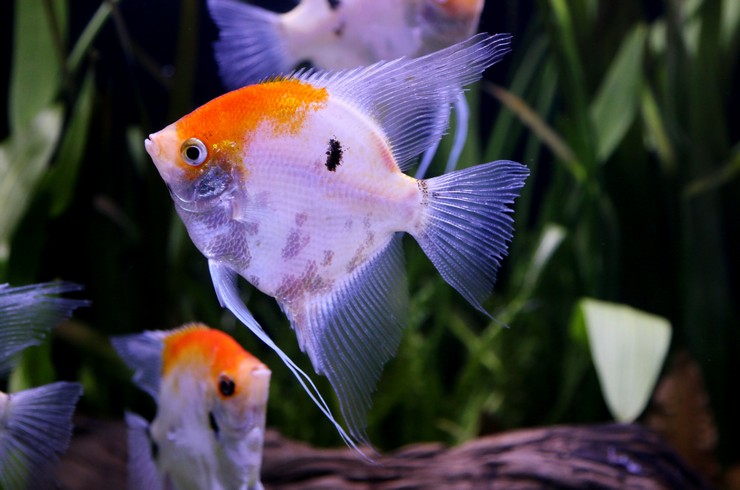 The size of the koi scalars, which can usually be found on sale, does not exceed 5-8 cm. This often misleads some aquarists, and they decide to settle these fish in small aquariums. Adult scalars are rather large fish and the optimal for a pair of fish is considered to be a capacity of 100 liters at least 50 cm high. It is best to keep fish in pairs or in small groups of 6-10 individuals. In a flock of koi scalars, a strict hierarchy is established, one pair is dominant, which periodically shows its superiority over other individuals by arranging skirmishes.

At the bottom of the aquarium, the soil is laid, which is suitable for growing live plants. It can be coarse river sand or small pebbles. In the aquarium, it is necessary to create areas of dense vegetation that will serve as a refuge for the fish and open areas for swimming. Koi scalars look good surrounded by natural stones and snags. The fish do not dig and usually do not nibble on plants, making them ideal for herbal aquariums. 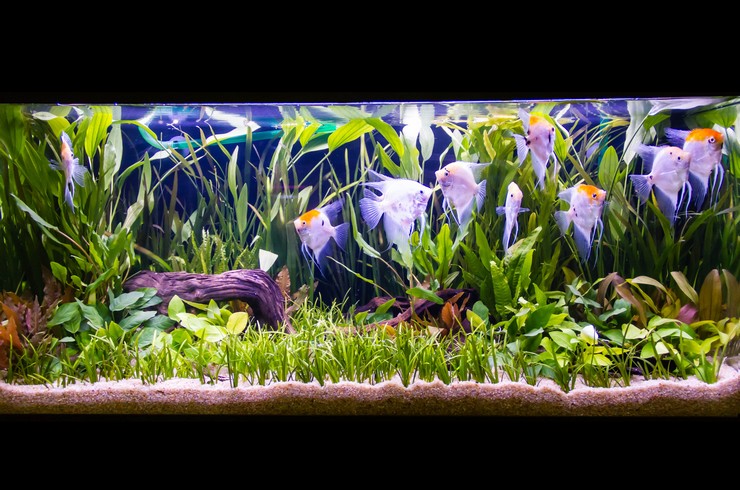 When keeping koi scalars, it is necessary to take care of good filtration and aeration of the aquarium, for which external filters and efficient compressors are used. Fish easily tolerate bright lighting, therefore, when choosing lamps, it is advisable to focus on the needs of the grown plant species. Once a week, you need to change the water – up to 20% of the volume of the aquarium.

Poor conditions of detention, of course, will lead to a loss of color intensity of the koi scalar, the body will become faded, the characteristic shine will disappear.

The scalar koi belongs to the Cichlid fish family, but despite this, it has a completely calm and peaceful character. The “predatory” nature is manifested, perhaps, only during the spawning period, when the fish drive off strangers from their clutch, or when kept in small volumes. The confined conditions increase the aggressiveness of the fish. 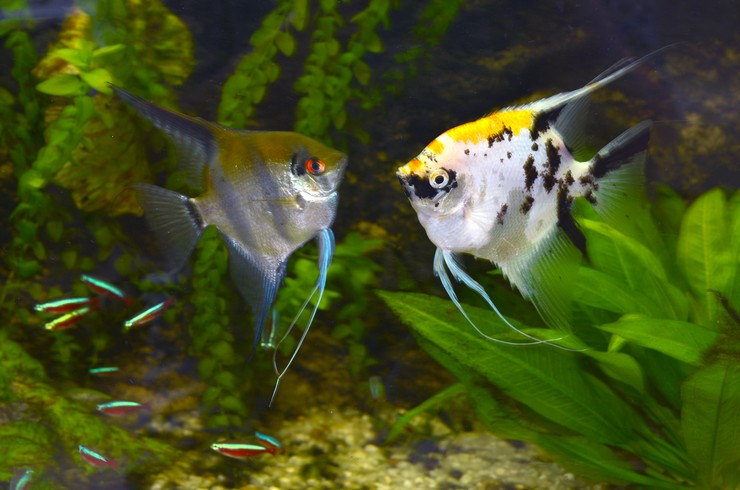 It is not recommended to keep the scalar together with barbs. It is noted that sometimes these active bullies pluck koi fins on scalars. You should not add a scalar to goldfish because of the large differences in conditions of detention.

Feeding koi scalars at home are easy. They perfectly eat quality dry food in flakes, chips, or granules. It is better to refuse live and frozen food because they are unbalanced and pose a threat of contamination of the aquarium.

Koi scalars prefer to feed on the surface of the water, less often in the middle layers of the aquarium. It should be noted that they need food with high carotenoid content. This will maintain the bright reddish-orange spots. 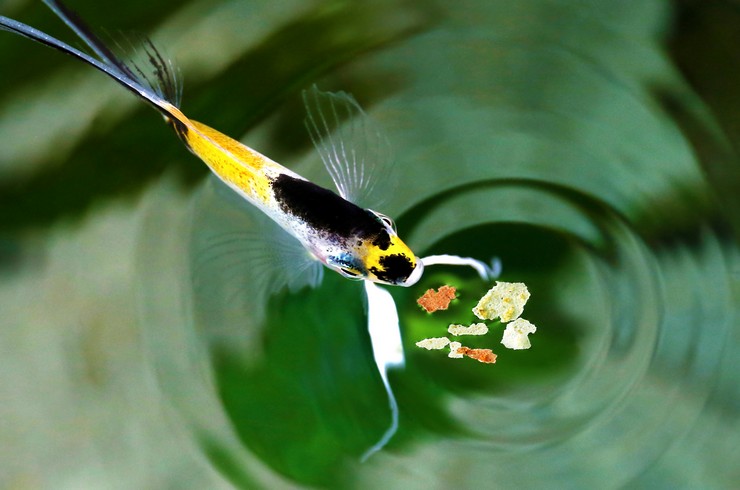 Taking these needs into account, the following dry foods are well suited for feeding scalars:

The scalar must be fed several times a day with such a portion of food that will be eaten by the fish in a few minutes. Tetra FreshDelica natural treats will help you to diversify the diet of your pets – these are traditional food organisms (bloodworms, daphnia, brine shrimp, krill) in nutritious jelly that the scalars will definitely like.

Koi scalars become sexually mature at the age of 8-12 months. Sexual dimorphism in fish is not pronounced, and at an early age, it is almost impossible to distinguish a male from a female. The main feature in adults is the line of the back and abdomen. In females, it is almost straight, but in males, it makes an angle. Also, often in females, a fatty bump on the forehead does not form. During spawning, a wide ovipositor can also be seen in females. Koi scalars are monogamous fish that form pairs independently.

The fecundity of a female can range from 300 to 700 eggs. Koi scalars are distinguished by a well-expressed parental instinct – a caring couple regularly ventilates the clutch with their fins and spoiled eggs are removed.

The eggs are incubated for 2 days, after which the first larvae appear from them. They feed on their yolk sac for about a week and then switch to self-feeding.