Neon Tetra is a popular and recognizable aquarium fish. The special shine of the stripes on the body will not leave anyone indifferent, and a large flock can draw attention to itself for many hours. How to properly care for this wonderful fish, you can learn from our article. 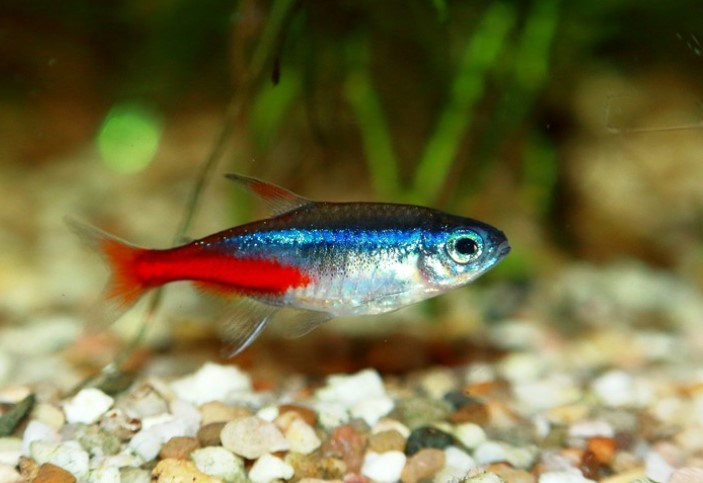 Neon Tetra is a freshwater ray-finned fish from the Kharacin family. The species got its name for an unusual shiny strip along the body, which, when hit by light, flashes like a light. This phenomenon is reminiscent of the bright and catchy lights of neon advertisements in the night city.

Neon is perhaps the most popular fish of its family. And it’s not just the amazing color of the body. The calm nature of the fish allows them to be kept with most of the peaceful tropical species. Neons do not spoil living plants, therefore they are often used by professional aquascapers in their work. 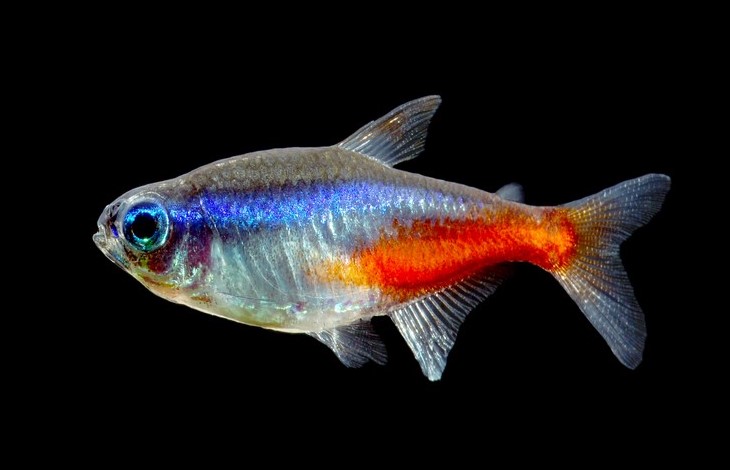 Neon Tetra has a slim and graceful body. The size of the fish is quite small: females grow up to 4 cm, males are slightly smaller. On both sides of the body, there is a luminous blue stripe that shimmers with a green or blue tint in reflected light. Under it is the second stripe – scarlet, stretching from the middle of the body to the tail (by this feature, blue neon is easy to distinguish from red, in which a red stripe stretches throughout the body). The fins of the fish are small and almost transparent. But there is also a veiled form. 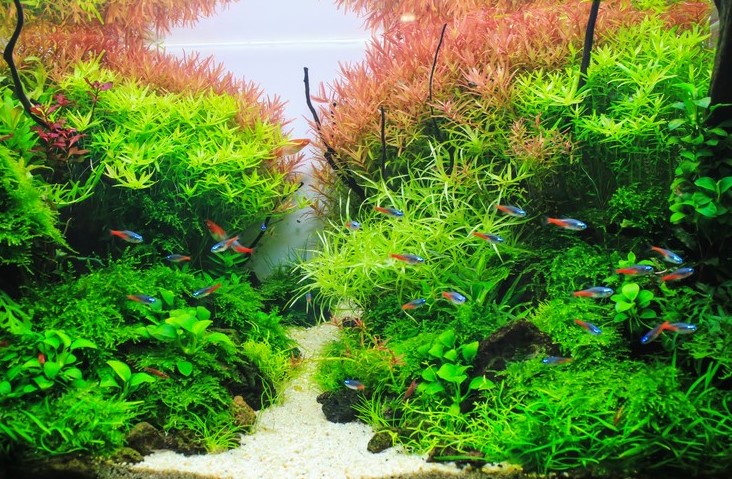 Neon Tetra was discovered by the French explorer and adventurer Auguste Rabot during his expedition to the Amazon basin. It is believed that he first saw this fish in the settlement of one of the Indian tribes when he was sick with a fever. His sharp mind immediately realized what profit such unusual fish could bring, and a year later, the researcher established regular supplies of “wild” neons to America and Europe. The fish have really made a splash among hobbyists. It was not possible to get offspring of blue neon in captivity, and since Rabo carefully concealed the habitat of the fish, for a long time he remained a monopolist in their supply.

Rabo sent several fish to his friend William Innes, publisher of the then-popular magazine Aquarium. Innes had not yet met such unusual fish in his practice, so he immediately sent them to the largest ichthyologist in the United States, Professor Myers, who finally made a scientific description and assigned a species name in honor of his colleague Innes – Hyphessobrycon innesi. A little later, the species was transferred to the genus Paracheirodon, where it remains to this day. 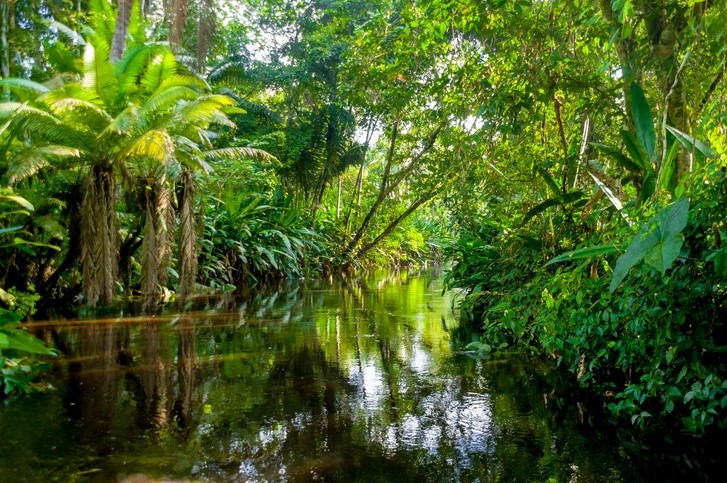 The homeland of Neon Tetra is the tropical part of South America, primarily the Amazon basin. A feature of the reservoirs typical for fish is soft and acidic water, rich in tannins and humic substances. This is due to the fact that the rivers flow under the dense canopy of the jungle. All leaf litter and dying branches fall to the bottom, where, rotting, acidify the water. Due to the thick layer of silt, it is difficult to wash out the mountain minerals, so the water hardness is very low. This is also facilitated by the abundant rains that fall on the territory during the wet season.

Neon Tetra live in flocks in small and calm backwaters.

Neon Tetra is a typical schooling fish, so at least 6 individuals must be kept in one aquarium. But flocks of 15 or more individuals look most impressive. The recommended volume of the aquarium is 50 liters. The presence of a cover is desirable, because, frightened, the fish can easily jump out.

Blue neons look best in dense thickets of aquatic plants, which can be diluted with natural stones and driftwood. It is better to use dark soil, so the fish will look brighter.

It is not recommended to plant Neon Tetra in fresh aquariums; stable water parameters are very important for this species. The aquarium must be equipped with a filter, compressor, and thermostat because these tropical fish love clean and warm water. Lighting should be moderate.

Once a week, a water change will be required – up to 20% of the volume of the aquarium. The addition of Tetra ToruMin conditioner will have a positive effect on the well-being of the fish. The natural peat extract contained in it allows you to create “black” tropical water, similar to natural. 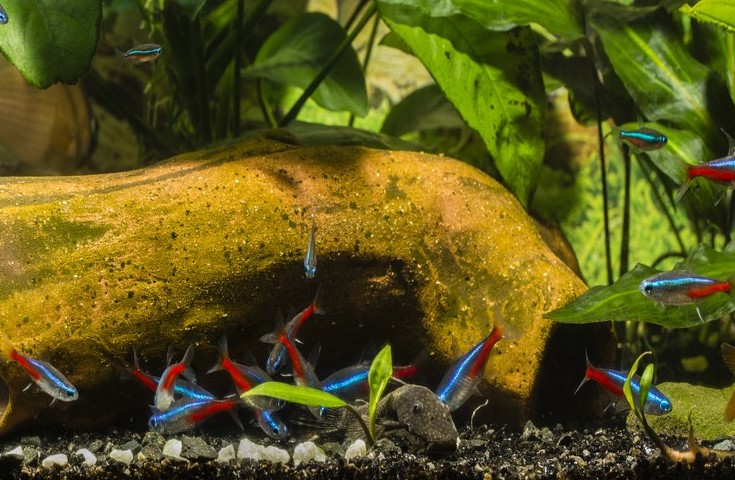 It is necessary to exclude cohabitation with large and aggressive species that will perceive small neons only as food. 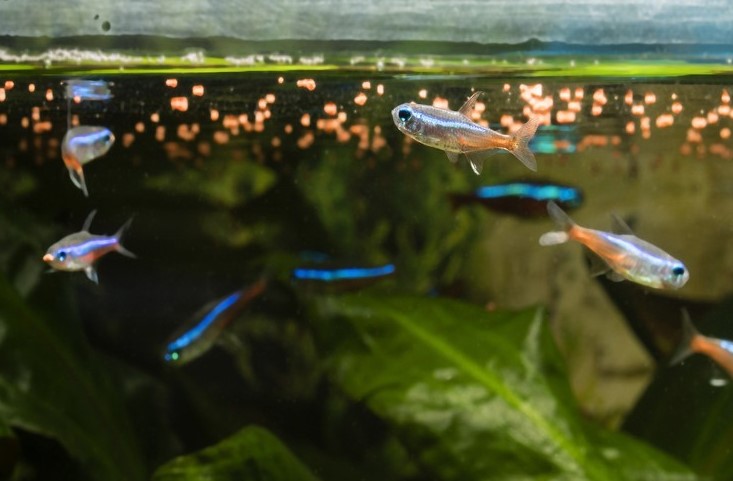 The good health and longevity of Neon Tetra also depend a lot on proper nutrition. It is best to exclude live and frozen foods from their diet, which do not provide the fish with a balanced diet and in many cases are potential sources of infection in the aquarium. But high-quality dry food, on the contrary, will be most suitable. They prefer to eat neons in the upper and middle layers of the aquarium, it is also necessary to take into account the small size of their mouth.

TetraMin Mini Granules is a complete mini-granule food for small freshwater ornamental fish. Made from over 40 types of quality raw materials. The granules soften quickly and sink slowly. Contains prebiotics for comfortable digestion.

TetraPRO Energy Multi-Crisps is a high-quality complete feed, which is made using gentle low-temperature technology, which allows you to maintain its high nutritional value. Energizing Concentrate gives neons vitality.

Neons are prone to overeating, so it is best to feed the fish once a day with a portion that will be eaten for a few minutes. 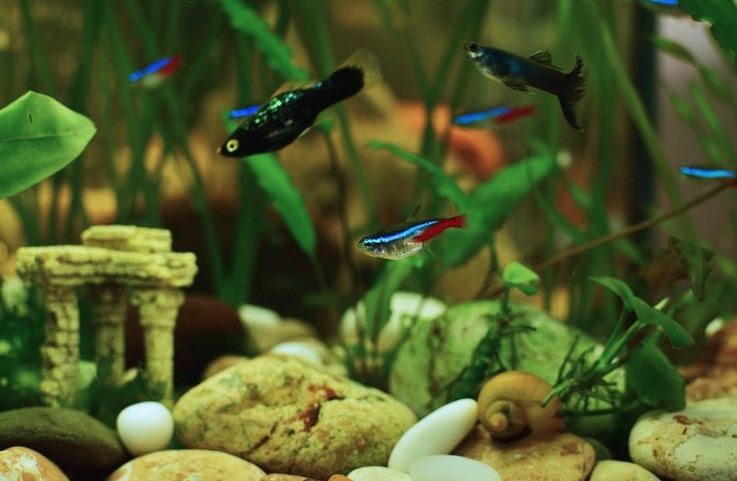 Breeding Neon Tetra at home will take some experience. The problem is that at high levels of hardness (more than 4 °), the eggshell becomes impermeable to sperm and fertilization does not occur.

A small aquarium of 10 liters or more is used for spawning. A separator mesh is placed on the bottom. The filter cannot be installed, since the neon larvae are extremely small and can easily be sucked in. Light aeration is allowed. The water in the spawning aquarium should have the following parameters: T = 22-24 ° C, pH = 5.5-6.5, GH <4. Its level should not exceed 10-15 cm.

Producers are separated in advance and fed abundantly. It is best to plant the male and female in the spawning grounds late in the evening. Spawning itself usually takes place in the morning. The female is able to lay up to 150 eggs. After the “parents” are set aside, and the aquarium is darkened since bright light is harmful to the eggs. Incubation lasts about a day, then the larvae feed on the yolk sac for 4-5 days, after which they switch to independent feeding. In a spawning aquarium, gradually increase the rigidity. The shading is left until the fry are strong (up to 2 weeks).