Shark balu (shark Barbus or shark Bala) is a peaceful schooling fish, which got its name for its recognizable body shape – elongated, with a characteristic dorsal fin. However, this is where her resemblance to a sea predator ends. Aquarists appreciate the ball for its peaceful nature and the ability to get along with any neighbors that are suitable in size and temperament.

Shark balu (also lat. Balantiocheilos melanopterus or Russian. Balantiocheilus blacktip) is a representative of the carp family, quite popular among novice and experienced aquarists, despite its large size and schooling character. Their unusual shape and pleasant contrasting color set them apart from their aquarium neighbors.

By the way, the ball lives for a very long time: in comfortable conditions – up to 10, or even up to 12 years. 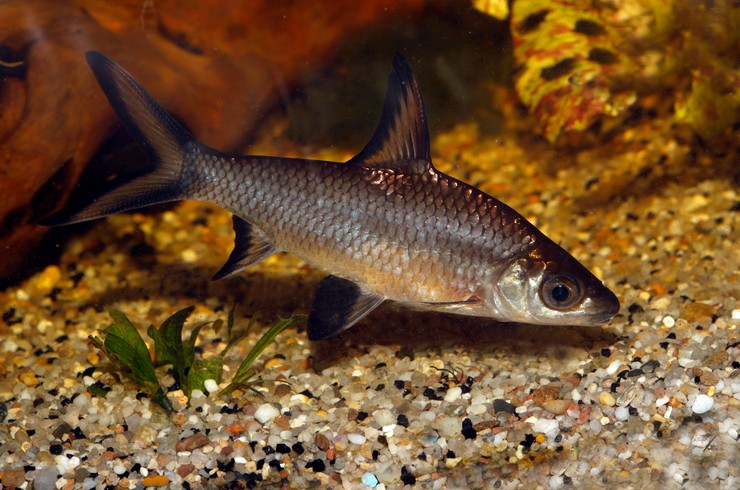 The ball was first described by Peter Blacker in 1851. A Dutch physician and ichthyologist suggested that these fish come from the Mekong River basin in Thailand, but later scientists were able to prove that this is not the case.

Currently, the shark balu is listed in the Red Book due to the pollution of waters in its habitat, so you can often find specimens grown on farms on sale.

These fish are easily recognizable by their elongated torpedo-shaped body, shiny silvery scales and, of course, the characteristic dorsal fin – high, raised upwards. All fins are transparent or have a yellowish tint, smoothly turning into a contrasting black border around the edges. The scales are almost monochromatic: it darkens quite a bit on the back and brightens on the abdomen. Another recognizable feature of the shark ball is its large eyes, which help to find food in the water column. 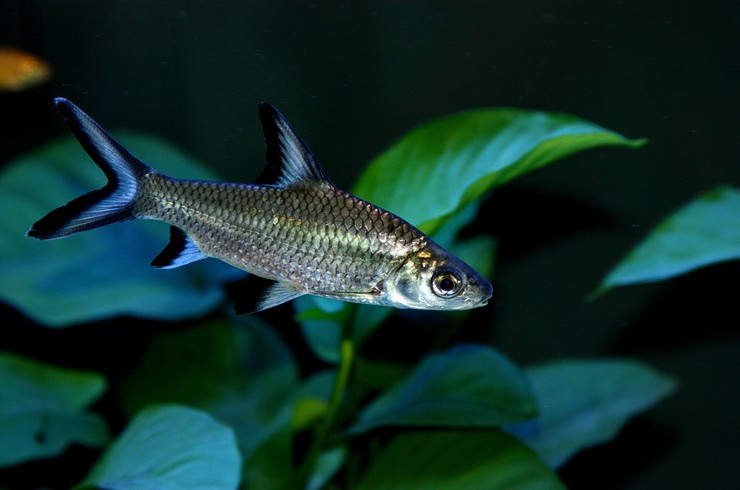 Baloo is a fairly large fish. In nature, it grows up to 35 cm, in captivity, it usually grows up to 25-30 cm (depending on the size of the aquarium). In combination with the schooling character, this largely determines the conditions of detention – the barb needs a spacious aquarium.

These fish should not be housed singly or in pairs. There must be at least 5 individuals in the flock – otherwise, the dominants will start to bully the weak and show aggression towards their neighbors. A flock that is too small also causes nervousness and illness.

Until 2007, it was believed that the shark baloo lives in nature in the Mekong River basin in Thailand, but later this theory was refuted. Balu is home to Southeast Asia, Sumatra Island, Borneo, and the Malay Peninsula.

The fish prefers clean river water, but can also live in lakes. It mainly occupies the middle layer of water, but in search of food, it often sinks to the bottom or rises to the surface. 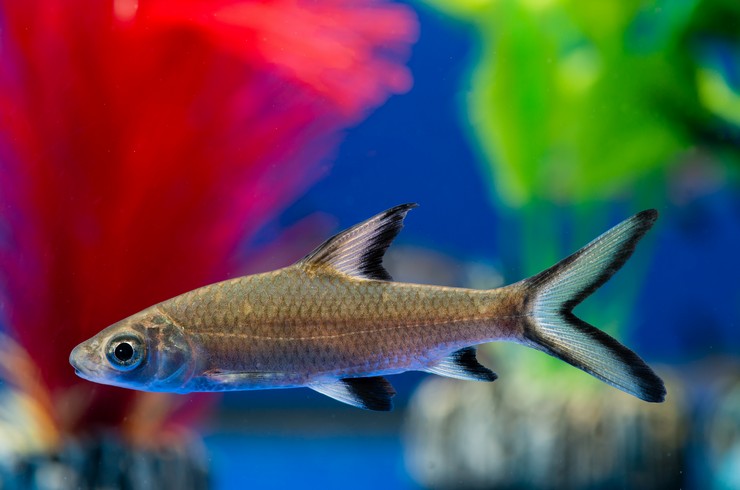 The first thing to consider when choosing and arranging a “home” for your new resident is its size. Individuals of 30 cm, huddling in flocks (which should consist of at least 5 fish) and quite active, require a spacious aquarium. For youngsters, you can choose a model with a capacity of 300 liters, but it is better to take a closer look at 400 liters (or even more) aquariums.

Representatives of this species are very fond of swimming space – so the aquarium should not only be large but also wide enough, with plenty of free space. 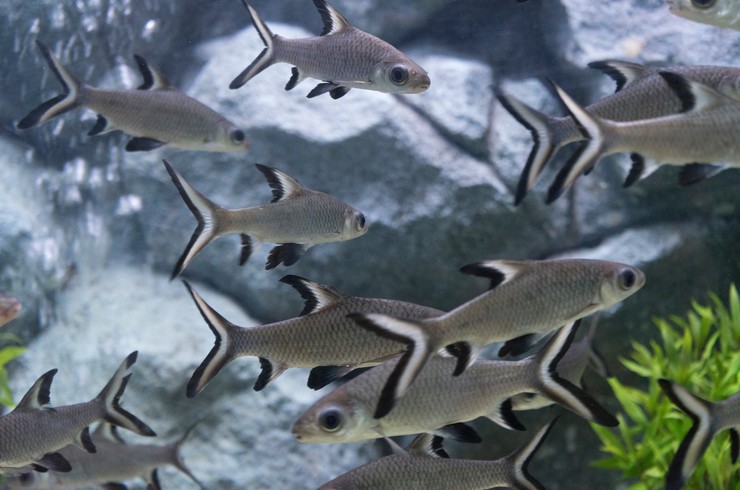 Another important requirement is the presence of a cover. Baloo is rather shy (especially at the beginning) and active, and therefore often jumps out of aquariums if they are not closed.

As a freshwater river fish, balu is demanding on the purity of water and its saturation with oxygen. Therefore, the filtration and aeration system in the aquarium must be efficient enough.

Also, do not forget about lighting – especially since it will help you see all the beauty of the silver-mirror scales.

Special attention will be required to the ball during the adaptation period until they are used to the aquarium content. Within a month after the purchase, representatives of this species may be frightened of a sudden change in the level of illumination, sudden movements, and new conditions for them. When stressed, they often try to jump out of the aquarium – or hit glass. Therefore, when feeding or cleaning, try to keep stressors to a minimum.

When setting up your aquarium, make sure there is free-swimming space: avoid lush thickets and an abundance of decor. Large driftwood at the wall for decoration and a few hard-leaved plants that provide shelter for the fish – this set is quite enough. Do not choose soft and delicate plants – balu can damage them while looking for food. The best compatible with these little sharks are Anubias, Klinum, Echinodorus – persistent and unpretentious.

The choice of the substrate does not really matter – the ball is not affected when looking for food, but experts recommend dark types of soil for aesthetic reasons. Balu’s mirrored scales stand out best against such a background.

Shark balu is a large, but peaceful fish. She easily gets along with any neighbors of similar size. 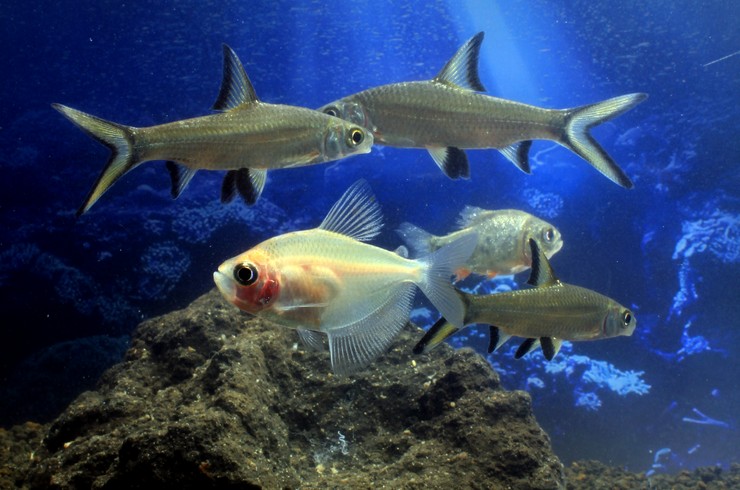 It is better if the other fish in the aquarium are the same or slightly larger than the Barbus – the silver shark can take too small fish for food and eat with pleasure. The same goes for small viviparous fish.

Other varieties of balu are ideal companions for this species. They are no worse adjacent to catfish, tetras, rainbows, rasbora, minors, and gouras.

It is a bad idea to house these fish with territorial species (such as cichlids) or, on the contrary, too phlegmatic ones – for example, scalars. In both cases, the less active species will feel uncomfortable in the aquarium, attacked and hurt.

The natural diet of the shark ball is very diverse: worms, insect larvae, pieces of living plants, algae. Like most cyprinids, the fish are very voracious and are constantly in search of food.
But despite the excellent appetite, the stomach of the fish is rather weak. Therefore, they are contraindicated, for example, bloodworms, which are poorly digested and can lead to digestive disorders. Do not forget that live food carries the danger of infecting fish with infections and parasites

For the full growth and development of the shark ball, it is better to opt for high-quality dry food. They are convenient to use, easy to store, safe, and balanced.
Shark bay prefers to pick up food in the water column, so it is best to choose food that will slowly sink to the bottom. Depending on the size of the fish, TetraMin Granules (for young fish) or TetraMin XL Granules (for adult fish) can be used. The pellets soften quickly and sink slowly, making them ideal for fish feeding in the middle layers of the aquarium. The food is made from more than 40 components and fully satisfies the nutritional needs of “sharks”, supports the immune system, and ensures the purity of water by reducing fish waste.

The pellets can be periodically changed to TetraMin Nutritious Flakes or TetraPro Energy High Energy Chips for Moving Fish to diversify the diet.

Plant food should be up to 10% of the daily diet of a shark ball. Often, lettuce, spinach, and dandelion leaves are used for this. However, these components left in the aquarium for a long time can degrade the water quality. It is best to feed your fish with chips that are high in spirulina algae, such as TetraPro Algae.

Sometimes it will not be superfluous to pamper the fish with a jellied brine shrimp delicacy – Tetra FreshDelica Brine Shrimps.

It is best to feed the fish 2-3 times a day with a portion of food that will be eaten in a few minutes.