The choice of aquarium snails is currently not so great. But among them, nerItin`s stand apart, the color of which is unusually beautiful. You will learn about the correct content, feeding, and reproduction of these beauties from our article.

Neretina is a large group of snails that live both in freshwater bodies and in the seas. The snails are named after one of the sea deities of Greek mythology. In folklore, he was described as a young man of stunning beauty.

Freshwater species are widespread in the aquarium hobby due to their high decorative qualities and their ability to eat algae.

Neretina is peace-loving snails, predominantly nocturnal. They are of great benefit to aquarists, destroying algae, while doing it very delicately, without damaging the plants. Unlike many other aquarium snails, they do not breed in large numbers, which makes them even more attractive.

Neretina snails have an ovoid or round shell up to 3 cm in size, which is a real work of art. The color is dominated by bright shades: orange, green, red, and others. Various points, ovals, stripes, horns, and outgrowths serve as additional decoration. There are hardly two snails with the same shell pattern. 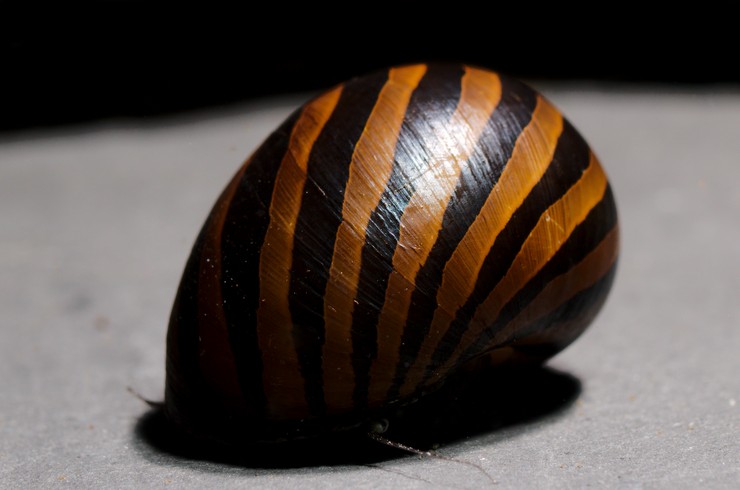 The lid that covers the shell mouth (operculum) is quite small. The leg and head of the mollusk are almost completely covered by the shell. They are black or brown in color. On the head are filiform antennae, eyes on small tubercles, and a rounded mouth.

Sexual dimorphism is not expressed.

Habitat
Neretina is common in South Africa and Southeast Asia. They can be found in ponds, lakes, rivers with fresh, brackish, or saltwater.

Snails live on a rocky bottom in places with a large number of snags and aquatic vegetation. They are not found at great depths, because they feed only on algae that need sunlight.

In general, nerItin`s are considered unpretentious gastropods that adapt well to life in various aquariums, but there are a few nuances worth considering.

Despite its small size, herein should not be kept in cramped conditions. This will inevitably provoke increased food competition, and the imbalance can be caused by overpopulation. The recommended volume for keeping one neritina is 8-10 liters. The aquarium should be equipped with a lid, as snails can accidentally get out of the aquarium and die.

Any substrate that is suitable for growing aquarium plants is suitable. The level of lighting is indifferent to snails.

Neretins do not like aquariums with a high content of nitrogenous compounds, so they can only be settled in a container with an established balance and remember about weekly pod changes (20% of the volume of the aquarium).

A filter must be installed in the aquarium and water aerated. 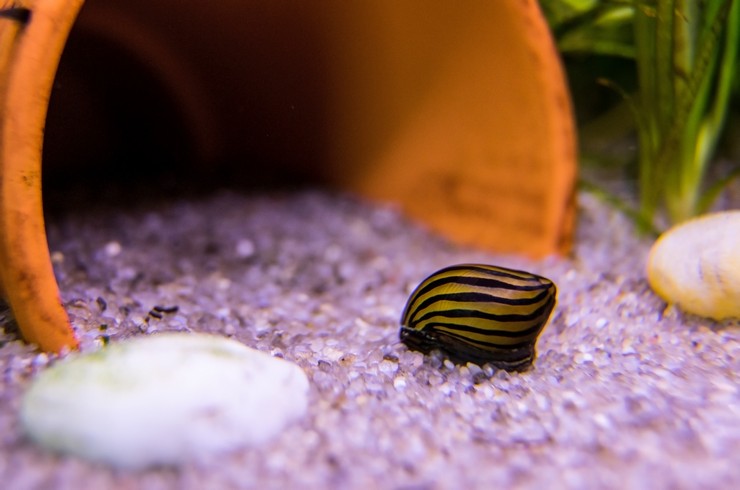 The most comfortable temperature for these tropical mollusks is 22-27 ° C. It is best if the water is moderately hard (up to 20 dGH) and alkaline (pH = 7.5-8.0). In acidic water with a lack of minerals, Neretina often has problems with shell formation.

Like other invertebrates, retains are unusually sensitive to medicinal preparations containing copper. Therefore, if you need to treat fish, be sure to make sure that the drugs do not harm these mollusks.

Often, the retina dies almost immediately after being placed in the aquarium. This is usually associated with a sharp change in water parameters, which is poorly tolerated by snails. It is also worth noting that it is better to launch the snails into the aquarium carefully, with the mouth down. Unfortunately, it is difficult for these mollusks to roll over on their own, which can lead to death. If the snail has died, remove it from the tank as soon as possible. The long-term presence of the dead neritina in the container will worsen the quality of the water, and it itself will acquire an unpleasant odor.

Neretina snails are peaceful creatures that cannot harm any inhabitant of the aquarium. The same cannot be said for some possible neighbors.

It is best to keep neretin with small ornamental fish or invertebrates. These can be viviparous Cecilia, tetras, iris, barbs, catfish. 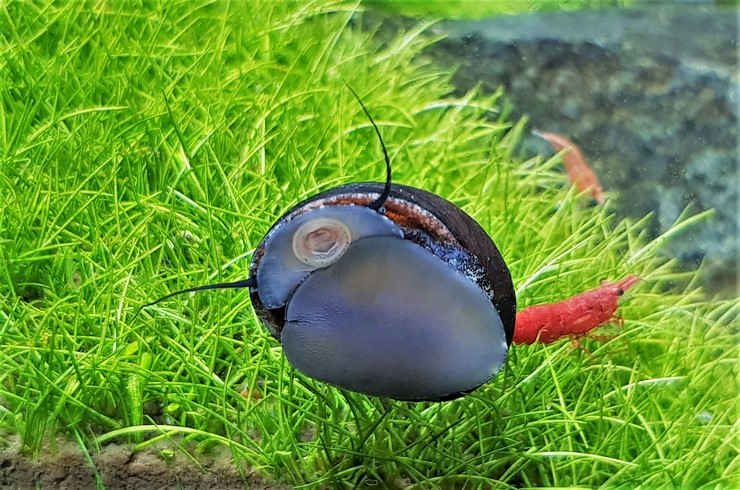 Unwanted roommates are large predatory fish that can eat a snail at the opportunity, as well as species that deliberately eat mollusks – bodies, tetrapods. Helen’s predatory snails are also best removed from the list of possible neighbors. Neretina can live with other snails that eat algae (ampulla, fiza, etc.), but we must not forget that there will be competition among these species for food resources, so much a neighborhood is possible only in aquariums of sufficient volume.

Neretina is completely herbivorous snails that feed on algae and dead parts of aquatic plants. They do this with enviable zeal, quickly cleaning the glass of the aquarium, soil, and decorations from plaque. At the same time, the living plants of the snail themselves are not damaged at all, which makes it possible to keep them in herbalists. However, it should be understood that retains are only helpers in the fight against algae, but not a panacea. To get rid of the lower plants, it is necessary to find the cause of the imbalance in the aquarium and eliminate it. 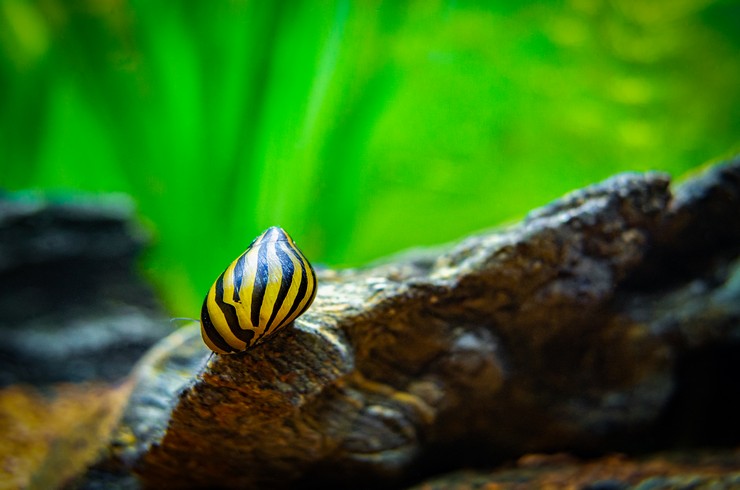 In some cases, additional feeding of snails is necessary. For this, feeds with a high content of spirulina algae are used, such as TetraPro Algae Multi-Crisps or Tetra Pleco Spirulina Wafers.

Neretins have one interesting feature that shouldn’t be scared at all. Sometimes they stop in one place and for some time (up to a couple of days) do not move at all. From the outside, it may seem that the snail has died, but do not rush to draw such conclusions, over time the mollusk will continue to go about its business.

Breeding neretin snails at home is a relatively complex process. This is due to the fact that the eggs are incubated in saltwater, after which the young individuals return back to freshwater.

Snails are dioecious, but there is no sexual dimorphism, so about 10 individuals should be planted for reproduction in order to be sure to guess with the sex.

The caviar of the Neretina is rather peculiar. It is deposited on hard surfaces in the form of dense white dots up to 3 mm long, which are difficult to separate from the substrate.

After finding eggs, they are transferred to a separate aquarium together with the decorative element. This must be done no later than the third day after laying eggs. Next, a little salt is added to the water in the aquarium with eggs.

It is worth noting that large quantities of neretin caviar can disrupt the aesthetics of the aquarium, and many hobbyists do not like it.