The rivers of South America are famous for their large and colorful cichlids. Many aquarists are willing to keep them, even though these fish need to be housed in large aquariums and poor coexistence with other species. In this article, we will talk about the turquoise cichlid (Andinoacara rivulatus) – one of the smartest and most attractive cichlids on the South American continent.

Western aquarists often call this fish “Green Terror” – the green terror. The turquoise acara received such a nickname for its rather aggressive behavior, especially during the spawning period. But the intolerable character does not stop connoisseurs of this fish at all, because its color with a greenish-blue metallic sheen will not leave anyone indifferent. 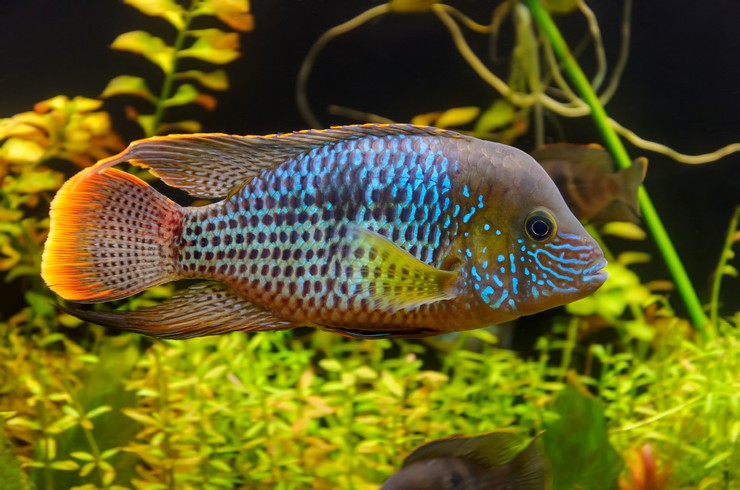 Do not confuse turquoise acara with bluish spotted acara. Previously, they were attributed to one species, but later they were divided according to a number of morphological characteristics. 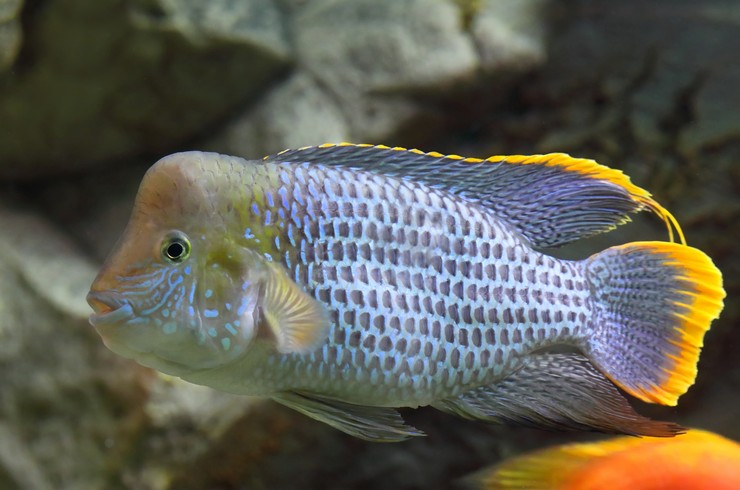 The homeland of turquoise acara is the Pacific part of South America: from the Tumbes River in Peru to the Esmiraldes River in Ecuador. The first scientific description of turquoise acara was made by the British ichthyologist Albert Gotgelf Gunther in 1860. The very name of the genus “Akara” is translated as “stream”.

Akari lives both in transparent and in “dark” water saturated with humic substances.

To keep the turquoise fish, first of all, you need a spacious aquarium. It is better if the volume of water for a pair of fish is at least 300 liters. For effective water purification, a high-performance external filter must be used. It will allow not only to collect various suspensions in the water but also to prevent an increase in the concentration of hazardous products of nitrogen metabolism in the aquarium, due to the vital activity of beneficial nitrifying bacteria. You should also install a powerful compressor that will enrich the water with oxygen, which fish and microorganisms need to breathe.

The most suitable decorations for keeping cancer will be sandy soil (or large pebbles), stones, and natural driftwood. The lighting shouldn’t be very bright. 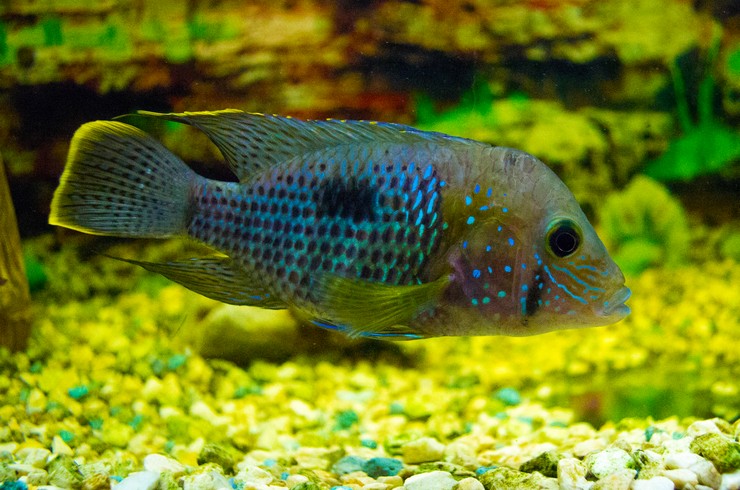 Thus, the water needs soft and slightly acidic/neutral, which is typical of many inhabitants of the reservoirs of South America.

Unfortunately, planting live plants in an aquarium with turquoise fish will in most cases not be advisable, since fish are constantly digging up the soil. If desired, you can use species with hard leaves, for example, Anubis, which must be tightly fixed to prevent floating to the surface.

The fish very often exhibit increased aggression towards the neighbors in the aquarium, therefore, their selection must be approached very carefully. It is not uncommon for cancer to end up completely alone in the aquarium.

First of all, all fish living with Akara should be proportionate. Any small species (and even medium-sized ones) will sooner or later be eaten. Ideally, if the fish and the planned neighbors live in a common aquarium as fry and develop together, this will reduce the overall aggression. The aquarium must be equipped with a wide variety of shelters, and its volume must be sufficient for the life of large fish. You can keep Akara with some South American cichlazomas (several, meek, eight-striped, astronauts) and large catfish (for example, pterygoplicht).

During spawning, akharas become more aggressive towards neighbors. If the male and female begin to prepare the nest for spawning, then any species that allows itself to approach it will be immediately attacked.

Also, turquoise cancers have a well-developed hunting instinct, so they need to be fed regularly and enough, otherwise, they may pay attention to other species that live with them in the aquarium.

The natural diet of turquoise cancer consists mainly of small fish, insects and their larvae, worms, and other invertebrates. Acars are not picky and in an aquarium, they eat well all types of food: live, dry, frozen. Many aquarists practice feeding adult cancers with lean marine fish and shrimp. It is also believed that large cichlids can be fed with fine dry cat food, which, of course, is a misconception, since such a diet does not take into account the specific nutritional needs of fish.

For the correct selection of food, it must be borne in mind that turquoise fish are predatory fish, which means they need a large amount of protein. The size of the food should also be suitable, as large adult specimens have a rather largemouth.

A good choice for feeding turquoise crayfish would be Tetra’s high-quality dry cichlid food – Tetra Cichlid. Adults are best fed the large floating Tetra Cichlid Sticks. They are on the surface of the water for a long time and, due to their shape, resemble the natural food of large fish. A complete food enhances the natural color, vitality of fish, and resistance to disease. For growing cancers, it is best to opt for Tetra Cichlid XL Flakes or Tetra Cichlid Mini Granules.

It is necessary to feed turquoise crayfish several times a day. Hungry fish may show a hunting instinct, and then they will start attacking neighbors.

Breeding turquoise Akara is usually not difficult. The biggest challenge is finding the right pair. The female chooses a partner for herself, so usually you have to wait until the flock of young fish breaks up into pairs. Cancers become sexually mature at about 8 months of age.

Spawning in turquoise cancers is usually spontaneous and does not require special conditions. If the pair is close to each other and ready to spawn, you can stimulate it with a slight increase in temperature and a large water change. Next, the fish choose a flat surface, for example, a stone, where they will later lay eggs. If there is nothing like this in the aquarium, then a hole is dug in the ground and the caviar is glued directly to the glass. On average, a female spawns up to 300 eggs per spawning.

Turquoise cancers have a pronounced parental instinct. Both the male and the female take care of the eggs: they create a flow of water with their fins and remove dead eggs. In very rare cases, parents may try to eat caviar, then it is necessary to transfer the stone with the remaining eggs to a separate aquarium as carefully as possible, provide aeration and add antifungal drugs.

The development of eggs lasts about four days; the larvae that appear do not swim but remain attached to the substrate. 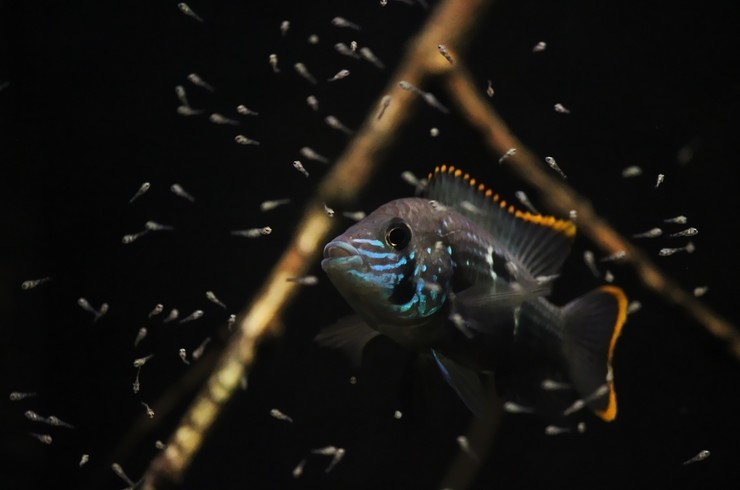 After 3 days they become full-fledged fry and are ready for independent feeding with “live dust”, brine shrimp nauplii, and high-quality dry food.