Affenpinschers are small energetic dogs with a very extraordinary appearance. At home, in Germany, they are called “monkey dogs” because of the special structure of the muzzle, curiosity, and habits. In France, they were dubbed “black demons”, wanting to emphasize their activity, stubborn disposition, and unique appearance. Once upon a time, Affenpinschers were excellent rat and mouse hunters. People do not need such workers for a long time, but the breed has not been lost, but on the contrary, has become even better and acquired new qualities that are inherent in companion dogs. 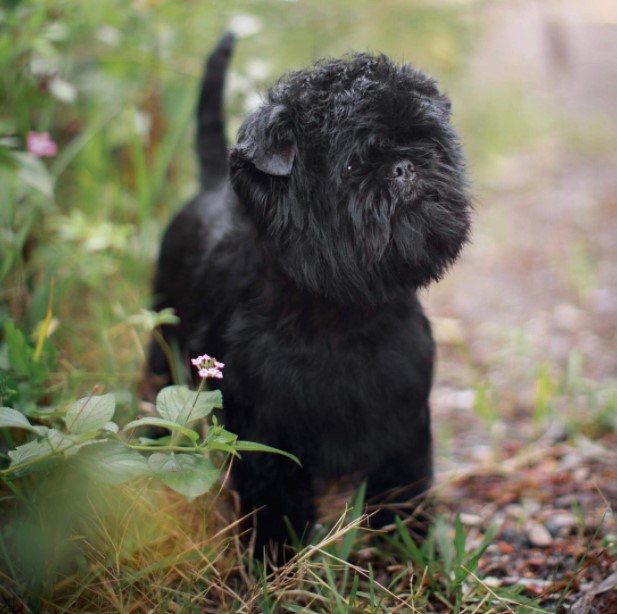 The history of the breed goes back more than one century. In the Middle Ages in Germany, many farmers bred energetic little hunters for the home and farm, who could deftly catch rats and mice. Later, such dogs were popular in the cities. They were undemanding in maintenance, ate little, and destroyed rodents without fear and tired. Scraps of surviving evidence suggest that Affenpinschers are descended from rural dogs such as Schnauzers. Pugs, Silky and German Pinschers, and later Belgian Griffons took part in the breeding of the breed.

There is nothing mysterious in the name of the breed. The word “Affen” is translated from German as “monkey”. The features of primates in appearance are obvious: a short muzzle, dark eyes, a small nose, and short jaws with a prominent lower lip. Pinschers are a group of breeds that were bred for the protection and catching of rats.

The first standard for Affenpinschers was developed in 1902. The final was approved in 1913, and in 1936 the breed was first included in the English breeding lists. But it is worth noting that many attempts to import dogs to the islands of the United Kingdom and attempts to popularize the breed have been unsuccessful. In the United States, Affenpinschers were brought in from Germany in 1935 and a year later the breed was recognized in the American Kennel Club.

The ranks of Affenpinschers have noticeably thinned after the Second World War. The breed practically disappeared, but by the mid-50s, enthusiasts were able to revive the population. The emphasis was on correcting deficiencies, approximating the temperament of decorative dogs, and improving appearance. The selection involved dogs with good characteristics of black color. Only in 1992, international canine organizations recognized that the Affenpinscher breed had already reached the level that allows it to participate in championships, but it did not gain much popularity.

Affenpinschers are small, strong, harmoniously built dogs of a square format with a dry type of constitution, very mobile. The skeleton is thin, the musculature is moderately developed. Males are larger and more masculine than females. Height – 25-28 cm, weight – up to 6 kg.

The small head is set high. The forehead is wide, convex. The muzzle is short, not too broad, tapering slightly towards the nose. Well filled in the eye area. The upper jaw is slightly shorter than the lower jaw, which emphasizes the rounded chin. The lines connecting the nose to the eyes form an equilateral triangle. Ears are small, set high, erect or semi-erect, turned forward. The eyes are medium, rounded, set straight and low, set wide apart. The eyelids are pigmented. The teeth are small but strong. The bite is a dense undershot. When the jaws are closed, the teeth should not show.

The neck is short, almost straight. The back is strong. The topline is straight. The loin is short, slightly arched. The croup is round. The chest is broad and strong with round ribs. The abdomen is moderately tucked up. The front and hind legs are placed under the body, straight. Paws are small. Nails and pads are black.

The coat of an Affenpinscher consists of a soft, dense, short undercoat and a wiry guard hair of unequal length on different parts of the body. On the body, the hairs are about 2.5 cm long, on the neck, chest, head, abdomen, and limbs it is longer. On the head, the hair forms eyebrows, mustache, and beard. There may be a small collar around the neck. According to the standard approved by the FCI, the Affenpinscher can be of only one color – black with a black undercoat. 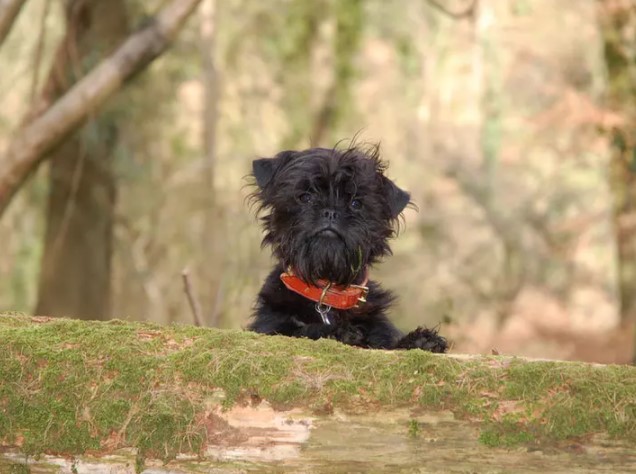 These dogs are distinguished by a truly Pinscher attitude to life. They are by no means sofa pets, they bark a lot, frolic, run and rush to prove to everyone that they are real family members and defenders whose opinion is worth reckoning with. Affenpinschers are smart and independent, curious and gambling, dexterous and very courageous, and sometimes even daring. Therefore, the owners should make sure that the little fighter does not decide to attack a larger brother. There is fearlessness, vigilance, and stubbornness in their character. Another negative trait is greed and excessive guarding instinct. The dog is very jealous of his food, bedding, toys and zealously protects them.

Among the family, Affenpinschers are often affectionate and obedient, very loyal. Affenpinscher will do his best to protect the home, family, and property. It will always notify guests about unusual sounds or approaching with loud barking. Easily adapts to surrounding conditions and new surroundings. It rarely gets along with small rodents, birds, and cats. There is a chance that the neighborhood will be peaceful with another dog. 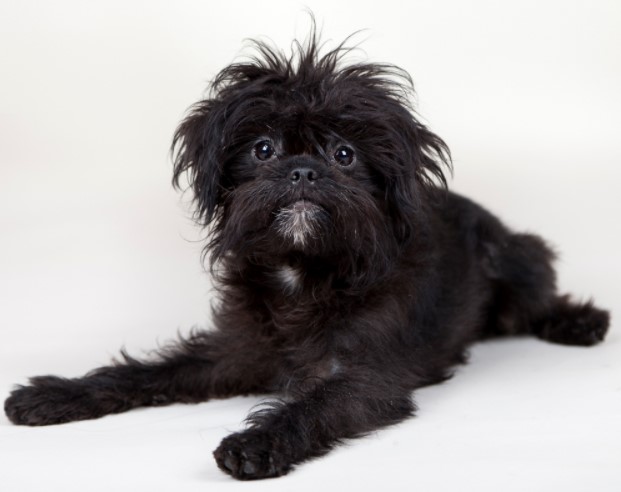 Caring for representatives of the breed of medium difficulty. The pet is combed once a week. More experienced owners resort to stripping, a technique for removing overripe hair by hand. This is believed to help maintain the correct structure of the coat. The wool needs to be cut periodically. Particular attention is paid to the head. If the dog is not showing, trimming the entire body is optional, but it is advisable to trim the hair in the anus and genitals. Bathe your dog as needed, usually once a month. Shampoos are used for wire-haired black dogs. After washing, apply conditioners suitable for the breed.
Once a month, the dog needs to trim its claws if it does not have time to wear off during a walk to the optimal length. The eyes are washed daily with a special lotion to remove dust, hairs, and secretions from the cornea. The ears are cleaned about once a week. Oral hygiene is taught from an early age. To brush your teeth, use special toothpaste and brushes. 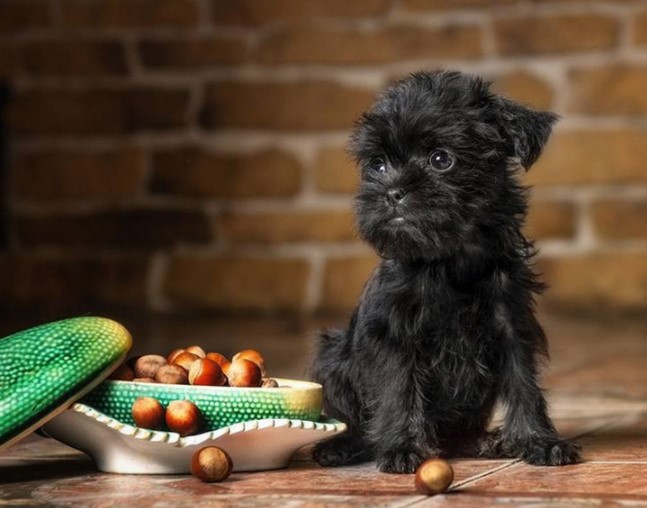 Affenpinschers live on average 11-14 years. Most health problems are associated with improper maintenance or nutrition, but there are some that are hereditary in nature:

The structure of the skull suggests possible breathing problems and profuse lacrimation. As prophylaxis for infectious and parasitic diseases, vaccinations, deworming are mandatory, and external parasites are regularly driven out.