Spawning fish tooth, better known as “killifish”, are a wide group of aquarium fish that fascinate with their beauty and amazing ability to survive in the most extreme conditions. The genus Afiosemion is rightfully considered the richest in variety and color, which includes about 90 species with a wide palette of colors – from fiery red to sky blue. Bright color and unpretentiousness make these fish a good choice for beginners, and simple reproduction of many species allows you to try your hand at breeding.

Afiosemions (Aphyosemion sp.) Are a genus of freshwater fish from the order Carp-toothed fish living in West Africa. They are found mainly in small, often drying up water bodies with a slight current.

The natural habitat of the fish is truly extreme. Significant temperature drops (up to 20 ° C), changes in the acidity and hardness of water, and in some cases even complete drying of water bodies are found everywhere in the territory where fish live. Thus, the entire life cycle is inextricably linked with the rainy and drought seasons, for which the fish are called seasonal. This rhythm has led to the fact that the killifish very quickly reach puberty, or the eggs are able to stay in wet peat for a long time before the onset of the rainy season.

Hierarchical connections in flocks of aphiosemions are very interesting. The main most energetic male has the advantage of feeding and breeding. It keeps near the spawning substrate and fertilizes females that are nearby. Other males can challenge his authority only through battle. But if fortune does not smile at the attacker, and he loses, then his color fades, and the fish itself will not eat for several days and will hide in a far and dark corner. But after a few days, the loser returns to the pack again, and the cycle repeats.

The taxonomy of aphiosemions is rather complicated and confusing. There are many interspecific hybrids on the market, as well as a variety of commercial names, making identification difficult. But nevertheless, even the most sophisticated aquarist will be able to find aphiosemion according to their tastes. 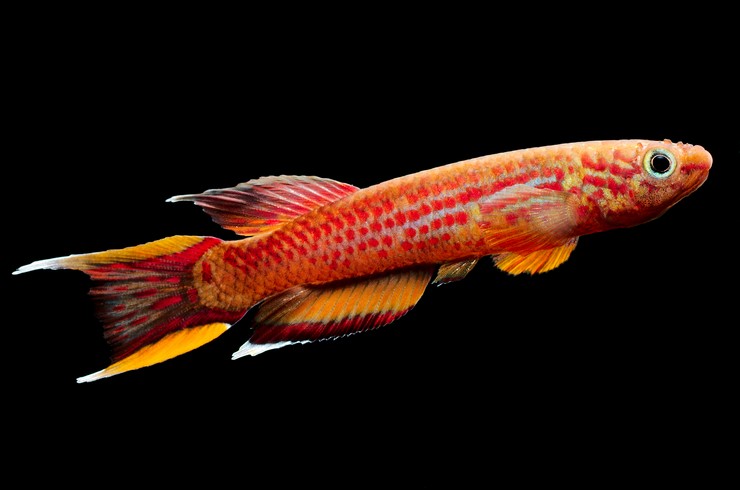 All types of aphiosemions have a similar body shape. It is elongated, slender, drop-shaped. The fins are powerful, the eyes are large. Particular attention is drawn to the caudal fin resembling a trident. Upper mouth – for the convenience of eating insects falling into the water. The dorsal fin is elongated and displaced towards the caudal. 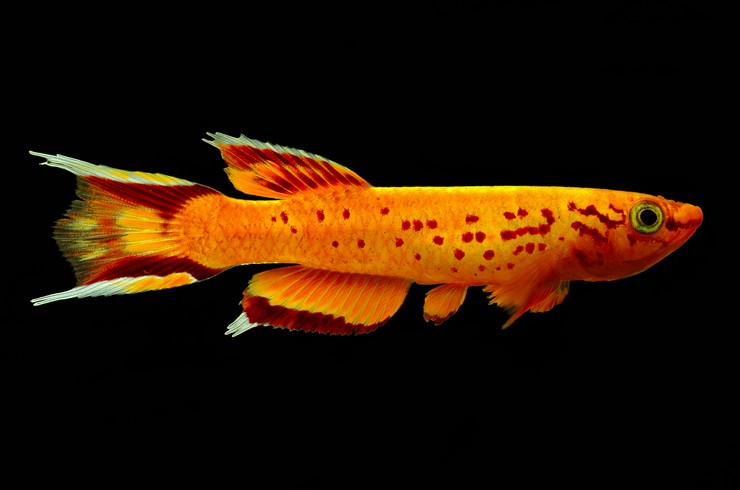 The color depends on the specific species, but males are always more elegant, have variegated fins. Females are inconspicuous. Unfortunately, color is not a strict systematic trait, therefore, it is not possible to determine the species only by color.

Most species can be found off the west coast of equatorial Africa. Typical inhabitants of small flowing and non-flowing bodies of water, which can dry up completely during a drought. The development cycle is associated with a regular change in the dry season and heavy rains.

Water parameters in water bodies of species’ habitats are subject to serious changes. As it dries, the hardness of the water increases very strongly, but with the arrival of rains, the dying parts of the plants decompose, which acidifies the water and saturates it with tannins.

According to the modern classification, the fish belongs to a different family, but most often it is found under the outdated name Afiosemion Gardner.

The homeland of the fish is the river systems of Nigeria and Cameroon.

The size of the aquarium does not exceed 7 cm. Males are larger than females and have more developed fins. The color of the body depends on the region of origin or the breeding form of the fish. Most often there are Gardner aphiosemions with steel or golden sheen. Common features are reddish-brown specks and brightly edged fins. Females are not as bright and have a brownish-silver body color. The spots are subtle or absent. 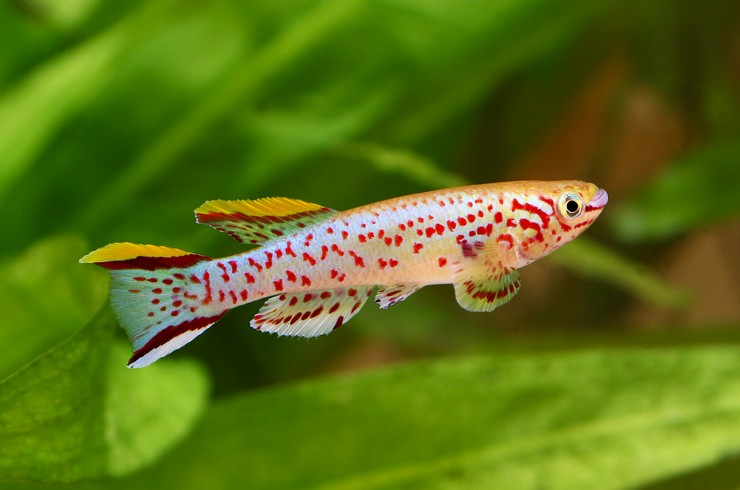 They are unpretentious in content, they get along well with live plants and calm fish. It is better to keep it in small flocks with a predominance of males. The minimum recommended volume for the aquarium is 60 liters.

Peaceful fish does not touch the neighbors in the aquarium. Fights are possible between males, but usually do not result in severe damage.

Eggs are able to remain viable for more than a month, being under dried peat or silt. Life expectancy is 2-2.5 years.

The fish range includes small bodies of water in the Congo and Gabon (Africa). It is most often found in the swampy parts of the rainforest in the plains and hills. Refers to an off-season Killie.

A small fish, the maximum size of which is about 5 cm. Sexual dimorphism is pronounced. Females are smaller, fins are rounded and almost transparent. The main body color is gray. Males are the owners of a brighter color: most of the body is sky-blue, in front of the body turning into green and yellow. The fins are elongated, in their color, there are red, blue, and yellow colors. Keeping in an aquarium is quite complex.

The average life expectancy is 2 years.

It is widely found in the marshlands of African countries such as Angola, Gabon, Cameroon, and Congo. It is one of the most popular aphiosemions in the aquarium industry.

The body is elongated, the forehead is flattened, with an upper mouth. The male is brown-red with red spots all over the body. A light blue spot can be found near the gill covers. The color of the fins coincides with the main color and has a purple stripe along the edges. Females are less bright: red dots are scattered over a light brown body, fins are rounded. In aquariums, fish can grow up to 6 cm. 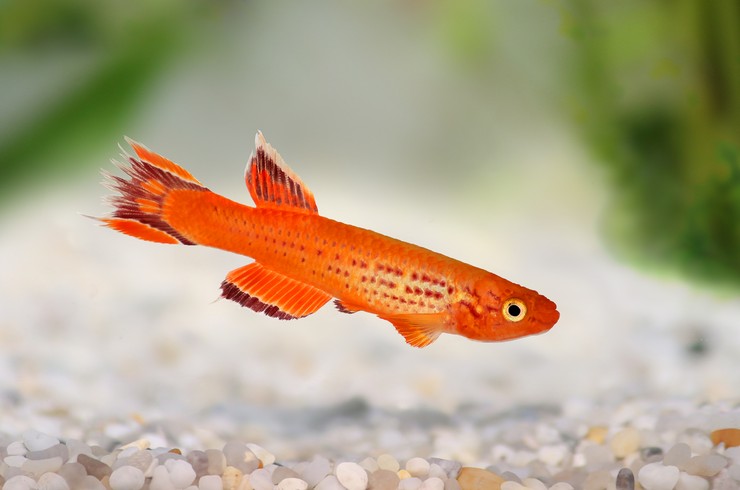 Afiosemions are fish of amazing beauty with unusual behavior. But in order for them to reach their full potential, they must be kept in certain conditions. Ideally, this is a biotope or species aquarium. Keeping a flock will allow you to observe hierarchical interactions between fish.

It is best to keep fish in flocks of at least 4 individuals with a predominance of females. The minimum flock is suitable for an aquarium of 60 liters. A lid is a must, as aphiosemions can easily jump out of the aquarium.

Fine dark sand or medium-sized pebbles are usually used as soil. The best decorations will be a variety of driftwood and a large number of natural plants that will be used by fish as natural shelters. In this case, it is necessary to leave a place for free swimming. Afiosemions do not like bright light; you can dim it with the help of plants floating on the surface.

Good filtration is a guarantee of good health of the fish, however, the flow from the filter should not be very strong, because these species prefer stagnant or slow-flowing bodies of water. Afiosemions feel most comfortable in aquariums with “dark” tropical water, you can use the Tetra ToruMin air conditioner to create it.

It is not recommended to keep aphiosemions in aquariums with temperatures above 24 ° C, this will greatly reduce their lifespan. Requires weekly water changes up to 30% of the aquarium volume.

It is best to keep aphiosemions in a species aquarium. Despite the fact that there are often clashes between males, they serve only to establish a hierarchy and are indicative, ending in a rather harmless way.

If you want to keep fish in a common aquarium, it is best to select non-aggressive neighbors of a similar size. Other types of afiosemions, rasbora, tetras, apistograms, catfish corridors are well suited.

It is not recommended to add veil fish, their gorgeous fins can suffer from the “teeth” of aphiosemions. And, of course, their joint maintenance with large predatory fish is contraindicated, which will perceive smaller neighbors as live food.