Aquarium fish are quite popular objects for genetic research. They are small, multiply rapidly and have a large embryo that can be easily manipulated. How the result of scientific research led to the emergence of a new group of ornamental fish will be discussed in our article.

GloFish is a proprietary commercial name for genetically modified aquarium fish. It consists of two English words – “glow” (to glow) and “fish” (fish), that is, literally “glowing fish”, which reflects the main property of these amazing creatures. In blue light or in ultraviolet rays, glofish fish begin to fluoresce and “flash” like bright lights. This became possible due to the introduction into the DNA of fish of genes of marine coelenterates (corals and jellyfish), which are responsible for the synthesis of fluorescent proteins. 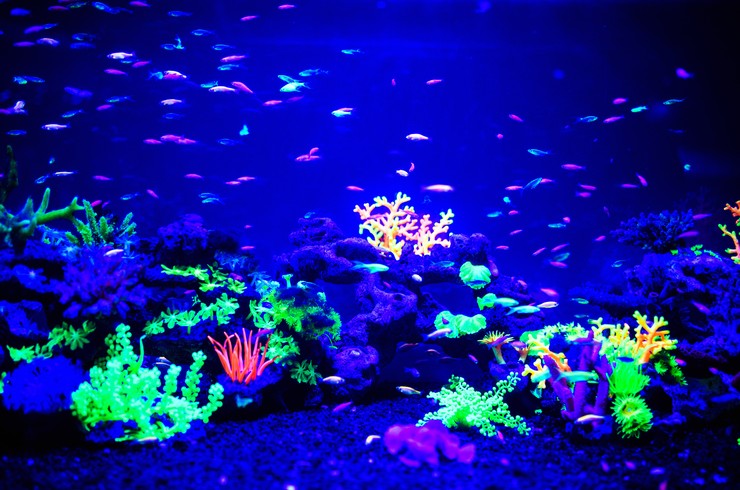 Glofish fish appear and develop naturally from parents with a fluorescent gene, that is, it is inherited. The fish are not artificially colored or injected with paint! They are not sterile; when the necessary conditions are created, they easily reproduce with the appearance of new bright offspring. Glofish fish are freshwater tropical species, the conditions of which do not differ from those of their natural relatives. The right aquarium volume, the necessary equipment, and established biological balance, and regular maintenance will guarantee a long and healthy life for your glofish pets. They are great for keeping in communal aquariums.

It should be noted that fluorescence is a fairly common phenomenon in natural fish species. A study by the American Museum of Natural History has identified over 180 species of fish from 50 families in the wild that begin to fluorescein blue light. In addition, this phenomenon is widespread in many corals, some insects, spiders, and even flowering plants. That is, biological luminescence is only the ability of cells of living organisms to “accumulate” light, and then give it away, which is absolutely safe and has nothing to do with, for example, radiation.

Thus, in addition to the bright, unusual color, the fish are completely indistinguishable from natural ones, but they allow you to create fantastic designs of aquariums that will appeal to both amateurs and professionals.

As noted above, during the daytime, glofish fish absorb light and then re-emit it. Therefore, during the day, the fish are best kept under a lamp with a blue spectrum lamp – it is he who gives them a stunning look, especially if there is dim lighting in the room where the aquarium is located. However, regular white light aquarium lamps will work as well, the glofish will still be able to “store” the light.

In the evening, it would be most optimal to use only blue lamps (many modern lamps have a similar night lighting function). By settling different types of glofish fish in the aquarium and using the right lighting and specially designed decorations, you can create truly mesmerizing landscapes that are in no way inferior in beauty even to marine aquariums.

Glofish fish in body shape do not differ at all from natural species. At the moment, you can find the following fish: zebrafish, barbs, thorns, labels, scalars, black-striped cyclases, as well as the medaka fish, which is popular in Japan. 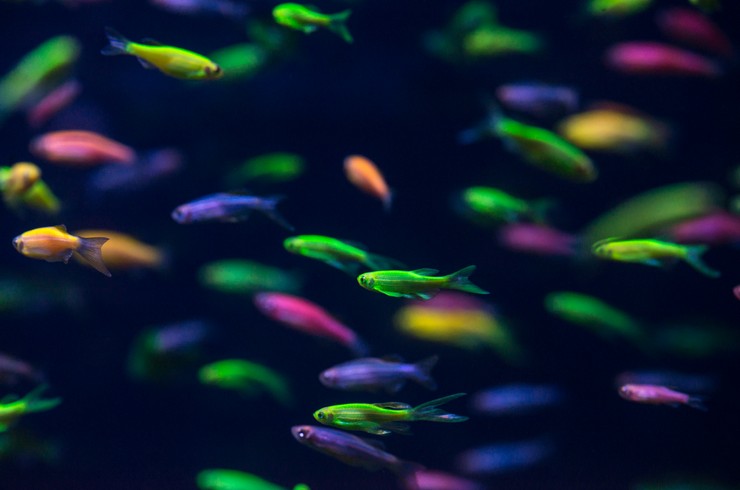 But if the shape of the body remains unaffected, then the color of the glofish fish boggles any imagination. Intense, vibrant colors that literally glow with the right lighting. Even the commercial names of the colors are very unusual: “Orange Ray”, “Electric Green”, “Cosmic Blue”, etc.

An interesting fact in the history of the emergence of glofish fish is that they were originally created not for amateurs of the aquarium hobby, but for solving specific scientific and practical problems.

In 1999, a group of scientists from the National University of Singapore, headed by Dr. Zhiyuan Gong, was tasked with obtaining an indicator fish: it had to change color in the presence of toxic compounds in the water. For this purpose, geneticists used the green gene of the jellyfish Aequorea victoria, which they inserted into the DNA of the zebrafish. The fry that appeared as a result of this manipulation began to glow with fluorescent light. The discovery was patented, and research continued.

At one of the scientific conferences, scientists showed the audience photographs of glowing fish, which were very interested in a representative of a company that sells aquarium fish. After that, an order was made to create fish with another color option. To do this, the gene of a coral from the genus Discosoma was inserted into the DNA of the zebrafish, so the fish got a reddish color. If a glofish fish receives the genes of a jellyfish and a coral at the same time, then its glow turns yellow. 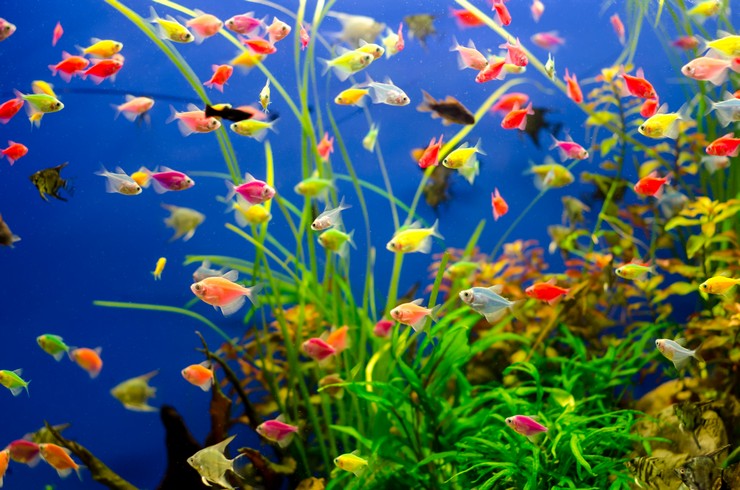 Further experimentation led to the creation of purple and blue glofish fish. Various combinations of genes from jellyfish and sea corals were used for such experiments.

Danio rerio (Danio rerio) were the first fish to be introduced with genes responsible for the synthesis of fluorescent proteins. Zebrafish, in whose DNA the GFP jellyfish gene was inserted, are green, and if the coral gene is RFP, then the fish turns red. When both genes are used together, glofish fish turn yellow. In ultraviolet light, due to the presence of these specific foreign proteins, zebrafish glow brightly. 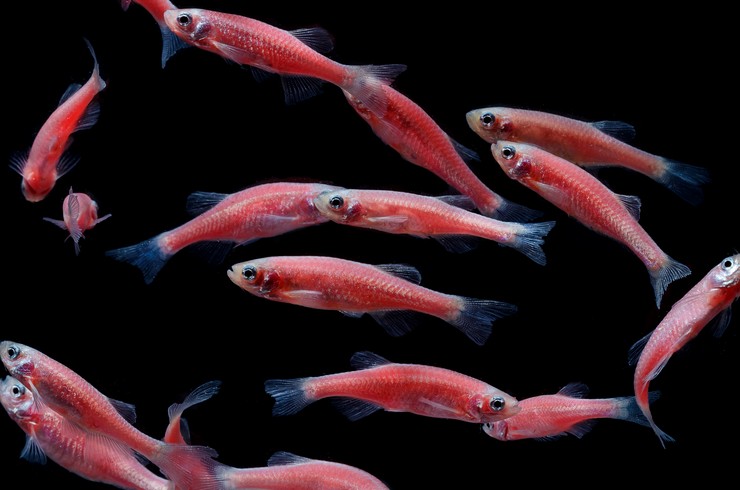 Gymnocorymbus ternetzi became the next transgenic species of glofish. These fish are very popular, slightly aggressive, and are great for beginner aquarists. There are no differences in the external structure and content from ordinary fish in glofish. 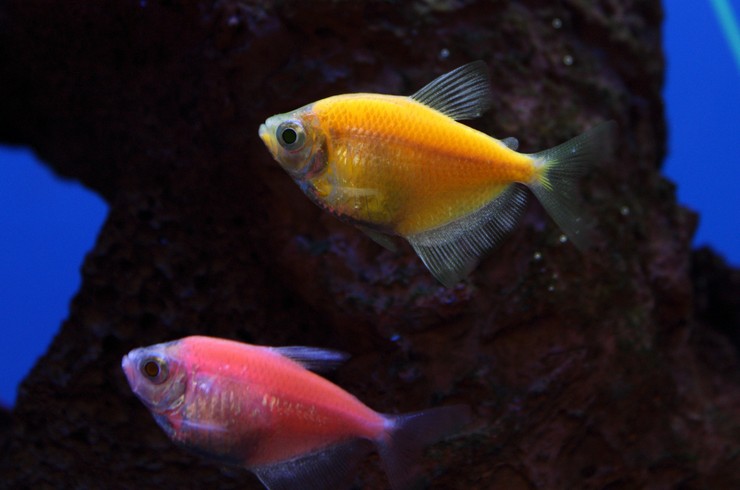 In 2013, orange and pink (“Moonrise Pink”) thorns appeared, and in 2014 red and blue colors were added to them. Forms with veil fins have also been created.

After the thorns of the glofish, the choice fell on mobile schooling fish – Sumatran barbs. They are large in size and look very impressive in an aquarium. First, a green shape was obtained, then a red one. Caring for glofish fish does not differ at all from the maintenance of ordinary barbs. 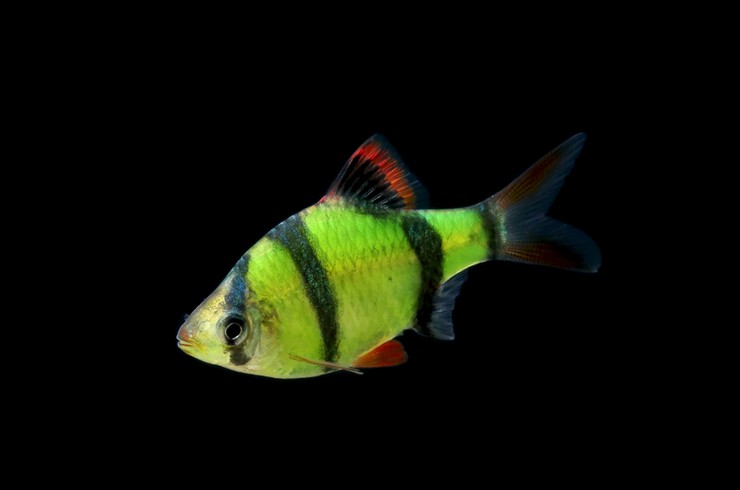 The genetically modified labeo glofish is available in two colors: purple and orange. It is difficult to say why the choice fell on this particular fish because it is not distinguished by exceptional peacefulness, it is territorial, and is not very suitable for novice aquarists. But, nevertheless, the labeo glofish turned out to be very interesting, this species also has red eyes, like albinos. 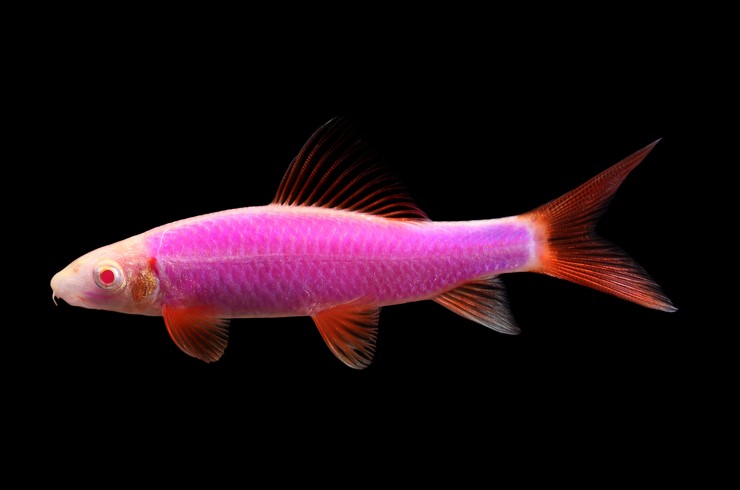