This reptile is also called “Hemitheconyx Caudicinctus”. One of the genera of geckos with fat deposition on the tail.

This species is widespread in West Africa (Senegal, Togo, Nigeria, Cameroon), reaching 22 cm in length. Colored in contrast, with transverse dark wide stripes, it ranks second in popularity among gecko fans, second only to Spotted Eublefar. Fat-Tailed Geckos, bred in captivity or admitted at a young age, capable of adaptation, are just as unpretentious. 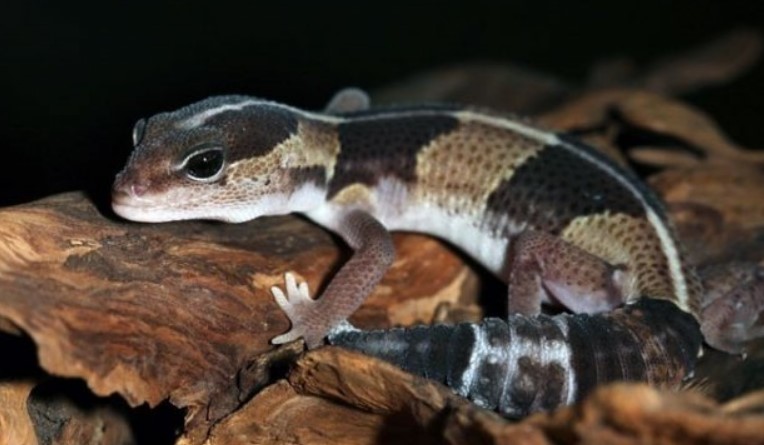 Up to 20-22 cm – body length with a tail. In general, this is a rather cute and charming creature with big eyes. Body-color is variable, but usually, 2-3 colors are always present. Usually, these are alternating spots of light orange and dark brown, as well as yellow stripes. The belly is white, or light pink. In some cases, along the entire back, a white stripe extends to the very tail. Frightened by something, these lizards begin to snort very characteristically and try to hide at the same time. If you grab their tail, they will throw it off. The tail will grow back but will be different from the previous one. 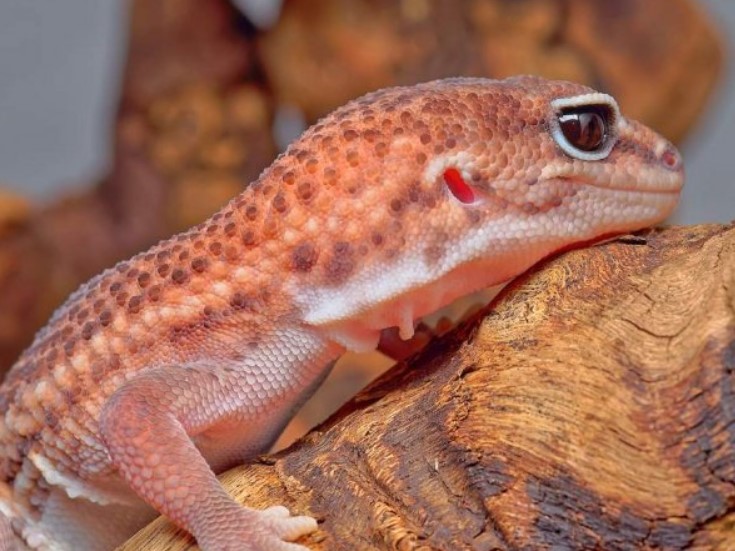 The species is widespread in West Africa, inhabits Cameroon, Togo, Mali, Nigeria, Senegal, Ghana, Liberia, Burkina Faso. On such a vast habitat, it forms relatively dense populations, and in some places, it is a background species. Leads a twilight-nocturnal lifestyle. Habitats are confined to dry and rocky areas on the slopes and plains, in hilly areas, thin forests, and in the foothills. In many places, it is common and well known to the locals. The species is not included in the CITES application, since its numbers are quite stable and in many places do not need additional protective measures. 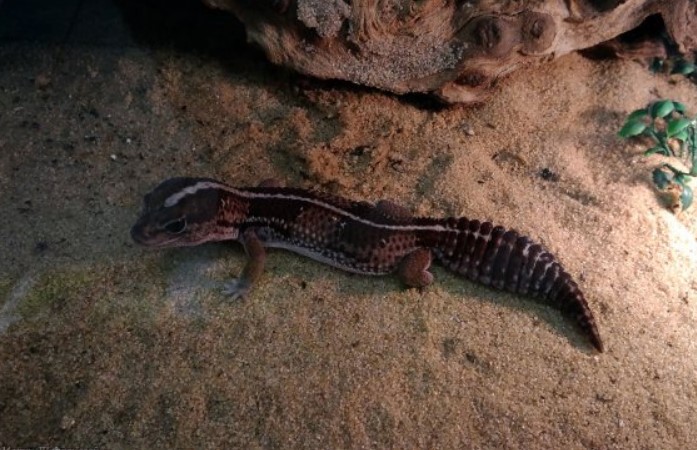 Geckos become sexually mature at 2-3 years of age, reaching the size of an adult. Oviparous species. After mating, after 45-55 days, females lay eggs, burying them in the ground of brood burrows. The number of eggs in a clutch is 1-2 pieces. After 45-60 days, babies hatch from the eggs, which begin to feed after the assimilation of the yolk reserve. Mating of Fat-Tailed Geckos occurs from January to May.

During one season, the female lays 3-6 clutches, but cases of 8 fertilized clutches from one female have been noted. For Geckos that have undergone long-term adaptation, have lived in captivity for several years, or were born and raised (especially those who have changed more than one generation) in terrarium conditions, a shift in the timing of wintering and subsequent mating is possible: wintering in September – mating from October to January, wintering in January – mating with February to June, etc.
Life expectancy up to 20 years. 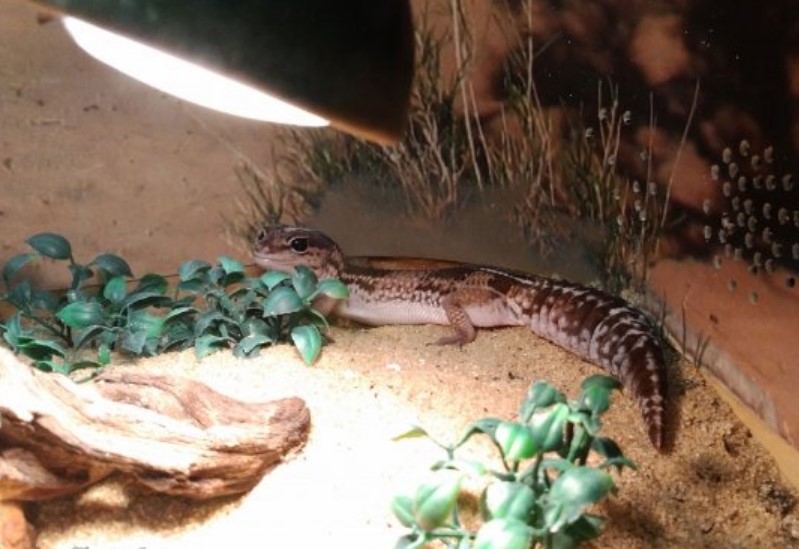 The content is not particularly difficult. Depending on how many Fat-Tailed Geckos you plan to place, start with a 10 or 20-liter terrarium. In a 20-liter, one male and up to five females can be accommodated without interference. The volume of the terrarium should be horizontal; containers with a large bottom area are preferred. You should never house two or more males in the same terrarium. These are territorial animals and if two or more males meet, bloody clarifications “who is the boss” will become a terrible reality. It is better to use coconut fiber in combination with sand as a substrate. For six individuals, two or more hiding places should be provided in the terrarium. Each shelter must be capable of accommodating reptiles. Shelters can be created using both natural materials (driftwood, stones, etc.), and artificial caves and grottoes purchased at the store.

f due to certain circumstances, in different places of the terrarium, there is some difference in temperature, then the shelters must be installed in the warmest and coldest places. Since moisture is of great importance to this species, a moisture source should be provided in every shelter. It is optimal if it is wet moss. Such a shelter will help Geckos molt, and will also facilitate thermoregulation if the Geckos need it.

If your Fat-Tailed Geckos come from humid climates, they may be in the habit of swimming. And if you notice they have such a desire, then in the shelters it is necessary to leave shallow baths with clean water. Both live and artificial plants can be used to model the terrarium interior. For illumination, it is better to use sources with radiation closer to the UV zone. The optimum daytime temperature is 25-30 ° С, at night – 20-23 ° С.

If heating is necessary, it is better to use a special thermal reptile mat, thermal cord, or heating stone. Air humidity inside the terrarium should fluctuate between 40-50%. The mold must be controlled and prevented, especially in areas with wet moss. 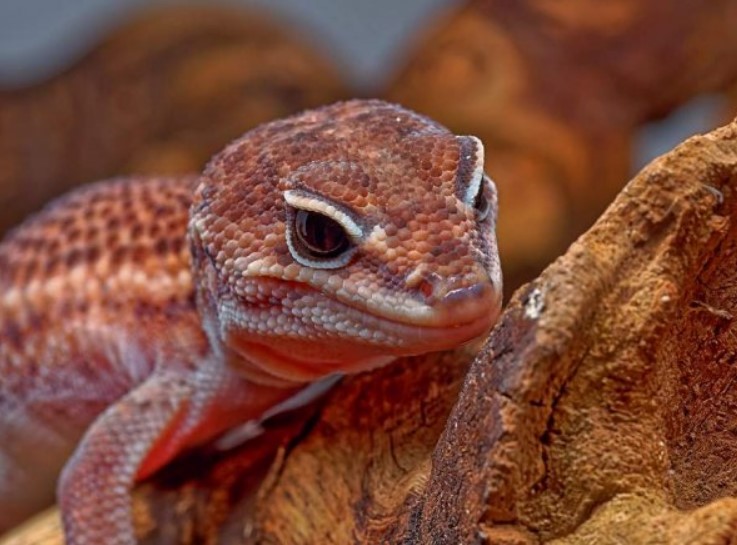 Fat-Tailed Geckos are insectivorous; they willingly eat cockroaches, crickets, and do not disdain mealworms. They will not give up newborn mice either. To avoid swallowing sand along with the food (this can lead to constipation), you need to feed either from tweezers or from a specialized feeder. For good nutrition, it is also necessary to use mineral and vitamin supplements, especially when feeding juveniles.

Geckos are fed from once a day (at night) to three times a week, each time giving as much food as the animals can eat at a time. If in the morning, you find the remains of food in the terrarium, they need to be removed.