The genus of scalar (Pterophyllum) currently includes only three species and, perhaps, the most spectacular of them is the Altum scalar, or high-bodied. The span of the fins of these fish can reach 40 cm, but despite their size, Altums swim gracefully and gracefully.

The high-bodied scalar or the altum scalar (Pterophyllum altum) is a freshwater tropical fish from the Tsichlov family. Along with the common scalar and Leopold’s scalar, it is a triad of the genus Pterophyllum. The species was described by French zoologist Jacques Pellegrin in 1903. “Altum” in translation from Greek means “high”, which reflects the main difference of this species from other scalars – a strongly elongated body. With fins, the size of some individuals can reach 40 cm.

Altum scalars can serve as a decoration for any large aquarium. Their movements are graceful and light. The first individuals to enter hobby aquariums were caught in the wild. The cost of the fish was quite high. Even in our time, despite the success in breeding these magnificent fish, you can find “savages” on sale. 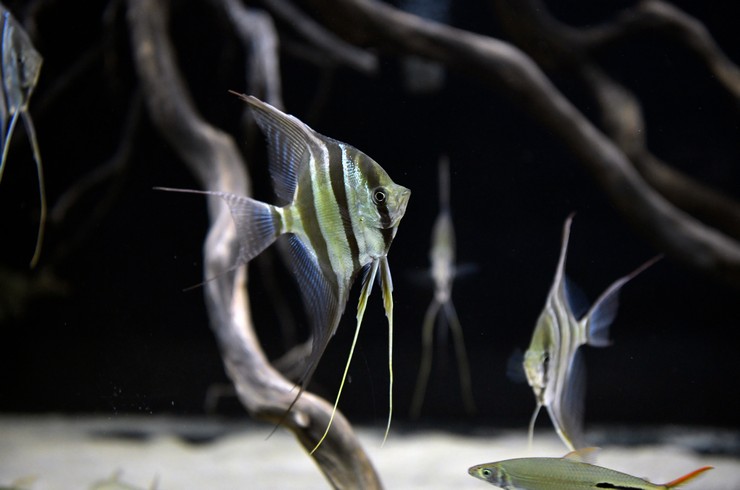 Altum scalars are similar to common scalars, which is sometimes confusing. It is especially difficult to distinguish altums from some of the scalar species living in the Rio Negro River basin, which have an elongated body and a slightly protruding muzzle. Unfortunately, this plays into the hands of dishonest merchants who pass them off as real Altums and sell this species at a price ten times more expensive.

Altums are very hardy fish, with the correct technology of transfer to the aquarium, even among natural individuals, losses are minimal. Most of the time the fish spend in the middle layers of the water, but the food is easily taken from both the surface and the bottom. 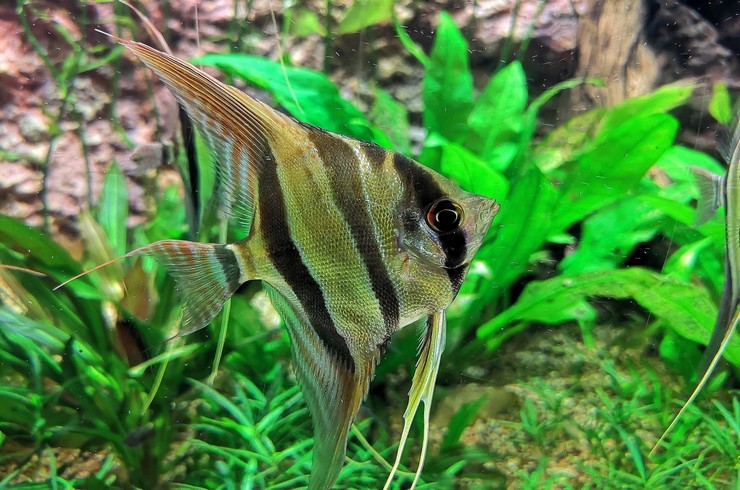 Four dark, almost black stripes are perfectly visible on the body of the Altums. Their intensity depends on the mood of the fish and the environment. During stress, additional paler streaks may appear between them. If the altum angelfish is excited, then a dark spot appears behind the eye. This is observed in all members of the genus.

The boundaries of the natural habitat of altums are still not fully described. It can be argued for sure that the species lives throughout the entire space from the Orinoco and Rio Negro rivers to the Amazon. It is very likely that the ranges of altum and common scalar overlap, and the appearance of natural hybrids in this area is not even ruled out.

There are fish in reservoirs with black tropical water, and in light waters, but they prefer the former more. The water is soft and acidic here due to a large amount of rotting organic matter from the fall of tropical rainforests. They like moderate currents and oxygen-rich water.

Altum scalars live in small groups of 5-20 individuals. They prefer areas near the coast at depths of up to 3 meters with dense thickets of aquatic vegetation and snags, which serve as a natural shelter. 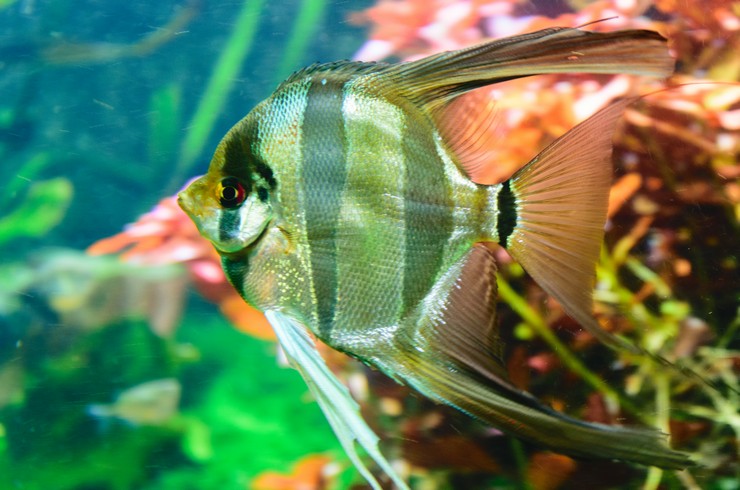 To keep the altum scalar you need an aquarium with a volume of at least 100 liters per pair. And with the content of a group – 2-3 times more. It is better to install it in a place where the fish will not experience unnecessary stress from extraneous sounds. This is especially true of “savages” who can respond to such stress by trying to jump out of the water. For the same reason, the aquarium must be equipped with a lid.

Altums, like discus, are often kept in so-called hygienic aquariums, that is, such containers in which there is no soil. This allows you to keep track of dirt and clean the bottom in time. In addition, in aquariums with soil, the following phenomenon can be observed: at night, when altums descend to the bottom for rest, they touch the soil with their long fins, and the pathogenic microflora that lives on its surface can damage the fins. If you still want to use a primer, it is best to stay on a thin layer (up to 10 cm) of quartz sand. Natural reservoirs often have such a substrate. If necessary, some of it can be easily removed, washed, and returned to the aquarium. 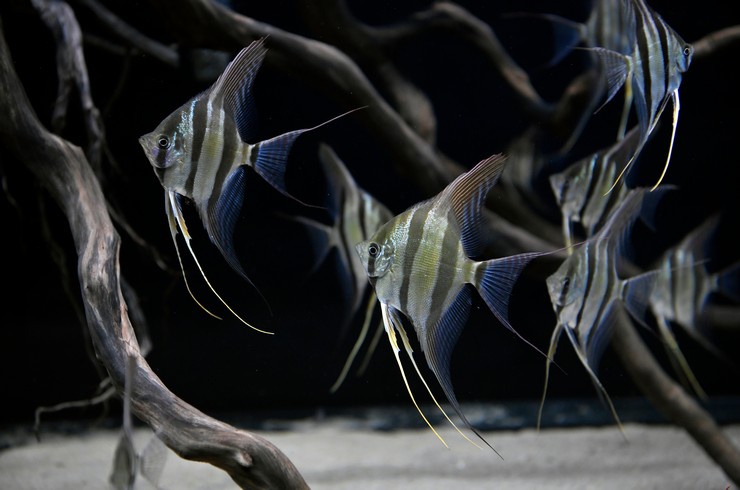 Natural driftwood, stones, and broadleaf living plants (for example, echinoderms) are usually used as decorations. The latter is also a great place to lay eggs.

Particular attention must be paid to high-quality filtration. It is best to install an efficient external filter. The current can be moderate, because, unlike discus, altums tolerate it well. For aeration, you need to install a compressor of suitable power. And for additional cleaning of the aquarium from pathogenic microbes, an ultraviolet sterilizer is often used. When keeping altums, you cannot do without a thermostat, because these tropical fish love water temperatures from 27 ° C.

To maintain high water quality, weekly changes of up to 20% of the aquarium volume are required.

Altum scalars are distinguished by their peaceful disposition but do not forget that they are still cichlids, and this species also has the rudiments of hunting instincts. The ideal option would be a species aquarium in which the fish can demonstrate all their beauty. 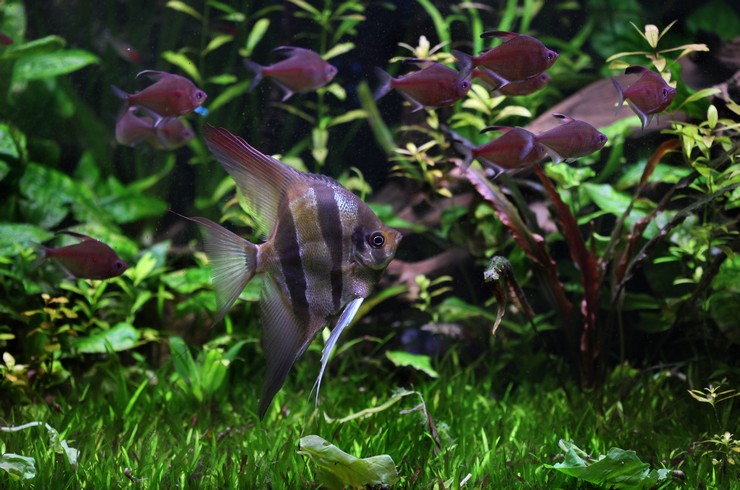 You should not add fish to altums, the size of which is an adult state does not exceed 4 cm (micro-assemblies, ototsinkluses, etc.). Sooner or later, scalars may start hunting them. But when trying to swallow prey, it easily gets stuck in the mouth of the fish, which can cause their death.

Of course, altums with large predatory fish cannot be kept, which can not only bite their gorgeous fins but also beat the scalar to death.

The natural diet of altums is quite varied. It includes insects, worms, crustaceans, and another fish fry. For this reason, many aquarists prefer to feed their fish live or frozen foods such as bloodworms, brine shrimp, tubifex. Such food cannot fully meet the nutritional needs of altums, and, moreover, pose a potential threat of contamination of the aquarium. It is strongly not recommended to feed high-bodied scalars with minced meat of warm-blooded animals (for example, beef), fish do not have specific enzymes for digesting this type of meat.

The ideal solution for feeding altums at home will be high-quality dry food. They are fully balanced, contain a complex of vitamins and prebiotics, are well-absorbed, and reduce the amount of fish waste, which allows you to keep the water in the aquarium clean.

Altum scalars do not take food that has fallen to the bottom, so food in the form of flakes or chips, which are kept on the surface for a long time, are best suited for them, after which they slowly sink: