The American Bulldog is a dog breed with an athletic build, extraordinary strength, endurance, and difficult temperament. American Bulldogs are actively used in various fields, they can be both service dogs and just companions, family defenders. 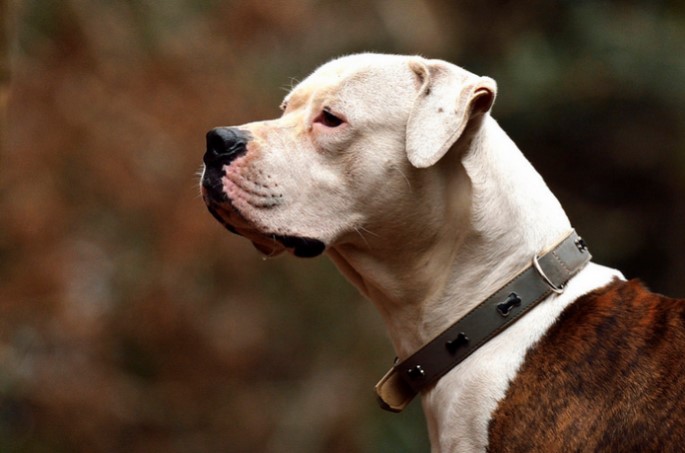 American Bulldogs belong to the Molos group, which means that their distant ancestors are ancient Greek fighting dogs. They were bred in England specifically for fighting with bulls. For the first time, Bulldogs are mentioned in the chronicles of the 16th century, which describe a large dangerous beast, superior in strength to an armed man. These dogs have always been distinguished by a strong nervous system and a corresponding type of constitution, but their fearlessness and tenacity were especially appreciated.

In the early 18th century, Old English Bulldogs were brought to America by colonists, mainly in the southern state of Georgia. Dogs helped settlers to settle in new conditions, guarded housing and property, protected from animals.

There were no attempts to register the breed in the American Kennel Club since the English Bulldog was already officially recognized there. In addition, dogs from the south have long been considered quite common and unremarkable. In the 70s of the twentieth century, the breed began to enjoy popularity, several dog handlers were engaged in its breeding and formation. They registered litters and kept records, the number of nurseries grew. The American Bulldog was officially recognized in 1999, at the same time the standard was approved.

Initially, the American Bulldog was known as a southern farm dog that grazed herds and hunted wild boars. It was an animal with a square head and a muscular, athletic body. The recognized type of American Bulldog was changed by two people: Alan Scott and John D. Johnson. These young people appreciated the qualities of the working dog breed and took upon themselves the labor of its official recognition as a purebred animal.

They first filed a petition with the ARF Animal Research Center in the United States. This was the first step towards the formation of the breed. At the beginning of the journey, Scott and Johnson faced the first problem – for the subsequent purebred breeding, they had an insufficient genetic fund. Breeders saw the way out in outcrossing. So, the Scott American Bulldog type was the result of crossing a dog with an American Pit Bull Terrier. Dogs like Scott still have similar traits to Pit Bulls:

There is also a definite tendency towards a long muzzle.

John used a different strategy. Therefore, an American Bulldog like Johnson is a cross between a dog with Mastiffs and English Bulldogs. Johnson’s animals are still very similar to the English Bulldogs. They are considered too large to perform any serious work, although there are still certain standards for dogs, and the animal can be attracted to work for a certain time. Johnson’s American Bulldogs differ from Scott’s dogs in mobility. Although such fame is largely due to the breeders keeping pets overweight. 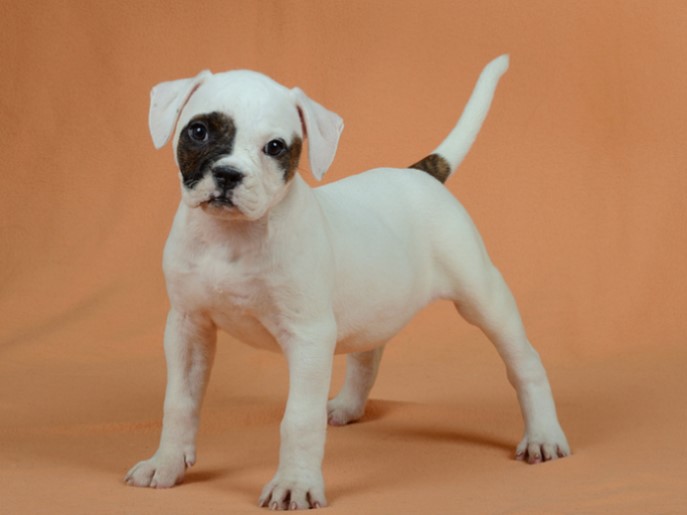 The head is voluminous, flat from above. The muzzle is wide and square. The nostrils are wide open, the lobe is dark. The lips are pigmented, but small light blotches are allowed. The lower jaw is well defined, a dense undershot is preferable. The brushes are well developed and muscular. The ears are set high, of medium size, drooping. The neck is strong and muscular to the shoulders. The chest is deep. The back is broad and moderately short. The tail is strong, of medium length, tapering towards the end, slightly curved. In an excited state, it is thrown behind the back, in a relaxed state, it is lowered. Paws are strong, in proportion to the body. The anterior ones are set moderately wide, the posterior ones are slightly closer, parallel. The gait is free, the movements are well balanced. The coat is soft and short. The main color in the color is white, it can have a drawing of any color, more often: 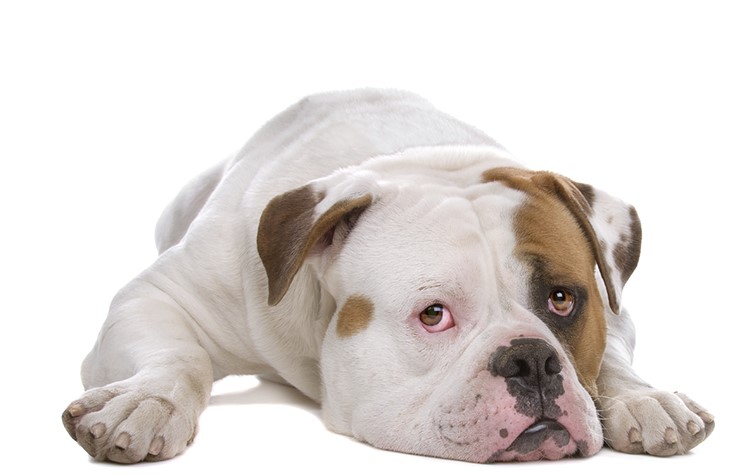 The character of the American Bulldog cannot be called simple. These dogs are cheerful, friendly, good-natured, sociable, and love the company of the owner, but at the same time, they are stubborn, dominant, sometimes capricious, and overly independent. American Bulldogs are distrustful of all outsiders, but they belong to their family without a trace.

They do not always get along with other animals in the house. If the pets grew up together, then you can hope that they will become friends. But if someone new comes into the house where an adult Bulldog lives, Bulldog can arrange a real hunt for him. For the most part, these dogs are very good with children, love to play with them, and are unusually patient in all children’s pranks. 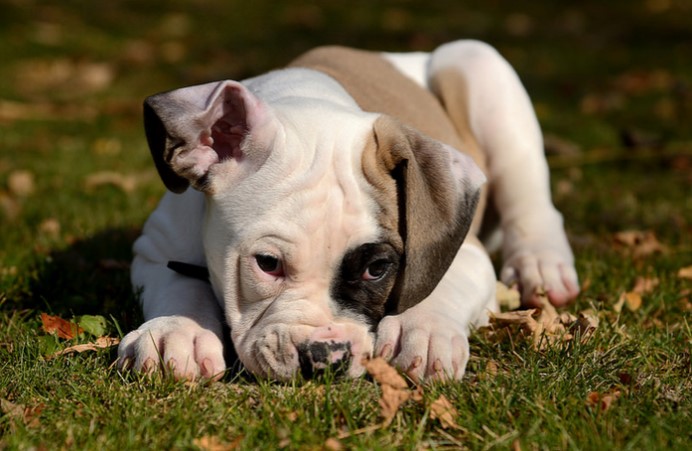 The American Bulldog is best suited for keeping in a private home with a large plot, but not suitable for year-round outdoor living in cold climates. He can also live in a city apartment if he is provided with the necessary physical activity.

The American Bulldog does not require much maintenance. The dog is bathed no more than 2 times a year. Wool is periodically combed out with a special brush for short-haired breeds, a little more often during molting. The eyes and ears are wiped as they become dirty, using special cleansing lotions. If the claws do not grind on their own, they must be trimmed.

American Bulldogs are usually unpretentious to food, they can eat natural or dry food. The main thing is that the diet is strict in accordance with the age and physical activity of the dog. Some owners practice combined nutrition: dry food with natural supplements.

American Bulldogs are tough and hardy dogs but genetically predisposed to hip and elbow dysplasia, volvulus, allergies, and various skin conditions (such as dermatitis and eczema) that can be caused by ectoparasites or be immune in nature. Unilateral or bilateral deafness occurs.

The average life expectancy is 13-14 years.