The progenitor of the American Eskimo dog is the German Spitz. This dog came to America in 1913 and immediately gained great popularity among the population. But not everyone could afford to have such a pet – Spitz was very expensive. But, despite such popular love, this breed was recognized by the American Kennel Club only in 1995. The American Eskimo dogs are divided into three varieties: toy (length at the withers from 23 to 30 cm and weighing 2.4-4.5 kg), miniature (30-38 cm, weight 4.5 – 9 kg.), and standard Spitz (38-48 cm, weight 9-16 kg). Despite the differences in size, all Spitzes are united by a kind and playful disposition and an agreeable character (of course, subject to proper upbringing). 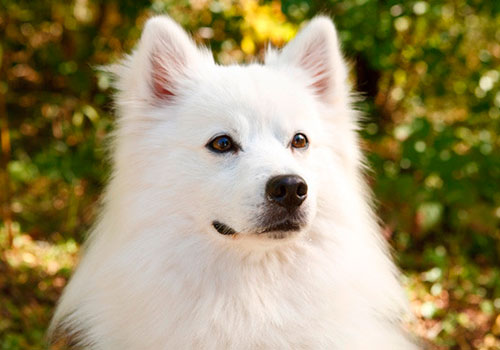 The American Eskimo is a robustly built dog with thick, soft, long snow-white, pale cream or light brown hair, forming a lush collar on the chest and neck. He has small, erect ears, rounded at the ends, and a fluffy tail gracefully draped over his back. Outwardly, the American Eskimo dogs resemble sly chanterelles. If you get yourself this charming indoor dog, be sure – he will be infinitely in love with you and will do everything to make you also crazy about him. You can easily teach him how to perform various tricks: the American Eskimo is very talented and easy to train and can participate in agility and other dog competitions. It is not for nothing that these dodgers have been the favorites of circus trainers for a long time. Try to arrange active walks and regular exercise for your pet, otherwise, it will get fat and become lazy. But remember that Pomeranians are quite noisy dogs, so educate your pet and do not let him show off his sonorous voice too often, especially in front of strangers. Unfortunately, this breed of dogs is prone to various diseases, especially often they have hip dysplasia, which can be either congenital or acquired as a result of improper nutrition, so carefully consider the diet of your pet. Also, blue-eyed Spitz often suffers from blindness. Despite their playful and kind disposition, dogs of this breed are fearful and wary of strangers. Try to make sure that your dog is not afraid of people, but at least does not pay attention to them. The early socialization of your pet and its calm nature is a guarantee of admission to breeding. Do not forget to brush your snow-white beauty’s fur twice a week and protect it from fleas that can cause dermatitis in him. A fun fact about this interesting breed is that the American Eskimo dog is very fond of frolicking in the snow, so in winter, often arrange “snow” walks for him, and he will be infinitely happy.