The Australian Wildlife Rescue Center has once again proved that opposites attract. Recently, at about the same time, a small cross-eyed wombat and a baby kangaroo, well, very cute, got there. 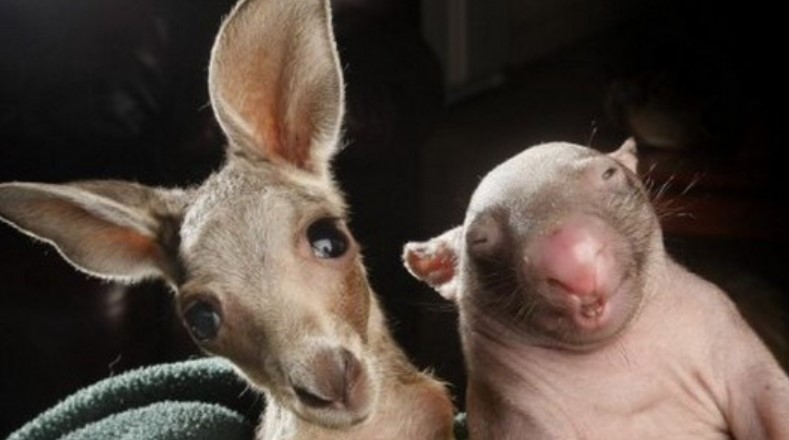 In order to make it easier to care for the cubs, they were housed in one enclosure. No one would have thought that animals could make friends.

Kangaroo babies usually spend eight months in their mom’s bag. But the kid named Anzas somehow fell out of the bag a couple of months before the due time. At five months old, he would not have been able to adapt to the world around him, and therefore he was sent to the center.

So that Anzas did not get bored so much, he was lodged with the wombat Peggy, so that the animals could sleep together and not succumb to sadness. Peggy was glad too – he no longer felt lonely.

Most likely, it was the different characters that helped the animals to make friends. Peggy is a very violent and arrogant kid, and Anzas is calm and affectionate.

Now animals are similar to each other, but over time they will become more and more different from each other. Whether their friendship will continue is unknown.

The weight of animals will be approximately the same – about thirty kilograms. But Peggy will be rounder, vaguely like a pig, and Anzas will stretch higher.

It was only lucky that they could not harm each other, since both feeds on plant foods. Who knows, maybe the animals will continue to spend time in each other’s company, walking together and eating grass and flowers.