You can often find amazing fish of very ancient origin in aquariums. It is hard to imagine, but relatives of the arrows found dinosaurs on Earth. In eastern countries, this fish is a symbol of wealth and prosperity, and the cost of individual specimens can reach hundreds of thousands of dollars.

Most arowana’s are large fish (they can be over 100 cm in length), so adults can only be kept in large aquariums. Despite their impressive size, in nature, arowana’s are able to jump out of the water at a distance of up to 3 m.

Arowana is an intelligent pet, they get used to the owner well, they often allow themselves to be stroked and fed from their hands.

According to Feng Shui teachings, Arowana brings good luck in business, prosperity, and wealth. For this, in offices or shops, aquariums with fish are installed in the money corner. On sale you can find numerous crafts in the form of Arowana, they are considered powerful talismans. 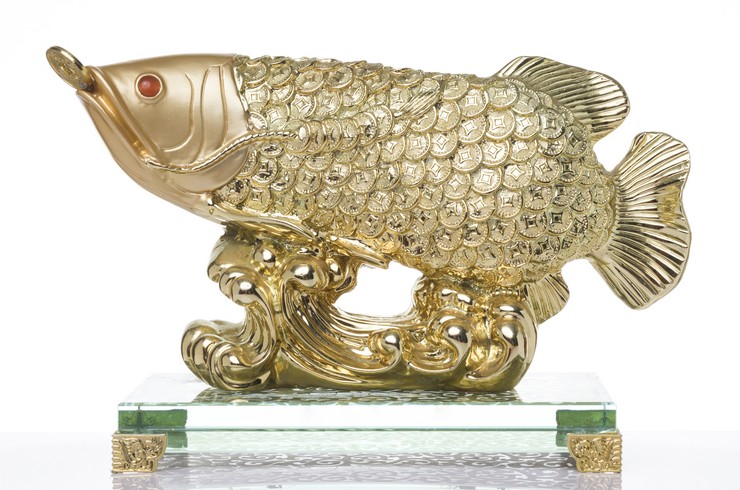 For its unusual body shape, the fish is often called “dragon fish”. Arowanas are frequent pets in public aquariums and zoos.

Arowanas have an elongated body compressed from the sides. Natural individuals can grow up to 120 cm, in aquariums the body length usually does not exceed 60 cm. The body is covered with large, clearly distinguishable scales. Bone plates cover the head. The mouth is usually upper, very wide. The lower jaw has a pair of whiskers pointing forward. These senses are able to pick up even the smallest vibrations of water and help the fish to hunt. 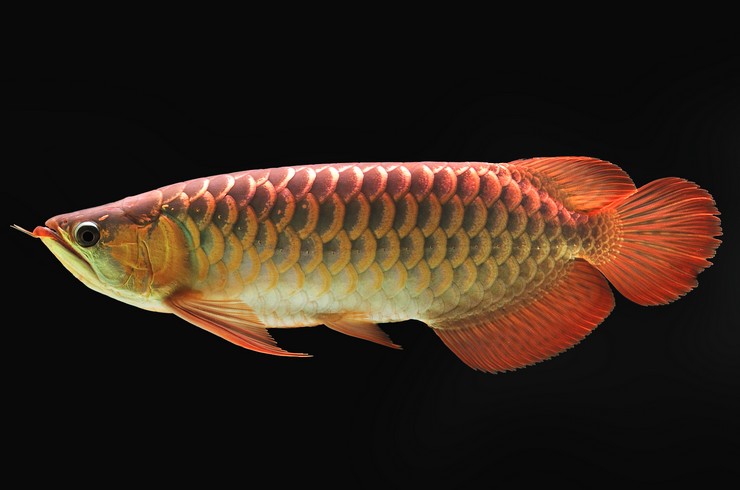 For a significant part of the time, Arowana prefers to stay in densely overgrown reservoirs, in which oxygen deficiency is not uncommon. Therefore, they have developed adaptations for additional breathing. Their swim bladder is enveloped in a dense network of blood vessels and allows it to function as a lung, dissolving oxygen in the blood. In some species, a special supraciliary organ has formed, which allows it to capture atmospheric air.

Representatives of the family can be found on almost all continents: in South America, Africa, Australia, and Eurasia (Southeast Asia). This is explained by the fact that the fish are of ancient origin. Arowana’s ancestors lived in the Jurassic period on the supercontinent of Gondwana, which later split into the above parts of the world. Currently, Arowana lives in the equatorial and tropical climatic zones. They prefer stagnant bodies of water.

The Asian Arowana (Scleropages formosus) lives in the Mekong River basin (Vietnam and Cambodia), western Thailand, Sumatra, and Borneo. Unfortunately, the natural population has practically disappeared. Fish can be found in lakes and swamps.

Body size can reach 90 cm (but rarely exceed 60 cm in an aquarium). There are several color morphs, the most popular of which is Super Red Arowana. A very popular fish in Asia, but expensive. Each such fish is implanted into the body with a microchip, which contains information about the pedigree, the region of cultivation, and the data of the breeder. Its owner receives a certificate of ownership. 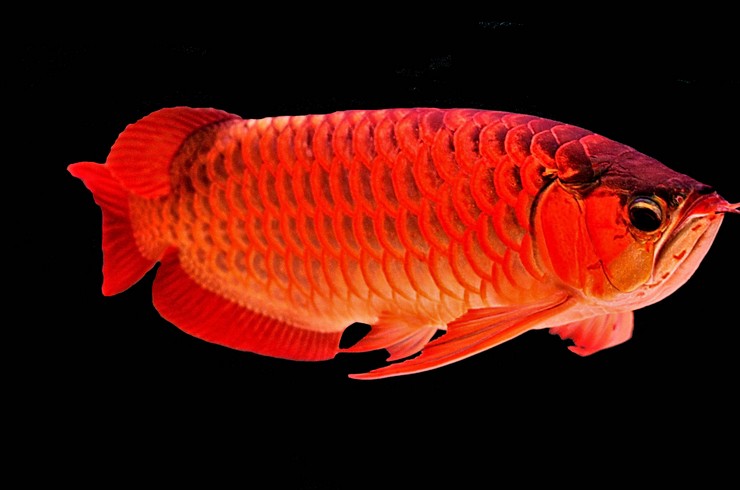 It is a color variation of Asian Arowana. Young individuals are dimly colored, but in adults, the scales shine like an ingot of gold. They live in West Malaysia. Black Arowana (Osteoglossum Ferreira) lives in the basins of the Rio Negro and Orinoco rivers (Brazil and Colombia). Prefers shallow backwaters and coastal areas of rivers. Most of the time it spends swimming near the surface in search of prey. The first thing you need to pay attention to when maintaining an Arowana is the volume of the aquarium. Young individuals up to 20 cm long will be enough and 250-300 liters. But for adults, a volume of 800-1000 liters is recommended. The size of the aquarium should be such that the fish can turn around without problems. The presence of an opaque lid is necessary because Arowana’s can instinctively try to grab an insect, jumping out of the aquarium. 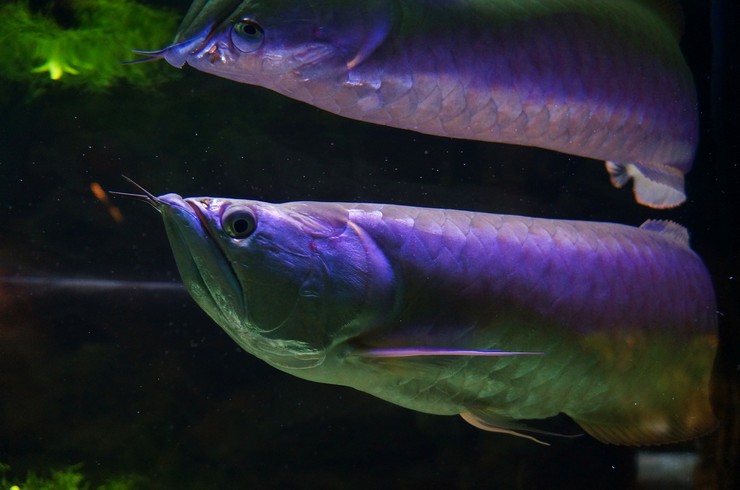 The aquarium is most often designed in the biotope style. Sand or small pebbles are taken as soil. Natural stones and driftwood are installed. From living plants, the giant Vallisneria has proven itself well, only the plant must be surrounded by stones so that the arowanas do not accidentally pull it out.

The next important point is an effective filtration and aeration system. This large fish produces a large amount of waste that needs to be removed from the system, so cleaning the soil and changing one-fourth of the volume of the aquarium should be done weekly. 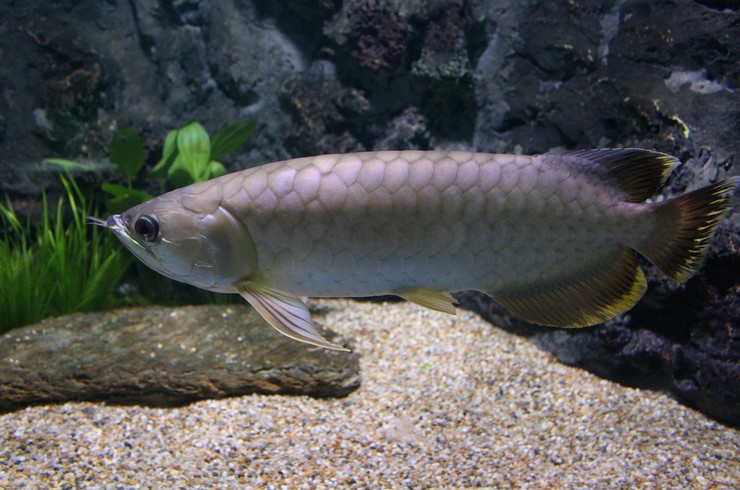 The lighting should not be bright. Ideally, you need lamps that will smoothly turn on the lighting so that the fish are not frightened.

Under natural conditions, Arowana has a pronounced hierarchy: the dominant individual chooses a certain area for itself and attacks any relative that dares to swim very close. For this reason, adults are kept mostly alone to avoid possible conflicts between individuals.

Representatives of other types of arowanas are calm. The fish will not get along with only small species, because sooner or later it will swallow any fish that can fit in its mouth. It is worth excluding fish that live in the upper layers of the water, so as not to create competition for the Arowana. 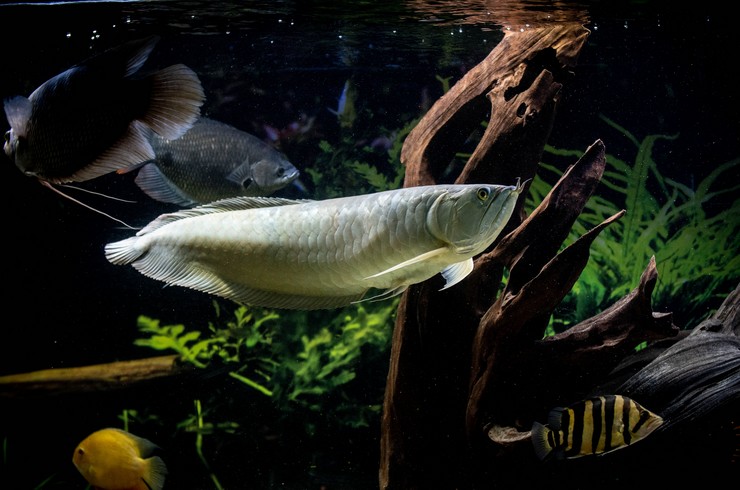