The most famous aquarium fish, the guppy, has a lesser-known “younger brother” – the dwarf guppy, or Endler’s guppy. Despite the fact that this species became available to amateurs only recently, the miniature size, bright color, and unpretentiousness made the fish popular among aquarists.

Endler’s guppy, or dwarf guppy (Poecilia winger), is the closest relative of the well-known viviparous fish. And although the species was first described back in 1937, the fish spread widely in the aquarium culture only decades later, after their “second discovery” by John Endler, after whom the species was named.

The main difference between Endler’s guppy and its eminent relative is size. The fish is miniature, males barely exceed two centimeters. But at the same time, they have a variegated color, are unpretentious in content, and easily reproduce due to living birth.

At the moment, a large number of forms with original colors have already been received.

Endler’s guppies have a small, slightly elongated body. Fish are characterized by pronounced sexual dimorphism. Males are smaller than females: males usually do not exceed 2.5 cm, females – 3.5 cm. Males are distinguished by bright colors: yellow, purple, red, orange, green spots are randomly distributed throughout the body. There are no two individuals with the same pattern. On the side is a bean-shaped dark spot, the color intensity of which varies depending on the surrounding conditions. It is also the first to become noticeable in fry when the bright color has not yet appeared. 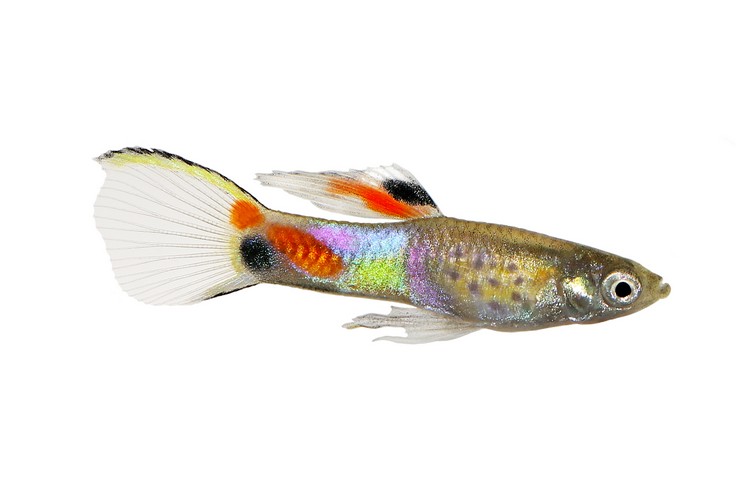 The body of females is uniformly colored in gold or silver with a metallic sheen. At the moment, several breeding farms have been obtained that differ in color: snakeskin, tiger, cobra, and others.

Endler’s guppies were discovered and described by Franklin F. Bond in 1937. The first specimens were caught by the researcher in Lake Laguna de Patos (Venezuela). This unusual body of water was once part of the ocean, but isolation by a narrow strip of land and regular rains contributed to the fact that the water in the lake became fresh. However, the fish did not gain popularity at that time. Moreover, it was considered extinct for a long time, until the research expedition of Dr. John Endler discovered this species again. So the “rebirth” of the fish took place, but this time the fish was infinitely loved by aquarists and spread widely throughout the world. 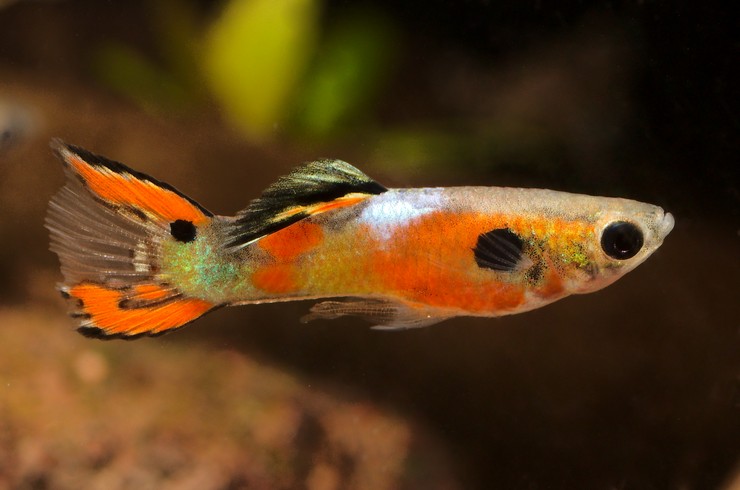 Endler’s guppies are endemic to the coastal Venezuelan lagoons, at the moment their number has greatly decreased, which is associated with the pollution of natural habitats. The species is recognized as endangered in nature but thrives in aquariums.

It is best to keep the Endler guppy in small flocks of 6 or more individuals. In this case, it is necessary to observe the sex ratio: there should be two or three females per male. It is best if the volume of the aquarium is 40 liters or more. Endler’s guppies look most impressive in dense thickets of aquatic plants. Fish are very mobile, males constantly look after females. For decorative purposes, only males can be kept in the aquarium, because they do not conflict with each other. But females, with a lack of territory, are able to bully neighbors. The container with the fish must be covered with a lid because Endler’s guppies can jump out. Any soil suitable for living plants can be used, for example, coarse river sand or small pebbles. It is necessary to install a filter in the aquarium, but make sure that the current is not too strong, because Endler’s guppies are lake dwellers, which means they do not cope well with strong water flow. Aeration of the water is also necessary. The lighting is dim, in bright light, the fish turn pale. This can be achieved with the help of plants floating on the surface of the water. 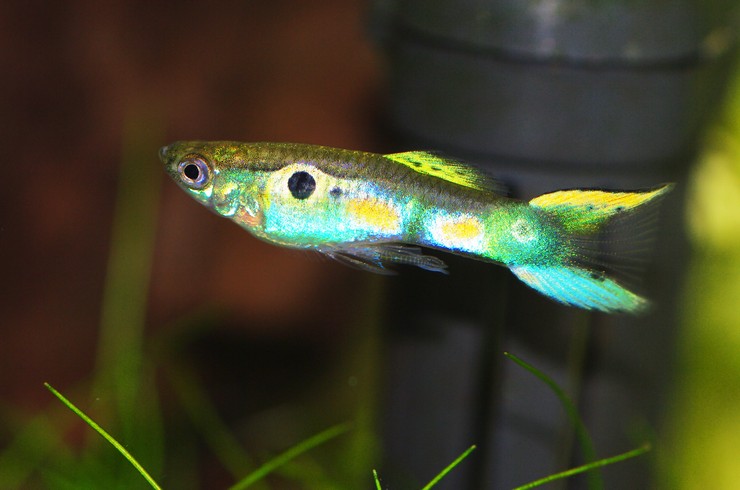 It should be noted that keeping the Endler guppy at temperatures of about 30 ° C leads to an acceleration of metabolism and growth rates, but reduces the life span of fish. Change 25-30% of water weekly. The fish can tolerate a slight increase in salinity.

Endler’s guppies get along well with living plants, so you can choose any popular species: elodea, ludwigia, hygrophila, Cabomba, etc.

Endler’s Guppy is a peaceful fish that gets along well with any calm species of small fish. Good neighbors will be neons, rasbora, zebrafish, cardinals, corridors. Do not plant with active barbs, they can nibble fins with dwarf guppies. Also, do not keep them with ordinary guppies (Poecilia reticulata), because the species are able to interbreed with each other to form hybrids, which will negatively affect the purity of the breed. The fish gets along well with shrimps, such as cherries.

The natural diet of Endler’s guppy includes various foods: insect larvae, and small worms, and algae. When keeping in an aquarium, it is important to provide a varied diet for dwarf guppies. To do this, you must use high-quality dry food, they are safe, balanced, and contain a variety of functional additives, for example, to enhance the color.

When choosing food, it should be borne in mind that the fish has a small mouth and prefer to stay in the upper and middle layers of the aquarium most of the time. Also, for the proper functioning of the gastrointestinal tract, the menu must-have herbal ingredients. Tetra has developed the Tetra Micro food series of micro food especially for feeding miniature fish. Endler’s guppies are perfect for Tetra Micro Crisps – two types of crisp food: the red ones are made from animal products and contain carotenoids to enhance their natural color, while the green ones are made from plant ingredients to support the health and vitality of fish. 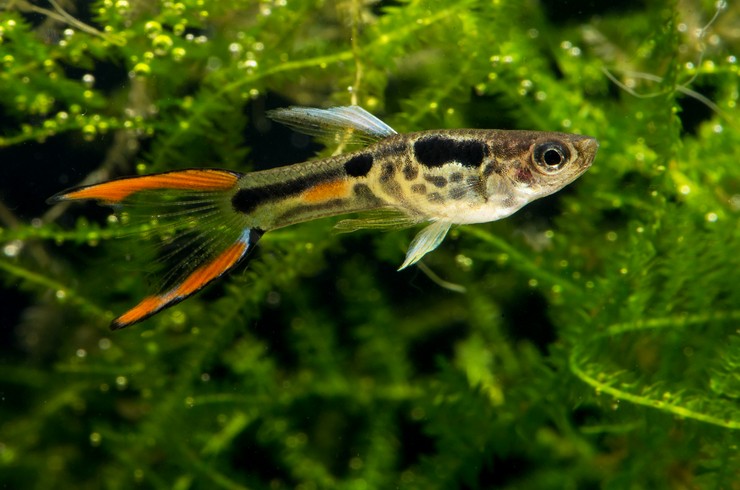 The fish will also like TetraPro Algae food – a complete food in the form of chips, which are made using a gentle low-temperature technology, which allows you to preserve more nutrients and vitamins in the raw materials. The spirulina algae concentrate, located in the center of the chips, fully satisfies the fish’s need for plant foods.

Suitable for feeding and basic flake food for all types of ornamental fish with a high content of plant ingredients – Tetra Phyll.

You can pamper your pets with natural daphnia in Tetra FreshDelica Daphnia nourishing jelly. This will diversify the diet of your fish and make the feeding process even more fun.

Reproduction of Endler’s guppy does not cause any difficulties. It is enough to have at least one pair in a suitable aquarium, the fish will do the rest themselves. Sexual dimorphism in Endler’s guppy is well expressed, so you can easily pick up a male and a female. It is better to select breeders of the same breed to keep the line clean. 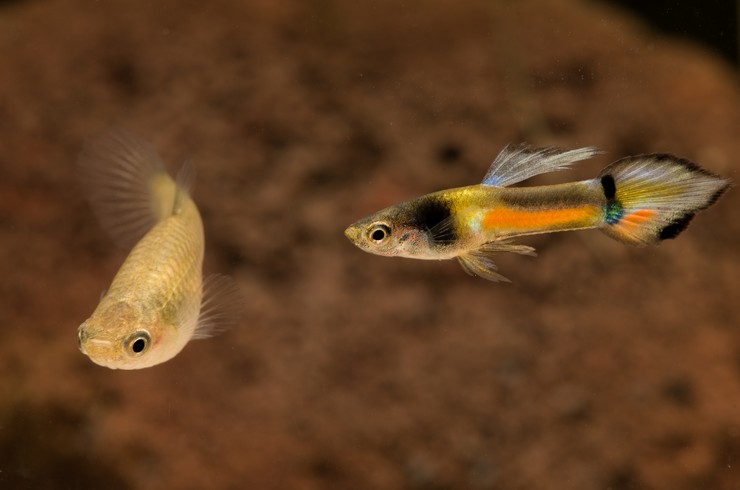 Endler’s guppies are viviparous fish. This means that the eggs are fertilized and develop in the body of the female, and a fully formed fry is born. For this type of reproduction, males have a special organ – gonopodia. It is a modified tube-like anal fin. With the help of it, the male introduces sexual products into the abdominal cavity of the female, where fertilization takes place. Interesting fact: the female is able to store the male’s milk for up to three months. Considering that new fry appears every 24 days, a female can produce up to three litters. Unlike ordinary guppies, the number of fries that are born is small – from 5 to 25.

Sexual maturity in fish occurs at about 2 months of age. Spawning takes place without problems in the general aquarium. Breeders very rarely eat their fry, but just in case it is better to plant them in a separate aquarium. Endler’s young guppies are relatively large and are capable of eating brine shrimp nauplii or high-quality dry food for fry (for example, TetraMin Baby) from birth. It is necessary to feed the fish at least 3 times a day, then they grow very quickly. Males acquire permanent coloration by 3-4 weeks of age.