Bright colorful crustaceans have always attracted the attention of aquarists. And if earlier amateurs could boast of only the most common cherry shrimps, now the range of species available for keeping has significantly expanded. In our article, we will talk about the content of babaulti – a small unpretentious shrimp native to India.

Babaulti shrimp (Caridina cf. babaulti) are freshwater crustaceans of the Atid family. Despite the fact that these shrimps were discovered and described more than a century ago, there is still no clarity in their taxonomy, therefore invertebrates are better known under the general commercial name “babaulti”. Shrimps are named in honor of the Indian explorer M. Babault, who discovered them during his long expedition (1914-1918).

Babaulti shrimp quickly won the hearts of hobbyists. First of all, this is due to the unpretentiousness of the content, in this matter, they are in no way inferior to even the popular “cherries”. Babaults reproduce very quickly, so even novice aquarists will not have problems with obtaining offspring.

Babaulti shrimp are true geniuses of disguise. They have one unique feature – crustaceans are able to change body color depending on the conditions of detention, feeding, or mood. Aquarists note that it is extremely difficult to see the hidden shrimp, and the actual number of shrimp in the aquarium usually differs significantly from that visible to the naked eye.

Babaulti is small shrimps, the size of an adult does not exceed 4 cm, females are larger than males. The color of these arthropods is unusually diverse: most often you can find green or brown individuals, but there are blue, red, and orange forms. Among the features of the appearance of babaulti shrimps, one can distinguish a strongly curved rostrum (an elongated front part of the shell) and a longitudinal line on the back.

It is worth noting that the color of babaulti shrimp depends not only on hereditary data but also on the feed and conditions of detention. 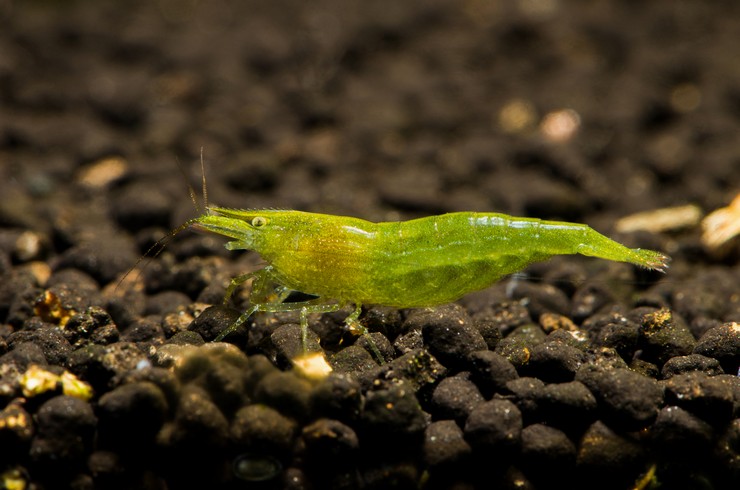 In nature, the babaulti shrimp lives in the reservoirs of India. Crustaceans prefer small ponds, small rivers, and lakes. You can meet them among the dense thickets of aquatic plants, where they hide, effectively disguising themselves as the environment.

It will not be difficult to create conditions in the aquarium that are comfortable for babaulti shrimp. They must be kept in groups. The optimal aquarium should have a volume of 10-30 liters. The number of shrimp is growing rapidly, this must be taken into account when choosing an aquarium.

It is desirable that a large number of aquatic plants be planted in the container, which serves as a natural refuge for camouflaged shrimp. Accordingly, it is also better to choose the soil suitable for growing plants, preferably dark in color, on it the shrimps will look more contrasting. It is highly recommended to plant Javanese (or other) moss, riccia, Mayas, clad form in the aquarium. The Indian almond leaves lying on the bottom have a good effect on the well-being of babaulti shrimp. Natural driftwood will also fit perfectly into the design. 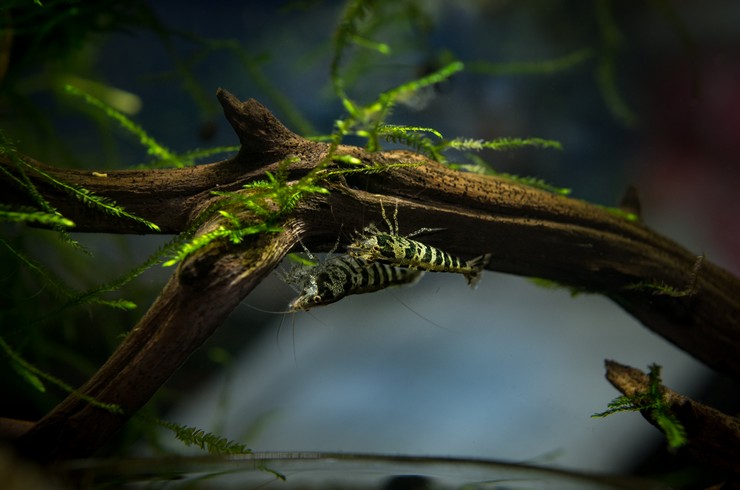 To keep the water clean, you need a classic internal or air-lift filter. Once a week, you need to change 20% of the water from the aquarium to fresh. Fertilizers and medications should be used with caution. If they contain copper, then these products pose a danger to invertebrates in the aquarium.

Babaulti shrimps are completely harmless creatures, so they can be settled exclusively with the same peaceful species of slaves. Small characin (tetras, neons), lessors, and micro-rasses, as well as calm types of catfish (corridors, ancistrus, ototsinklus), are best suited.

Any predatory fish must be excluded immediately, for them shrimp is only live food, and even an awesome camouflage is unlikely to save it from being eaten.

Grannies get along well with other small shrimps: cherries, rili, crystals, etc. 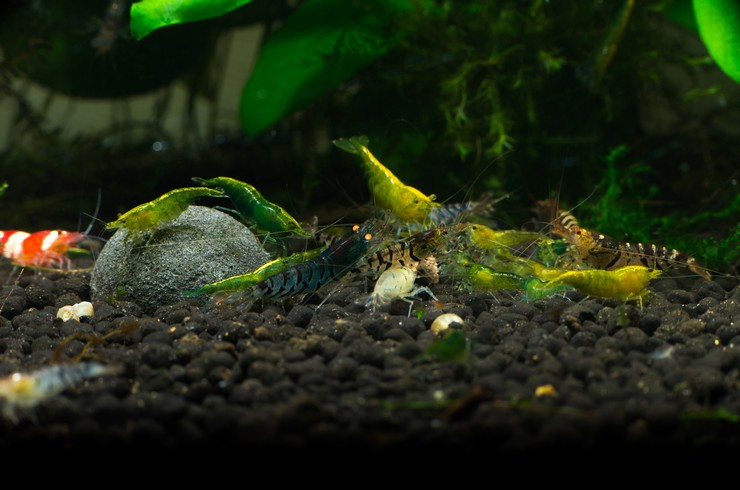 Babaulti shrimps are omnivorous: algae form the basis of their diet, but not a single crustacean will refuse to eat the remains of fish food falling to the bottom. However, the ideal option would be to feed the babaulti shrimp with specialized crustacean foods from the Tetra Crusta series. They are fully balanced and contain many nutrients and vitamins as well as natural color enhancers. The special structure allows the feed pellets to keep their shape, so they do not pollute the water.

Tetra Wafer Mini Mix is ​​also a good choice – a universal food for all bottom dwellers. It quickly sinks to the bottom, where it becomes available to shrimp. It is also additionally enriched with spirulina algae to increase the body’s resistance to disease.

Babaulti shrimps are unusually easy to breed in the aquarium, no special conditions are required. Sexual maturity in crustaceans occurs at the age of about 3 months, they can bear offspring 4-6 times a year. The number of eggs in a clutch is 12-20 pcs. 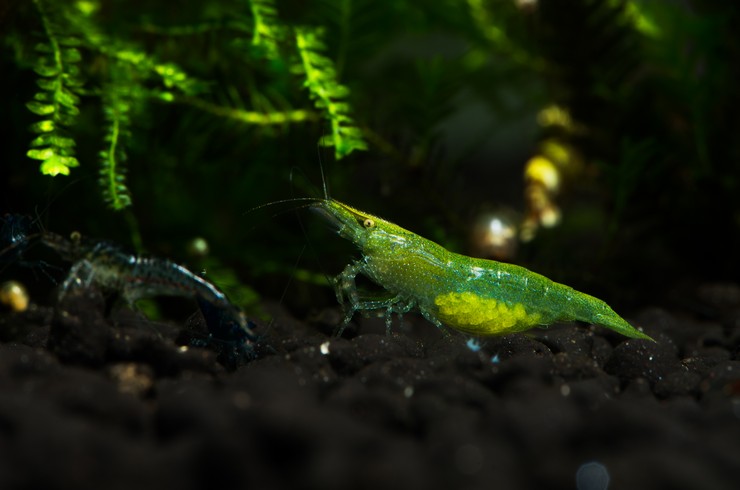 The caviar is small, green in color; the female bears it, fixing it on her abdominal limbs. The incubation of eggs lasts about 30 days, after which babies 1-2 mm in size are born from it, which are capable of independent nutrition. When growing juveniles, riccia and moss, in which young crustaceans hide, are very helpful.

In an aquarium with newborn shrimps, regular water changes should not be forgotten – up to 20% of the volume of the aquarium. This has a positive effect on their shedding and growth.