Many aquarium fish gain popularity decades after their first discovery. A striking example of this is the Barbus Denison. The first scientific description of this bright fish was made back in 1865, and the species became widespread only after a major international exhibition in Singapore in 1997.

Denisoni Barbus (Sahyadria Denisonii) is a fish from the carp family. It got its name in honor of the governor of colonial India, William Thomas Denison, who held this position from 1861 to 1866. The name of the genus “Sahyadri” comes from the local name of the Western Ghats mountain range, where the species was found. 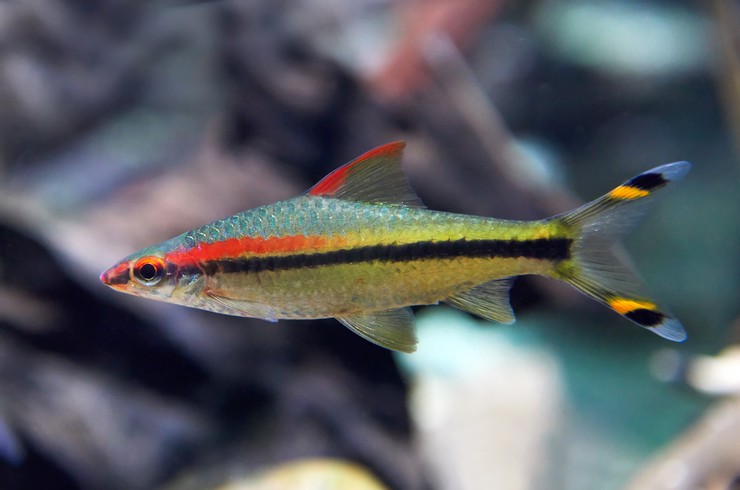 Unfortunately, due to the high cost, difficulty in reproduction, and maintenance, Denisoni barbs are not as popular as other types of barbs. However, this species is highly prized by aquarists for its unusual coloration and interesting behavior. This is a large, active, and bright fish.

Unfortunately, the early years of the species’ popularity hit natural populations hard due to barbaric fishing for the purpose of sale. The Barbus was listed in the International Red Book with the status of “Endangered”. The Indian authorities have banned the capture of fish in nature, and now Denisoni barbs are grown on special fish farms in Southeast Asia.

Like other inhabitants of fast mountain rivers, the Denisoni Barbus has an elongated torpedo-like body, ideal for fast swimming. Natural individuals sometimes reach 15 cm in length; in an aquarium, fish are usually no more than 10 cm.

The caudal fin is forked, with black and yellow stripes on its blades. The first rays of the dorsal fin are scarlet, the pectoral and pelvic fins are colorless. 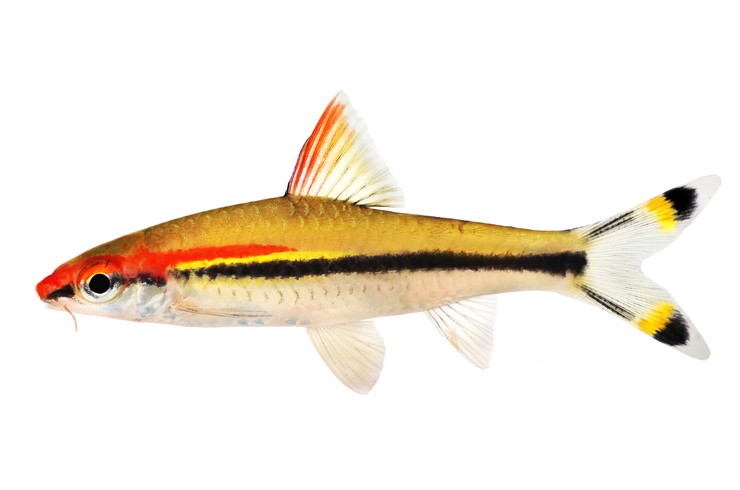 The main body color is silvery-gold. A black stripe stretches from head to tail, above which there is another one – bright red, but extending only to the middle of the body. In mature individuals, greenish stripes appear on the head.

Sexual dimorphism is not pronounced; females differ only in a more rounded abdomen.

Barbus Denisoni is endemic to the southern states of India (Kerala and Karnataka). On this territory, there is a large mountain range – the Western Ghats. It is in the upper reaches of mountain rivers and the reservoirs formed by them that schools of these attractive fish can be found. Denisoni barbs love fast currents, oxygen-rich water, and dense vegetation. The soil in such streams is usually rocky, the water is highly mineralized.

Barbus Denisoni can hardly be called an unpretentious fish. To create comfortable conditions for her, you will have to work hard. It is vital to keep fish in schools of 8-10. Solitary keeping will cause severe stress in this Barbus and dramatically shorten its lifespan. The minimum volume of the aquarium for such a flock should be at least 200 liters. It is desirable that it be stretched in length because the fish are very fond of swimming rapidly. 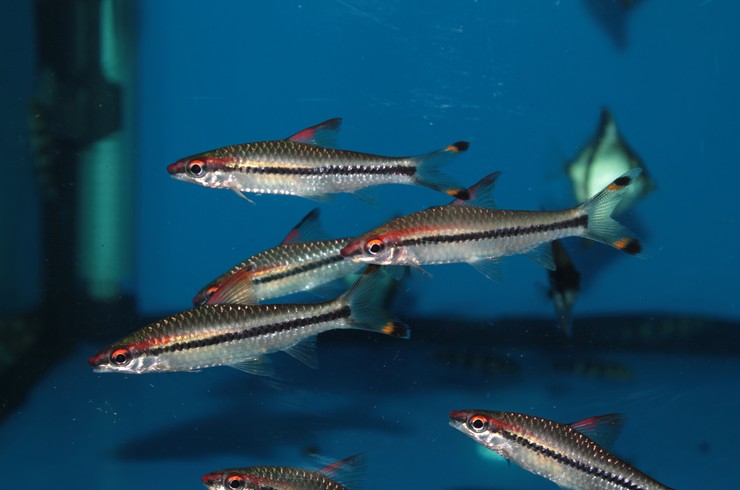 Denisoni barbs are characterized by increased fearfulness. Any sudden movement in front of the aquarium can lead to panic and attempts to jump out of the tank, so the aquarium should be equipped with a lid.

The bottom of the aquarium can be covered with river sand, granite chips, small pebbles. It is advisable to select dark shades, they will better emphasize the color of the fish. Several natural driftwood or stones can be installed as decorations. It is better to plant rows of living plants along the side walls: elodea, cryptocoryne, hornwort, Vallisneria, etc.

The fish have no special requirements for lighting, but brighter lighting will have a good effect on the growth of living plants and the appearance of the fish.

The aquarium must be equipped with a filter and an aerator because in nature barbs love reservoirs with clean water and a lot of oxygen. A moderate current will keep the fish in good shape. High content of nitrogenous compounds must not be allowed, for which water changes are required weekly (25-30%).

Barbus Denisoni is a relatively peaceful fish and, in a suitable aquarium, gets along well with species of similar size and temperament. Sometimes there is information that this species is showing aggression towards the neighbors in the aquarium, but it often turns out that this is caused by a violation of the conditions of detention, when Denisoni barbs are kept alone or in pairs. This causes extreme stress in the fish and can lead to inappropriate behavior. When keeping fish in groups of 8 or more, such phenomena are practically not observed. 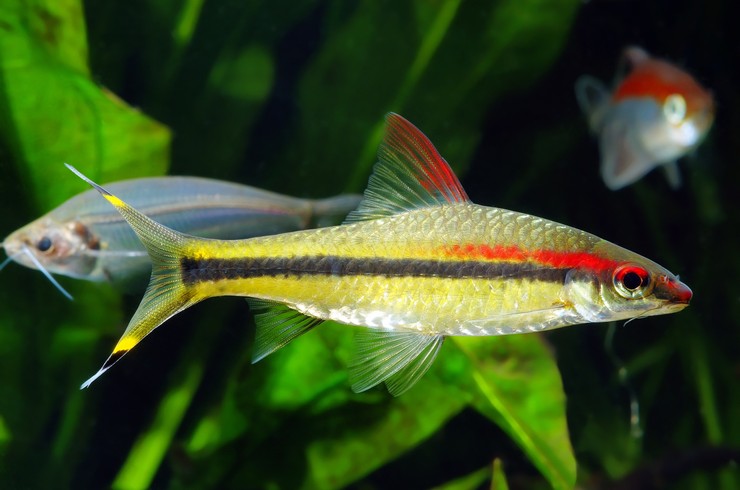 Among the most suitable neighbors are other types of barbs (Sumatran, fiery), Congo, thorns, scalars, peaceful catfish (corridors, thoracotomy).

Barbus Denisoni belongs to the omnivorous species. The basis of the diet of fish in nature is insects and their larvae, as well as algae. When kept in an aquarium, fish are happy to consume high-quality dry food in the form of flakes, chips, or small granules. It is not recommended to feed the barbs with live or frozen food, as they can become a source of infection in the aquarium and do not contain all the necessary nutrients and vitamins.

TetraMin flakes or pellets are perfect as a base feed. They are completely balanced, created from selected components of animal and plant origin, additionally contain a prebiotic for comfortable digestion of fish.

TetraPro Algae Chips can also be used as a daily food for Denisoni barbs. Their peculiarity lies in the fact that they are manufactured at lower temperatures, and this allows you to keep even more nutrients in the feedstock. And the spirulina algae concentrate in the center of the chips will fully satisfy the fish’s need for vegetable food.

And to make the red stripe on the fish’s body look even brighter, be sure to introduce food with a high content of carotenoids into the diet – Tetra Rubin or TetraPro Color.

Breeding Barbus Denisoni is a rather laborious process. Sexual dimorphism is not pronounced. Sexually mature females are usually less colored and have a more rounded abdomen.

Spawning is gregarious, so for reproduction, you need an aquarium of at least 200 liters, where a group of 7-15 barbs will be launched. The bottom must be covered with Javanese moss. To stimulate spawning, it is recommended to raise the water temperature to 28 ° C, and acidify the water. After the spawning process is completed, the fish are removed from the spawning aquarium.

Larvae half a centimeter in size appear in a day and begin to swim on their own in another week. The fry is fattened and sorted regularly, while the water parameters are slowly raised to normal values.