Long-bodied aquarium fish are popular among aquarists due to their simplicity in keeping conditions. These vibrant and active aquatic inhabitants will no doubt adorn any aquarium. In our article, we will tell you about one of the most famous breeds of Japanese breeding goldfish – shubunkin.

Shubunkin Goldfish is a long-bodied breed of goldfish, which is distinguished by its color of spots of different colors, scattered in random order over the body, and transparent mosaic scales. The name of the form comes from the Japanese word “shubunkin”, which translates as “red brocade”.

For the first time, the breed was obtained in 1892 in Japan by crossing the telescope of a calico, an ordinary goldfish, and a single-tailed wakin. The official name was given to the fish in 1900, and two years later the breed was presented to the general public. Shubunkin’s color is dominated by red, blue, white, and black colors.

Like other long-bodied breeds of goldfish, it is distinguished by its endurance and unpretentious maintenance. Fish are active and peaceful. 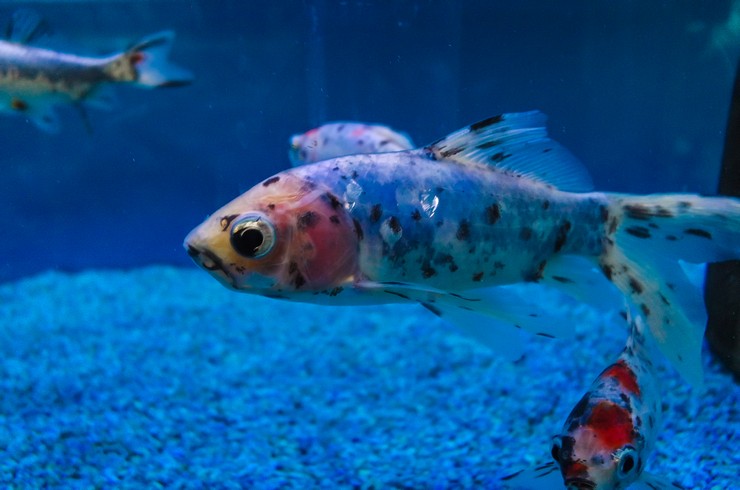 There are several main varieties of shubunkin: American, London and Bristol. But this division is rather arbitrary. For example, the American shubunkin in Asia is considered a calico variety of a comet, and the London one is an ordinary goldfish. The Bristol shape was developed in England in the early 1920s and features a highly developed caudal fin with rounded ends.

In appearance, the Shubunkins strongly resemble comets. Their body is streamlined, elongated and slightly compressed from the sides. The caudal fin is single, has two developed lobes. The scales are small and transparent, for which Shubunkina is sometimes called a “scaleless goldfish”.

The average body size of a shubunkin in a suitable aquarium is about 15 cm. But when kept in large containers or ponds and abundant feeding, individual specimens can grow up to 30 cm.

Shubunkin’s main pride is his color. It is a chaotic mixture of spots of various colors – blue, white, black, red, etc. The general background of the body is usually white, but there are also rare varieties with a blue background, which are very highly valued.

Like all modern goldfish, shubunkin was created by human hands and does not occur in nature. That, however, did not stop him from becoming one of the most popular aquarium inhabitants in the whole world.

The ancestral form of all goldfish, without exception, is the goldfish (Carassius gibelio).

Shubunkin can rightfully be called one of the most unpretentious goldfish. Representatives of this breed feel great in a wide range of water parameters, they are able to live not only in aquariums but also in decorative ponds.

Shubunkins are large and active aquatic inhabitants, so they need a large aquarium (at least 30 liters of water per individual), preferably elongated so that the fish can actively swim. Very popular around aquariums, even of medium size, are not suitable for keeping shubunkins; it is better to pay attention to classic rectangular aquariums. You can keep shubunkins individually and in groups.

If you are the owner of a garden pond, then it is perfect for the settlement of these goldfish.

Active shubunkins can easily jump out of the aquarium, so take care of a lid or coverslips in advance. 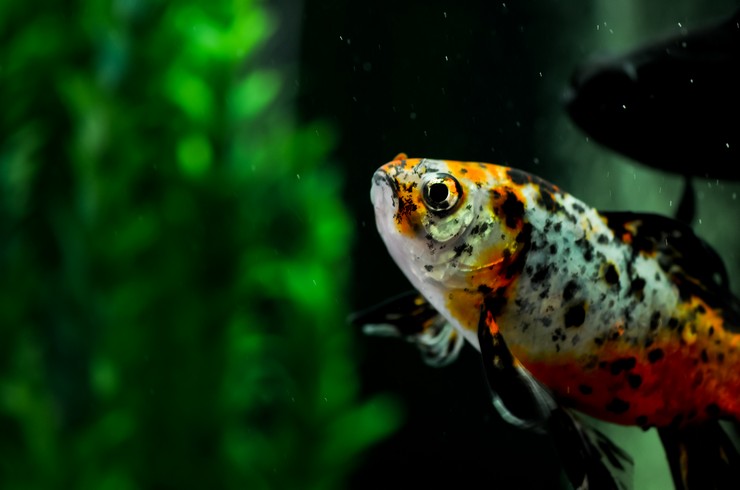 It is best to use rounded pebbles as soil, which the fish cannot swallow. The fact is that the shubunkins love to dig up the ground in search of food and can accidentally swallow a small stone.

The decorations can be chosen at your discretion, the main thing is that they do not contain sharp edges about which the fish can damage their fins and narrow holes in which they can get stuck. Live plants are practically not used in aquariums with shubunkins. Goldfish are predominantly vegetarian, so they quickly destroy all vegetation in the aquarium by eating or digging it up. The most resistant to their onslaught is the Anubias, some Cryptocorynes, and the giant Vallisneria. But the most commonly used artificial plants, for example, Tetra DecoArt Plantastics.

High-quality filtration in an aquarium with shubunkins is vital. Fish have an excellent appetite and eat a large amount of food, respectively, quickly pollute the water. In addition, they regularly pick up dirt from the bottom of the aquarium by digging into the soil. The best choice is to install a powerful external filter. A compressor is required for aeration. Be sure to replace 20% of the water in the container with fresh water once a week. A thermostat in an aquarium with shubunkins will be superfluous because these are cold-water fish that do not require additional water heating. Any lighting is suitable, but it is better not to allow excess light to avoid the outbreak of algae.

The best choice for keeping a shubunkin will be a species aquarium with a group of these bright, mobile fish.

Other long-bodied breeds of goldfish, for example, comets, are well suited as neighbors in a shared aquarium with shubunkins. Shubunkins often live well with veil-tails and telescopes.

In no case should you keep goldfish with aggressive cichlids and active species, those who like to pinch fins, for example, Sumatran barbs?

The basis of the diet of shubunkins should be food with a high content of the plant component. Popular protein foods – live (frozen) bloodworms, brine shrimp, or tubifex are not recommended due to their imbalance and the potential threat of contamination of the aquarium. The opinion widespread among some aquarists that shubunkins can be fed with semolina, rice, and other cereals is also mistaken. Such a diet can lead to health problems and reduce water quality. 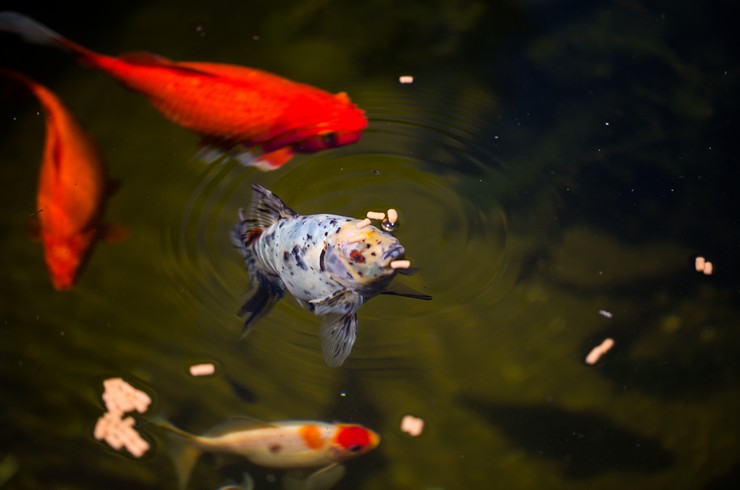 The best option for feeding shubunkins will be high-quality dry food. They are fully balanced, nutritious, and highly digestible, hence reducing fish waste, allowing the water to stay cleaner for longer.

Tetra has developed the Tetra Goldfish range of specialized foods, especially for goldfish. It includes more than 10 varieties of feed, differing in the form of release and additional functions. Each food is formulated with BioActive, a carefully selected complex of vitamins for the health and longevity of your pets.

It is necessary to feed the goldfish several times a day in small portions, which will be eaten by them in a few minutes. Do not overfeed your pets. 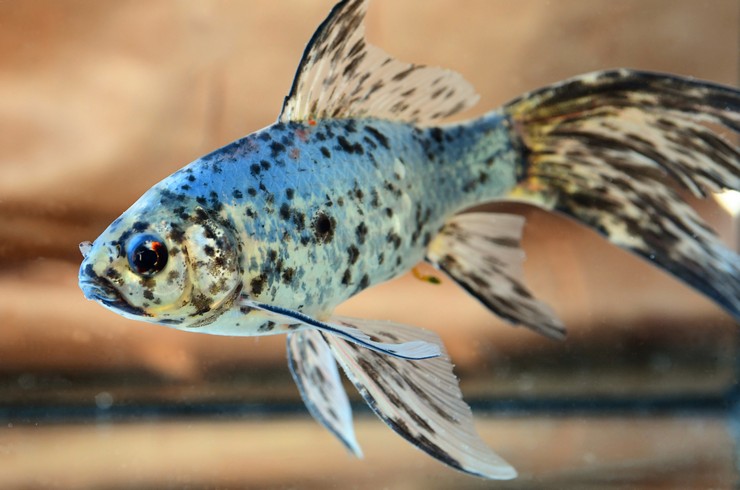 To breed a shubunkin, a pair of suitable producers will be required. Unfortunately, sexual dimorphism in fish is not pronounced. Determining the sex is guaranteed to be possible only during spawning – white tubercles appear on the head and gill covers in males, and the female’s abdomen is rounded from the eggs.

For the reproduction of shubunkin, you will need a separate spacious aquarium with a volume of at least 70 liters. Live and artificial plants are placed in it, light filtration and aeration are organized.

A week before spawning, future producers are seated and abundantly fed, after which they are transferred to spawning grounds. The stimulus for spawning is a slow decrease in temperature to 11-15 ° C, and then a gradual increase by 2 ° C per day. Before spawning, the male actively looks after the female, pushing her to the plants, where the female lays small eggs. The fecundity of females is extremely high – some are capable of laying several thousand eggs.

Once the process is complete, the producers must be removed from the aquarium so they do not eat their own eggs. Incubation lasts 4-7 days depending on the water temperature. The fry is dimly colored; they begin to take on the color of adult fish only at the age of several months.