Among tropical gastropods, there are a sufficient number of species that, when kept in aquariums, help to fight such a scourge as algae. The Pokémon snail is a great example of such invertebrates. But why the mollusk received such a name, and whether there are any difficulties in keeping it, read our article.

The snail with the unusual name “Pokemon” is none other than the small-speckled pond snail (Radix rubiginosa), a close relative of the common pond snail, which can be found almost everywhere in temperate climates. It lives in tropical regions of the planet and is an attractive aquarium pet. The mollusk received the nickname “Pokemon” for the developed triangular outgrowths of the body, reminiscent of the ears of fabulous creatures from the popular animated series. Sometimes this is the name not only of the above-mentioned species but also of other representatives of the genus Radix since in morphological terms they differ slightly from each other.

These small mollusks are suitable for keeping in most tropical aquariums. They are miniature in size and do not damage live plants. At the same time, they provide good help in the fight against algae, even as unpleasant as blue-green ones. 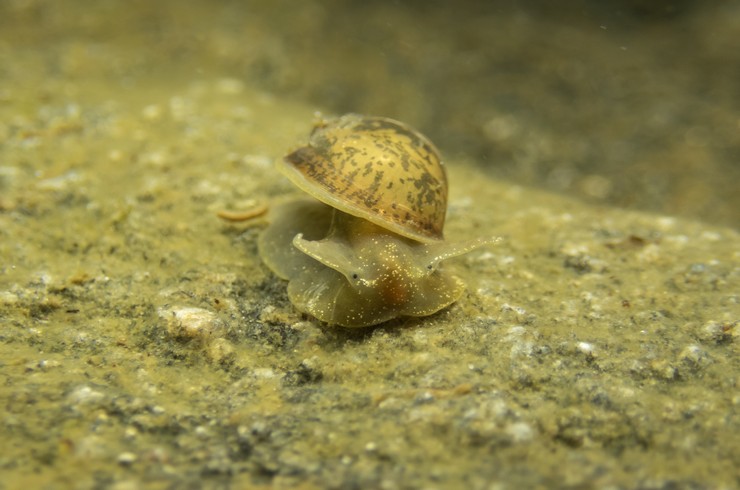 The Pokemon snail is a small mollusk, the size of its shell does not exceed 2 cm. The shell is elongated, with 4-5 turns, pointed at the end. The mouth is wide.

Most often, the shell is painted in various shades of brown, but under certain conditions, it can be bright yellow or beige. Light spots are often found on the surface of the shell, and white stripes appear clearly under strong aquarium lighting. Thus, the color is directly influenced by water parameters, lighting level, and temperature.

The leg also exhibits color variability. It can be yellow, gray, and almost black. Small dots that look like nail polish glitter are a characteristic feature.

The range of the Pokemon snail is represented by the territory of modern Southeast Asia. These species can be easily found in the shallow waters of the river systems of Malaysia and Indonesia. Stagnant bodies of water and swamps are also examples of biotopes where mollusks thrive. They live at the bottom, under leaf litter, where they feed on detritus.

Keeping Pokemon snails in an aquarium is a snap as they don’t require any extraordinary comfort conditions.

You can even settle these invertebrates in small aquariums: 5-10 liters will be enough. To prevent the escape of shellfish, it is recommended to cover the container with a lid. Any soil is suitable, the main thing is that it is good for the plants, which are better to plant in an aquarium with Pokemon.

Pokemon snails love clean water saturated with oxygen. Be sure to equip the aquarium with a filter and provide aeration. 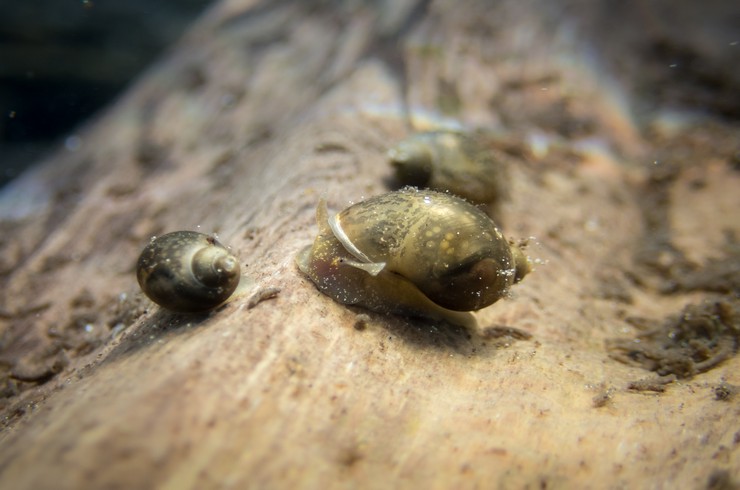 Mollusks are able to withstand gradual drops in water temperature up to + 5 ° С, however, their activity is noticeably reduced.

Pokémon snails can be an excellent indicator of aquarium health. The fact is that in nature, the breeding season for them begins during the rainy season when the rivers overflowing the banks wash off the top layer of the soil and bring a large amount of organic matter into the waters. If there is an excess of organic matter in the aquarium, then you can observe how the mollusks rise to the surface of the water, eat the bacterial film, if present, and also begin to actively multiply. This should serve as a signal that it’s time to do water tests and clean up the aquarium.

It is necessary to exclude aggressive cichlids, which like to bite snails by the leg, as well as tetrapods (they feed on snails) and some labyrinth fish (gourami, macropods, cockerels, etc.), which sometimes attack defenseless gastropods, from the roommates.

Do not add predatory Helen snails to the Pokémon: they will easily deal with the population of miniature snails in the aquarium.

The Pokemon snail is a typical detritivore, the diet of which is based on decaying parts of aquatic plants and the remains of fish food. In an aquarium, snails are excellent at eating various types of algae, helping to keep it clean, as well as a bacterial film on the surface of the water. You can not be afraid of living plants – mollusks do not touch them.

If necessary, you can feed your Pokémon snails with Tetra Pleco Spirulina Wafers, a sinking pill for bottom fish with a high content of spirulina.

Pokemon snails are hermaphrodites, so they will not have problems breeding in an aquarium. For successful fertilization, it is necessary that two individuals exchange sexual products with each other.

The mating process in mollusks is very fun. One of the snails rises to the surface, while others are hung on it, forming a semblance of a bunch of grapes. However, if you touch this structure, then it will quickly disintegrate, and the snails will go to the bottom.