The Beagle Harrier is a medium-sized, strong-built, tricolored hound with strong hunting instincts. Beagle Harrier is friendly and affectionate with her family. The appearance of these dogs traces the features of the Beagles and Harriers, from which they originated. Nevertheless, it is a separate independent breed, recognized by many canine associations, including the FCI. 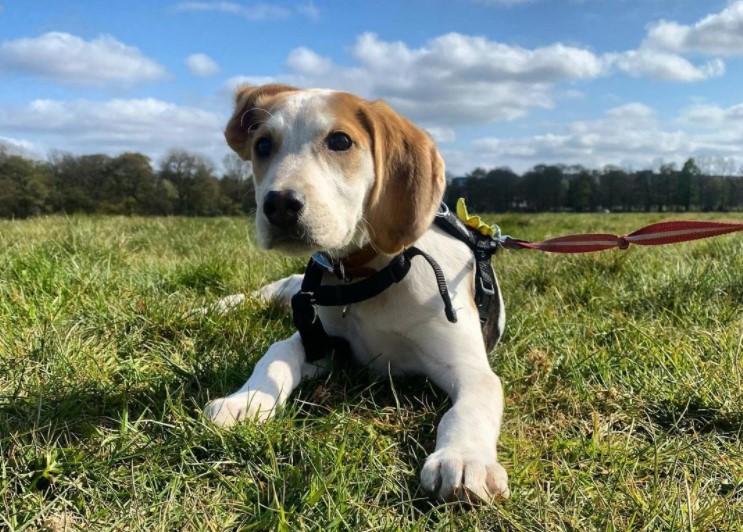 There are several conflicting versions of the origin of the Beagle-Harrier. The word “harrier” itself has ancient French roots and means “hunting dog”, so it can be assumed that the earliest Harriers originated in Central Europe and are the result of crossing a Bloodhound, and Basset Hound. Beagles were bred in the UK. By the middle of the 18th century, two types of hounds for hunting a hare had already formed: the Southern Hound (from which the modern Harrier originated) and the Northern Beagle, but the ancestor of modern Beagles was a dog bred in the middle of the 19th century on the basis of Northern Beagles, Hounds, and other breeds. The Beagle Harrier was bred in France in the 19th century by crossing a Beagle and a Harrier in order to obtain a medium-sized dog while maintaining hunting qualities. To whom the breed lovers should be grateful is unknown. The authorship is often attributed to Baron Gérarrone, a French artist with Italian roots, but this version seems implausible to many. 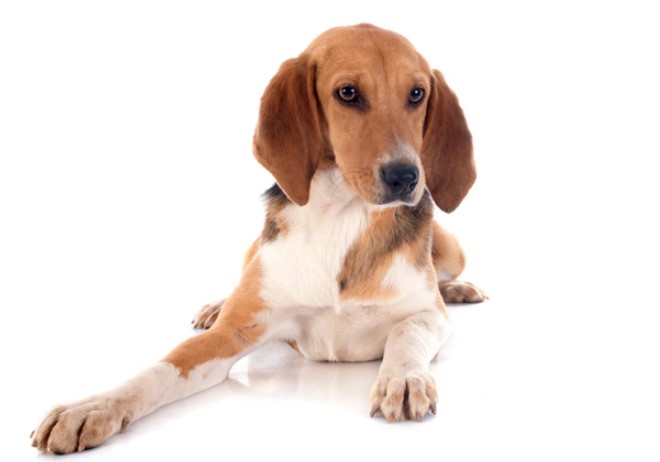 The Beagle Harrier is a medium-sized dog, agile and energetic, well-balanced, strong build, well-muscled and short hair. Gender is expressed. Height at withers 45-50 cm. Head of moderate size. The skull is very voluminous and wide. The muzzle tapers slightly towards the nose. The bridge of the nose is straight. The lobe is well developed and black in color. The eyes are dark in color, open, with a lively intelligent expression. The ears are short, moderately wide, set at eye level, drooping, close to the skull. The ends of the auricle are turned outward, and in the middle part, they form small folds. The back is straight and short. The loin may be slightly arched and firm. The chest is deep. The ribs are moderately rounded, the false ribs are long. The belly is not very tucked up. Legs straight, parallel, strong. Feet strong, tightly knit, short. The pads are elastic and thick. The gait is stable, energetic, and elastic. The coat is not too short, close to the body, thick. Tricolor color: 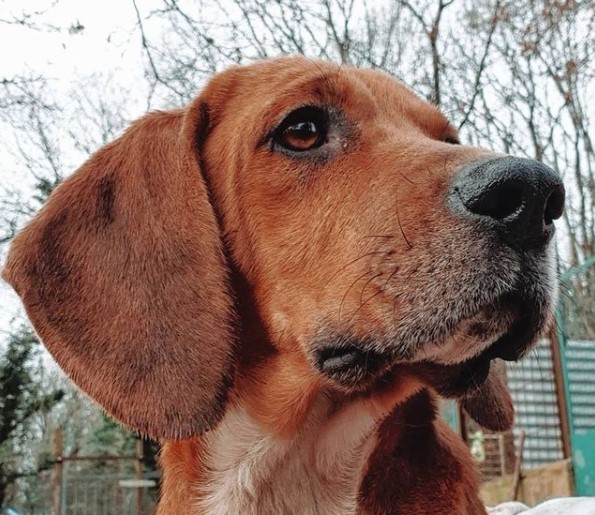 By nature, temperament, and behavior, the Beagle Harrier is a typical hunting dog adapted to work in a group and one by one. The dog has a gentle disposition, energetic, friendly, never showing aggression towards other dogs. The Beagle Harrier is very attached to the owner and other family members. The dog gets along with domestic cats if he grew up with them. At the same time, the neighboring cats will never become friends with him. Beagle Harrier gets along well with children of all ages. Very curious and mischievous. Beagle Harrier is often careless and gets into trouble. The owners say that Beagle Harriers have a great sense of humor, they are known for their antics and pranks, they are very sociable and would prefer not to be the only dog ​​in the family. Loud barking will warn the owner about everyone who approaches the house, animals, and people. Acquaintances will be greeted with a joyful wagging of the tail. In general, Beagle Harriers are very talkative, they will communicate with other dogs and people using various sounds, moans, sighs, whining, grunting, muttering, and of course, barking.

The Beagle Harrier is a natural-born hunter, but this does not prevent him from being a wonderful family dog and companion. 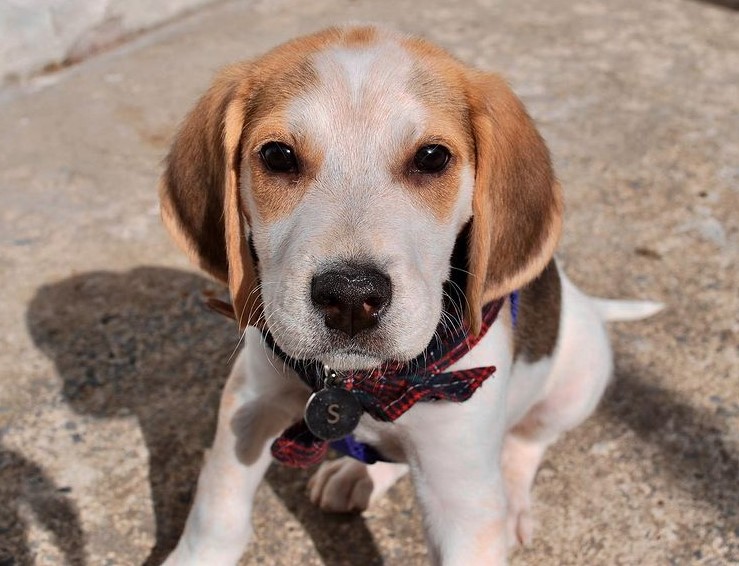 In France, Beagle Harriers are kept in large enclosures in packs. Alone, they are poorly suited for open-air cages, require a lot of attention, communication and do not tolerate severe frosts very well. The best option for a Beagle Harrier is to live in a private house with a large yard. The fence should be high enough, the hound can easily overcome an obstacle with a height of 1.5-2 m if it is interested in something from the outside. The dog is also an excellent shrew. Electric fences for hunting breeds are ineffective. Short-term pain will not stop the “adventurers”. Beagle Harrier can be kept in an apartment, but difficulties may arise due to their excessive energy, a tendency to excessive barking, howling, the need to walk a lot. If the Beagle Harrier does not get the necessary physical activity, the dog can become destructive, nervous, and disobedient.

The Beagle Harrier is a very energetic and freedom-loving dog, which definitely needs to walk in the open area.

The hound needs long walks. For this reason, it is not suitable for people who are not ready to walk for hours in nature. It is also important to take into account the pronounced hunting instinct and curiosity of the dog, which makes it constantly find a trail and follow it at a speed that a person cannot. Beagle Harrier loves a variety of active games. Can become a running or cycling companion, but not earlier than one year of age. 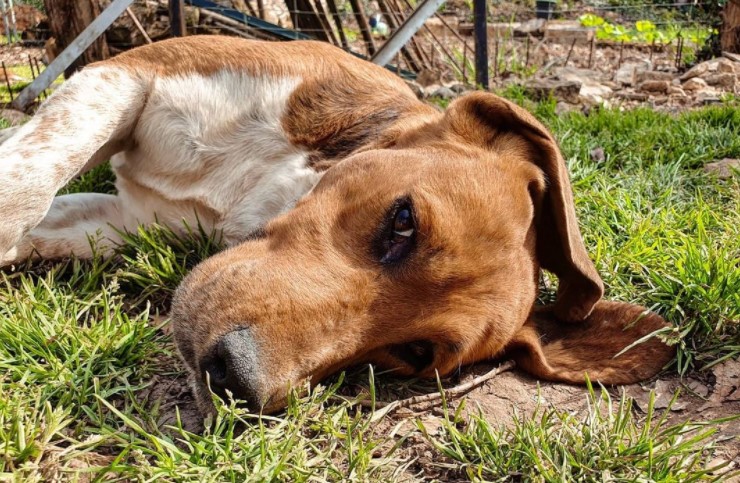 Molting in the Beagle Harrier is moderately expressed. Seasonal is especially noticeable, the rest of the time, with regular hair care, practically no shedding. Brush the coat with a thick brush or a special mitten for short-haired breeds 2-3 times a month. As needed, clean the auricle, cut the claws and rub the eyes. The owners also recommend that from puppyhood teach the dog to brush his teeth and perform the procedure at least once a week. This will prevent plaque, calculus, and other dental problems from forming in adulthood. Bathing as needed, but not more than once a month.

The Beagle Harrier is a prosperous breed. Most dogs rarely get sick with good care and nutrition. Of the hereditary diseases, only hip dysplasia and some ophthalmic diseases are known. Life expectancy is 12-15 years.