Puppies are born blind and deaf and are unable to regulate their body temperature. The weight of newborn Bernese Mountain Dog puppies is only 453-566 grams. In the first week of life, babies especially need the care of their mother.

She feeds the babies with milk, takes care of the condition of the coat, and maintains hygiene. During the first week of life, the weight of puppies, as a rule, doubles. But other changes occur, in particular, pigmentation of the nose lobe appears in the form of spots that darken over time. 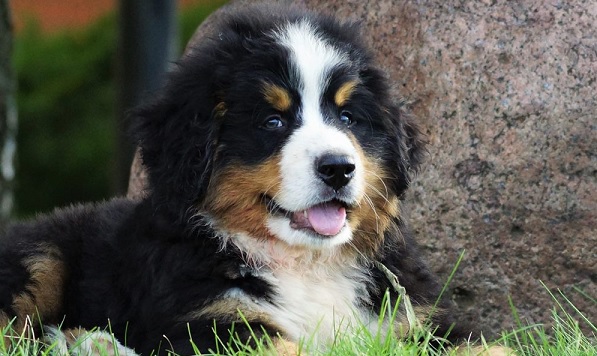 In the second week of life, Bernese Mountain Dog puppies still cannot see and hear, but their jaws are already noticeably developed. Babies gain weight at a rapid rate, most of the time they sleep and eat.

From the end of the second week, eyes begin to open. The process takes several days. The kids have already grown stronger and are making attempts to sit and stand. Due to instability, their gait seems “drunk”, they can clumsily walk a couple of steps, fall, and fall asleep on the spot. In the third week, the puppies interact more with each other, the relationship with the mother changes. They begin to lick it, bite playfully. By the end of the third week, babies’ eyes are wide open, they already hear everything, reacting to the noise with a start.

In the fourth week, the teeth erupt, the upper ones appear first. The jaws become even more powerful. Babies begin to feed, gradually transferring to solid food. Kids are very playful, they go to the breakup. Their curiosity pushes them to communicate with a person, to explore the premises. But they still sleep a lot. By the end of the fourth week, the dark blue eyes begin to darken. At this age, babies are already beginning to understand that they need to go to the toilet in the designated place.

Puppies of five weeks of age already bite painfully, they stand confidently on their feet and even try to bark. They become very playful and carry toys in their mouths. After switching to solid foods, babies often go to the toilet.

The incredible growth of Bernese Mountain Dog puppies is observed in the sixth week. During this period, it is already possible to make preliminary assessments of the exterior. Temperament becomes more obvious, which is assessed based on the interaction of puppies with each other and with a person. At this age, babies can be toilet trained, allow people who want to acquire a Bernese mountain dog to watch. During this period, the socialization of babies is important.

The final maturation of Bernese Mountain Dog puppies occurs by the age of 2-3 years, during which time they gain weight, a physique is formed. Often during the first year up to 18 months of age, animals look lanky, long-legged, clumsy. Often, babies who looked stocky and short-legged at an early age become long-legged. Irregular growth and skeletal development are normal for Bernese Mountain Dogs.

In the new home, during the first two weeks, it is important to take care of the adaptation of the puppy, building trust through affection and praise. The kid should get used to the touch of the owner, to the necessary care procedures, in particular to brushing teeth, ears, clipping nails. You should start with simple touches to the ears, paws.

You can bathe the puppy, but it is important to monitor the temperature of the water and thoroughly dry the baby’s coat, otherwise, hypothermia is likely.

At 4-5 months, teeth change, milk teeth fall out, babies intensively begin to chew and gnaw toys, as well as pieces of furniture. During this period, gum bleeding is possible, as well as babies may refuse to eat. At the same age, the first molt occurs. Children’s fluff falls out, a rough, shiny coat appears. The process takes several weeks. The coat lengthens as the dogs grow older.

During puberty, the behavior of dogs can change under the influence of hormones. A calm and obedient male can be self-willed, not pay attention to the owner’s commands, behave aggressively towards other males. Males begin to mark territory by raising their legs as early as 6 months, but in some cases, this occurs for the first time even at 18 months. In bitches, in most cases, the first heat occurs at 6-8 months. During this period, the female can behave nervously, restlessly, refuse to eat. In the period of 8-12 months, the owner must make a decision on neutering or neutering the pet.

The financial investment in inbreeding and the cost of raising puppies are reflected in the final cost of the dog. Such expenses include expenses for food, veterinarian services, training, toys, care, supplies, paperwork.

Breeders sell all puppies in a litter at different prices, depending on their quality, which is determined by their exterior and health. But the gender of the baby does not affect the cost.

So the price of a Bernese Mountain Dog puppy will vary depending on the class. Prices for pets destined to become excellent companions start at $2,500. Dogs of excellent quality are estimated higher – from $10,000.

However, finding the amount to buy a dog is only half the battle. As the baby grows, the cost of maintaining it will increase. A cute little puppy will grow into a large dog that requires a lot of food, time for grooming, and other hygiene and veterinary services.