The Bernese Mountain Dog is most common among four similar breeds such as the Great Swiss, Appenzell Mountain Dog, and Entlebucher Mountain Dog. It is distinguished from close relatives by its long coat.

The history of the origin of the Bernese Mountain Dog is rooted in the distant past. The breed is considered very ancient and the exact time of the origin of dogs is not known for certain, as well as what were the ancestors of these amazing animals. However, assumptions still exist and it is customary to rely on them. In addition, there are art objects that suggest that the breed existed for a very, very long time, for example, in a painting from 1651 by the Dutch artist Paulus Potter, farm dogs are depicted, outwardly very similar to the Bernese Mountain Dog. 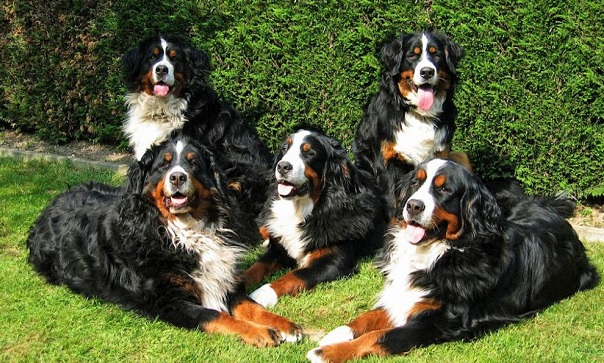 It is believed that the ancestors of the Bernese Mountain Dog were the Molossians – the war dogs of Roman warriors who invaded Switzerland more than 2000 years ago. However, the remains of large animals were discovered long before the invasion of the Romans, so this version cannot be considered the only correct one.

The modern breed was developed as a result of crossbreeding of animals that lived in the countryside around Bern in Switzerland, where dogs were valued for being loyal companions and hardworking helpers. A large dog, with well-developed muscles, strong bones was perfect for transporting small loads, in particular cans of milk, which the locals handed over to the cheese dairy. Dogs demanded less food than the same horses, and many villagers could afford them.

With the onset of the industrial revolution, the need for the use of dogs for agricultural purposes decreased, in addition, other breeds of yellow-white and red-white colors, similar to St. Bernard, were gaining popularity. Then the enterprising owners of the Sennenhund did not miss the opportunity to earn extra money and sold their dogs under the guise of St. Bernards, which, by the way, then had a red or brown color, and not black, like modern dogs.

Until 1892, no one thought of breeding the breed, until a professor named Franz Schertenleib, an innkeeper and winemaker from Burgdorf, took steps to preserve and recognize the breed. Franz Schertenleib became the owner of the dog in 1890 and was so fascinated by the breed that he did not remain indifferent to the problem of its disappearance and began to search for good individuals that could serve as breeding ones. After a long search, the dogs were selected, and the professor, together with a few other fans of the breed, began to restore the breed.

At the beginning of 1900, amateurs of the Bernese Mountain Dog tried to achieve recognition of the breed by the Swiss Kennel Club, but they succeeded only in 1905, thanks to the persistence in preserving the breed of people belonging to Albert Heim (Albert Heim) – professor of geology at the University of Zurich, who brought the greatest contribution in the preservation of their beloved animals. Only 4 dogs have been registered with the Swiss Kennel Club.

In 1907, the Dyourbahler Club was established. The name is completely unaccustomed, but at that time the Bernese Mountain Dogs were called “Dyurbachlers” or “Dyurbahler dogs”. The name was given in connection with the place where they were first discovered – in a small area south of Bern called Dyurbach (Durrbach). However, there were other names that were given by distinctive markings, for example, by the shape of the blaze on the head, yellow eyebrows, markings on the muzzle, or the Bernese Mountain Dog was simply called a farm dog. So, the names that may seem like nicknames sounded like “eyes”, “yellow cheeks”.

At the initiative of Albert Heim in 1908, the name of the Durrbachler breed was changed to the Bernese Mountain Dog, which, according to the professor, most faithfully reflected the true origin of the breed. The breed standard was soon written.

After the recognition of the breed, the popularity of the Bernese Mountain Dogs arose and the dogs began to diverge across the eastern and western hemispheres of Europe.

Later, the breed received recognition in other countries, for example, in 1937 the breed was recognized by AKC (America), in 1970 – SKS (Canada), in Russia the Bernese Mountain Dogs appeared in 1989. In 1994, the National Club of the Bernese Mountain Dog breed was created in Russia. The popularity of the breed is growing steadily. The largest number of dogs is registered in Switzerland, Great Britain, Australia, Canada, America.

In 1948, breeders thought about improving the breed but had no idea what to do about this. But the question was resolved by itself, chance intervened and greatly simplified the task of the breeders. What happened by chance, without human intervention, the crossing of Bernese Mountain Dog and Newfoundland dogs, made it possible to obtain puppies of much larger size, calmer and more resilient, with a straighter coat. After several generations, the external characteristic features of Newfoundland disappeared, and an improvement in temperament was achieved. Modern Bernese Mountain Dogs have retained the basic qualities of their ancestors.