Gourami fish are very popular among aquarists, especially beginners. After all, they are distinguished by increased endurance, beautiful coloration, and interesting forms of behavior: what is worth only the habit of “feeling” everything in its path with the help of sensitive fins-strings.

Blue, or Sumatran gourami (Trichogaster trichopterus) – one of the representatives of the group of labyrinth fish. A distinctive feature of this group is the presence of a special organ, thanks to which the fish are able to swallow atmospheric air and use it for breathing. This evolutionary adaptation allows them to survive in water bodies with low oxygen content. Fish both in nature and in the aquarium should have free access to the water surface. The very name “gourami” is translated as “a fish sticking its nose out of the water.”

The second important feature of the genus Trichogaster, to which the blue gourami belongs, is the presence of modified pectoral fins. They are shaped like threads and serve as organs of touch, which allows the fish to navigate in troubled waters. In the aquarium, it is interesting to watch the gourami learn new subjects and their neighbors.

This species is unpretentious and does not require very large volumes of the aquarium, therefore it can be recommended for the maintenance of novice aquarists. 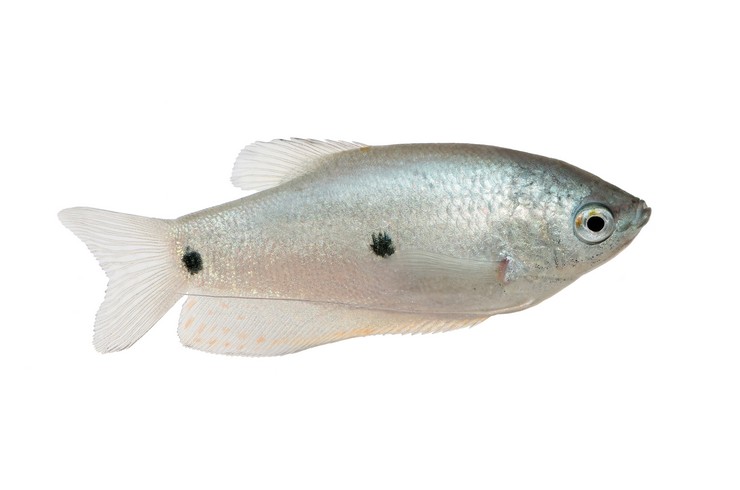 The body is bluish or gray. Dark spots of various shapes are visible on the sides of the body. A characteristic feature is the presence of two rounded spots on the body – one at the base of the tail, the other closer to the middle of the body.

The average life expectancy is 4 years.

The homeland of blue gourami is the countries of Southeast Asia: China, Cambodia, Vietnam, Laos, Myanmar. However, in our time they can be found in New Guinea, the Philippines, Colombia, Puerto Rico, etc. Probably, the fish were released into the wild waters of these countries by aquarists, and due to their unpretentiousness, they managed to adapt, survive and reproduce.

In nature, they prefer to live in stagnant or slow-flowing bodies of water – swamps, irrigation canals, rice fields, and ditches, densely overgrown with plants. They do not like strong currents. During the breeding season, they make long migrations. Locals use fish as commercial fish. 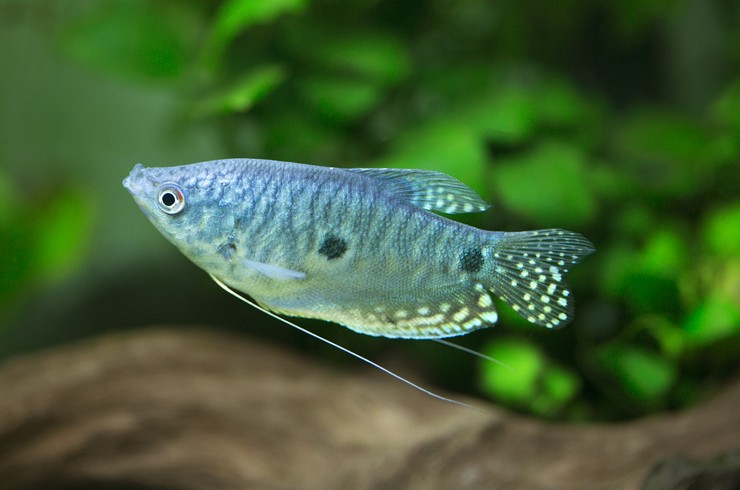 You don’t need a large aquarium to keep blue gourami. The fish is diurnal, keeping in the middle and upper layers of the aquarium. Several pairs of gouramis can be kept in containers from 80 liters. The aquarium should have a lid for two reasons: it will prevent the fish from jumping out of the aquarium and will help maintain a suitable temperature in the air gap above the water because swallowing cold air can lead to illness.

Despite the fact that the fish can navigate perfectly even in muddy water, it is necessary to organize good filtration in the aquarium, but without a strong current. But additional aeration is not required.

It is advisable to plant the aquarium with a large number of living plants – they will serve as a natural refuge for the fish. You can choose any soil suitable for the plants, but a dark one is better – this way the fish will look brighter. It is recommended to set up some grottoes or other shelters so that the fish can hide there as needed.

Once a week, you need to change 1/3 of the water in the aquarium.

Young blue gourami is great for keeping in community aquariums. However, with age, the character of the fish can change to the diametrically opposite, some individuals begin to fight with their relatives and other neighbors. It is desirable to contain gourami in pairs. If there are several males in the aquarium, then a large number of shelters must be provided.

Peaceful fish of similar size are perfect as neighbors: battles, scalars, irises, swordtails, minors, peaceful catfish. Small fish and fry gourami will destroy very quickly. You can not keep blue gourami with large aggressive species (many types of cichlids) and fishes that like to bite off fins: barbs, gold. Otherwise, the fish may be left without their long fins-strings. 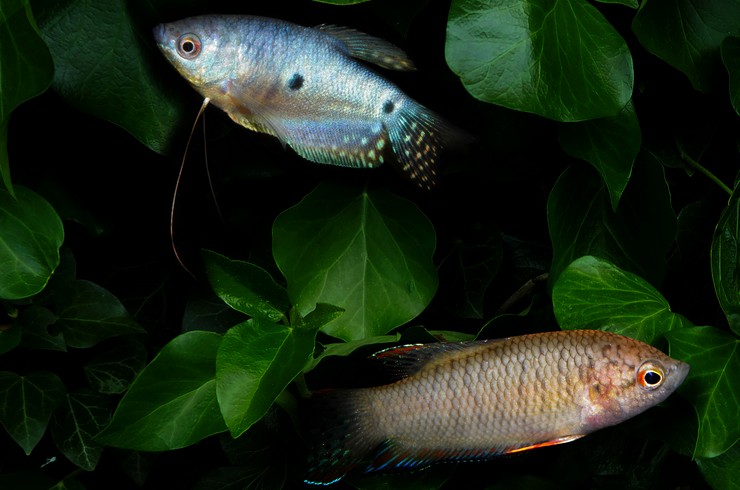 Blue gourami is omnivorous, but insects, their larvae, and zooplankton form the basis of their diet in nature. They even acquired the ability to shoot down flying insects with a trickle of water, and then eat.

Feeding gourami in an aquarium with live and frozen food will not be a good idea, because these foods are unbalanced and pose a threat of contamination of the water with infections and parasites.

It is better to pay attention to high-quality dry food:

It is worth noting that blue gourami very quickly destroys freshwater hydras in an aquarium.

It is necessary to feed the fish several times a day, but adult gourami can safely survive a week’s hunger strike.

Reproduction and breeding of blue gourami

Reproduction of blue gourami is not difficult. Distinguishing a male from a female is quite simple – you need to look at the dorsal fin. In the male, the end is pointed, and in the female, it is rounded. Before spawning, the fish are actively fed with high-protein feed. When the female’s abdomen from the eggs is rounded, the producers can be transplanted into a separate spawning aquarium.

For this, an aquarium with a volume of 40 liters or more with light filtration will suffice. The water level should not exceed 15 cm (until a labyrinth organ is formed in babies). Floating and small-leaved plants must be placed on the spawning grounds.

Spawning is stimulated by an increase in temperature to 26 ° C, after which the male begins to build a nest from bubbles and small pieces of plants. When the construction is completed, the male invites the female to the nest, wraps it around with his body, and squeezes the eggs, fertilizing them. The fertility of one female can be up to 800 eggs. Caviar is lighter than water and floats up, the male collects it in the nest and protects it. At this time, the female must be transplanted. The male is also removed but after hatching the fry.