If you want to have a bright and mobile fish in your aquarium, which in addition will help you get rid of unwanted snails, then the clown fight will be the best choice. True, this yellow-striped giant will require a very spacious aquarium. Read about how to keep this fish in our article.

Botia the clownfish (Chromobotia macracanthus) is a member of the Loach family. The pioneer of this fish is the Dutch explorer Peter Blacker. Botia clownfish was found in Indonesia in 1852. He also ranked the fish in the Botia family. However, after a large-scale revision of loaches, carried out in 2004 by the Swiss ichthyologist Mauris Kotelat, the fish was isolated into a separate family, Cromobotia. The name can be translated as “painted warrior”. The fish got its Russian name “clown” for its bright color and cheerfulness.

Botia grows to a relatively large size, so it is not suitable for keeping in small volumes. Unlike most other loaches, it is active not only in the evening but also during the day. The clowns are very mobile, it is difficult to take your eyes off the pets constantly dancing near the front glass.

The movements of the clowns’ fights deserve special attention. Their ability to move quickly (including tail forward) and maneuver between objects, as well as squeeze into seemingly impossible narrow gaps, is simply amazing.

Boating clowns love to rest their belly up or sleep on their side at the bottom of the aquarium. Fish often frighten inexperienced aquarists with such behavior, you need to get used to such “tricks”. 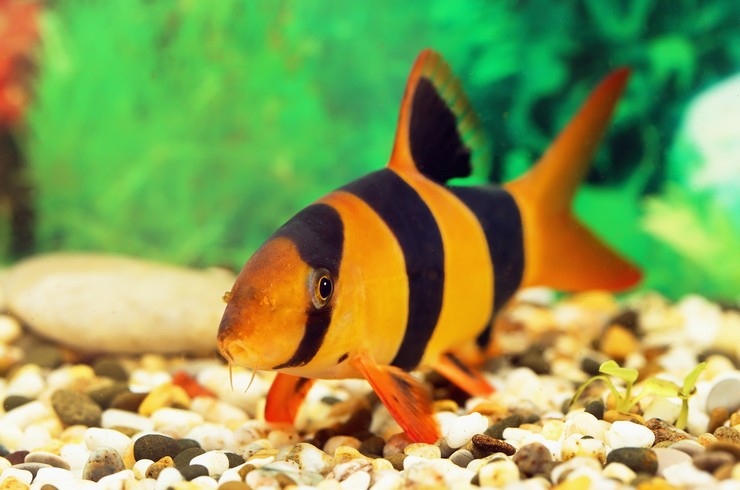 Another interesting feature of the fish is the presence of special infraorbital spines. In their normal state, they are tightly pressed to the body and are invisible. But in case of danger, they leap back sharply and can cause serious damage to the enemy. This is an effective defense against predatory fish and birds. Therefore, when catching fish from the aquarium, you need to be careful and make sure that the thorns do not catch on the net of the net.

While feeding these funny fish, you can hear characteristic clicks or clatter.

The bots clown has an elongated and laterally compressed body. In nature, fish can reach 40 cm in length, in an aquarium, the size is much more modest: 16-25 cm. The mouth is pointed and directed downward. Four pairs of sensitive whiskers are located around the mouth opening, allowing the fish to find food in the ground. The eyes are large, under them there are sharp spines, hidden by a skin sac. At the moment of danger, they lean back like a penknife, protecting the fish from enemies. 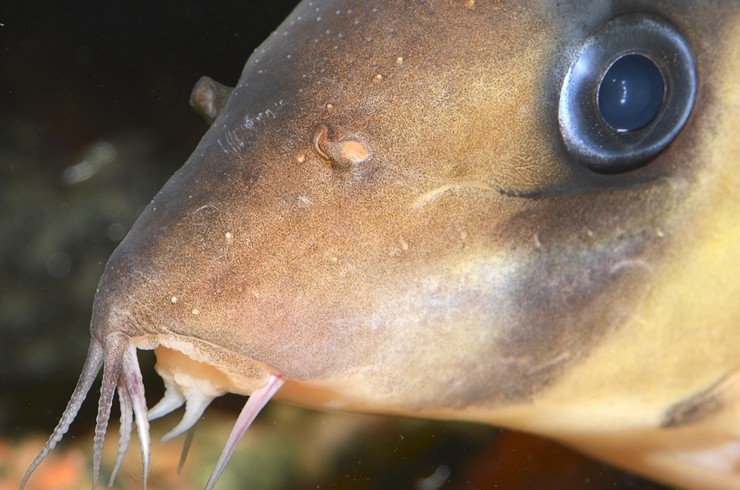 Bright attractive coloring is another “trump card” of the battle of the clown. The body is colored yellow-orange. On the body, there are three black transverse stripes in the form of a wedge tapering to the abdomen. One passes through the eye, the second in front of the dorsal fin, and the third captures part of the dorsal fin and goes further behind it. For such coloring in Western countries, clowns are called tiger fights (Tiger Loach). The pectoral and pelvic fins are reddish in color.

Young individuals have the brightest color, with age, they turn pale, but do not lose their attractiveness. Sexual dimorphism is not expressed.

The homeland of the clown fight in Southeast Asia. Fish are found in Indonesia, on the islands of Sumatra and Borneo (Kalimantan). Most of the time they live in rivers with fast or slow flow, gathering in large flocks. At the same time, they are equally often found both in clear and rather turbid water.

But when the rainy season comes, the fish migrate to reproduce. From December to February, the battles rush to the upper reaches of the rivers, where they spawn on the flooded plains among the reeds, after which they return back to their usual habitats. The total length of the route can reach 200-300 km.

In nature, fighting clowns keep in large flocks, therefore, at least three individuals must be kept at home, and better – about six. The minimum volume of the aquarium should be 250 liters or more. The lighting must be dim, for this, you can use floating living plants (pistia, riccia, etc.) 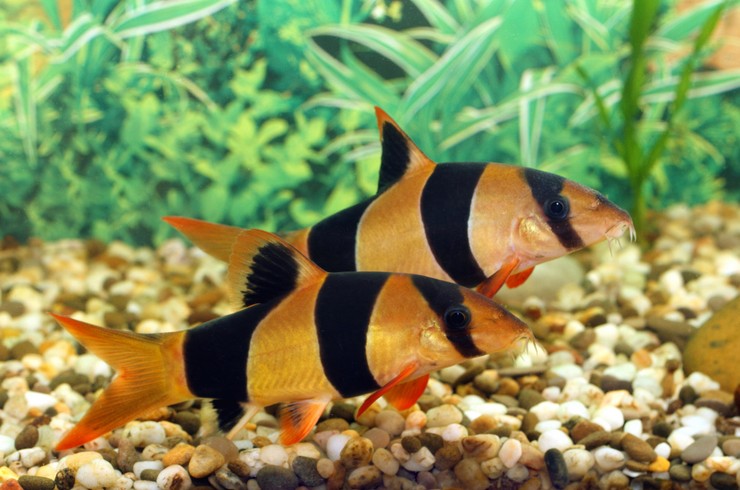 Quartz sand or small (2-4 mm) rounded pebbles can be used as soil. The sharp edges of the fish can damage their sensitive antennae. Botia mostly swim near the bottom in search of food, but can easily rise to the middle layers of the aquarium.

A large number of shelters must be provided in the aquarium: grottoes, caves, flower pots. 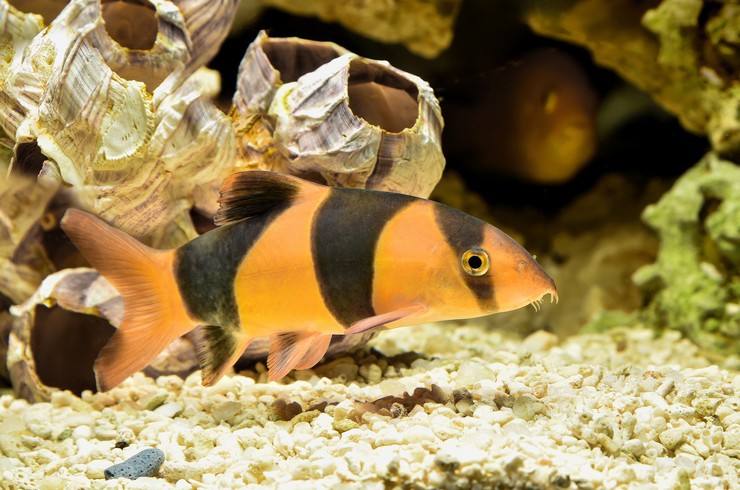 Firstly, battles love to explore the territory, which is very interesting to watch. Secondly, they can rest in them, both alone and in flocks. The only condition is that the decorations should have wide exits because battles of clowns can get stuck in narrow cracks, and not have sharp edges that can damage the delicate integuments of fish.

The water in an aquarium with battles must be clean and saturated with oxygen, so you need to use suitable equipment (external filter and compressor). It is advisable to create a current in the aquarium, the battles love it. Water changes of up to 30% are required once a week. It is highly discouraged to settle Bots in “fresh” aquariums. After launch, several months must necessarily pass for the environment to stabilize.

Since battles clowns like dim light, it is better to plant hardy plants with them: cryptocorynes, anubias, various types of ferns and mosses, echinoderms. Do not forget that vegetation is part of the natural diet of battles, so they are able to bite off tender parts of plants and sometimes eat holes in wide leaves.

It is important to remember that battles have very small scales, which makes them susceptible to disease. Therefore, it is very important to create the most comfortable conditions in order to prevent diseases, and, if necessary, use sparing dosages of drugs.

Boating clowns, even despite their large size, the fish are peaceful and compatible with a large number of other species. The only exceptions are very small fish or species with veil fins – their battles can pluck. Therefore, it is not recommended to add them to guppies, cockerels, or goldfish. Bots get along well with small calm cichlids (apistograms, scalars, etc.). The issue of keeping large cichlids is rather controversial. You can often find information about the impossibility of living together, but the practice of many aquarists proves the opposite. In this case, the size of the fish, the volume of the aquarium, and the number of shelters play a major role. Botia can attack small shrimp and will likely kill all small snails. 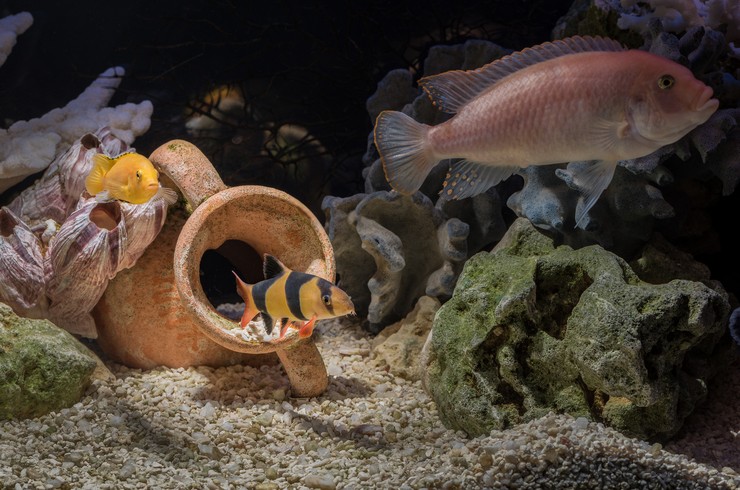 It is better to keep fish in flocks, single individuals often have unmotivated aggression towards neighbors. In the flock, a hierarchy is established, and the fish sort things out only among themselves. Bots get along well with other representatives of loaches (for example, acanthophthalmus).

The most suitable neighbors will be various types of barbs, danios, tetras, rasboras, irises.