The stunning appearance of pearl gourami (Trichopodus leery) rarely leaves anyone indifferent. This is one of the most beautiful aquarium fish. In nature, pearl gourami can be found in low-lying, densely vegetated reservoirs of Malaysia, Indonesia, Thailand, and India. Unfortunately, human economic activity leads to the disappearance of natural fish populations and in many countries, it is listed in the Red Book. A special organ – a labyrinth – allows these fish to survive in conditions of lack of oxygen. Due to its presence, pearl gourami is able to swallow atmospheric air from the surface of the water and use it for breathing. Long stay of fish in containers with a blank lid will quickly lead to their death.

The body of gourami pearl is compressed from the sides and has a silvery-violet color with a large number of scattered spots, very reminiscent of pearls. This feature gave the name to the species. Spots of pearl gourami are also found on fins. The dorsal fin is a striking sexual characteristic: in males, it is elongated towards the tail and pointed, while in the female it is short and rounded. Males have bright red breasts and throats. The color becomes especially bright during the spawning period, every point on the body of the pearl gourami literally “burns”. A dark stripe runs along the entire body of pearl gourami. The pelvic fins, like all members of the Trichopodus family, have evolved into long, thin filaments that allow the fish to feel the surface. The usual size in an aquarium is 10-12 cm. 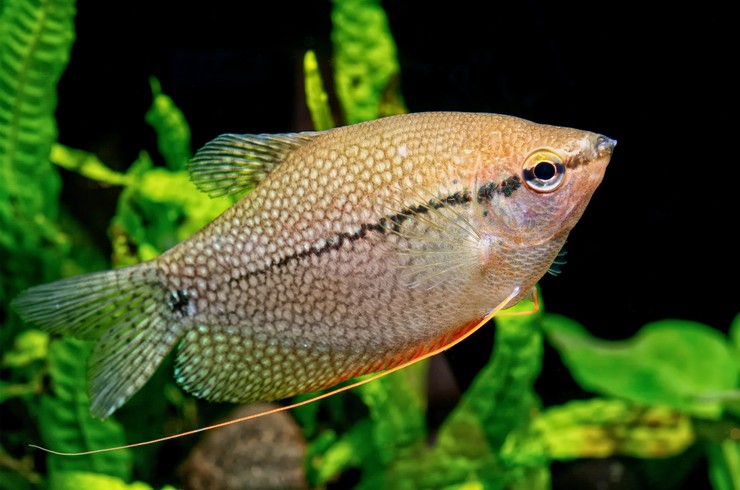 It is necessary to select an aquarium for pearl gourami based on their maximum size. A capacity of 60 liters or more is quite suitable for young individuals, while it is better to keep adult fish in a volume of at least 100 liters. It is better to choose dark soil, with it pearl gourami look more spectacular. Aeration is not required in the aquarium, but it is better to install a filter. Since fish do not like fast flow, the flow of water from the filter must be adjusted so that the water jet is not too strong. It is very important not to let the temperature drop above the surface of the water in the aquarium, as swallowing cold air can make gourami sick. 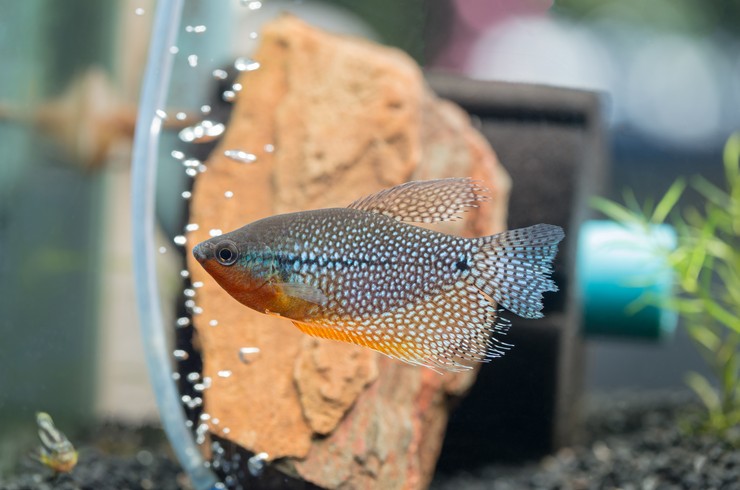 Usually, pearl gourami calmly treats the neighbors in the aquarium, even during the spawning period. Rasbora, neons, tetras, calm scalars will become good neighbors. It is not recommended to plant with active fish such as barbs – they are able to bite off pectoral filamentous fins. It is also better to exclude the closest relatives (for example, marble gourami) from the aquarium, there may be clashes between males. Small shrimps can be considered by fish as food, so it is better not to add them to the aquarium with pearl gourami. 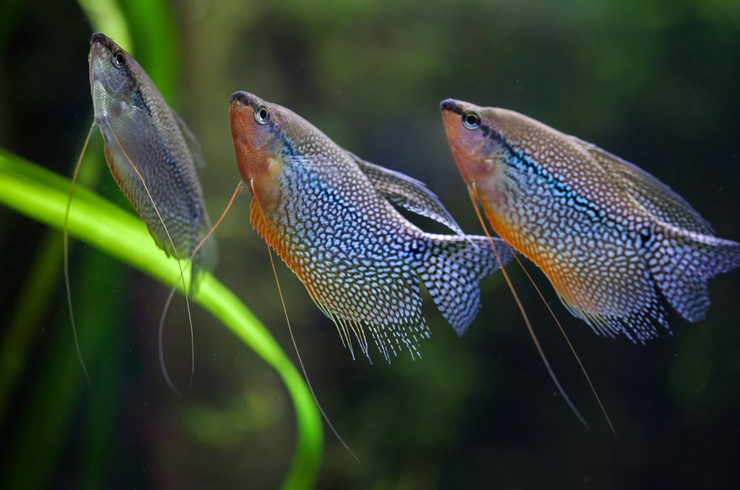 The basis of the diet of pearl gourami in nature is insects and their larvae, as well as zooplankton. Complete dry foods from Tetra are suitable as the main food for the fish in the aquarium. It should be borne in mind that the mouth of the gourami is very small, so the appropriate food must be selected. The following foods are good choices:

It is recommended to feed the fish several times a day in small portions. All feed should be eaten within a few minutes. The high digestibility of Tetra feeds helps to reduce the waste generated by the fish, thereby helping to keep the water clean. In the aquarium, pearl gourami helps fight the parasitic coelenterates, the hydra, which can sting fry with its poisonous tentacles.

Reproduction of pearl gourami is usually not difficult. First of all, you need a suitable spawning tank. Its volume must be at least 50 liters, with a large water surface. Water is poured to a level of 10-13 cm. The temperature must be raised to 28 ° C, pH = 7. It is useful to create in the aquarium several corners of dense plants (Vallisneria, Cryptocoryne, Kabomba), the female can hide in them if she is not yet ready for breeding, and the male is behaving aggressively. Floating plants (eg Riccia) will be of great help to the male when building a nest. The best age for spawning pearl gourami is from 8 to 12 months. Fish older than a year breed very rarely. A few days before the expected spawning, a couple ready to produce offspring actively feeds on high-protein feed. After landing in a spawning aquarium, the male builds a nest from air bubbles, saliva, and plant particles. 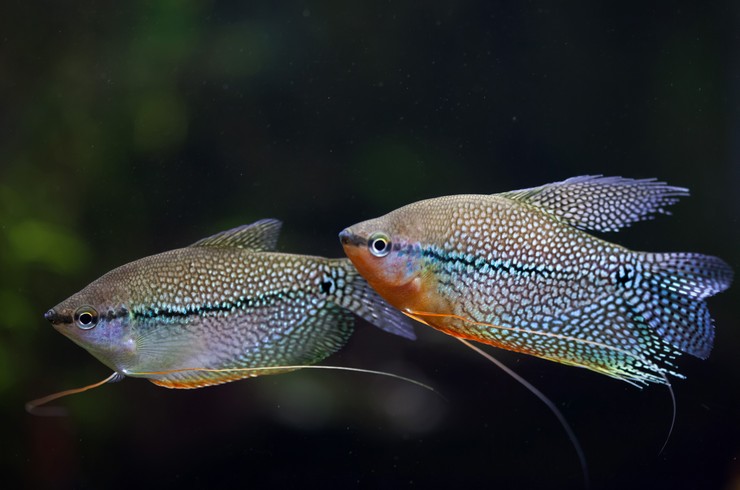 After completion of construction, the female is invited to the nest and spawning begins. The male hugs the female with his body, helping to squeeze out the eggs and pouring milk on them. The eggs are very light; the male collects them and puts them in the nest. After spawning is complete, the female is best planted. Spawning lasts on average about two hours, during which time the female spawns about two hundred eggs. All worries about the development of offspring fall on the father. For the next few days, he does not eat and is only engaged in protecting the nest, where he carefully puts the eggs that fall out. On average, after two days, the first larvae appear, and after another three days, the fry goes into free-swimming. During this period, it is necessary to plant the male, otherwise, the juveniles can be eaten. It is also necessary to lower the water level to 6-8 cm. Infusoria or fine live dust are the starting food for the fry, after which the fish are transferred to larger food. For the first few weeks, it is necessary to arrange weak aeration for the pearl gourami fry, since the labyrinth organ is not formed immediately. As they grow, the water level in the spawning aquarium rises, and the fish themselves are periodically sorted by size.