Burmese is a breed of short-haired cats that appeared in Asia many centuries ago. The ancestor of the breed is considered to be a brown cat, donated to Dr. Joseph Thompson. The animal was brought from the eastern country of Burma. According to some ancient sources, the Burmese breed of cats appeared even earlier than the Siamese, but the official year of its origin is 1934 when Joseph Thompson started breeding Burmese.

In 1938, the first standard for Burmese cats was established. Subsequently, the standard was repeatedly revised and only in 1957 was it finally approved.

The breed became more and more popular, and in 1949 Burmese cats were introduced to England, from where they spread throughout Europe. The British also contributed to the development of the breed, and as a result of the work done, it became possible to breed a blue Burmese cat (previously it was only brown).

Burmese cats have an incredibly beautiful and memorable appearance and hair, reminiscent of satin shimmering under the rays of the sun. The coat is short, soft to the touch, almost no undercoat. Burmese cats are medium in size, weighing from 3 to 5 kg, hind legs are slightly longer than the front ones, the back is straight, the chest is round. The frontal part of the head has smooth curves, the cheeks are well developed, without depressions, a dimple is noticeable at the base of the nose, and a strong chin.

The eyes are large, the ears are high-set, rounded. 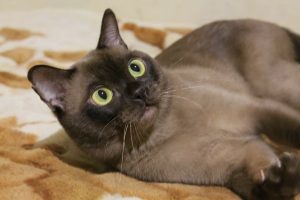 A special gene is responsible for the unusual coloration of these animals.

tortoiseshell – 4 (found only in cats of the European standard),
monochromatic – 6: chocolate; red; purple; brown; smoky; beige.
As a rule, the lower part looks a little lighter than the upper one (back, legs).

In Burmese kittens, a lighter color is allowed.
In cats of blue color, the eyes have a greenish tint, in the rest – from deep yellow to amber. 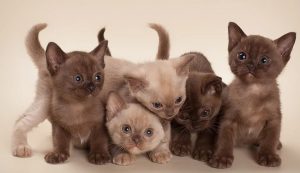 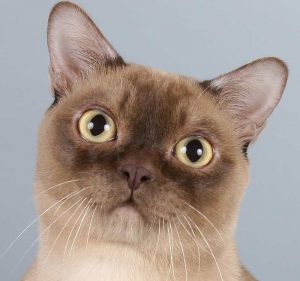 Representatives of this breed have a rounded head filled with a well-developed muzzle. The eyes are round, set wide apart, as are the ears. The body is small in size with well-developed muscles. Legs are of medium length, rounded, well-boned, muscular.

The American Burmese is another breed standard. This mobile cat by nature, she does not tolerate loneliness and not a bit, is not afraid of street noise and cars. When your pet goes for a walk in an open space. 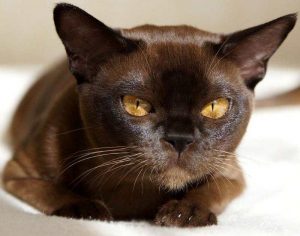 European Burmese is one of the cat breed standards.

The shape of the head resembles a short blunt wedge, the cheekbones are wide.
The eyes are oval “oriental type”, slightly tilted towards the nose.
The ears are medium in size, wide at the base, and rounded at the tips.
European Burmese cats have an elongated, muscular body with regular proportions.
Legs with thin bones, elongated, oval in shape.
The chest is well developed.

The peculiarities of the structure of the eyelids of the European Burmans make them look heavy and serious. But this is a misconception since these animals have an unusually light and docile disposition.

Burmese cats are quite sociable and able to make friends with other pets, even aggressive ones. They also adore children and allow them a lot. The Burmans treat the owner with respect and loyalty. Representatives of the Burmese breed have a satin fur of such a bewitching texture that you want to iron it all the time. Like any cat, Burmese is an excellent stress reliever and soothing pain relief.

These animals, like dogs, simply love to accompany their master wherever he goes. Burmese are distinguished by well-developed natural instincts and high learning ability. They can even bring prey into the house and, out of the kindness of their soul, offer the owner a little “feast”.

With age, the activity of Burmese cats does not fade away. They still love to run, play, and, like dogs, bring various objects. Therefore, cats of the Burmese breed are called “cat-dog”.