The Cairn Terrier is a small working dog originally from Scotland. For a long time, these brave and dexterous dogs were used as watchmen, rodent exterminators, and also for hunting burrowing animals. Modern Cairns are friendly, moderately independent, and intelligent companions. They are known to many for the work “The Wizard of Oz”, in which the illustrator presented the Cairn Terrier as a talking dog Toto. 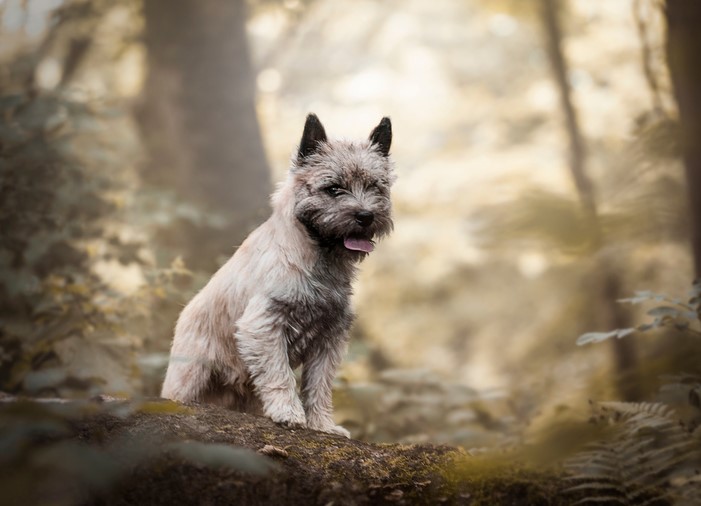 Cairn Terriers are considered one of the oldest Terriers. Their ancestors lived in the Hebrides as early as the 17th century. They may have lived in this area before, but no mention of this has survived. The name “Cairn” comes from a Celtic word that means “rocky area” or “pile of stones.” It is in such conditions that small dogs have lived and worked for centuries.

Until the early 20th century, when the breed was officially recognized by the English Kennel Club, West Highlands and Cairn Terriers had common ancestors. Dogs of different types were often born in the same litter. This explains the confusion about the old names of Scottish Terriers. If the dogs came from the highlands of Scotland, they were called Highland Terriers, but if they lived on the Isle of Skye, they were accordingly Skye Terriers.

Cairn Terriers have never been very popular, but they are mentioned in some literary works, starred in many films and TV series. For example, in the first edition of The Wonderful Wizard of Oz (1899), Baum does not indicate in the text what breed Toto was, but the illustrator V. V. Denslow drew a Cairn Terrier. On television screens, the Cairn Terrier can be seen in the film “Kingsman: The Secret Service”, as well as in the sequel “Kingsman: The Golden Circle”, in the British television series “On the Second Floor, on the First Floor” (1971), in the film “The Uninvited” (1944 ), in the American TV series “Mr. Robot” (2015) and some others.

Under the modern name, Cairn Terrier was first shown at the Craft in London in 1909. Some dogs have been recorded as short-haired Skye Terriers with erect ears. Under this name, they were previously presented at an exhibition in 1860. In 1910 the Cairn was recognized by the Kennel Club of Great Britain. Somewhat earlier, in 1907, white dogs began to be shown separately. Later they became the West Highland White Terrier. 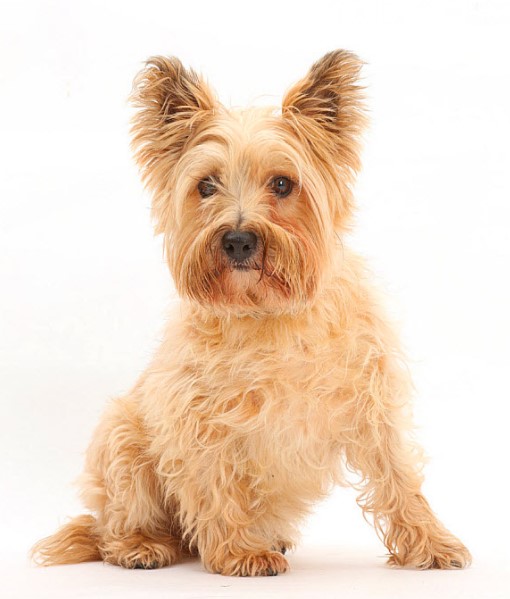 The Cairn Terrier is a small, sturdy dog ​​with a harmonious physique, free movement, and coarse hair of medium length. Height at withers – 28-31 cm, weight – 6.5 kg. The standard also indicates the desired length of the body – 37-39 cm. The Cairn Terrier has some similarities with the Norfolk and Norwich Terriers.

The head is small with a wide forehead and a small hollow between the eyes. The muzzle is pointed but not heavy. The jaws are powerful. The Cairn Terrier is characterized by a fox expression. The stop is smooth but clearly visible. The nose is black. The teeth are strong and meet in a regular scissor bite. The eyes are medium in size, set wide apart, dark in color, very expressive. The ears are triangular in shape, small, set high, set wide apart.

The neck is set high, of moderate length, and strong. The chest is deep and wide. The back is not too long, straight. The loin is flexible and strong. The croup is strong. Forelegs with sloping shoulders and forearms not too short, set parallel. The hind legs have powerful thighs, well-angulated and short metatarsals. Feet with strong nails, rounded. The front legs are slightly larger than the hind legs. The pads are strong and thick. The tail is not long, set high, carried almost vertically.

The coat is thick, double. The awn is of medium length, rough, hard to the touch, straight, maybe slightly wavy. The undercoat is soft, dense, slightly lifts the spine from the body. On the head, bushy hair forms a small mustache and beard. Several colors are allowed: sand, red, gray of various shades (pure black is unacceptable), brindle in which the muzzle is darkened. 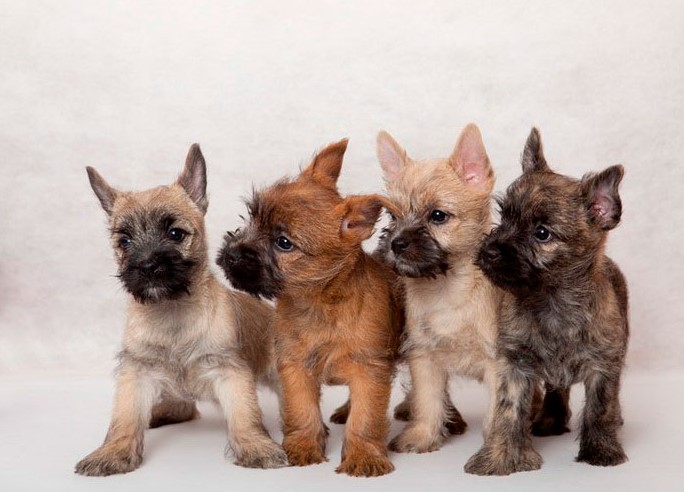 The Cairn Terrier is both externally and in character a typical working terrier, agile, energetic, confident, but not aggressive. At least to people. The hunting instincts that have survived to this day make the Cairn Terrier be partial to small rodents and birds. Brave and vigilant, he does a good job of guarding and may even try to protect the owner and his property, but the ill-wishers are unlikely to be scared by the size of the brave dog.

The Cairn Terrier is a wonderful family companion, cheerful, interesting, upbeat, playful, and friendly. He loves attention and, if not receiving it, can be overly intrusive. He loves all family members very much but is usually selflessly devoted to only one person. Poorly tolerates prolonged loneliness. Cairn Terriers get along well with children, patiently endure noisy companies, but they can periodically avoid too intrusive communication.

As for domestic animals, a properly socialized and trained Cairn Terrier strives for conflict-free cohabitation. It gets along well with cats, however, peaceful coexistence with domestic pets does not apply to street cats. To large dogs, as a rule, he does not bully, with small ones that are suitable in character, he plays with pleasure, although he may prefer the company of the owner. 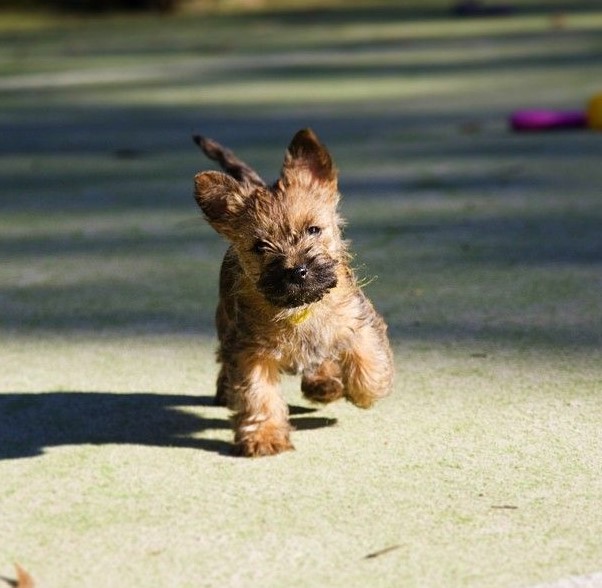 Cairn Terriers shed weakly, which is an undoubted advantage for a house dog. If you bathe it regularly and choose the right detergents, there will be no specific smell. The average frequency of bathing is once every two to three months. The unique coat is not recommended to be combed with a slicker or cut. This practice negatively affects the condition of the coat, which becomes softer, unnatural for the breed. Brushing your Cairn Terrier coat is sufficient once a week. During the period of seasonal molting, it is customary to trim the dog, making it easier to change the coat.

From an early age, it is advisable to teach the Cairn Terrier to brush its teeth and perform the procedure at least two to three times a week. This will help prevent diseases of the gums and teeth in adulthood. The claws are cut once a month. If the dog does not grind them down on its own, which necessarily happens on solid ground with regular walking. Once a week, if necessary, clean the ears, examine the skin. Discharge from the eyes is removed as it appears. Profuse lacrimation is not typical for the breed. 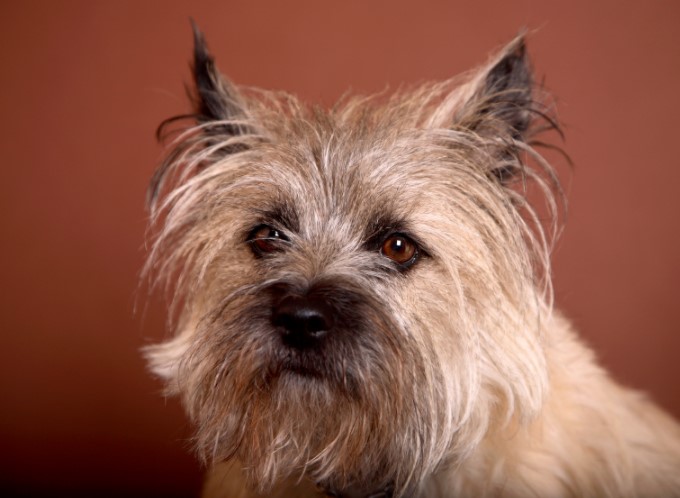 Breeders and veterinarians have identified a number of diseases in the breed that are typical of the breed. Some of them are hereditary, others arise as a result of nonspecific factors (trauma, toxins, infections).

The life expectancy of a Cairn Terrier that does not suffer from hereditary ailments can reach 15-16 years. On average, it is 12 years. To maintain the health of the dog, it is important to follow standard preventive procedures (vaccination, treatment against external and internal parasites), as well as to undergo regular medical examinations.