Large crustaceans are increasingly becoming desirable pets in hobbyist aquariums. This is due to the fact that these animals are unpretentious in care and feeding, while they are distinguished by high decorative qualities and amusing forms of behavior. The undoubted zest in the content of these exotic residents is present. Florida red crayfish is a frequent choice for budding crayfish breeders. Read about how to create comfortable conditions for him in a home aquarium in our article.

California red crayfish (Procambarus clarkii) is a freshwater crustacean from the order of Decapod crayfish. Also known as red Florida and Vietnamese crayfish. This species is a typical inhabitant of the swamps of the southeast of North America, which in the 70s of the XX century began to be actively kept at home.

These crustaceans will truly make great aquarium pets. You will not have any problems with their maintenance and feeding. And they, in turn, will give more than one hour of fascinating observations of their lives. Do not forget that this is also a very bright crayfish the most popular individuals have a deep red body color. It is simply impossible not to pay attention to such a resident of the aquarium.

Surprising fact: the color of crayfish is directly dependent on feeding. For example, if the diet is dominated by carotenoids, then we get a bright red individual. But if we offer him mussels, our crayfish will sooner or later turn blue.

California red crayfish is a relatively small crustacean. In nature, they can grow up to 20 cm, but in an aquarium, their size rarely exceeds 10-12 cm.

The body consists of the cephalothorax and abdomen, which ends in a caudal fin. Walking legs are attached to the first section, the last pair is modified into massive claws. The senses are small eyes and sensitive antennae of different lengths. The abdomen consists of movable segments, and small swimming legs – pleopods – are located below. 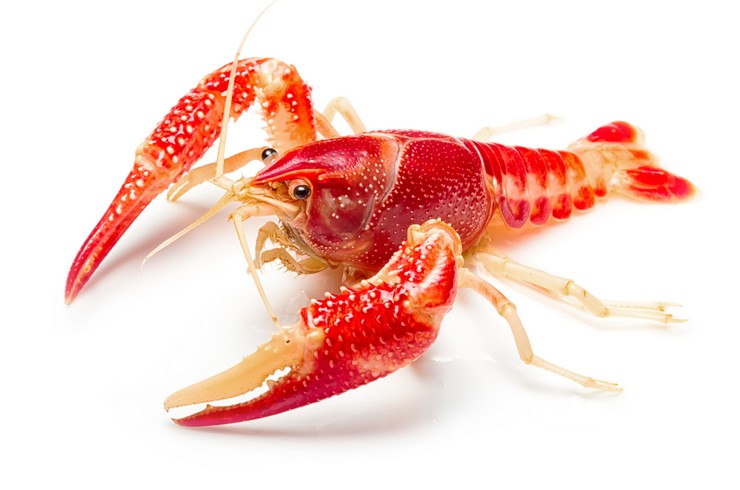 The color of adult crayfish is quite variable and can vary from blue-violet to dark brown. The composition of the food has a great influence on the color. Small yellow spines are scattered over the body of blue individuals, while in red ones they are almost white. On the claws, characteristic spots are found, the color of which can also change.

Life expectancy ranges from 3 to 7 years.

In the wild, red crayfish can be found in northern Mexico and southeastern North America. The species was artificially acclimatized in Europe, Asia, Japan. In some areas, it displaced crayfish, more sensitive to water quality.

Inhabits marshy areas – ponds, backwaters, lakes with a slow current. Drought can survive by digging into a deep hole. 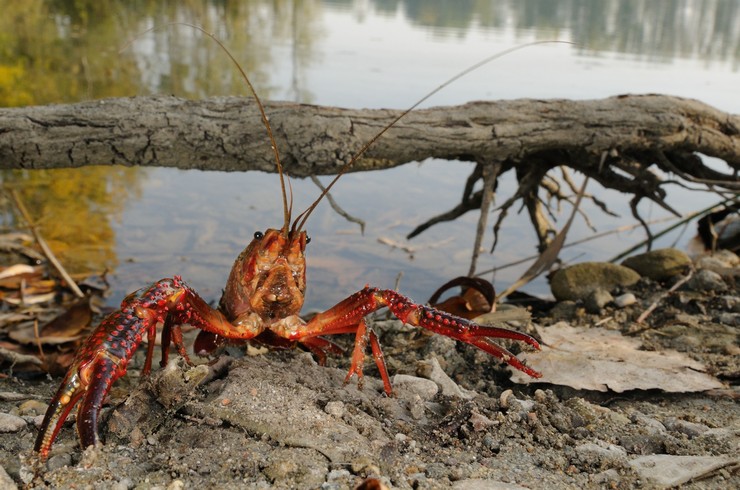 Red Florida crayfish are best kept singly or in pairs. At a young age, it is allowed to be kept in small groups, but the likelihood of conflicts in such an environment increases dramatically.

The minimum recommended volume for one crayfish is 70 liters. The bottom area is most important because this is where crayfish spend most of their life. At the bottom of the aquarium, a soil of small or medium pebbles is laid. It is not recommended to use sand, since red Californian crayfish are very fond of digging up the soil, which will raise a lot of dirt from the sand.

A next important point is the large number of shelters. Crayfish love to hide in them, especially during the molting period, when animals become vulnerable. You can use driftwood, coconut halves, or ceramic pots. It is recommended to let the crayfish get to the surface of the water. To do this, use tall artificial plants or driftwood. However, in this case, do not forget to use a lid or coverslip, and cover the wide technological holes, if any, with something to prevent crayfish from escaping from the aquarium. 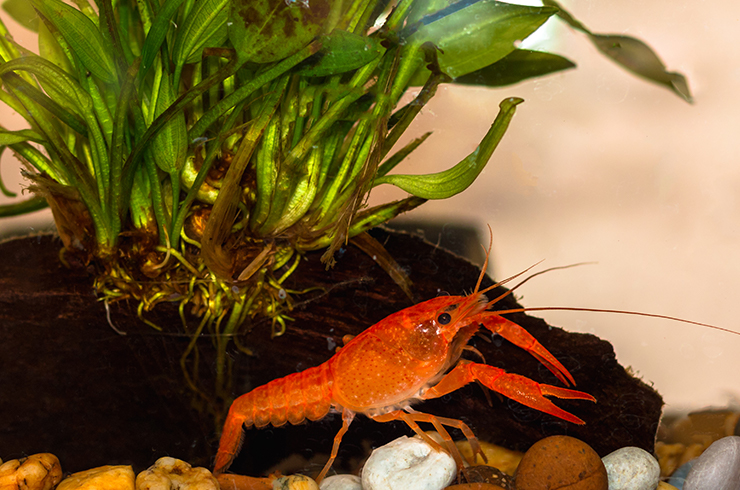 The aquarium should be equipped with a productive filter but without a strong current. Do not forget about the round-the-clock aeration of the aquarium, especially during the warmer months.

It is very important to keep the crayfish in moderately warm water as too high temperatures will shorten their lifespan. Hardness should be medium to high. In too soft water, Californian red crayfish will have problems forming their shells.

Once a week, a change of 20% of the water in the aquarium with freshwater is required. It is best prepared with Tetra Crusta AquaSafe Conditioner, which removes crayfish-causing compounds such as copper and chlorine from the water.

For living plants, it is best to use hard-leaved (Echinodorus, Anubias) and floating species (Riccia, Hornwort, Pistia). Crayfish will gladly cut and eat delicate leaves of many plant species. It is advisable to enclose the Echinodorus with large stones so that crayfish would not have the opportunity to dig them up. 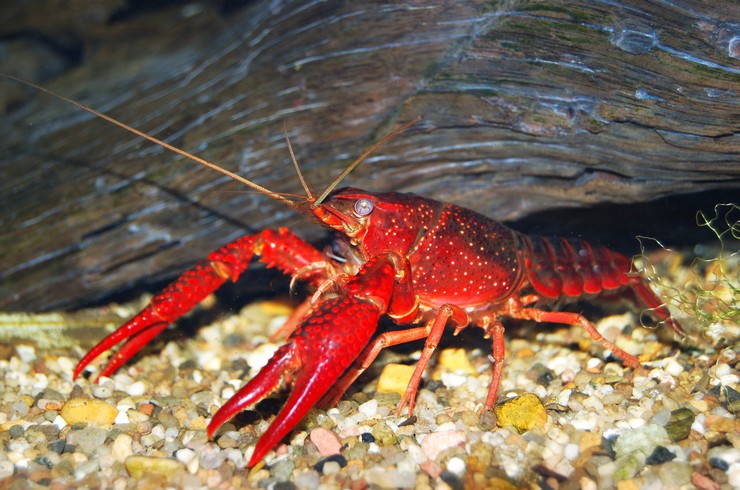 With a certain frequency, the crayfish in the aquarium molt – shedding the old hardcover, because it limits the growth of the animal. After molting, the integument remains soft for some time, and the crayfish can grow in size. After molting, crustaceans seek to hide away from prying eyes, because until the new shell hardens, they are in serious danger: they can be attacked by fish or their own relatives. The frequency of molting depends on the abundance of feeding and the age of the crayfish. The thrown-off shell can not be thrown out of the aquarium, it is disposed of by eating the crayfish itself.

California red crayfish can be kept in a shared fish tank. A well-fed animal will never attack them. However, being hungry, he can grab a small or overly slow fish. Do not plant crayfish in an aquarium with species that have veil fins.

On the other hand, fish are more active in eating food, so you need to make sure that the Californian crayfish gets enough food. Fish can also attack individuals that have just shed their cover, so do not forget about shelters in the aquarium.

Of the possible neighbors, you should pay attention to mollies, platies, barbs, gourami. Keeping with Malawian cichlids is also allowed, but it is worth controlling the behavior of fish during crustacean molting.