When breeding the Canadian Sphynx breed, a natural mutation was recorded, leading to a lack of hair. When you first meet the cats of the Canadian Sphynx, you will forever be conquered by the wise alien eyes of this creature and the hot suede nudity of its body.

At the very first acquaintance with the cats of the Canadian Sphynx, you will forever be conquered by the wise alien eyes of this creature and the hot suede skin of a kitten. 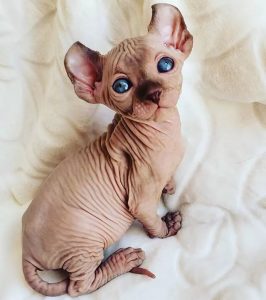 Representatives of the Canadian Sphynx breed are strong and muscular animals.

The head is wedge-shaped, of medium size. The length was slightly more than width, protruding cheekbones. The forehead is flat (somewhat convex is allowed), with 7–9 folds. The nose is short, the bridge of the nose is wide. The chin is well defined.

The eyes are deep-set, large and oval, amber in color.
The ears are large, wide at the base, widely spaced on the sides of the head. The tips rounded. The ears could be slightly pubescent.
At the base is an “earmuff”.

The neck is muscular and long. The chest is wide. The body is thin-boned, elongated, muscular, with a rounded chest and croup. The shoulders and sides are powerful. The abdomen is rounded. The limbs are thin, muscular, widely spaced, with long toes.

Sphynx kittens are born with rare wrinkled hair. Their hair falls out with age.

The tail is long, thin, mobile, flexible, straight, sometimes pubescent in the last third or ending in a tassel.

The skin is thin, with folds. The pubescence may persist on the tips (in the presence of a brush at the end of the tail). 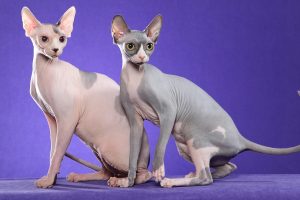 The Canadian Sphynx breed was first presented in 1984 at an exhibition in Paris.

Mentions of cats devoid of hair can be found in ancient manuscripts of antiquity. And, judging by the surviving drawings in the temples of the Aztecs, it is likely that the Indians of South America also knew the appearance of a naked cat, which, unfortunately, has not survived to this day.

Although more recently, in the 30s of the twentieth century, hairless cats of the Mexican Hairless breed took part in exhibitions on the American continent. Unfortunately, this Mexican cat could not survive to this day.

Nevertheless, isolated cases of the appearance of the hairless gene at the birth of kittens were registered all over the world, but special breeding work to create a new breed of hairless cats began only in the 60s of the twentieth century.

The impetus for the start of the planned breeding work, as always, was accidental. In 1966, a normal longhaired kitten, a hairless kitten named Prun, was born in Ontario, Canada. Later, this cat became the main supplier of the hairless gene for other litters of the same cat, and then other cats. 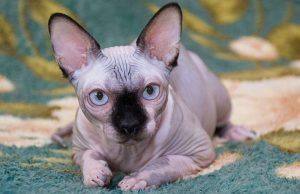 The almost hopeless situation was again corrected by accident. Three more hairless kittens were accidentally found in Toronto, Canada. And then in the state of Minnesota in the United States in 1975, a magnificent bald cat was found, which received the funny named Epidermis. A year later, a bald cat was born there. All these animals brought to the breed an influx of “new” blood, which is so necessary for scientists.

Subsequently, the Canadian Sphynx was crossed with the Devon Rex breed (to somehow consolidate the transmission of the “bald” gene). True, there were problems here too. This selection led to a change in the skin condition of newborn sphinxes. The famous cute skin folds and wrinkles that adorn these cats so wonderfully have disappeared or become less common. The most wrinkled representatives of the breed are, as a rule, the distant descendants of their ancestor, the cat Epidermis (this is the most elite class of the breed).

However, at present, there are cases of the birth of hairless kittens, which can be used for mating, so breeders and breeders do not lose hope to correct the situation.

The Sphynx is a very sociable and unpretentious cat. It is enough to look at it once to understand that this fragile and affectionate animal, despite its desire, is not capable of harming anyone.

Please note that pets of the Canadian Sphynx breed are very sensitive and easily offended, so you should not shout at them, much less punish them. Otherwise, the sphinx may be offended, refuse to eat, and get sick.

Sphynxes cannot be called too active animals. Unlike many other cat breeds, they prefer to play in a warm and cozy corner. Most likely, this behavior is because due to the lack of a fur coat, sphinxes often catch colds.

Despite its touchy nature, all representatives of this breed get along well with other pets, including dogs.

Canadian Sphynxes are unpretentious in food, and with appetite, they eat everything that the owner offers them.

Cats of this breed are extraordinarily quick-witted, they do not need to be taught or trained: it is enough to show them “what, where, and why” once, and they will understand everything. 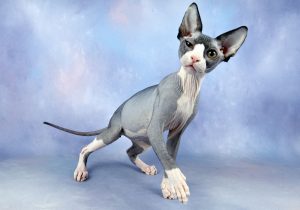 Before buying a sphynx, the owner needs to seriously think about whether he can devote enough time to the pet every day and whether he has enough patience to take care of the cat.
Sphynxes are primarily original show cats. At the same time, they do not require special care: they do not need a comb, brush, and scissors, they do not give the owner the trouble of molting.