Spain is considered the “first” homeland of the English Pointer, although at that time its ancestors were slightly taller and larger than the modern representatives of this breed. Then this clever dog visited Italy and France, where he “refined” a little and became more compact, which undoubtedly helped him to become faster and more nimble in hunting game birds. And at the beginning of the 18th century, he finally reached England, where the breed was finally formed, and the newly minted English gentleman quickly gained fame as an outstanding hunter. 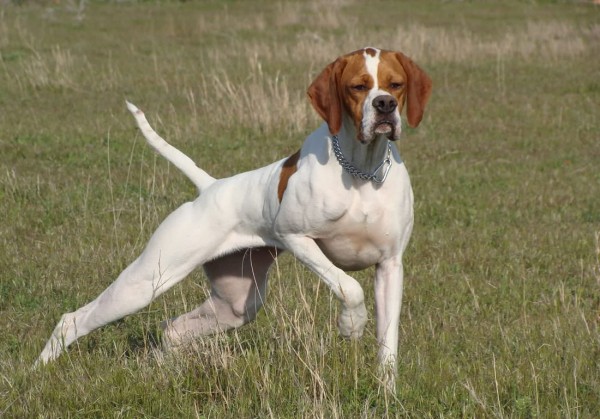 In Russia, the first representatives of this breed appeared in the 30s – 40s of the 19th century. The English Pointer is a combustible mixture of Foxhound, Greyhound, Newfoundland, English Setter, Bloodhound, Italian and French marriages, and even the English Bulldog. From all his ancestors, he took all the best, and now the modern pointer is a combination of beauty and intelligence, flowing grace and swift strength, balanced temperament, and unrestrained passion for hunting. This wonderful creature has a telling name: in English “pointer” means “pointer”: after all, this dog with excellent instinct, having found the game, stands up and stands motionless, pointing to the owner to the place where the cunning animal or nimble bird is hiding. His exquisite hunting method resembles a graceful dance: he sometimes makes smooth and energetic springy jumps, then suddenly stops and, after a little reflection, starts to move again. When the Pointer makes a stance, the base of his ears is slightly raised and his tail is horizontal. This tireless short and long-distance runner can be trained to hunt just about any small game. If the dog gets wet during the hunt, be sure to dry it as soon as you come home, otherwise, he runs the risk of catching a cold. The English Pointer has an elegant appearance and a harmoniously developed physique. He always carries his head high, he has a slightly upturned elongated muzzle, drooping triangular ears with rounded ends, muscular shoulders and limbs, and a flexible, resilient, and high set tail. The height at the withers in these dogs is from 54 to 69 cm, weight is from 20 to 30 kg. Pointer’s coat is tough, short, and glossy, the color is very diverse: black, white, reddish-white, lemon-white, liver-white, black-and-white, spotted or speckled, there are also various tricolor combinations. Despite the fact that the hunting instinct is strongly expressed in the pointer from early childhood, you should start full-fledged training when the dog is a little older. And to satisfy the hunting instinct of a lively puppy, it will be enough to play the game “bring a toy” with him. Another important point in the upbringing of a pointer: from a very young age, train your pet to communicate with people and be in public places, otherwise, he will grow up shy and shy and will even react to the noise of a car. This noble dog with a sensitive nature has very expressive and intelligent eyes: when he looks at you with his gentle and gentle gaze, it seems that this dog thinks just like a person. The English Pointer is very attached to the owner, besides, he perfectly knows how to “read” human emotions and moods, so he will not bother you if he sees that you are tired and you have no time for communication. Poynter is completely non-aggressive and very friendly, but in a dangerous situation when you need to stand up for yourself or for the owner, he will forget about nobility and good manners and boldly rush to the offender. This four-legged hunter with a lively temperament is very hardworking and does his best at “work”, but at home he allows himself to have a proper rest and recuperate. In a city apartment, your pointer may get bored, so if you do not have the opportunity to live outside the city, more often please your pet with forays into nature and arrange dynamic jogging or impromptu hunting with him.