Cane Corso or Italian Mastiff is the national pride of Italian dog breeding. During their long history, dogs of this breed were used in almost all possible spheres, they were shepherds, hunters, and guards. They are very loyal to their family, and their main advantage is the ability to distinguish between real danger and friendly interference in their territory. 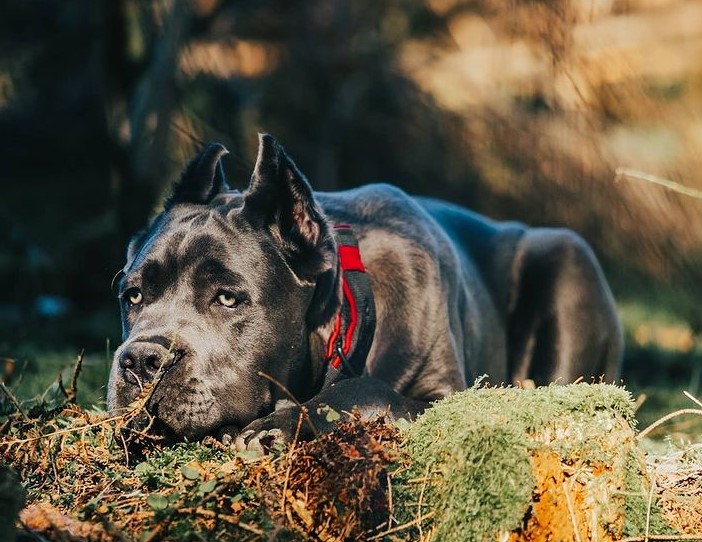 The Cane Corso breed, like a phoenix, was revived from the ashes at a time when it was already on the verge of extinction, despite the fact that its history goes back several centuries. The ancestors of the breed are presumably the ancient Roman Molossian Great Danes. In the past, the Cane Corso represented one of their local types and did not stand out as a separate breed. The first mention of these dogs dates back to 1238 when his image appeared on the coat of arms of the aristocratic family “de Corse”. In other sources, these dogs, one way or another, are associated with hunting, guarding, or grazing.

After the Second World War, the number of Cane Corso declined sharply, which was associated with a noticeable decrease in the number of livestock and expensive keeping of dogs. The breed was on the verge of extinction but was restored by a group of enthusiasts who were able to find single purebred specimens.

Interest in the Cane Corso was aroused by a certain Breber, who studied the traditions and history of the Italian village, where the dog was an everyday part of the life of the villagers. In 1976, he published an article that pushed animal lovers to organize a society of breed lovers, and he himself joined it. In the history of this society, there were many internal disputes and even conflicts regarding the importance of the Italian Mastiff. But the efforts of the enthusiasts were not in vain. Members of the society have achieved a lot. They invited renowned breeders and dog experts to their meetings. As a result, the Cane Corso breed was not only officially recognized, but also made extremely popular.

Unfortunately, the members of the society were not ready for the sudden outbreak of interest around the Italian Mastiff. Dogs began to be bred by people far from the goal – to preserve the purity of the breed. The priority was the number of puppies, so different representatives of the breed were allowed to mate, sometimes far from the best. And, on the contrary, the best ones often turned out to be unclaimed. As a result, the breed, revived with such difficulty, began to lose its best qualities due to mass production. The dogs received official recognition only in 1983, and the breed standard was registered in 1996. 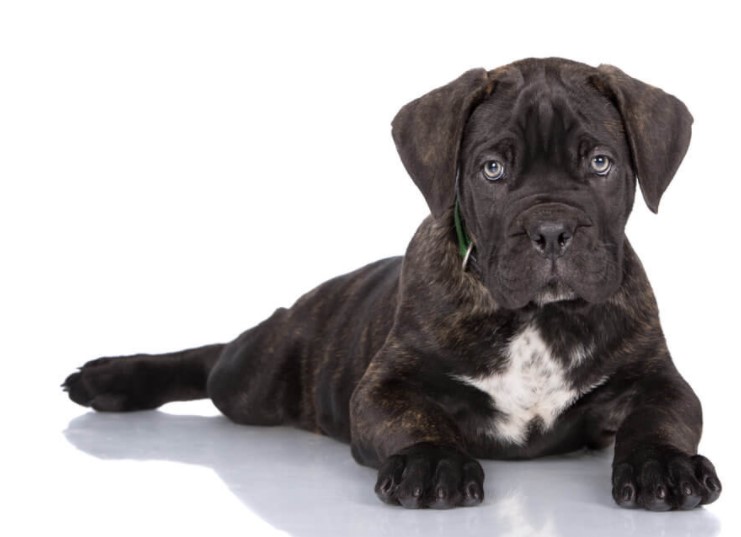 Dogs of the Cane Corso breed are distinguished by a very strong constitution, but not devoid of elegance. They have well-developed muscles, strong bones. The head is of a typical Molossian type, pronounced superciliary arches, wide cheekbones, the frontal groove and a deep transition from the forehead to the nose are clearly visible. The eyes are oval, set straight and slightly protruding, always dark in color. The ears are set high if not cropped, triangular in shape, drooping.

The Cane Corso is characterized by an elongated body with a length exceeding the height at the withers. The average height for males at the withers is 65 cm and for females 62 cm. The average weight of animals is 45 kg. The chest is voluminous and deep, the croup is slightly sloping. The tail is thickened at the base, never rising vertically. Up to 4 vertebrae of a call can be stopped. The coat is short, very thick, and shiny, the change of undercoat is seasonal. The color is allowed black, shades of gray, red, and brindle. 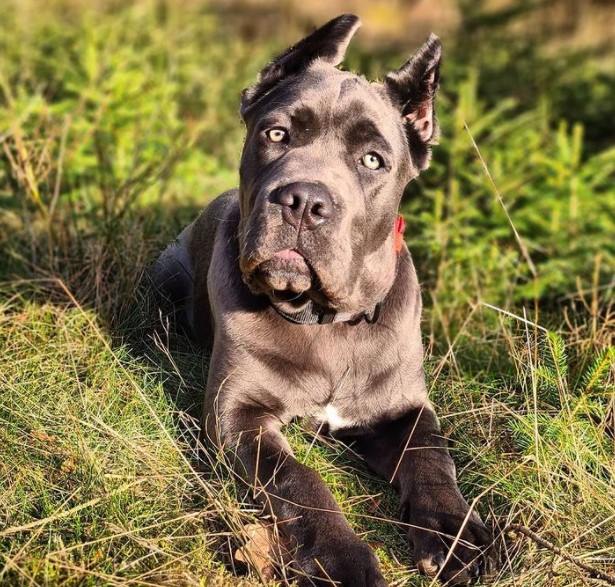 Representatives of the breed have a calm and balanced character. Their main feature is the ability to intuitively distinguish between friends and enemies. This dog will never attack or bite without reason, but if it senses an invasion of its territory, it will act at its own discretion. Italian Mastiffs are very intelligent and intelligent, this nobility is surprisingly combined with a strong constitution. They will never demand attention or bark for no reason. They are very attached to the family, especially children. Loyal to their master, acutely experiencing separation.

Cane Corso cannot be bribed with a tidbit and you cannot distract him from his main duty – to protect the family. This pet won’t stop when it comes to protecting its borders and those it loves. Due to the increased loyalty and affection that is formed from puppyhood, the dog is very difficult to part with the owner. If you want to buy an Italian Mastiff, think well. Do not give in to the momentary impulse. Cane Corso can fall in love only once, and if you betray him, disappointed in raising a dog, you will ruin the dog’s life forever.

Cane Corso – dogs with an iron character and will, very emotional. Puppies require the constant presence of the owner, with whom they must be in an equal relationship. Getting along with other animals depends on the disposition of the dog and neighbors, but, as a rule, there are no problems. They treat children exceptionally well, only a dog will allow a child to do whatever he wants, never knocks him off his feet, and does not frighten him, he is very worried when he hears a child crying. They bark the Cane Corso only in case of a real threat. 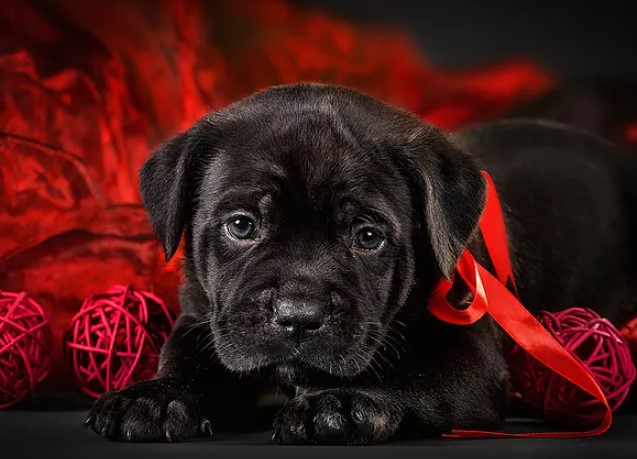 Caring for the Cane Corso determines a lot. At stake is not only the health of the pet but also the suitability of the animal for further breeding. Even an excellent pedigree puppy can become unsuitable for a pedigree breed and an exhibition career if the owner does not take care of his maintenance and care.

First of all, choose a place for the future habitat of the Italian Mastiff. This is an important factor because earlier dogs lived in villages and they considered the yard as their territory. Remnants of the past make themselves felt in the realities of a city apartment. Therefore, if from an early age you do not teach an animal a place, then it will not be easy to wean him from power. Cane Corso is a prestigious dog breed. Therefore, many people do not pay attention to the conventional wisdom that a large animal can only live in a private house and an Italian Mastiff in a city apartment is not uncommon.

These dogs do not require special care. They are combed out only during intense seasonal molting. Dogs should be bathed no more than twice a year and only when a specific smell appears. Ears are periodically examined, claws are trimmed if necessary. Give your dog special treats and toys to help prevent tartar. 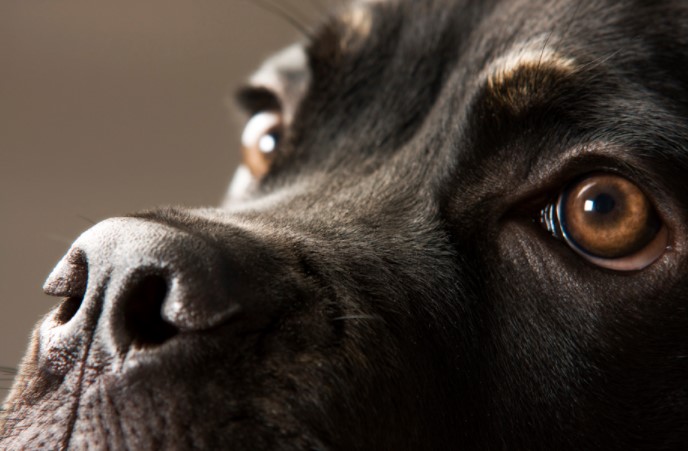 The problem most often faced by owners Cane Corso is dysplasia of the hip joints, which is why it is not recommended to take dogs under 18 months of age for jogging and do not allow them to go down the stairs on their own. Also, the breed is prone to flatulence, allergies, epilepsy, and thyroid diseases. Eversion or volvulus of the eyelids and a third eyelid adenoma, also known as cherry eye, are sometimes seen.