New species are regularly discovered in nature, which instantly attracts the attention of aquarists. Enthusiasts are not deterred even by the high cost and complexity of the content. Such a fate did not pass by the cardinal’s shrimp from the island of Sulawesi. Discovered just over 10 years ago, this small but extraordinarily vibrant crustacean is increasingly found in hobbyist aquariums, even though it is difficult to care for.

Sulawesi cardinal shrimp (Caridina dinner) is a small freshwater crustacean found exclusively in Lake Matano (Indonesia). It appeared in aquarium culture in the second half of the 2000s. Possesses high decorative qualities: the color of the shrimp is deep red with white dots, in color, it resembles the mantle of Catholic cardinals, for which the species got its name.

Keeping cardinals at home is not an easy task. Shrimp require reconstitution of the composition and parameters of water, which is almost identical to natural ones, therefore, keeping individuals of this species is not recommended without careful preparation and experience, given that their cost on the market is still extremely high. 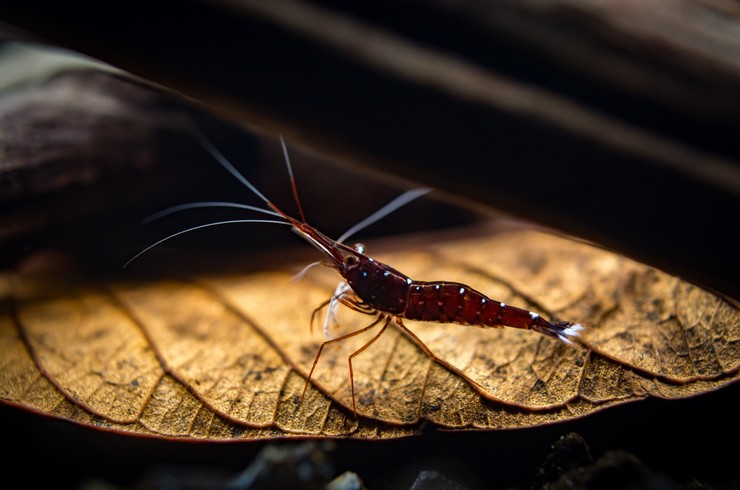 Cardinals shrimp are very active. They rarely hide, almost always sit on stones or the bottom, constantly collecting food. An interesting observation was made by aquarists: if you keep cardinals together with Sulawesian snails, then the shrimps become even more active, they often climb onto the shell of gastropods and eat algae from them.

Unfortunately, the species are currently endangered. There are very few of these crustaceans left in nature. The death is associated, first of all, with human economic activities: nickel mining, the flow of household waste into the lake, artificial introduction of carp, and Nile perch shrimp into the habitat.

By the shape of the body of the shrimp, the cardinals are not much different from their relatives: there are also two sections (cephalothorax and abdomen), five pairs of walking limbs, small abdominal legs, a horizontal lobe of the tail, etc. The key feature is color. The body is red in color, which, however, varies from light to maroon. It should be noted that the intensity of the color does not in any way indicate the age, sex, or condition of the animal. Scattered all over the body are small white dots that contrast perfectly with the body color. Sometimes a bluish outline can be observed around them. 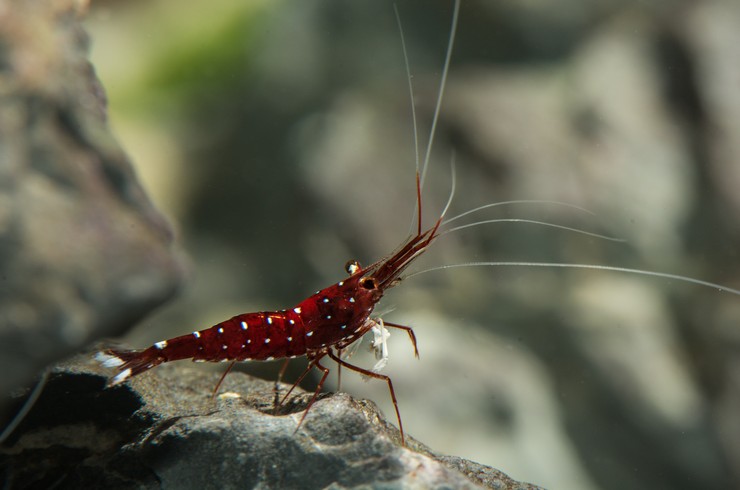 All limbs of the cardinal shrimp are red, except for the forelimbs, which are colored white. It is very funny to watch the process of feeding a shrimp, while its forelimbs are in constant motion.

Cardinals shrimp are endemic to Lake Matano located in Indonesia (Sulawesi Island). This body of water is very ancient; according to forecasts of some scientists, its age maybe millions of years. The depth in some parts of the lake reaches 590 meters. 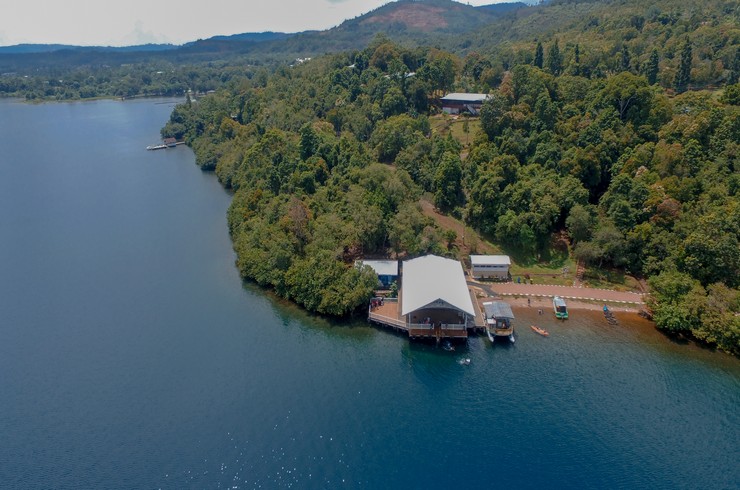 Cardinals shrimp are miniature crustaceans, so they do not require large aquariums to run. The minimum recommended volume for a dozen shrimp is 10 liters. However, given the general exactingness of these fish to constant environmental conditions, it is better to stop at aquariums of 30 liters or more, because it is much easier to maintain the biological balance in them.

It is best to use a large number of stones and snags as decoration. They not only serve as an excellent refuge but are also a place of accumulation of algae. On such “pastures” the cardinals will spend most of their time.

The most important thing when keeping Sulawesian cardinals shrimp is comfortable water parameters. These crustaceans prefer alkaline water (GH = 7) with a pH of at least 7. The suitable temperature is in the range of 26-29 °, so it is worth taking care of the thermostat. Prolonged storage at lower temperatures can lead to the death of shrimp. 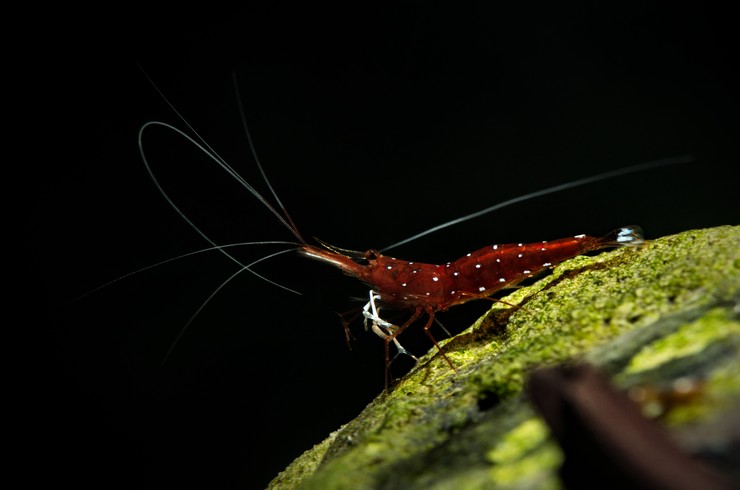 The practice of keeping cardinals shrimp has unfortunately shown that simply maintaining the GH and pH parameters will not be enough. In normal water, shrimp will have a shortened life cycle and survival is difficult to predict. In order to provide the shrimps with the most comfortable conditions, osmotic water and a complex of special salts developed specifically for Sulawesi shrimps are usually used in the process of water treatment.

The water in Lake Matano is crystal clear. Therefore, it is important to install a filter of suitable power in the aquarium. It is better to use air-lift filters.

To maintain the high quality of water, it is necessary to change up to 20% of the volume of the aquarium once a week.

Sulawesi cardinals shrimp are best kept in a species aquarium for several reasons:

In the diet of shrimp, cardinals are completely unpretentious. The basis of their diet is algal fouling on rocks and decorations. But the opinion that shrimps will find their own food is not entirely correct.

For well-being and full growth, feed the cardinals once a day with quality dry shrimp food, such as sticks or Tetra Crusta pellets.

It is important to ensure that the feed is completely eaten by the pets within 2-3 hours. Excess feed, decomposing, can lead to changes in water parameters. Try not to overfeed the cardinals, and give them a fasting day once a week. 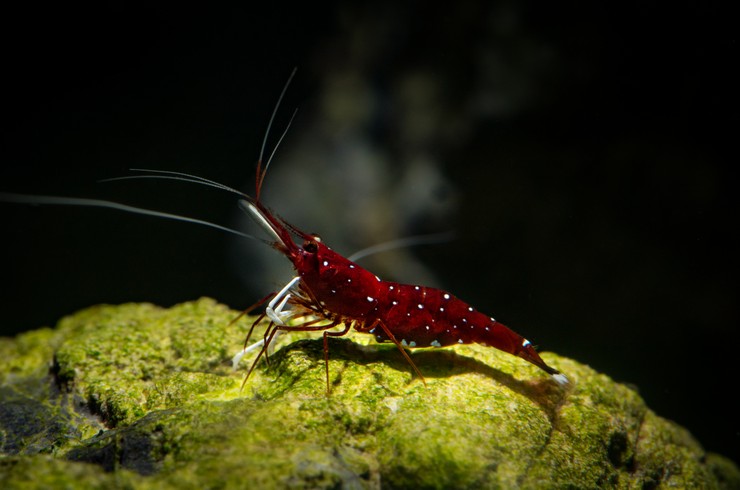 It is quite possible to breed cardinals shrimp at home, since the entire reproduction process takes place exclusively in freshwater, and not larvae, but fully formed shrimps, appear from ripe eggs.

Sexual dimorphism in cardinals is not pronounced; therefore, it is rather difficult to distinguish a male from a female. But given that shrimp are usually kept in schools, both males and females will certainly come across in the group.

The fecundity of the female is 10-15 eggs. Incubation takes no more than a month. Young individuals are born from eggs, similar to adults, and having the same color. The growth rate of the cardinal shrimp is quite high.