Crystal red and black shrimp are the most common crustaceans after cherries. Their history goes back a little more than 20 years, but during this time they managed to spread throughout the world, winning the hearts of aquarists. Keeping shrimp at home has a number of features. We will talk about them in our article.

Crystal shrimp is a breeding form of the Caridina cantonensis shrimp found in China and Japan. Currently, Crystal Red Shrimp and Crystal Black Shrimp are popular. Their distinctive feature is the alternation of red (black) and white stripes in color. Officially, the name “Crystal” is assigned precisely to the red uniform, but out of habit, it has passed on to the black relative. 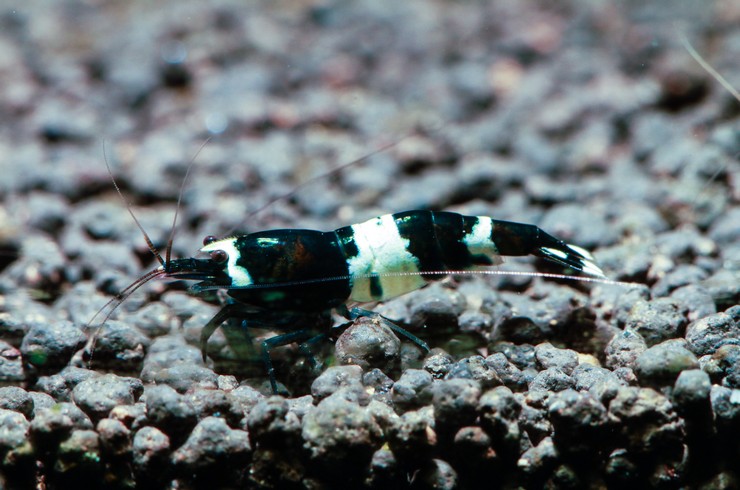 After the appearance of the breed in 1996, a real boom began all over the world – it spread first in Asia, and then in the USA and Europe.

The content of crystal shrimp has its own characteristics, in general, they are quite demanding, especially when it comes to “purebred” representatives.

Crystal shrimp have a body shape characteristic of most shrimp. It consists of the cephalothorax and tail. The shrimp are covered with a strong chitin shell, which acts as the outer skeleton. They have five pairs of walking legs, the thoracic limbs are modified in the jaw, which is involved in retaining food and delivering it to the mouth. The tail has small swimming legs. In females, they serve as an attachment point for eggs; in males, one of the pairs has turned into a sexual organ. Like other shrimps, crystals have several pairs of sensitive antennae and movable eyes on the stems.

The size of adults is 2.5-3 cm. Females are larger than males. 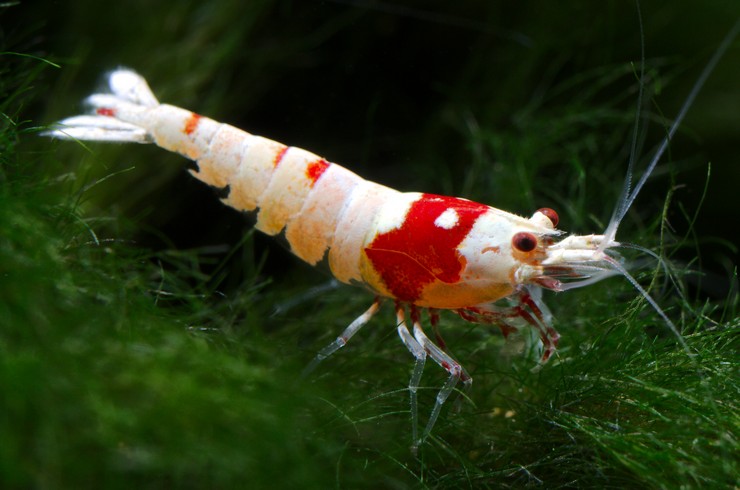 The main distinguishing feature of crystals is their color. It is a distinct alternation of red/black and white stripes. Due to a large number of crystal shrimp variations, breed standards have been created, where each shrimp is assigned one of the classes. It depends primarily on the area of the white areas and the overall color saturation. In lower-class shrimp, areas of black or red are very pale. The color of the tail, abdomen, cephalothorax is also taken into account.

The Kristall shrimp breed has its own author, whose name is Hisayasu Suzuki. This Japanese aquarist was engaged in breeding bee shrimp – one of the forms of the already known to us Caridina cantonensis, which had a black-striped color. In 1993, a breeder noticed a red-striped shape in one of the aquariums, although their color was not very bright. Through crossing and selection, the Japanese finally managed to get individuals with a persistent red coloration. He published the results of his work in 1996, which is considered the date of the breed’s creation.

At present, shrimps of this breed are widespread throughout the world and are only slightly inferior to the well-known cherry shrimps. Individual specimens of crystal shrimp with a rare or unusual color can cost up to several thousand dollars. 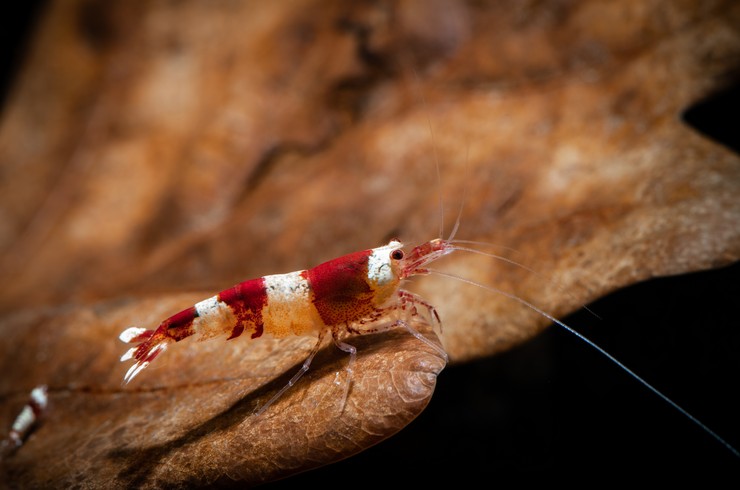 Crystal shrimp as they are known to aquarists – vibrant and rich – are not found in the wild. Wild individuals of Caridina cantonensis live in southern China, on about. Taiwan, Japan. They prefer small slow-flowing reservoirs with acidic water, which is formed due to the constant decomposition of falling leaves and other organic matter. Such water prevents the development of pathogenic microorganisms – bacteria, viruses, fungi.

Shrimp are hiding among thickets of plants and in various shelters made of snags.

Growing crystal shrimp is recommended for experienced aquarists, as these crustaceans require certain conditions. The higher class shrimp are especially sensitive to changes in the aquarium.

To keep the crystal shrimp, you need a very small aquarium – 10 liters will be enough. It’s good if the bottom area is maximized.

Any small neutral substrate, such as Tetra ActiveSubstrate, can be used as a primer. Mangrove driftwood and stones are used for decoration. It is recommended to have more live plants in the crystal shrimp aquarium. It is better to give preference to undersized species. Ferns, mosses, pistia, hornwort, various ground cover plants (helianthus, glossostigma, etc.) are well suited. You need to be more careful with anubias: any manipulations associated with cutting leaves or rhizomes are best done outside the shrimp. Otherwise, shrimp death may occur. 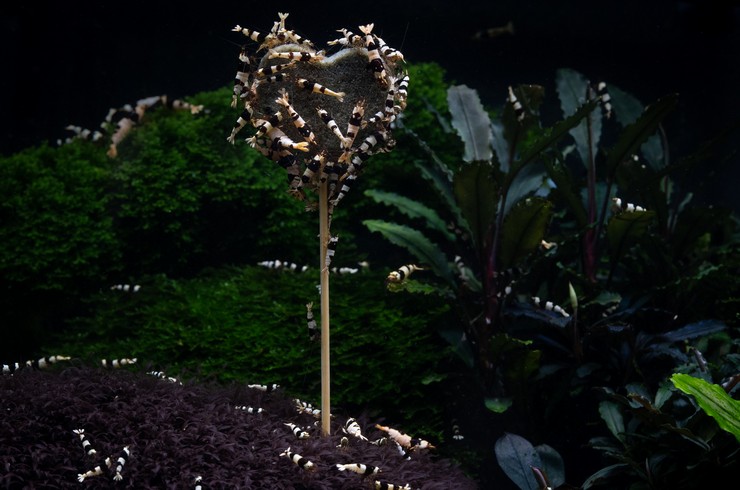 A filter, compressor, and thermostat must be installed in the aquarium.

The stability of water parameters should be strictly monitored. Shrimp crystals are very sensitive to even slight changes in them, as well as to high concentrations of nitrogenous compounds. It is recommended to maintain nitrates at a level not higher than 20 mg / l. Once a week, it is necessary to change the water up to 20% of the volume of the aquarium.

The best option for keeping crystal shrimp is a species aquarium. However, it is not recommended to keep black and red crystals, as well as shrimps from different breed classes in the same container. Since these crustaceans belong to the same species, they can easily interbreed with each other, and individuals with the most unpredictable coloration are obtained.

Crystals get along well with shrimp cherries, Amano, filter feeders.
As for compatibility with fish, it is better to stop the choice on small peace-loving pets – guppies, zebrafish, neons, microreactors, small tetras, and irises. It is not recommended to settle crystals with cichlids (even calm scalars), losses among shrimps are unlikely to be avoided. 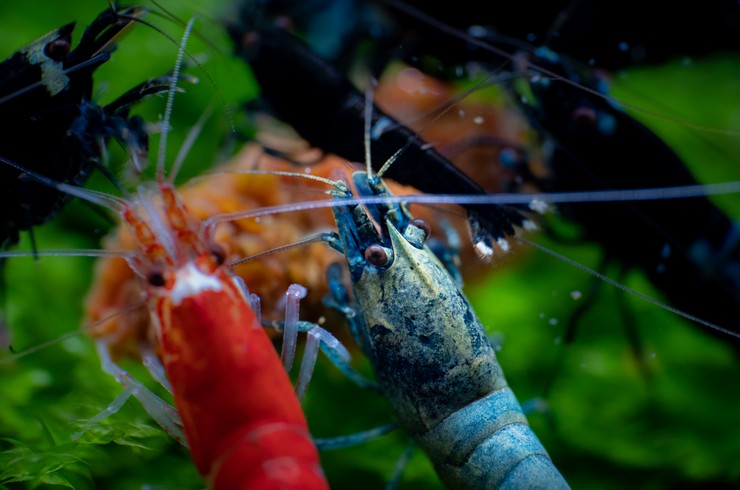 The basis of the crystal shrimp diet is algae. Small “crustaceans” are constantly in search of food, searching stone by stone. It is not recommended to overuse protein foods (most live and frozen foods). Shrimp has no way to digest and assimilate it in large quantities.

Poor nutrition leads to the loss of white crystals. It becomes greyish yellow or transparent. Therefore, it is better to opt for high-quality dry shrimp food. The Tetra Crusta range is a complete and nutritious food for all types of shrimp and other crustaceans. You can choose the shape of sinking sticks or granules. The feed quickly sinks to the bottom, where it becomes available to shrimp. Due to the special structure, they do not muddy the water. Contains selected proteins and plant components for comfortable digestion and maintaining immunity. Natural color boosters will make your pets even brighter.

Overfeeding should be avoided, it is desirable that everything is eaten in 30-60 minutes. Be sure to arrange a fasting day once every 1-2 weeks.