A significant part of cichlids native to America is large in size. Keeping such fish requires spacious aquariums, which are sometimes quite troublesome to look after. Nevertheless, this does not stop fans of cichlids at all, because the magnificent appearance and high intelligence of the fish completely pay for all the difficulties. The diamond cichlazoma is very popular among large predators. We will talk about it in our article.

Diamond cichlazoma (Herichthys cyanoguttatus) is a freshwater ray-finned fish from the Cichlid family. It is one of the most beautiful aquarium fish. But the large body size and pronounced aggressiveness determine some specific conditions of detention.

It is worth mentioning that the last major revision of the cichlid taxonomy practically “destroyed” the genus Cichlazom. Many species, including the heroine of the article, were assigned to other systematic groups. But the historical name “cichlazoma” is firmly entrenched for this species, it is under this name that you are most likely to find fish on sale.

These cichlids will become a real decoration of the species aquarium. Contain them singly or in pairs.

The diamond cichlazoma is distinguished by its high intelligence. For example, she is able to recognize her master. The parental instinct is well developed in fish: while the female protects the clutch, the male protects the territory from strangers.

An important plus is that diamond cichlazomas are easily bred at home.

The diamond cichlazoma belongs to large aquarium fish. The length of her body in suitable conditions can reach 30 cm but usually does not exceed 20 cm.

The main pride of this cichlid is its body color. The main background is gray, with numerous bright blue spots that flash brightly at a certain angle of illumination. This shine resembles the shine of a precious stone, it is not for nothing that this cichlid was called a diamond.

On the sides of the body of adults, two spots are clearly distinguished: one in the middle of the body, and the other at the base of the caudal fin. Young cichlazomas have intermediate spots. 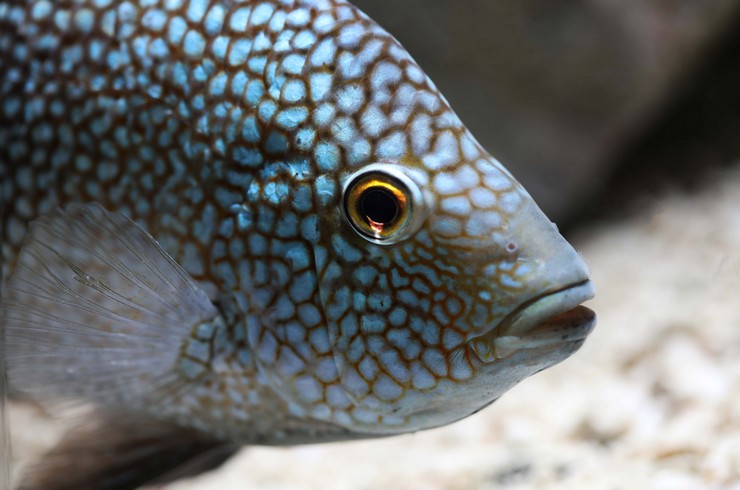 Sexually mature males develop a characteristic fatty build-up on their heads, especially if the male is dominant. Females are smaller than males in size.

The head has large eyes and a mouth with fleshy lips. Breeders have obtained forms with a shortened body.

The Diamond Cichlid is the only cichlid native to the United States. Its habitat includes rivers and lakes of Texas, as well as the territory of northeastern Mexico. It is now acclimatized in central Florida.

Diamond cichlazoma is found in well-warmed rivers, prefers dense thickets of aquatic vegetation and areas with sandy soil, in which it looks for food: worms, insects, crustaceans. Do not disdain and parts of plants.

To keep a diamond cichlazoma, you need an aquarium with a volume of 200 liters or more. It must be equipped with a lid to avoid accidental jumping out of fish.

Diamond cichlazomas are lovers of digging, so it is best to use a thick layer (up to 10 cm) of sand or small pebbles. For the same reason, it is useless to plant live plants with fish. Most of them will be eaten or dug up. It is allowed to use hard-leaved species (for example, anubias), planted in separate pots.

The best decorations for decorating an aquarium with diamond cichlases are large rounded stones and a couple of snags. Leave as much space as possible for swimming. Shelters don’t really matter, but a few larger shelters are better organized. 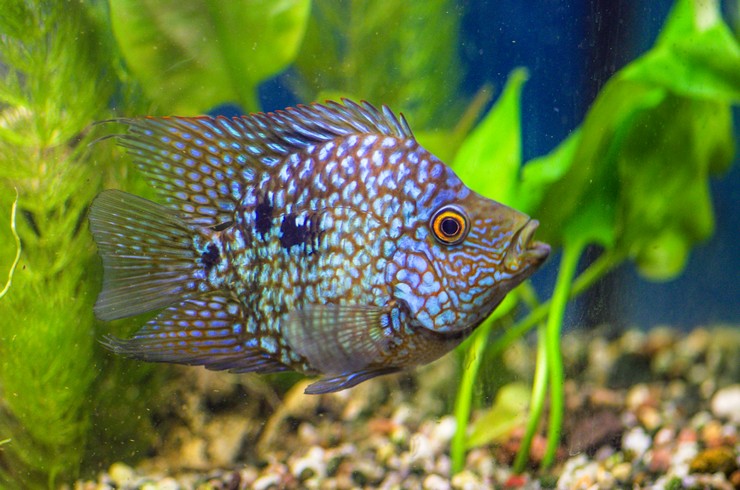 All decorations in the aquarium must be firmly fixed. Cichlazomas are very strong fish that can attack decorative items and even break some of them. Fragile equipment (for example, glass thermostats) must be reliably protected from predators.

Special attention should be paid to filtration. You will need a powerful external filter and a powerful compressor. Water changes are required once a week (up to 20% of the volume). Be sure to add Tetra AquaSafe to fresh tap water before adding it to the aquarium – it will instantly make it safe for fish life by removing chlorine and heavy metals. You can choose any lighting. Fish feel comfortable in moderate to bright light.

Diamond cichlazoma is characterized by an aggressive disposition. There are often cases when the neighbors in the aquarium are ruthlessly destroyed. Therefore, a species aquarium would be an ideal choice. Sexually mature males will arrange battles, in this regard, it is better not to add them to each other.

An interesting fact, but young cichlazomas are timid in nature. Sometimes so much that they suffer from more active neighbors who eat food faster. But everything changes with age. Pronounced territoriality begins to appear in fish, any strangers approaching the territory of the cichlazoma will be immediately attacked. This behavior is especially pronounced during the spawning period. Although sometimes there are “balanced” fish that get along with proportionate species.

Black paca, brocade catfish, synodontis, etc. can be taken as cohabitants for a diamond cichlid. Other cichlids are conditionally compatible with this species. If such a neighborhood is planned, then you need to take care of a suitable volume of the aquarium and its zoning. It was also noted that fish growing in an aquarium from a young age are more loyal to each other. 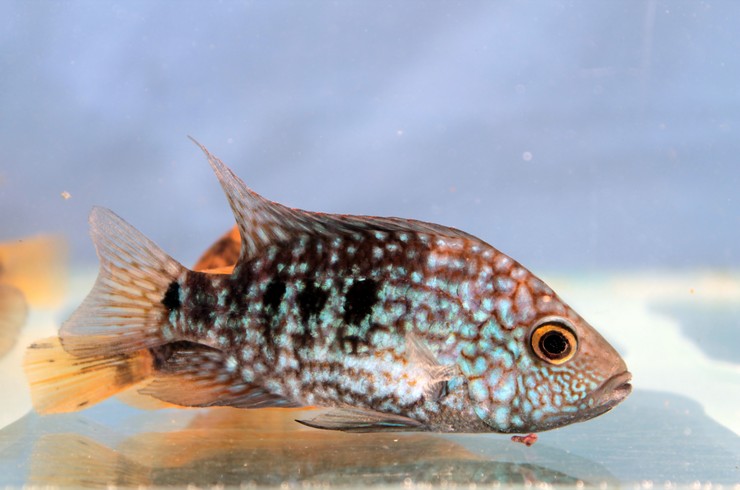 The content of diamond cichlazoma with goldfish or small tropical species is completely excluded.

In natural conditions, the diamond cichlazoma is not particularly picky about food. She equally eats various invertebrates and small fish, and plants. At home, it is necessary to limit feeding the cichlazoma with live and frozen food, since they are unbalanced, can become a source of infection, and also quickly spoil the water in the aquarium.

Do not feed cichlids with warm-blooded meat, such as beef. The high-fat content can lead to serious diseases – digestive disorders and obesity – since these substances cannot be absorbed by the fish.

Quality dry cichlid food is ideal for the daily feeding of diamond cichlids. They willfully provide the fish with nutrients, and the vitamins included in the composition will strengthen health. The good digestibility of the feed ingredients helps to reduce the amount of fish waste, and therefore, the water in the aquarium will stay clean longer.

Tetra Cichlid Sticks are a well-proven universal food for all types of large cichlids in the form of floating sticks. It is also recommended to feed the diamond cichlazoma with herbal feed, for example, Tetra Cichlid Algae Mini. The high content of spirulina algae will fully satisfy the cichlazoma’s need for vegetable protein.

It is best to feed the fish in small portions several times a day. It is important not to overfeed the fish and make sure that no excess food remains in the aquarium.